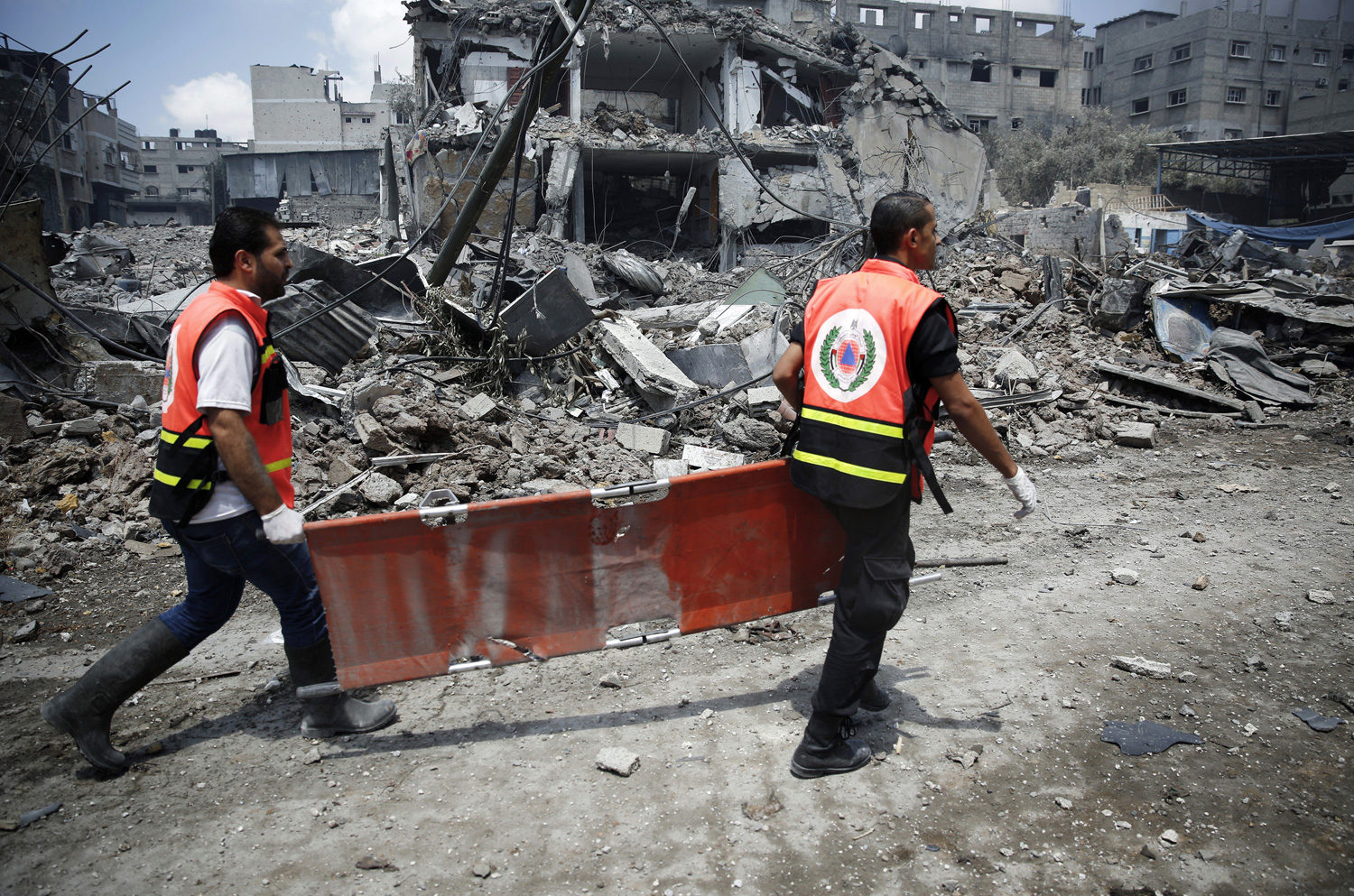 Palestinian medics carry a stretcher through the Shejaia neighborhood, where 50 Palestinians were killed on Sunday by Israeli shelling during fighting in Gaza City July 20, 2014 (Reuters/Finbarr O'Reilly)

Gaza City—>Two small bodies lie on the metal table inside the morgue at Gaza’s Shifa hospital. Omama is 9 years old. Her right forearm is mangled and charred and the top half of her skull has been smashed in. Beside her lies her 7-year-old brother. His name is not certain. It might be Hamza or it might be Khalil. Relatives are having trouble identifying him because his head has been shorn off. Their parents will not mourn them—because they are dead too.

All of them were killed in Shejaiya, one of Gaza’s poorest and most crowded neighborhoods, which came under a brutal and sustained assault by the Israeli military today.

“They dropped shells on our heads,” says Lotfy al-Banna, a resident from the neighborhood who fled early Sunday morning. “Everything is burnt down.”

It marked the bloodiest day in a blood-soaked conflict. Nearly ninety people were killed, sixty of them in Shejaiya alone, bringing the death toll in Gaza since the assault began to 425, 112 of them children, according to the Palestinian Health Ministry. More than 3,000 people have been injured.

Thick black smoke billowed up from Shejaiya throughout the day, darkening the sky. Falling bombs could be heard every few seconds. Drones buzzed overhead, and the occasional crackle of machine gun fire rang out.

The attack began around 9 pm and lasted well into late afternoon the following day. Tanks and artillery rained barrage after barrage of shells on the neighborhood, firing indiscriminately, according to multiple residents. Missiles slammed into apartment blocks. Ambulances could not get in. People say they waited for hours yet no one came to help. They say they were too afraid to put their heads out of the window to see what was happening around them. Some bled to death in their homes.

The streets of Shejaiya were strewn with the dead.

“I saw eight people lying dead on the ground, thee children and five elderly men” says Ayman, a resident who was evacuating his family to safety. Ilham Abu Qubos, another resident, says she witnessed similar scenes. “Death is everywhere in the streets.”

Some ambulances did eventually brave the shelling to try and rescue people. But one took a direct hit, killing the paramedic inside. A TV correspondent was also killed in Shejaiya. (A day earlier the Israeli government’s press office sent an email warning that Hamas “has frequently exploited journalists as human shields” and confirming that “Israel is not in any way responsible for injury or damage that may occur as a result of field reporting.”)

Eighty-year-old Said Abu Gomez said he decided to evacuate after his neighbor’s house was destroyed. Leaning heavily on his cane he shuffled through the streets, aided by his son, who attached a white flag to a long pole and held it aloft as they tried to make their way to safety. “This is the third time they do this to us,” he said.

By 10 am on Sunday the few residents left in the neighborhood were streaming out. Women carrying small children scrambled onto trucks and pushed their way into passing cars in panic to try to get away. A scene of chaos and terror.

The people fleeing the Israeli onslaught brought little of their belongings with them. Some were barefoot. Some carried a blanket or pillow. Most carried nothing at all. The United Nations refugee agency says the number of displaced is now at 81,000. Earlier on Sunday the number was 63,000.

There were people wandering the streets all over Gaza City. Young men gathered in clusters on sidewalks. Families with herds of small children walked and rested and walked again. Many made their way to Shifa hospital, Gaza’s place of sanctuary. Hundreds arrived packed in cars, on horse-drawn carts and on foot. They sought refuge in a place for the dead and wounded.

People wandered the halls of the hospital looking for their relatives, then they looked in the morgue.

“Those of us who worked in Shifa can say that last night was the worst night of our lives,” says Dr. Mads Gilbert, a Norwegian doctor at Shifa. He has come to Gaza many times to provide medical assistance, including during the previous two Israeli assaults in 2008/2009 and 2012.

“Israeli impunity is a huge medical problem,” Gilbert says. “Every single dead child and adult, and all the injuries, all the amputations, are one hundred percent preventable. This is a man-made disaster. Cynically planned and brutally executed by the government of Israel.”

The United Nations converted more of its schools into makeshift shelters. At the Zeitoun Preparatory School in Telal Hara more than 1,000 people arrived within the space of an hour when they opened their doors at 6 am. Many were driven over from Shifa, courtesy of a private bus company.

“The children are very afraid, they are terrified of the shelling,” says Nahed al-Zaeem who arrived at the shelter with her husband and five children. “Our houses have been turned to dust.”

Israel and Hamas agreed to a two hour humanitarian ceasefire, facilitated by the Red Cross, to allow casualties to be removed from the area. It didn’t last long. Israel resumed shelling after it said its troops came under fire. Ambulances sped in anyway to retrieve the dead and wounded, many of whom were covered in grey dust. Bulldozers were sent in to try and rescue survivors from the rubble for their homes.

One teenager walked in to see the remains of his house. Its facade had been ripped away. Two floors were completely demolished. He picked up rock after rock from the ground and flung them at a parked car. Consumed by rage, he tried to destroy the little that remained untouched.

In the evening, news broke that 13 Israeli soldiers had been killed overnight in the fighting. The Israeli military’s highest one-day death toll since the 2006 war in Lebanon. Some in Gaza speculated that the brutal shelling of Shejaiya was a retaliation. “This was Israel’s revenge on the people of Gaza for the soldiers that were killed,” said Shadi, a displaced resident of the neighborhood.

Israeli Prime Minister Benjamin Netanyahu, addressing a news conference in Tel Aviv, vowed to continue the military offensive. “We are undeterred. We shall continue the operation as long as is required,” he said.

The Israeli army sent messages to residents of the northern towns of al-Atatra and Beit Hanoun warning them to leave the areas immediately: “We will strike with an iron fist.”

Around 11 pm, the armed wing of Hamas, the al-Qassam Brigades, announced they had captured an Israeli soldier. Chants of “Allah Akbar” filled the night sky and celebratory gunfire rang out across Gaza. Israeli naval ships fired artillery shells at the muzzle flares.