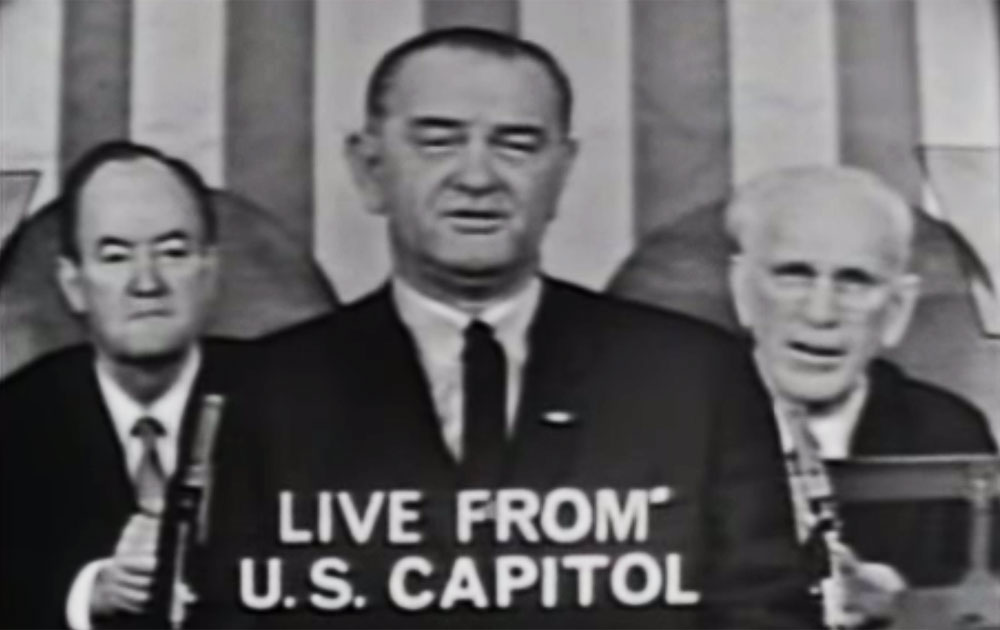 Broadcast of Lyndon B. Johnson's “We Shall Overcome” speech, given during the civil-rights movement shortly after events in Selma, Alabama.

The Almanac entry of March 7 featured the attack on voting-rights protesters in Selma, Alabama, that has come to be known as “Bloody Sunday.” A week later, President Lyndon Johnson stood before Congress and demanded a voting-rights bill to sign, borrowing for the occasion the civil-rights movement’s anthem, “We Shall Overcome.” This magazine’s next issue carried an editorial, “The Nation Aroused.”

The President’s speech of March 15 was splendid—but it was not his alone. The impetus, the passion, came from an aroused nation. During that whole week of crisis, Mr. Johnson strove to keep from being overrun by the Selma protest. He no more intended to present a voting bill at this time than President Kennedy intended to present a civil rights bill prior to Birmingham. But when he sensed the mood and the peril, he came to life. He threw aside the politician’s instinct to temporize and jumped to the head of the parade. Many an American who had been given little cause for pride in his country in recent years felt the elation of belonging to a great people and beholding leadership worthy of the occasion….

But there is a danger too. No one who heard the President can doubt his sincerity when he spoke of the “crippling legacy of bigotry and injustice,” but neither can we forget the lateness of his conversion. It is true not only of the President but of each one of us, that it is easier to perform a virtuous act and to feel the glow of righteousness than to work tirelessly toward a goal that is far from won. The Negro community must keep up the pressure, and their new allies must not allow themselves to relapse into the inactive good will that is really a form of neutrality. The Southerners who have suffered shame and disgust as the outrages perpetrated in their states must now make a stand, difficult and dangerous as it may be, against the…higher-ups who stand behind malefactors in the guise of officers of the law. The Northerners who have stood aloof while mobs attacked Negroes moving into all-white neighborhoods have an equally urgent mission. There is no feeling so transitory as indignation that is not followed by sustained effort. Crucial weeks and months lie ahead.