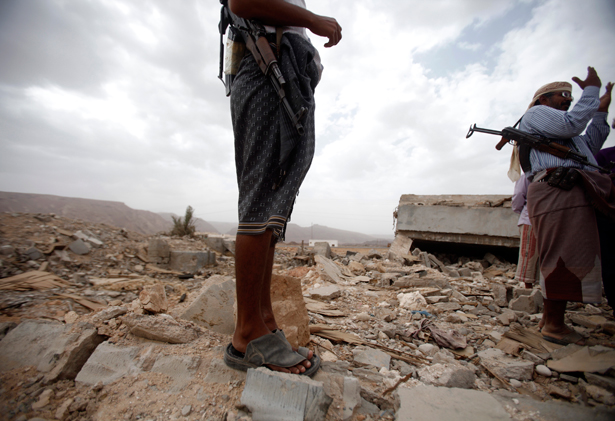 The ruins of a house in Yemen where Abdulrahman al-Awlaki, the son of Anwar al-Awlaki, was killed by a US drone strike. (Reuters/Khaled Abdullah)

On January 15, Warren Weinstein, an American aid worker, and Giovanni Lo Porto, an Italian citizen, were killed by a US drone strike at an Al Qaeda compound in Pakistan, where the two were being held hostage. Their deaths were revealed by President Obama in an April 23 press conference in which he expressed profound regret, took “full responsibility for all our counterterrorism operations,” and pledged a review. The president appeared somber, forthright, even grief-stricken. But his display of emotion, however heartfelt, conceals a more disconcerting reality. To date, not one US official has been held accountable for any civilian casualty in any drone strike anywhere.

Securing justice for these victims would be an arduous process, not least because there are so many of them. Since 2004 in Pakistan alone, US drones have killed between 423 and 962 civilians, at least 172 of them children. In Yemen, between 65 and 96 civilians have been killed by drones since 2002, including eight children, among them a 16-year-old US citizen, Abdulrahman al-Awlaki, the son of Al Qaeda leader Anwar al-Awlaki. Abdulrahman’s death occasioned no presidential mea culpas, although former press secretary Robert Gibbs later said that the teen should have had “a far more responsible father.”

These civilian casualties are described as “inadvertent,” and that may often be the case. Neither Weinstein nor Lo Porto was an intended target. The CIA didn’t know they were at the compound, because, in fact, it didn’t know the identity of anyone present. They were killed, along with two US members of Al Qaeda, in a “signature strike,” part of the program that allows the CIA and the Pentagon to launch missiles at groups of men who appear to be engaged in activities associated with terrorism. Officials are not required to disclose how many of the drone strikes are signature strikes, nor are they required to track how many people are killed, combatants or otherwise. In this context, then, the civilian deaths are very much purposeful: the inevitable cost of conducting “targeted killings” under such conditions. As Congressman Adam Schiff put it, “To demand a higher standard of proof than they had here could be the end of these types of counterterrorism operations.”

Thousands of miles away, no missiles rained down to kill 25-year-old Freddie Gray in Baltimore, but his death was nearly as abrupt and indiscriminate. On April 12, Gray was chased and tackled after running away from police, who discovered a switchblade on him and took him into custody. The police nearly severed his spinal cord during the arrest; Gray died a week later, becoming yet another of the dozens of black men killed by cops in recent years.

There are, of course, profound differences between the “war on terror” and the police state, but one commonality stands out. The best available data on civilian deaths from drone strikes comes not from the CIA, but from the independent Bureau of Investigative Journalism, while the FBI data on people killed by police is appallingly incomplete, leaving advocates to make educated guesses based on media reports and other methods. Far from being accountable, the state machineries of death—one using drones and missiles, the other using bullets and batons—are not even interested in their own body counts.

It’s unclear whether the protests now rocking Baltimore will help achieve a measure of justice for Freddie Gray. Similarly, it’s unimaginable that those responsible for Warren Weinstein’s death—who surely include US officials—will be brought to justice. But accountability and justice should mean an end to both abusive policing and the secret drone program, which only create more terror.