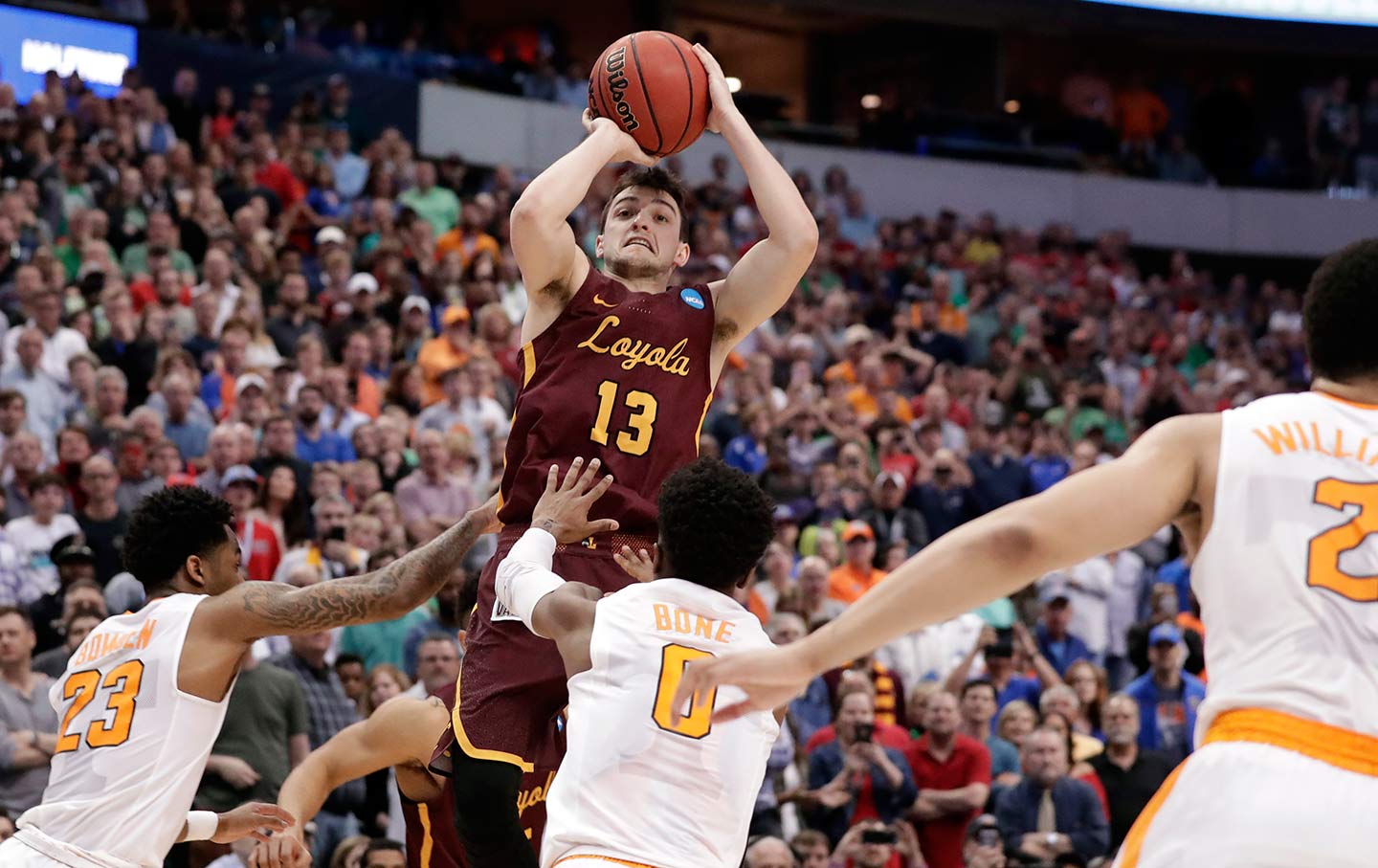 In epic March Madness fashion, Loyola of Chicago University has made the Sweet 16 of the NCAA tournament with two wins, both secured stunningly on the final shot of the game. The Ramblers’ Cinderella season is now the story of spring and a nation’s eyes are on the Jesuit school, with its much-touted mission toward social and economic justice. But there is something decidedly impious that lurks beneath the hoops.

Last week, I wrote about how the Ramblers’ shiny success is shaded by student unrest: anger over both the funding a new $18.5 million practice facility and an incident of campus police brutality, caught on camera, against two students who had been protesting this new arena. Campus police said that one student was interfering with the arrest of two men illegally selling tickets. The gap between these actions and the school’s Jesuit values are why the student movement has called itself #NotMyLoyola.

But that’s not all. On April 4, non-tenure-track faculty are threatening to strike because of poor pay and benefits as well as no access to tenure-track positions. They have been attempting to organize a fair contract since 2016, after voting to be represented by Service Employees International Union, Local 73. But in the words of art professor Sarita Heer, speaking to the Loyola Phoenix, “The bargaining process here has been ridiculously slow. The university has been trying the old tactic of ‘stall, stall, stall,’ and they think we don’t have teeth. And now with authorizing the strike vote, I think they’re going to sit up and take us seriously and try to move this process faster.”

The non-tenure-track professors held a press conference where they announced their intention to strike and the #NotMyLoyola movement joined with them to express their solidarity. Paloma Fernandez, one of the people manhandled by campus police, said: “We are here today in solidarity with the graduate student union and faculty union. Many of our faculty are living on poverty wages and we support them taking action to win real improvements on campus because we know that when our professors are cared for, we students benefit in the classroom.” Now #NotMyLoyola has called for a student walkout on April 4 both against racism and in solidarity with their professors.

In addition to the non-tenure-track professors, there is also labor unrest among the graduate-student teachers, who are organized in a labor union that Loyola has refused to recognize. The school is leaning on its Jesuit heritage as a cover for why it isn’t negotiating with the union. In a statement to Inside Higher Ed, school spokesperson Steve Christensen touted increased stipends for grad students, claiming that the move reflects “our commitment to Jesuit, Catholic values and a fair and just academic environment.” He also said (in language that would sound very familiar to the NCAA and its critics) that the grad-student teachers, are “fundamentally students, and therefore, do not qualify as ‘employees’ within the meaning of the National Labor Relations Act.”

Meanwhile, as these dramas roil the campus, the basketball players delivering last-second thrills are, of course, being paid nothing. Their coach, Porter Moser, however, is looking at a raise that could up his salary from $420,000 to over a million dollars a year. School President Jo Ann Rooney told the Chicago Tribune, “Porter talked about building a program, and part of that is making sure we’re paying folks competitively without sitting back and we’re always reviewing that. He is a valuable asset. We’re hoping to keep him and his coaching team he’s developed for as long as we possibly can because it’s a great fit.’’

As one campus organizer said to me, “There’s a lot of excitement on campus about what the team has done so far, and their success has really shined a spotlight on the university in a big way. But winning basketball games obviously doesn’t do anything to address the underlying problems of a university administration that doesn’t respect the voices of its own students, faculty, and staff.”

What we are viewing is a collision between the purported values of a school and the reality of the modern neoliberal university: spending millions on athletic facilities and using campus police to clamp down on dissent, all while making a play for the kind of NCAA basketball manna that can erase all the red ink. This is corrupt and corrosive. It creates a situation at any school, no matter its religious morals and no matter its mission, where the money changers aren’t only inside the temple: They’re running it.