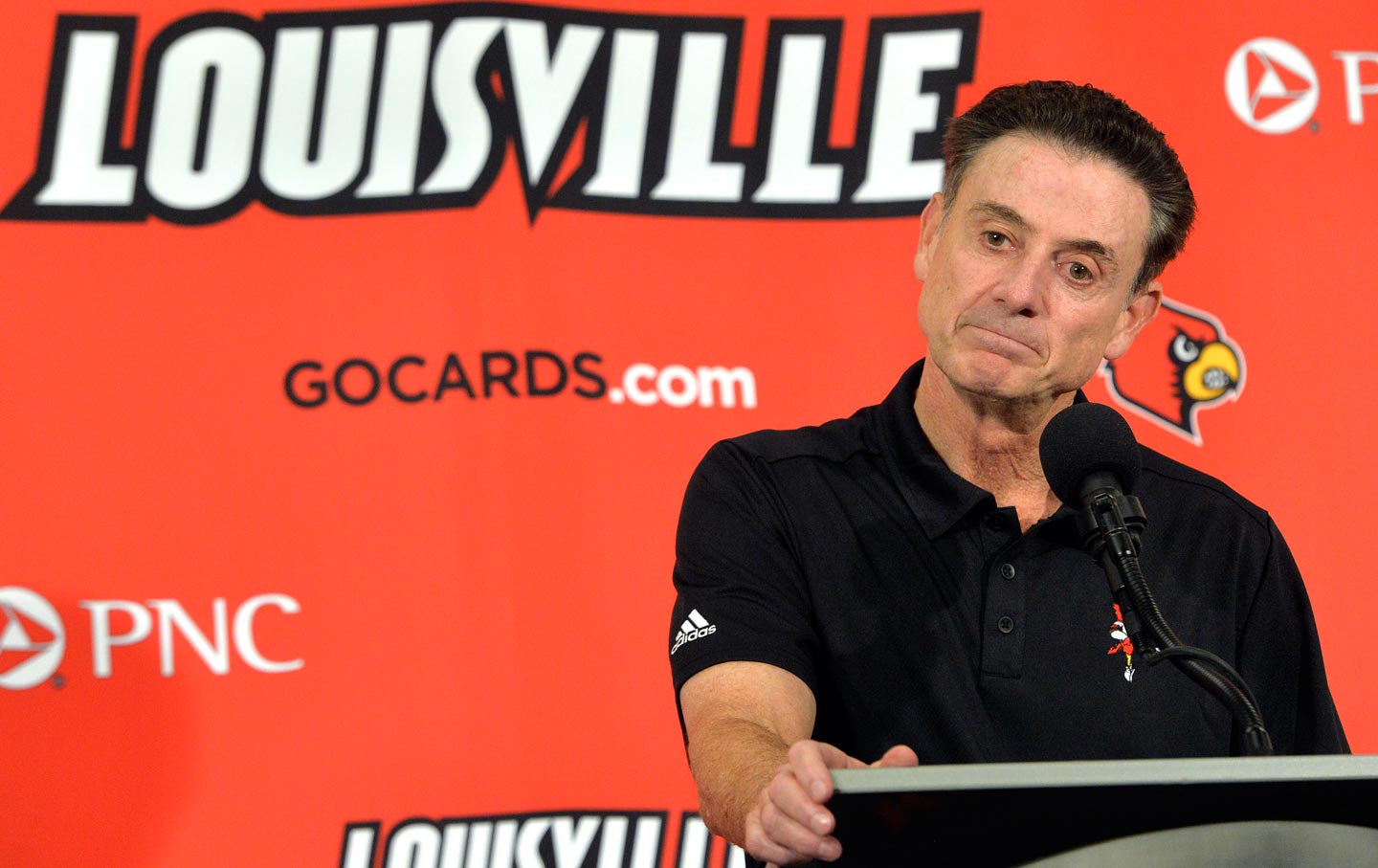 On revelations that the University of Louisville basketball program may have paid a self-described “Louisville Madam” to supply recruits with strippers and sex, the reactions have congregated into two camps: moralizers and cynics.

The moralizers are bleating that this scandal has forever tarnished the innocent joys of amateurism and the Louisville Cardinal Way. (Side note: why does every program need a damn “Way”?) Some also insist that they strongly doubt Louisville’s Hall of Fame head coach Rick Pitino knew that from 2010-2014, one of the athletic dorms doubled as a bass-pounding party zone. In fact, he’s the real victim here.

Then there are the cynics. They’re fashionably bored by all of this. They shrug, saying that these kinds of things happen everywhere and this is really just another day at the office in the putrid world of the NCAA. Money, women… just currency by different names in the gutter economy of college athletics.

But both of these reactions miss the most urgent issue—the NCAA’s political economy of misogyny. There’s a lesson in this scandal if we’re willing to learn it. It starts with Louisville Basketball, whose use of transactional sex as a method of recruitment produced results and made a small number of people very rich. Louisville has now been at the top of Forbes Magazine’s list of most valuable NCAA hoops programs for four consecutive years. Pitino won an NCAA title in 2013 alongside a new contract that pays him well in excess of four million dollars a year. The connective tissue before us between the political economy of amateurism and misogyny has been written in a neon script. It also shines a harsh light on how the use of women as currency links many of the public relations crises that plague sports and the psychological pain that plagues ex-athletes.

For all the talk about recent high profile sexual assault allegations and convictions involving “student-athletes” at top athletic programs, for all the talk about violence against women in various leagues (with Johnny Manziel being the latest face of this), and for all the talk about the stratospherically high rates of divorce for former pro athletes, there is very little effort to see instances like this one at Louisville for what they are—critical pieces of this puzzle of scandal and suffering.

We are talking about high school recruits—kids—presumably sixteen or seventeen years old, away from home and buzzing with hormones. They visit Louisville and are told by people in power and players they’ve seen play on national television that in big time college hoops, women are just another item to be passed under the table; the spoils of stardom. As one former player told ESPN’s Outside the Lines, an assistant coach “would give us the money, just the recruits. A bunch of us were sitting there while they danced. Then the players left, and the recruits chose which one [of the dancers] they wanted.” It is like a how-to guide for “Warping Young Men and Inducting them Into the Great Alienated Army of Athletic Manhood.”

In order to learn something from this, we have to lose both the Helen Lovejoy moralizing and the guy-talk cynicism. These are teenagers being conditioned to see women as things; commodities given by men of authority to be exchanged for their services. When this toxic level of entitlement transitions into sexual assault or violence against women, when their own relationships become a twisted wreck once the cheering has stopped and their old coaches have commenced to suck another 18 year old dry, the masters of sports shrug their shoulders. They dwell on a player’s individual pathology, his family or his background. They comment about everything except this inherently corrupt world of fake amateurism. “Louisville Madam” Katina Powell’s assertion that she called the NCAA when she considered going public and was hung up on by “some young white guy” was the least surprising part of this story.

Yes, it’s “the system” that produces misogyny and violence against women, but identifying it as “the system” is not the same as throwing up our hands and saying there is no personal accountability. If we can agree that it is “the system,” then we should tear it down brick by hypocritical brick—along with those who proudly prop it up.