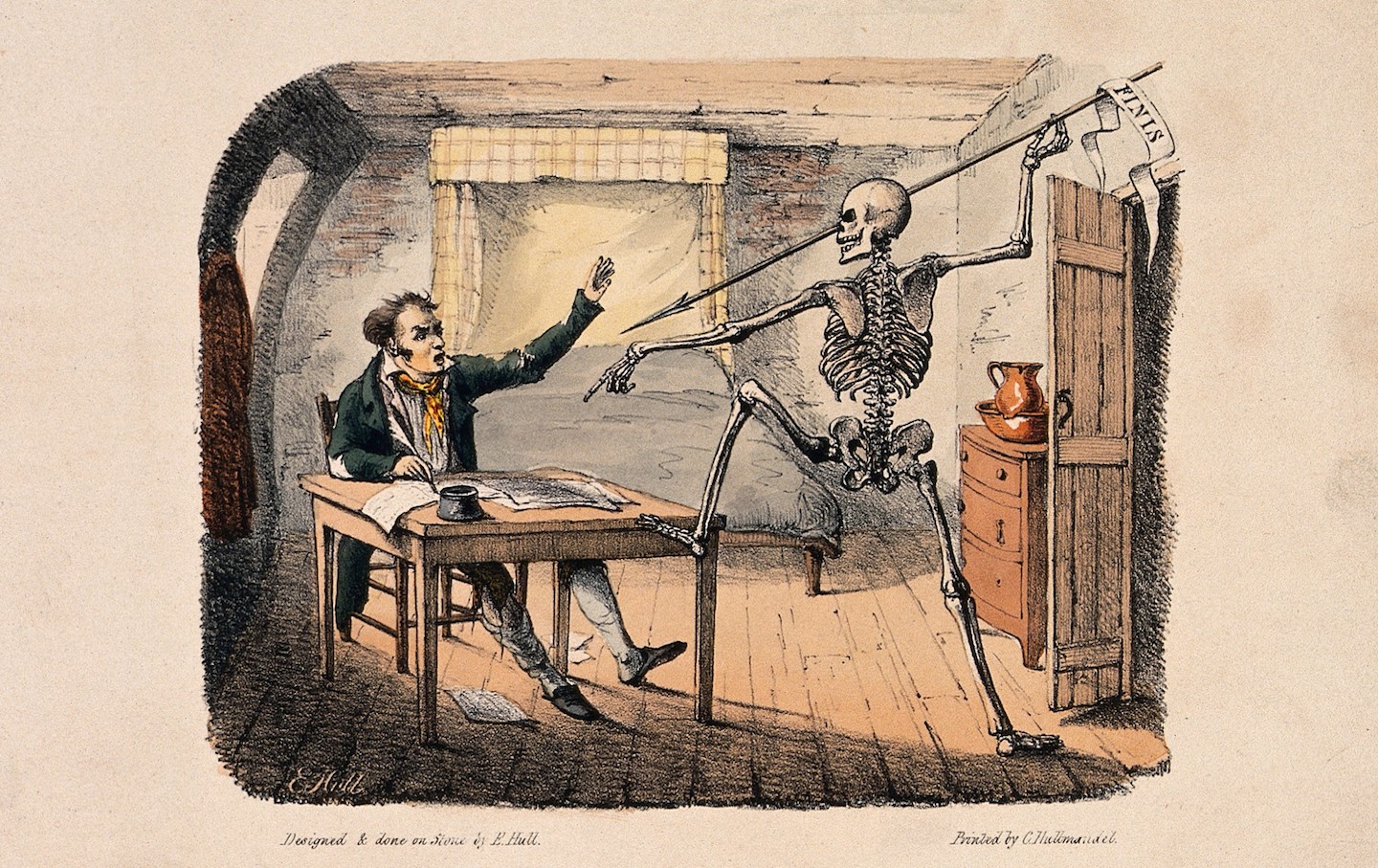 “Death finds an author writing about his life,” 1827. (Lithograph by Edward Hull via The Wellcome Collection)

Lucy Ives’s Loudermilk is an aughts period piece: It takes place between 2003 and 2004, during the start of the Iraq War. Troy Loudermilk—rich kid, Abercrombie hot—has enrolled at the Seminars, an Iowa Writers’ Workshop–like MFA program. But he doesn’t write. That gig belongs to Harry Rego, his debilitatingly anxious working-class friend from undergrad. In a present-day version, Harry might write Loudermilk’s application to USC as an independent subcontractor for Varsity Blue. Harry’s nascent poetry skills are derived from a Writing Poetry for Dummies–like guide, which directs him to use language that “[means] more than one thing” and phrases he finds in the local newspaper. The poems, written by Ives, a graduate of the Iowa Writers’ Workshop poetry MFA program, are inserted throughout the book.

Loudermilk: Or, The Real Poet; Or, The Origin of the World

The dudes could have picked other lines of work to scam, but poetry seemed easy to sneak into. “Do you have any idea how many people are into this?” Loudermilk asks Harry. “Somebody could totally run this scene.” In exchange for writing poems in secret, which Troy passes off as his own, Harry gets a split of the program’s stipend while Loudermilk cruises female undergrads. After the Sessions, Loudermilk plans to ping-pong between free bags of poem money: “There was significantly more lucre than you would think in terms of fellowships and grants waived fees…. It would be stupid easy to get in and get out.”

Loudermilk just isn’t rich, though; he’s an heir, which makes Loudermilk what you might call inherited wealth lit—a modern-day version of the 19th century bourgeois novel’s dramas of inheritance. Loudermilk’s father, an “ex-military man” known as the Cleaner, had “made good in the 1960s and early ’70s providing infrastructural triage in locales the United States had not explicitly invaded” and became “alarmingly wealthy during Bill Clinton’s second term.” What does “triage” mean here? The line reads like a child asking an arms-dealing parent, “What do you do?” The parent lies, and the child swims in the results, a boorish aggregate of surplus value and other people’s blood. But Loudermilk isn’t stressed that his trust fund will end; he’s scared that it won’t. Is Loudermilk ashamed of being rich? Does he think that making his own money is the only way to be his own person? We don’t know; in October of his senior year, after Loudermilk proclaims that the Cleaner “had really crossed a line” and falls into an uncharacteristically deep depression, Harry infers that “the Cleaner had probably offered to pay for the rest of Loudermilk’s life.”

With the first round of stipend money, Loudermilk moves them into an apartment smashed next to an undergrad frat house where initiates are shot with BB guns. It’s a raw deal, but it saves Harry from doing the thing he hates most: speaking. Harry’s hatred for his voice borders on dysphoria. “The voice is ugly and sometimes shrill and sometimes bass and otherwise ludicrous, but the major thing about it is that it is not even his.” Loudermilk is obsessed with talking, and if they are together—always—then Loudermilk can speak for Harry. This engenders another dissociative relation: Harry hates Loudermilk’s voice; he just hates it less, despite knowing that the voice is an excuse. The larger problem is that he “dislikes and fears” other people and wants to avoid them. Loudermilk tracks Harry’s quest to find his voice by learning to write, speak, and assert himself. But it’s also a narrative in defense of narrative.

As with Ives’s debut novel, 2017’s Impossible Views of the World, Loudermilk satirizes a particular creative industry: While Views was set at a pseudo–Metropolitan Museum of Art, Loudermilk looks at poetry and academic creative writing. In both books, the markets judge a cultural product’s financial value, but its real (historical, cultural) value is always uncertain, necessitating an informal economy of gossip, jealousy, and clout. Members of the scene trade takes on a cultural product’s worth, and Ives excels at tracking the market-accelerated narcissism of small differences.

Ives’s protagonists—Harry in Loudermilk and Views’ Stella, a lower-level curator at Manhattan’s Central Museum of Art—are shy and observant, repulsed by the social climbing around them and harangued by a clout-chasing inverse. For Stella, it is senior curator Frederick Lu, who wants the museum to collaborate with WANSEE, a multinational seeking to privatize the global water supply and establish WANSEE-sponsored satellite museums. In Loudermilk, the nemesis is Anton Beans, who likes poetry but isn’t sure what it is for; he fills this void of uncertainty by humping up the career ladder, a caricature of the preprofessional MFA candidate.

In the afterword to Loudermilk, Ives writes that the novel is neither satire nor realist fiction; it is a libertine novel. “The libertine,” according to her, “hates society’s laws and loves the roiling dynamics of nature.” This archetype “transgresses in the service of freedom—a freedom the libertine believes is perfectly natural and therefore good.” Loudermilk is less interested in binge-drinking, group sex with corn-fed undergrads, and the Seminar stipend than in unmitigated freedom. He doesn’t know what he wants but wants to keep wanting without restraint.

Ives is invested in the sociological detail characteristic of a social novel, although Loudermilk isn’t a social novel. It isn’t a fully libertine novel either. In a literary critical flourish, she combines elements of libertine novels, realist novels, social novels, inherited wealth lit, postmodern novels, period pieces, poetry, satire, and revenge plots. Why does this book have so many genres? An answer can be found in two of Ives’s recent critical essays, the first on French theory’s American reception, the second on the social novel. Both pieces examine a disconnect between these genres of writing and their intended audiences. Loudermilk—and Loudermilk—result from this disconnect.

In a 2018 Baffler essay, “After the Afterlife of Theory,” Ives gives an intellectual history of French critical theory’s American reception, ending with its co-option by segments of the alt-right, as MAGA stans use postmodernist claims about the constructed nature of truth to peddle fake news. She is not anti-theory; she is against theory that doesn’t serve its pedagogical function, namely, to give readers “the tools…they need to see connections between their studies and the world.” Theory—and genres of writing that employ it, such as Beans’s poetry—that fails to do this is remiss, especially considering how much undergraduates pay to learn it, anyway. Ives ends her essay with this declarative: “The cost of a B.A. is more distracting and enervating to the citizenry than any form of relativism.” Her critiques of theory production are essential to Loudermilk. That Harry, who has no background in poetry, hacks his way into the country’s most prestigious poetry MFA program is both scandalous—if he got in, then can’t anyone?—and appropriate—people without the academic credentials to do poetry should be able to get in. More often, however, they don’t.

A year later, Ives wrote another essay for The Baffler, “Orphans of Dickens.” Similarly concerned about a genre of writing and its pedagogical function, the piece asks why nonfiction literature has dramatically superseded fiction sales since Donald Trump’s election. “Information’s stock rose; artifice suffered.” People want to understand why the world is so bad, so they turn to nonfiction, plump with data. She gets why, but if people want to understand “what’s going on,” she argues, they should read fiction, too. Narrative is, after all, a sense-making device whose ability to string events into meaningful progressions feels especially necessary in an increasingly non-narrative world. (“So much of the media we consume is non-narrative, in spite of the existence of presumably linear ‘timelines.’”) Fiction is already reshuffling to meet this rising need for social context plus narrative, hence the resurgence of the social novel, a genre invented by Charles Dickens out of “an ambition to move between world-historical events and the mundane dramas of intimate life,” as Ava Kofman put it in a recent review of Olivia Laing’s Crudo, a novel that is supposed to feel like reading tweets. 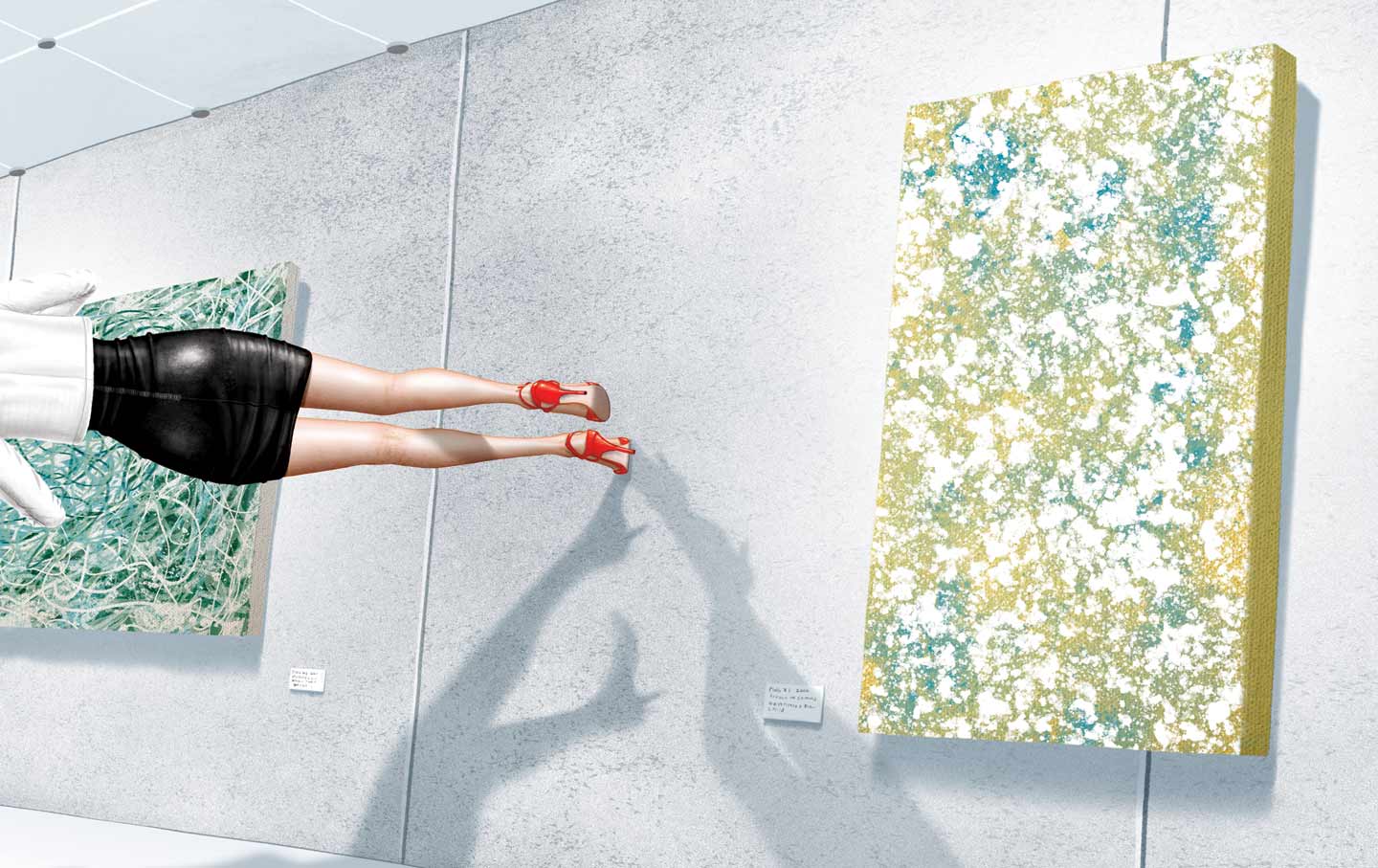 Like Kofman, Ives points out that when fiction simply mimics nonfiction, hoping to absorb its truth value via osmosis, the results are unsuccessful. She critiques Gary Shteyngart’s Lake Success—about a hedge fund bro who flees his New York City life on a cross-country Greyhound—for the novel’s failure to examine the power structures behind its sociological detailing, as if the details themselves made the work automatically good. Fiction with a misapplied nonfiction-y style makes the same error as the tweet format in which the same declarative statement is repeated in a grave tone: assuming that adopting a specific genre form automatically endows your words with reality. For Kofman, shafting narrative for non-narrative because the latter is supposedly always more realistic “bodes ill for the readers and critics who still look to the novel as a respite from, and not simply an extension of, the relentless stream of social media.”

Loudermilk, in contrast, is a defense of narrative contra nonfiction’s and theory’s claims as the only good forms of writing—claims that have escalated under Trump. Loudermilk’s plot wraps up neatly because the point of narrative is to make points. Loudermilk and Harry’s agreement is broken, although Loudermilk, with his scammy charisma and trust fund, will be just fine, even when the Great Recession hits five years later. (The tax loopholes that generated his trust fund are not unrelated to the financial crash.) Harry finds his voice, but becoming “the real poet” doesn’t resolve the problems of the market-driven poetry world he is about to willingly enter.

While Loudermilk succeeds in making good on the arguments outlined in her Baffler essays, it does not totally succeed as a novel, although—unlike Crudo or Lake Success—it falters for more conventional reasons. Harry and Loudermilk can feel like tropes. Each is mostly defined by a single desire (for freedom and isolation, respectively), which makes their dynamic and relationships with other characters feel predictable. Her combinations of genre tropes never fully cohere. Each narrative flourish is so anxious to prove its right to exist as a narrative flourish in a narrative work that the book is always pulling the reader out to point at what’s going on.

Still, Loudermilk is worth reading. It’s a funny and cutting novel whose critiques of inherited wealth and its effects on culture in the aughts will keep being true until a full redistribution of wealth, beginning with reparations, occurs. Until then, Harry will fester with avoidance, Loudermilk will be horny, and Beans will continue his lifelong plot for empty career success, while the rich, like the Walton family of Walmart, for example, pour their money into trusts ($9 billion as of 2011) to avoid having to pay an estate tax. They’re thieves but also quite charitable. They support the arts. In 2011, Walmart heiress Alice Walton founded a museum, the Crystal Bridges Museum of American Art, in Bentonville, Arkansas. Maybe next time, she will found a poetry MFA program—or just send her child to one.