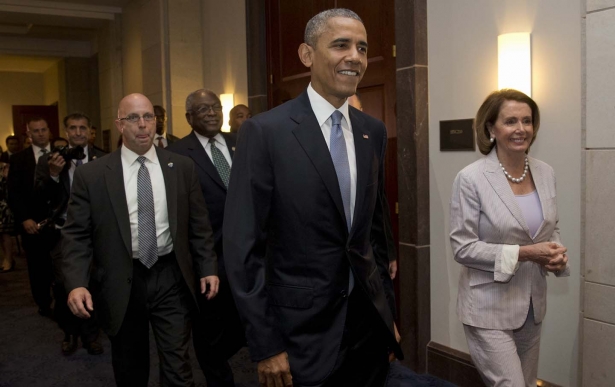 The House of Representatives threw President Obama’s trade agenda off the rails Friday, dealing Obama arguably his biggest defeat as president—and one that was fueled by sustained opposition from the party’s left flank.

There’s one more vote coming Tuesday before we can officially say fast-track authority is indefinitely dead.

Here’s what happened: The House considered three bills Friday. One was a generally noncontroversial customs enforcement bill. Another was the actual fast-track trade-authority legislation. (You can read the case against that bill here.) And the third was a bill providing trade-adjustment assistance to workers who get screwed over by trade deals. Republicans have long detested trade-adjustment assistance as a wasteful big-government program, and Democrats were not happy with the way it was being paid for.

The way House Speaker John Boehner structured the process along with the Senate, all three bills had to pass or else the entire package would not advance. (If you’re a gambler, think of it like a three-item parlay bet.)

Progressive Democrats who oppose fast track feared it would pass with mainly Republican votes alongside a small number of Democrats, but they sensed an opportunity on the must-pass trade-assistance bill—since relatively few Republicans would back the legislation, it would be much easier to kill by withholding Democratic votes. And if trade assistance goes down, so too would fast track.

And that’s exactly what happened. Minority leader Nancy Pelosi took the floor early Friday afternoon and said that explicitly defeating trade assistance “is the only way we will be able to slow down fast track.” When the votes rolled in shortly thereafter, the trade-assistance bill failed with 302 votes against it and only 126 in favor.

It’s worth stressing here how much progressive organizing had to do with this defeat. President Obama personally appeared in Congress at the last minute Friday morning to appeal to Democrats one more time, on the heels of crashing the congressional baseball game the night before. But Pelosi and Democrats remained unswayed, and in her speech, Pelosi instead credited the work of activists holding members to a “hot stove” back home.

But fast track isn’t quite dead yet. Boehner moved on to the fast-track and customs bills anyway, both of which “passed,” though fast track only got two votes more than it needed. The package still won’t advance without trade-adjustment assistance—but Boehner scheduled a revote for Tuesday.

This will be the final showdown. Democrats would need to triple the yes votes on the bill for it to pass, which seems unlikely, given that Pelosi explicitly embraced the idea of “slowing down” fast track. The administration and its allies will cynically beat them up for blocking assistance to workers displaced by trade deals, despite the clear strategic preference by Democrats to stop fast track. But if progressives hold strong, then fast track is over for now. (The other option would be for over a hundred more House Republicans to flip and back trade assistance, but that seems unlikely in the extreme, especially since the powerful Heritage Foundation is scoring this as a key vote.)

Liberal activism created a vote on Friday that few people saw coming. If liberals keep up the pressure for four more days, there will be no discernible path forward for either fast-track or the TPP.