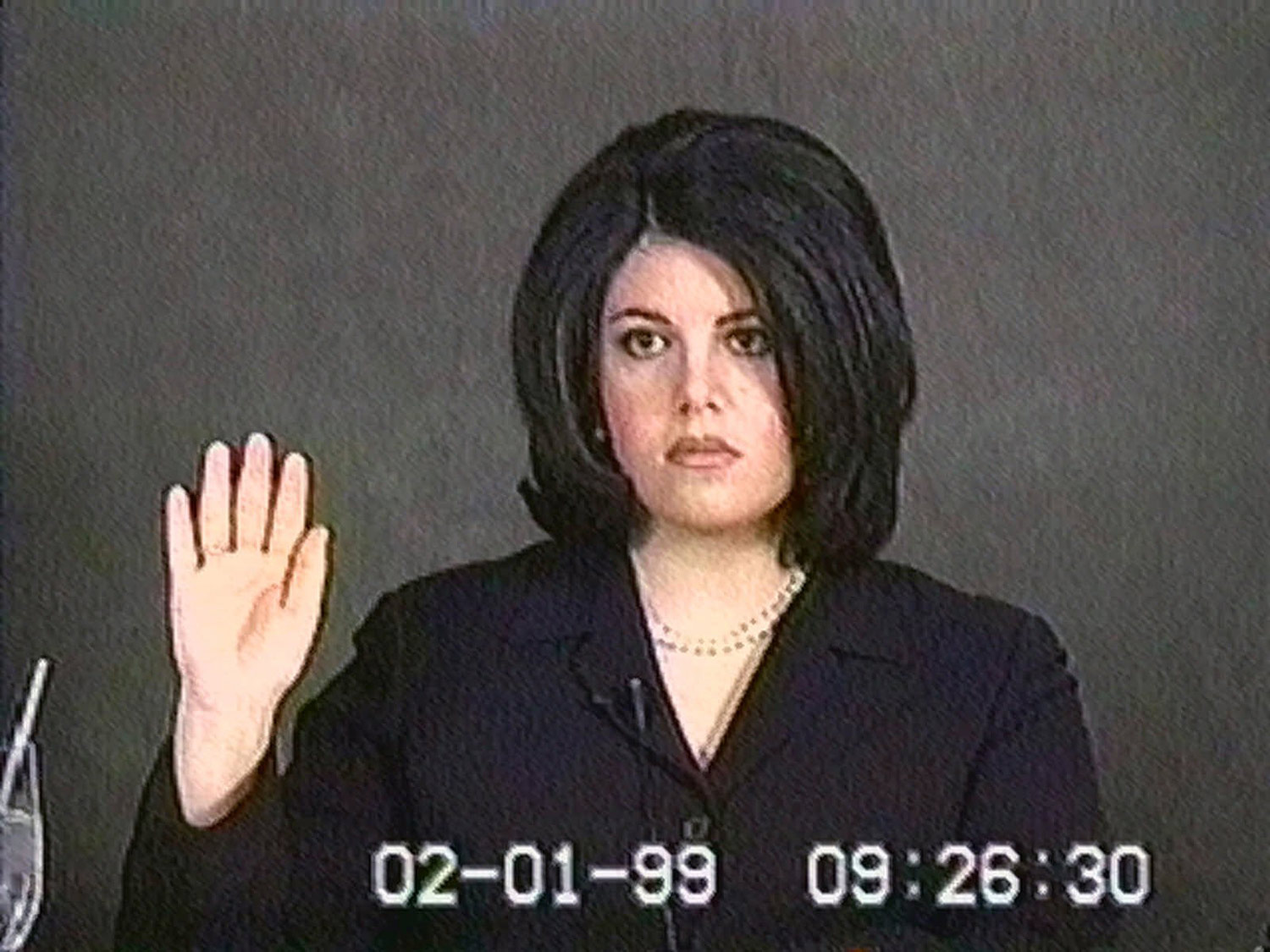 Monica Lewinsky being sworn in for her deposition on February 1, 1999  (AP Photo/APTN)

There are probably more than a few women, safely cloaked in anonymity, who are deeply frightened by Monica Lewinsky’s new essay in Vanity Fair. Lewinsky, after all, is far from the only political ingénue to have sex with a powerful man—and while most of these affairs presumably remain private, her story is a reminder of what can happen when a once-obscure person is involuntarily dragged into the spotlight, her secrets bared to a jeering global audience. Any past or present paramour of the players-to-be in the 2016 election must know that she could become a national punch line. Worse, as Lewinsky’s piece suggests, there may be no coming back from the experience. We still make it much harder for women to transcend sex scandals than men.

Clinton’s reputation has largely recovered from the affair that sparked his impeachment trial; Lewinsky’s never did. She got a master’s degree from the London School of Economics, hoping to do communications for a charity, but has been unable to get a full-time job. “Because of what potential employers so tactfully referred to as my ‘history,’ I was never ‘quite right’ for the position,” she writes, noting that the only offers she’s gotten have been those that would market her notoriety. She’s watched her friends marry and have children, their lives moving forward while hers has not. “With every man I date…I go through some degree of 1998 whiplash,” she writes. Imagine, at 40, being defined by a blowjob you gave at 22. Lewinsky is scarcely exaggerating when she compares herself to Hester Prynne. Her life has been deformed by slut-shaming, a phrase that had not yet been coined when she was catapulted into infamy.

Lewinsky believes that feminists let her down, and she has a point. “I sorely wished for some sign of understanding from the feminist camp,” she writes. “Some good, old-fashioned, girl-on-girl support was much in need. None came.” During the scandal, the primary feminist argument was about sexual harassment, about whether or not the affair was consensual. In their zeal to argue that the dalliance wasn’t exploitative—and thus that Clinton hadn’t committed a public transgression—some feminists went so far as to argue that Clinton was Lewinsky’s victim. “Here’s a cute, sexy, young president, he’s known to have had a lot of sexual affairs,” said Erica Jong during an all-female discussion of the scandal that The New York Observer convened at Le Bernardin. “He might stimulate the fantasies of all the young women who work in the office. And particularly the ones who are a bit father-obsessed and obsessed with older men and feel neglected. So, it’s possible that Clinton has had many more such attacks than we even think.” Attacks! As if the poor president only capitulated under the intern’s siege. There was little room, back then, to see Lewinsky as both an active agent in the affair and a person whose dignity and privacy deserved protection. Lewinsky dwells on this conversation in her piece; clearly it still stings sixteen years later.

Ultimately, though, feminist hypocrisy isn’t what ruined Lewinsky’s life. Far more damaging has been the failure of feminists—despite great effort—to dismantle the double standard that made Lewinsky such an object of derision in the first place. Unlike Lewinsky, men hardly ever get dragged into sex scandals without committing some kind of betrayal, if only of their spouses, and yet they have a much easier time finding redemption. There’s Clinton himself, a silver-haired eminence astride the world of global philanthropy. If Anthony Weiner hadn’t blundered into a second round of publicity over his sexting habit, he might be mayor of New York City right now. Louisiana Senator David Vitter survived a prostitution scandal, replete with rumors of a diaper fetish, and is currently running for governor. (The madam in that case committed suicide after being sentenced to prison.) Jim McGreevey, the New Jersey governor who resigned after an adulterous affair with his security adviser, Golan Cipel—who reportedly threatened to sue him for sexual harassment—was recently hired as the executive director of the Jersey City Employment & Training Program, a $110,000 position. And Lewinsky, who never cheated on anyone, who had no power to abuse, can’t get a job in PR?

True, things have changed since the late ’90s, when Lewinsky saw her name turned into a double entendre. Today, thanks to the rapid-response capabilities of online feminism, it would be much harder for mainstream journalists to get away with the cruel, casual insults about Lewinsky’s weight that were everywhere back then. Yet in other ways, the climate is even more unforgiving. Thanks to the Internet, less evidence than ever is needed before shoving someone onto the public stage. Camera phones have turned us into a society of paparazzi, and Twitter means that anyone with a dubious morsel of personal information about a suddenly notorious person can broadcast it to the world. Lewinsky, an expert on public humiliation, recognizes this. We’re caught, she writes, “in a feedback loop of defame and shame, one in which we have become both perps and victims.” If this is how we’re going to live now, we must at least give women the same chance to move on that we routinely offer to more culpable men.