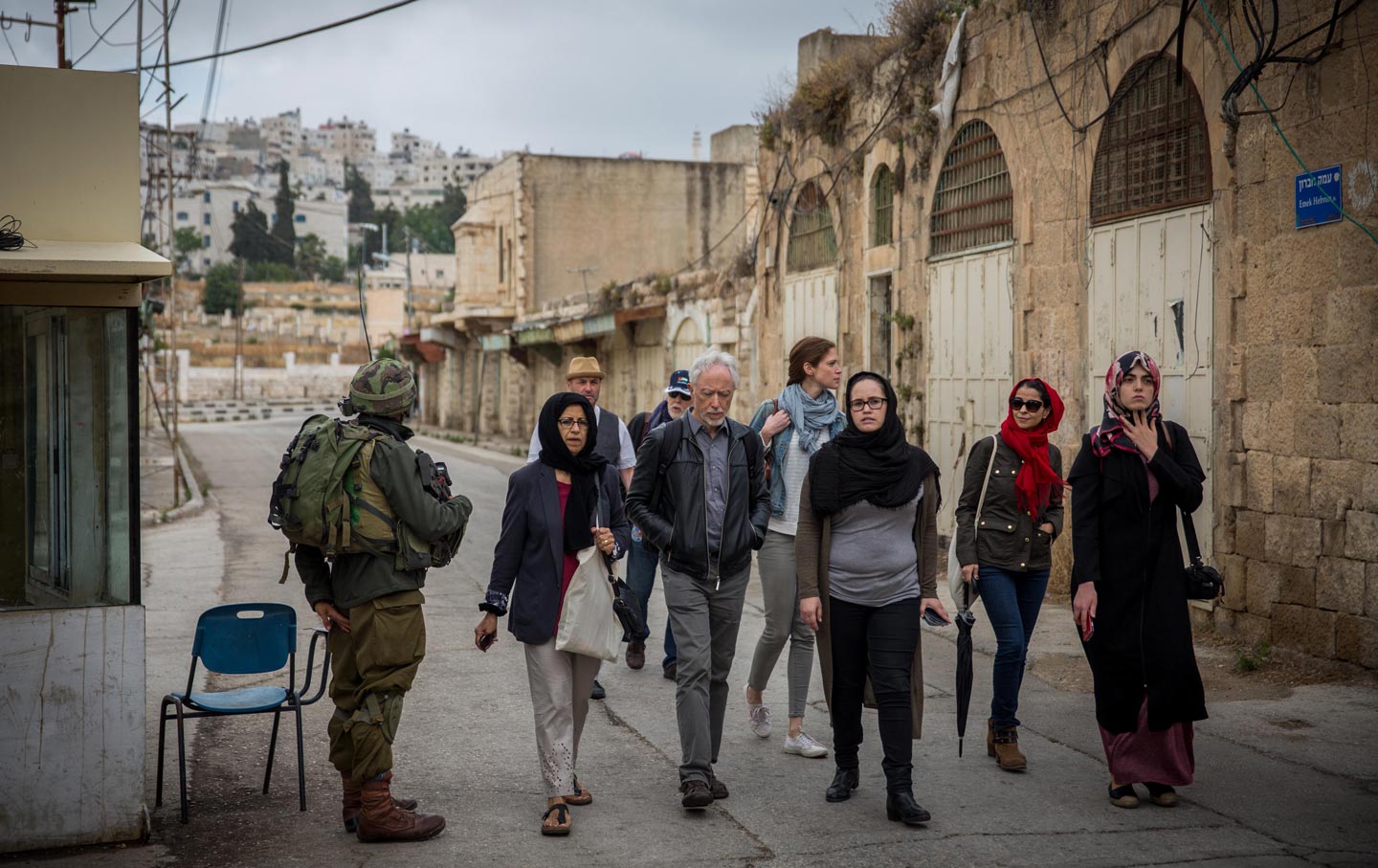 Festival participants walk through an area of Hebron inhabited by Israeli settlers on May 24, 2016. (Rob Stothard for The Palestine Festival of Literature)

“What’s the purpose of your visit?” the officer asked. The epaulets on his blue button-down shirt hung over his narrow shoulders. His eyebrows joined above the bridge of his nose.

“I’m here to give a reading.” I had come to Palestine with a group of poets and writers for a literary festival, with scheduled stops in Ramallah, Jerusalem, Bethlehem, Nablus, and Haifa.

The officer glanced at the line behind me. “How many are in your group?”

“How many US passports?”

He raised a suspicious eyebrow. “Everything is ‘I don’t know’ ?”

But I really didn’t know. I had met the other writers at a hotel in Jordan the night before, and it hadn’t occurred to me to count their number while we were on the bus from Amman to the Allenby border crossing, nor to ask how many were American. He swiped my blue passport in the machine, then looked up at me with surprise. “You were born in Morocco?”

Here we go, I thought. It had taken me 20 hours to travel from California to Palestine. I dreaded being deported by Israeli immigration, as had happened to some of my Arab friends. “Yes, that’s right.”

“My grandparents were born in Morocco.”

“Whereabouts?” I asked, grateful for the diversion.

“Casablanca,” he said. Then he looked at the screen again. “How old were you when you moved to the United States?” he asked. “Did you move with your parents or by yourself?… Is your husband American?… Are your children American?… Do you miss your husband and children?”

Then it occurred to me that I could ask questions of my own. “Your grandparents are from Casablanca, you said. Do they go back to Morocco for Hiloula?”

His face lit up with a smile. “You know Hiloula?”

“Of course.” The veneration of saints is part of Jewish Moroccan culture.

“Do you know this song?” He sang a few words in Hebrew.

I don’t think I got it right, but he nodded anyway. Then he typed a few words into a smartphone and held it up to the glass window. It was a YouTube video of Moroccan Jews dancing at a party. A minute later, he printed out my visa and handed me my passport.

When he insisted that he was a UK citizen, he was told, “Enta Falesteeni, khabeebi.” You are Palestinian.

Not a dozen steps behind me, another writer from our group stood waiting. His name was Ahmed Masoud, and he was traveling on a UK passport. But because he had been born in Gaza, he was taken to a special room where he was asked for his Palestinian ID and interrogated for several hours. There was no discussion of music for him, no YouTube videos or fond remembrances of distant lands, only more forms and more questions about the purpose of his visit. When he insisted that he was a UK citizen, like several other writers in our group who had been let through, he was told, “Enta Falesteeni, khabeebi.” You are Palestinian.

Ahmed Masoud was deported that afternoon. He was prevented from reading his work to audiences at the cultural center in Ramallah or walking through the Old City of Jerusalem or taking selfies by the beach in Haifa, the way all the British and American writers did that week. Instead, he was sent back to London.

I had gone to Palestine fully expecting to see occupation and degradation, but I had not expected to witness my own privilege so swiftly or so starkly. My birth in Morocco had made the Moroccan-Israeli immigration official see me for who I was, while Ahmed Masoud’s birth in Palestine had been enough to strip him of his individuality, enough to make the immigration official label him a threat.

The next morning, at the Qalandia checkpoint, I was stuck in line while the soldiers argued with another writer ahead of me. There, at eye level on the blue metal railing, I saw white and pink stickers displaying the Ayat al-Kursi, a Quranic verse that Muslims recite in times of extreme fear or distress. Every morning, Palestinian workers line up to go through these metal cages, and there is never any guarantee they will make it through. I thought of the people who had put the stickers on the metal, to give themselves courage or to inspire it in others.

In the Old City of Jerusalem, I was walking down the street with the journalist Sharif Abdel Kouddous when policemen stopped us and demanded to see his passport. What was his crime? Nothing. They just didn’t like the look of him.

In Bethlehem, I saw the wall, an abomination that rises 25 feet and is covered with graffiti. One spray-painted message read “Happy Christmas From Bethlehem.” I was so busy looking up at the wall that I tripped on some empty tear-gas canisters.

In Haifa, which is within Israel’s 1948 borders, I saw a beach. I did not see soldiers.

In Hebron, I saw Palestinian shops with gates that had been welded shut by military order, and I strolled down a street where Palestinians are not allowed to walk, even if they live there. The families who still own homes on this street are forced to enter them from the rear, like servants in a segregated city of the American South. There were no signs warning about this rule, however. Signs can be photographed and distributed. Still, even in the absence of signs, the sight of a street in which the only people standing around are soldiers or settlers is indelible in my mind. I listened to a Palestinian activist talk about the extreme economic hardship brought on by store closures, and then I heard him say, “Despair is a luxury.”

Later, I saw the word “Hope” scrawled on a wall that led to yet another checkpoint.

Before leaving Hebron, I bought artwork on Shuhada Street, where shopkeepers had to put up netting to protect themselves from the trash thrown at them by settlers living in the apartments above. In some Native American tribes, dream catchers are used to to keep out bad dreams, allowing only the good ones to enter. But the black mesh that the shopkeepers had put up could not keep out the urine, bleach, or wastewater that the settlers sometimes dumped on them. The Palestinians in Hebron are locked in a nightmare. “Now that you have seen this,” a white-haired shopkeeper said to me, “tell the world about us.”