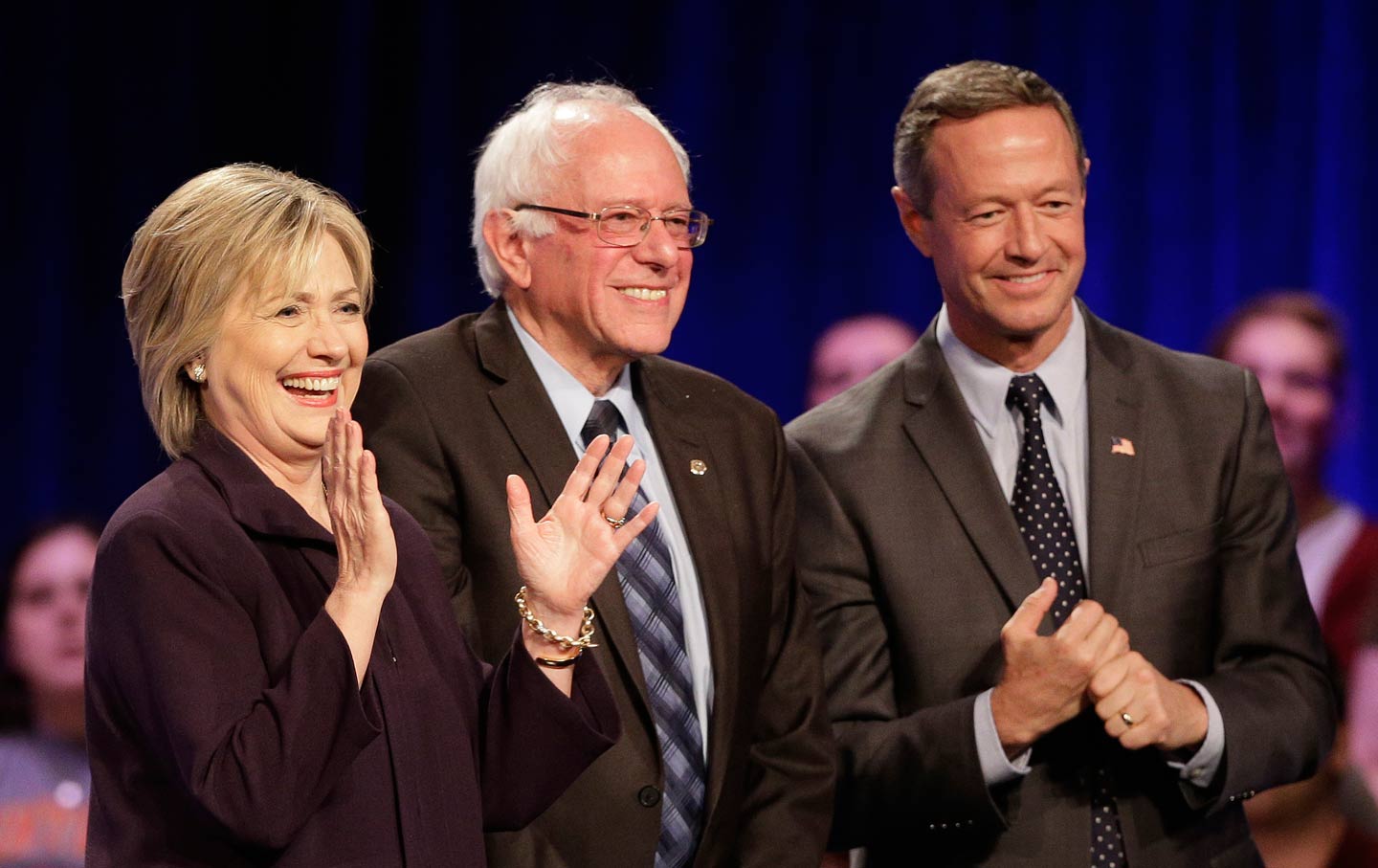 When Rachel Maddow interviewed the Democratic presidential contenders in South Carolina last week, she asked Bernie Sanders about voter suppression. The Vermont senator responded by decrying those who would erect barriers to voting as “political cowards” and proposed a go-big response: “we have got to pass legislation—maybe even a constitutional amendment that says that everybody in America who is 18 years of age, or older, is registered to vote. End of discussion.”

That was the boldest statement of the evening when the candidates sat down for one-on-one interviews with the MSNBC host. Yet Sanders is not alone in his concern. There is no question that former secretary of state Hillary Clinton and former Maryland governor Martin O’Malley are deeply concerned about the crisis that has developed since, as Clinton correctly notes, the US Supreme Court undermined the Voting Rights Act protections and sent “a message to leaders that they could begin to try to find new ways to interfere in the right to vote.”

O’Malley bluntly declares that “voting in America is becoming harder—not easier—thanks to a concerted effort by Republican activists to suppress the vote.”

So the candidates have areas of agreement regarding the crisis. Good. Now, let’s get some clarity regarding their plans for addressing it.

“Amazingly enough, we do not have in our Constitution the right to vote as a constitutional right.”—Bernie Sanders

This is a necessary discussion and moderators at the second Democratic debate tonight in Des Moines—and at future Democratic and Republican debates and forums–have a real opportunity to expand and clarify the discourse.

Americans need to know how engaged the candidates of both parties are with the most basic questions of democratic engagement, and how determined they are to address the issues that arise.

The discussion should include a consideration of a constitutional intervention to create a universal guarantee, as even the Voting Rights Act at full strength did not begin to provide all the protections that were needed for those seeking to cast ballots.

“Amazingly enough, we do not have in our Constitution the right to vote as a constitutional right,” Sanders explained after last week’s forum. “We leave it up to the states. That’s where I get passionately upset.”

It has gotten a lot of other people upset, as well. Ever since the Florida recount fiasco of 2000, civil-rights and voting-rights activists have been agitating for a substantial extension of voting rights protections—up to and including a constitutional amendment.

Establishing a constitutional right-to-vote guarantee is not a particularly radical notion. Countries around the world—from Germany and Japan, to Afghanistan and Iraq—have them (and they frequently record higher voter turnout for elections than the United States) The Universal Declaration of Human Rights, declares that “everyone has the right to take part in the government of his [or her] country…[through] periodic and genuine elections which shall be by universal and equal suffrage and shall be held by secret vote or by equivalent free voting procedures.”

Courts have signaled politicians that they can “find new ways to interfere in the right to vote.”—Hillary Clinton

Arguments can and will be made for narrower-yet-still-significant interventions at the federal, state, and local levels. And they ought not be dismissed casually, as the struggle for democracy should never make the perfect the enemy of the good. (In particular, attention should be given to the serious efforts by Congressmen James Sensenbrenner Jr., R-Wisconsin, and John Conyers Jr., D-Michigan, to renew the Voting Rights Act, as well as important proposals such as Congressman John Lewis’s Voter Empowerment Act of 2015, Congressman Matt Cartwright’s Time Off to Vote Act and Congresswoman Susan Davis’s Universal Right to Vote by Mail Act of 2015.)

Sanders is right when he says, “This is not a new idea.”

Congressmen Mark Pocan, D-Wisconsin, and Keith Ellison, D-Minnesota, have proposed a constitutional amendment that would explicitly guarantee the right to vote. The amendment proposal has attracted significant support from civil-rights and voting-rights advocates. Groups such as FairVote and Color of Change are enthusiastically on board, as are dozens of House members—including Congressman Conyers, the senior member of the chamber who marched with the Rev. Martin Luther King Jr. in the 1960s and championed the Voting Rights Act at the time of its initial passage.

The sponsors of the right-to-vote amendment do not expect immediate or easy approval of what should be seen as a common-sense proposal. “Nothing happens easily in Washington, certainly not a constitutional amendment,” admits Pocan. “But this is what we’ve got to do.”

“It is time to protect every citizen’s right to vote, once and for all.”—Martin O'Malley

Martin O’Malley has recognized that reality, saying that, it is time to “protect every citizen’s right to vote, once and for all.”

“Passing a constitutional amendment that enshrines that right will give U.S. courts the clarity they need to strike down Republican efforts to suppress the vote,” says the former governor.

Sanders has frequently expressed an openness to constitutional interventions, not just to protect voting rights but in order to overturn the Supreme Court’s Citizens United ruling and restore the ability of Congress and state legislatures to regulate campaign spending by corporate special interests. Clinton, too, has expressed an interest in a money-in-politics amendment.

So the groundwork has been laid for a great discourse, and perhaps for some honest debate about differences of opinion regarding strategies and approaches for making real the promise of democracy.

It’s vital to make voting rights a front-and-center issue for 2016. And the Des Moines debate is a great place to begin.