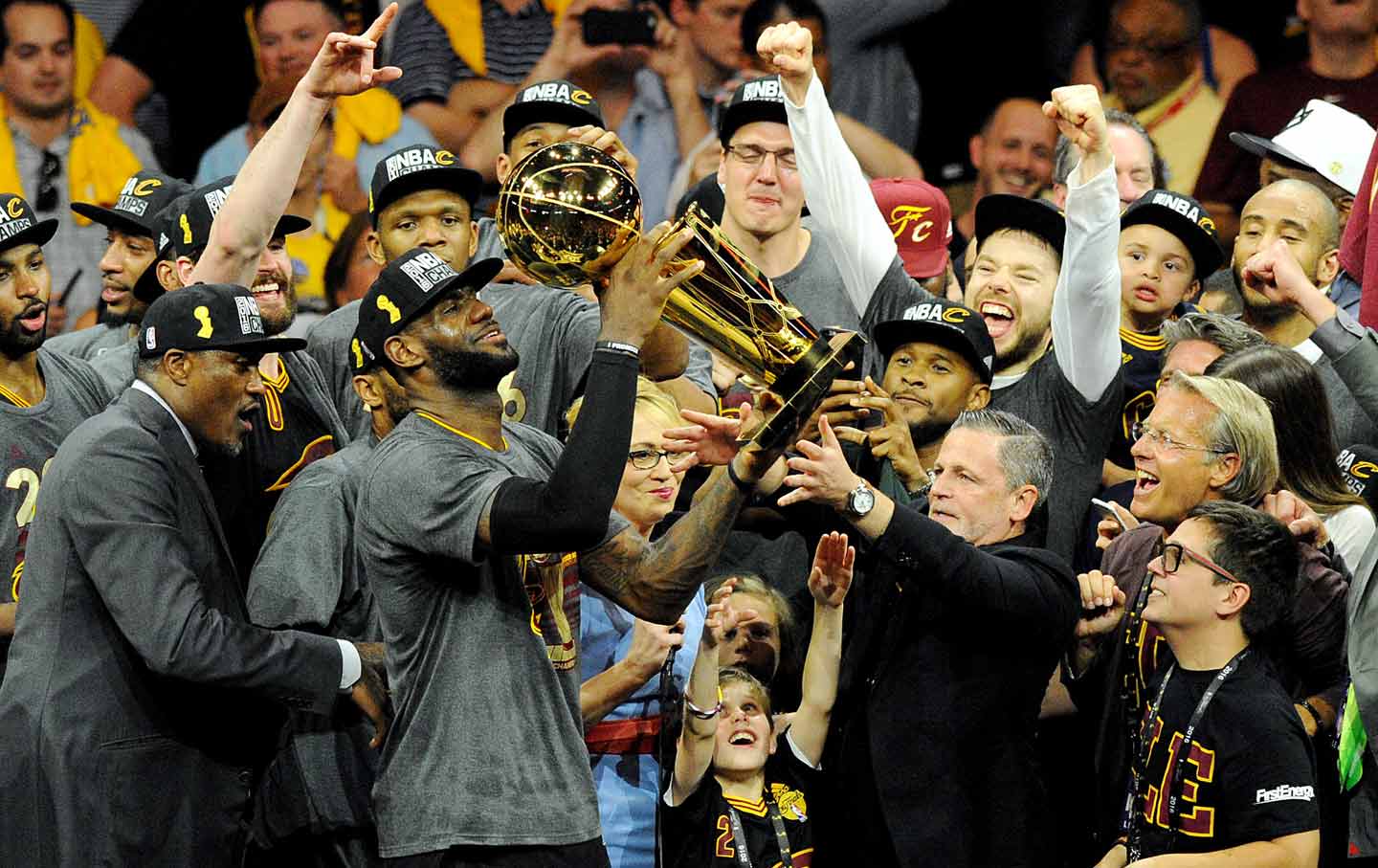 After watching LeBron James lead the Cleveland Cavaliers to the franchise’s first championship over the Golden State Warriors, I believe that we just witnessed the closest facsimile possible to the great Muhammad Ali’s upset victory over heavyweight champion George Foreman in the 1974 Rumble in the Jungle. This will be sacrilege in some circles, but please bear with me.

Like the 25-year-old George Foreman, Golden State was considered young, sleek and unbeatable. Coming off a record setting 73-9 season, they were the present and the future of the sport. Like 32-year-old Muhammad Ali, LeBron James, now 31, was being talked about as if the game had passed him by. A consensus had clearly developed among talking heads that his best days were done. Some were even asking if he would—after his team’s inevitable loss—just pack up and leave Cleveland, despite all the promises he made after returning home to Northeast Ohio in 2014 to win one for his own hard-luck community that hadn’t seen a title in any team sport since 1964.

Then the Cavs went down three games to one, and it looked to be over. No team in finals history had ever climbed out of a similar hole. The Cavs and LeBron James had endured a great deal of punishment, just as Ali did in those early rounds in Zaire. Every rainbow three-pointer from Golden State felt like one of those Foreman body blows that held the power to dent a heavy bag. Then, bang: LeBron James popped off the ropes and hit back with a vengeance. This is not to say he was practicing the Rope-a-Dope like Ali, playing possum as a point of strategy, but he certainly woke the hell up. Maybe it was his dust-ups with Warriors defensive demon Draymond Green. Maybe it was the other Golden State players mocking James with tweets and jibes, as if the series was already over. But whatever lit that fire, James was done lying back against the ropes and put together the best three-game stretch in NBA Finals history, with two 41-point outings in games five and six, and then becoming the third player ever to have a triple double in Game 7: 26 points, 11 rebounds and 11 assists. Along the way, he became the first player in any playoff series ever to lead both teams in points, rebounds, assists, blocks, and steals. And then, just like Ali circling Foreman as “Big George” finally fell to the mat, he gave us a moment for the ages, a chase-down blocked shot with the game tied at 89 that will now forever be known—if Twitter is to be believed—as LeBlock. It was more than a basketball play. It was high art. It was LeBron, just like the allegedly over-the-hill Ali, laying claim to being the Greatest.

The other reason this victory recalls the Rumble in the Jungle is the undeniable social context swirling around the series—namely, all that this Cavaliers title means to Cleveland, beyond just bragging rights and a parade. No city has endured more seasons without a championship, and to this town, the broader symbolism of their sports drought has been brutal. That last title in 1964 took place right before decades of deindustrialization, population flight, and pain. As Cleveland-born journalist Scott Raab, a man who still has his ticket stub from that 1964 NFL title game in his wallet, said to me, “This was a city of champions. It wasn’t a city that anyone made fun of. It wasn’t ‘the mistake by the lake.’ It was a pretty powerful steel town. Heavy union. People with families and ‘womb to tomb’ type jobs. That ended with the 1960s. And it was like our sports teams were the mirror for all that.”

One championship and one epic showing by one all-time great player does not magically undo the damage to the psyche of a city gutted by neoliberal pirates for decades, just as one victory by Muhammad Ali over George Foreman did not bring about some kind of seismic societal change. But these kinds of sporting moments can alter the ways that we see ourselves. The Rumble in the Jungle informed everyone that Muhammad Ali was not destroyed by his time away from the ring, his confrontation with the US government or his loss to Joe Frazier. LeBron James just reminded Cleveland that this city is more than a punchline; that it matters. This might sound small, but it is a hell of a lot more than politicians and business leaders have done for Northeast Ohio.

Before the Rumble in the Jungle, Ali said, “If you were surprised when Nixon resigned, just watch what happens when I whup Foreman’s behind!” LeBron wasn’t really as verbose, but the simplicity of his reaction was a poetry of its own. As he wept openly overwhelmed by what he had accomplished, LeBron was asked by ABC’s Doris Burke what made this championship different from the two he had won in Miami. LeBron Raymone James said simply, “I’m home.”