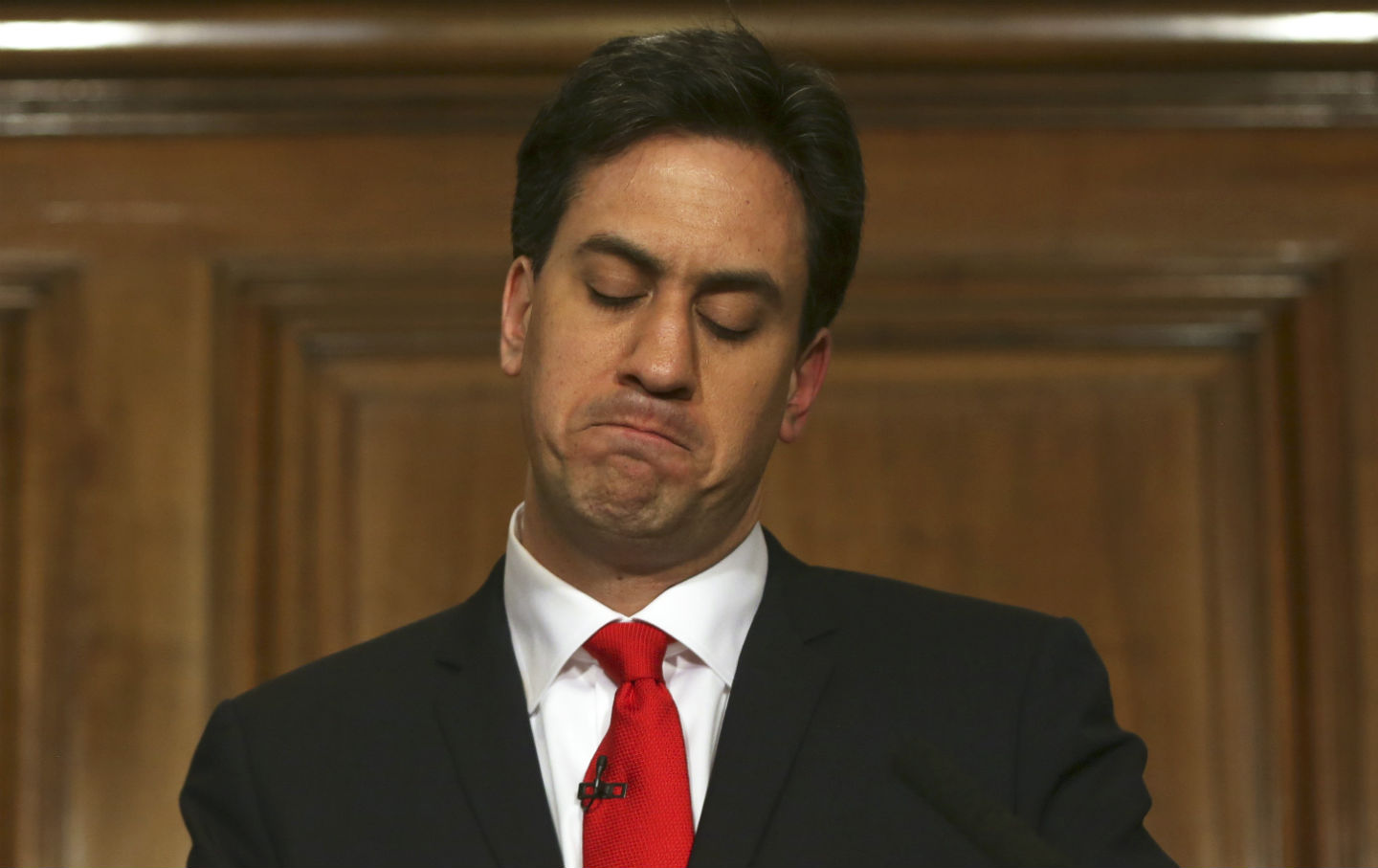 Anybody who says they saw this coming is lying. On May 7, Britain went to the polls confidently expecting some kind of coalition government. The next morning, David Cameron stood outside 10 Downing Street basking in a Conservative majority. Though Ed Miliband actually increased Labour’s share of the vote in England from the 2010 election, it wasn’t nearly enough to make up for the devastation in Scotland, where the party lost 40 seats to the Scottish National Party (SNP), which also picked up 10 seats from the Liberal Democrats. Provided they don’t destroy themselves in the referendum—promised by 2017—on whether Britain should leave the European Union, the Tories will be in power until at least 2020. If a week is a long time in politics, five years is an eternity—easily enough time to privatize the National Health Service, withdraw from the European Convention on Human Rights, and cut the BBC down to size.

There are, however, a few factors that, taken together, account for much of Labour’s difficulty, not just in this election but going forward.

§ Globalization has hollowed out the British working class. Thirty years after Margaret Thatcher broke the miners’ strike, Labour still has not come to terms with the loss of the industrial unions that founded the party and remained its base. Under Tony Blair, Labour offered a neoliberal vision of a consumer paradise built on household debt, but the global financial crisis put an end to all that, and Miliband never came up with a convincing alternative.

§ Given the choice between austerity and austerity lite, voters opted for the real thing. Like many half-truths, the now-fashionable complaint that Labour was too slow to defend the party’s record in power, thus allowing the Tories and the right-wing press to peddle the lie that it was Labour profligacy—money squandered on schools and hospitals—rather than the contagion from Wall Street that caused Britain’s deficit to balloon, is precisely half-true. How could Labour challenge the Conservatives when it clearly accepted the Tory premise that a modest deficit, in a country that prints its own money and can still borrow at historically low rates, posed a danger sufficient to require a “triple lock” on spending? Every time Ed Miliband hummed a vaguely populist tune on the economy, Ed Balls, his shadow chancellor, would break into a rousing chorus of “No new spending.” (Watching Balls go down to defeat was one of the day’s few compensations.) The only politician to confront the austerity con head-on was SNP leader Nicola Sturgeon—and look where that got her.

§ Scottish voters felt betrayed. For decades, the Labour Party has treated Scotland like a plantation, where constituency parties of a few dozen members could be easily bullied—or bought—by London. And when the SNP began to challenge that docility, both in Westminster and in Edinburgh, Labour responded by making a Faustian bargain with the Tories to put down the cause of Scottish independence. Labour never made the positive case for a solidarity across nations, or for the sharing of risk and reward as part of a commitment to the common good. Instead, in grim lockstep with the Tories—and the big Scottish banks—the party put its money on fear. That, it turned out, was the deal that broke Scottish Labour—and with it the Labour Party’s hopes of achieving a majority, perhaps in my lifetime.

§ Mobilizing and organizing are not the same thing. In the anthology Blue Labour, veteran American community organizer Arnie Graf writes that “building public relationships precedes power.” For a time last year, it seemed as if Labour, which hired Graf as an organizer (without bothering to apply for a work visa for him), was really going to do the hard work of reinventing itself. Mobilization is task-oriented: stuffing envelopes, canvassing voters, handing out literature. Organization involves listening, responding, being willing to change and to empower new leaders—a process so threatening to Labour’s apparatchiks that one of them leaked Graf’s visa status to the Sun.

§ Fear is the right’s home-field advantage. Asked why, after five years of grinding austerity, real-wage stagnation, and an economy that was outperformed in Europe not just by Stakhanovite Germans but by the joie-de-vivring French, so many English voters lined up for more of the same, one politician quoted Hillaire Belloc: “And always keep a-hold of Nurse / For fear of finding something worse.”

That was a strategy Labour never seemed able to counter, whether out of a failure of imagination or the fear of appearing fiscally irresponsible. As in Scotland in September, Labour let the Tories define the contest as a battle between hope and fear. Fear won, both times.

The media here are already mesmerized by the bloodletting between those who insist that Labour needs to lurch left and those who urge a swerve right. It isn’t pretty, but this argument, which Miliband worked so hard to avoid, needs to happen. Not because either side is correct—although my own sympathies are mostly with the left—but because at some point in the Blair era, Labour stopped standing for anything, and defeat on this catastrophic scale may prompt a renewal from the ground up, rather than (as happened after 2010) from the top down.

One mark of such a renewal would be a new attitude toward the SNP, which at the moment represents Labour’s best hope of blocking the Tory agenda. The two parties may be competitors in Scotland, but in Westminster they need to recognize their common ground—fast. Meanwhile, Labour needs to renew or reinvent its links to civil society. Not just because the unions represent only a quarter of the British workforce, but because the Tory majority means that extra-parliamentary politics—street protests, education, mobilization, and, above all, organization—are about to become important again.

Finally—and because five years in the wilderness is a recipe for despair—Labour needs to concentrate, right now, on winning the London mayor’s office back next year, when Boris Johnson’s term is up. Given how well Labour did here last week—the party took 45 of the capital’s 73 seats (though, sadly, Finchley’s Sarah Sackman was not among the winners)—and the long wait till the next national election, finding the right candidate for London is arguably even more important than choosing the next party leader.

Nicola Sturgeon’s triumph in Scotland shows what can happen with idealism and energy and a genuine openness to change. But before Labour can again serve as a vehicle for change, the party itself will have to change, to decide not just where it stands but who it claims to speak for. And to do that, it will first have to do a lot of listening.