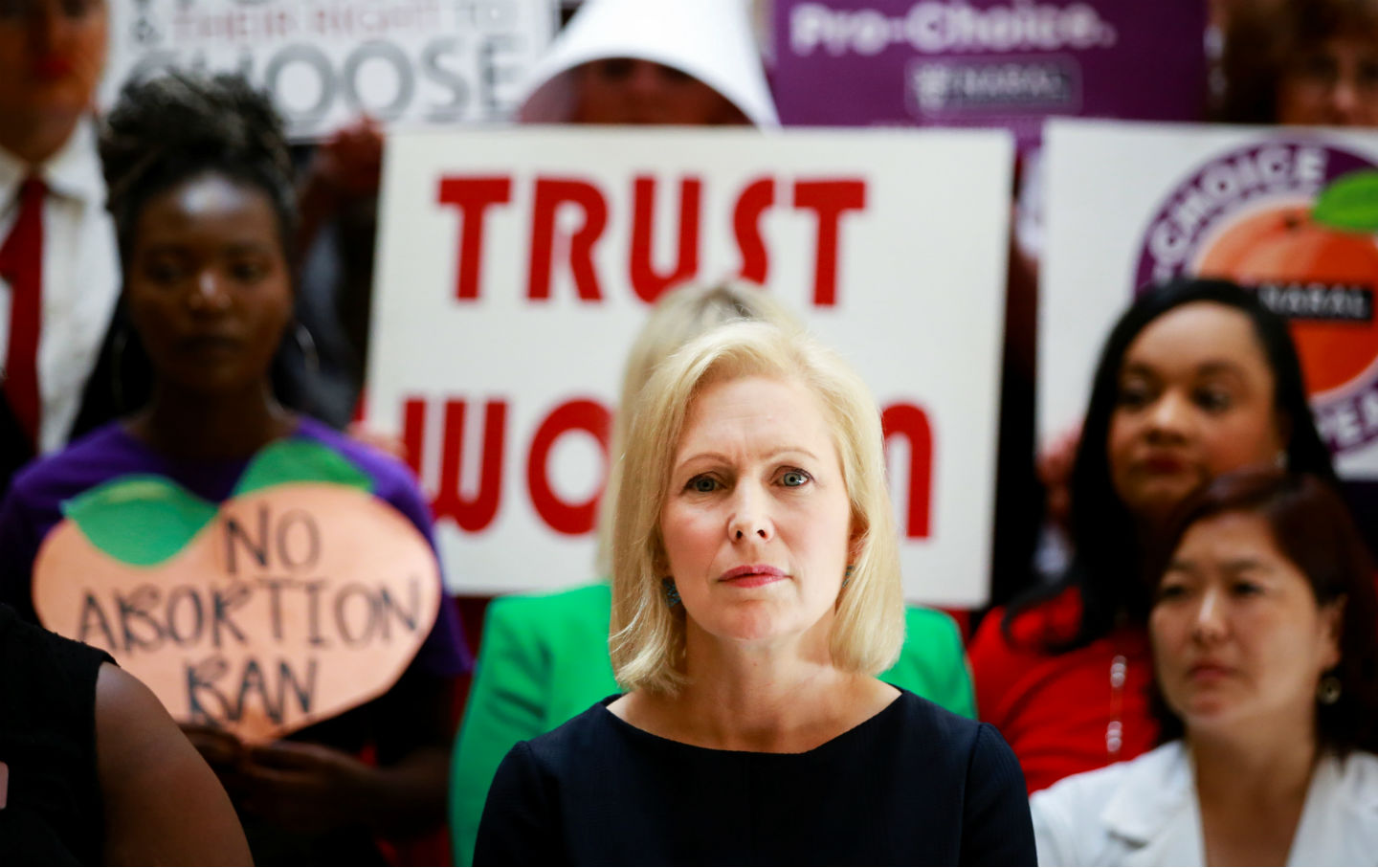 Kirsten Gillibrand at a roundtable discussion with abortion providers, health experts, pro-choice activists, and state legislators at the Georgia State House on May 16, 2019. (Reuters / Elijah Nouvelage)

I have to admit, my first thought when I learned Senator Kirsten Gillibrand had dropped out of the 2020 presidential race Wednesday evening was the classic feminist affirmation, “Lord, give me the self-confidence of a mediocre white man.” There are still plenty of people, most of them white guys, with as much support as Gillibrand, or less, and far less to contribute, who will soldier on, at least for a while, even though they also failed to make the third debate.

I’m saddened by Gillibrand’s failure to get traction in the race, and also a little bit surprised. I profiled her in April and, while she was languishing in the polls, it still felt early. The Iowa crowds seemed to like her fighting spirit and her rat-tat-tat approach to data and policy. While she didn’t quite “have a plan” for everything, à la Elizabeth Warren, she outlined a “family bill of rights” and a “common-good fund,” in which payroll taxes plus higher taxes on the wealthy and a financial transaction tax would fund Medicare for All and paid family leave and increase retirement security. She’s long been a standout on issues of abortion rights, sexual assault (both in the military and out), gun safety, and environmental protection, backing a Green New Deal before some of her competitors.

Inside the Gillibrand campaign 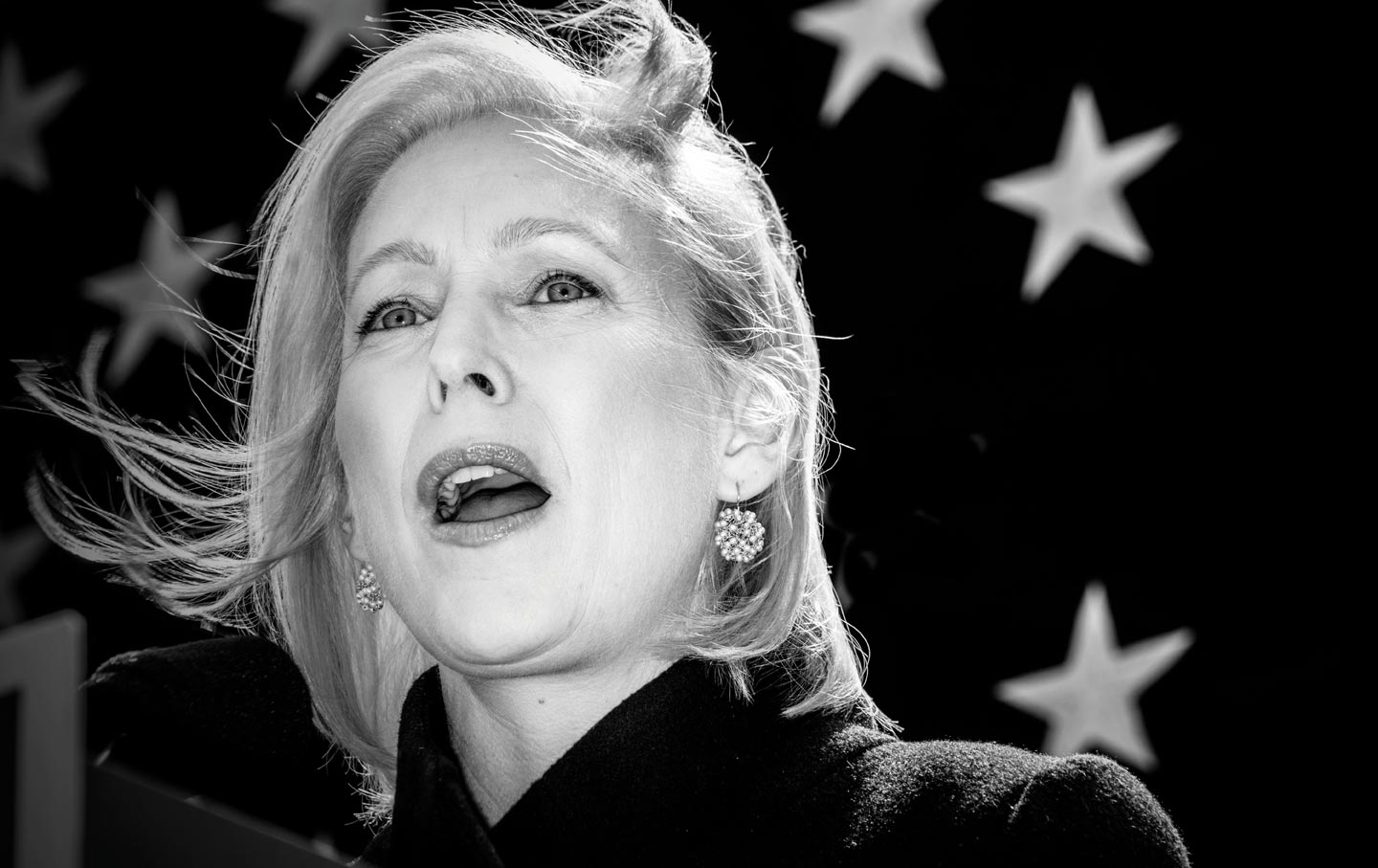 Kirsten Gillibrand Isn’t Afraid of Anything

Gillibrand staked out a hard-line Trump resistance line early on. She voted against his cabinet nominees and judicial picks more than any other senator, memorably refusing to vote to give Defense Secretary James Mattis a waiver from rules requiring military leaders to be retired for at least seven years—he only had three and a half—to preserve civilian control of the military. That was another one of Gillibrand’s issues, and it’s sad that it’s not one exciting Democratic primary voters.

Maybe her most memorable campaign moments came when she spoke out about “white privilege,” a vexing concept to many white people who don’t see it—once at a Youngstown, Ohio, roundtable (read the whole thing here), a second time at the July Democratic debate. There she suggested she had a special responsibility to explain the concept to white women in the suburbs, and she put it this way. “When their son is walking down a street with a bag of M&Ms in his pocket wearing a hoodie, his whiteness is what protects him from not being shot,” she said, as the audience applauded. “When their child has a car that breaks down and he knocks on someone’s door for help and the door opens and the help is given, it’s his whiteness that protects him from being shot.”

There’s no polling data to suggest that her calling on Senator Al Franken to resign, in the wake of multiple sexual misconduct allegations, contributed to her lagging polls, but still, the people who wrongly blamed her for Franken’s troubles—he was the one with the eight accusations, and he was the one who resigned—took a victory lap Wednesday night. And it’s hard not to think it played some kind of role—whenever I praised Gillibrand on social media in the last year, or even mentioned her, I was swarmed by people who couldn’t help blame a powerful woman for a man’s troubles—but it shouldn’t have.

In a memo to reporters, Gillibrand’s campaign announced she will soon relaunch her Off the Sidelines PAC to raise and invest at least $1 million to elect women in 2020. In September she’ll headline an Annie’s List event in Texas, focused on electing Democratic women in that increasingly purple state.

Gillibrand ran on being “brave.” She’s brave enough now to admit that the time has come to return full-time to her Senate career. Here’s hoping that a few of the men who are polling where she was will be just as brave—and soon.