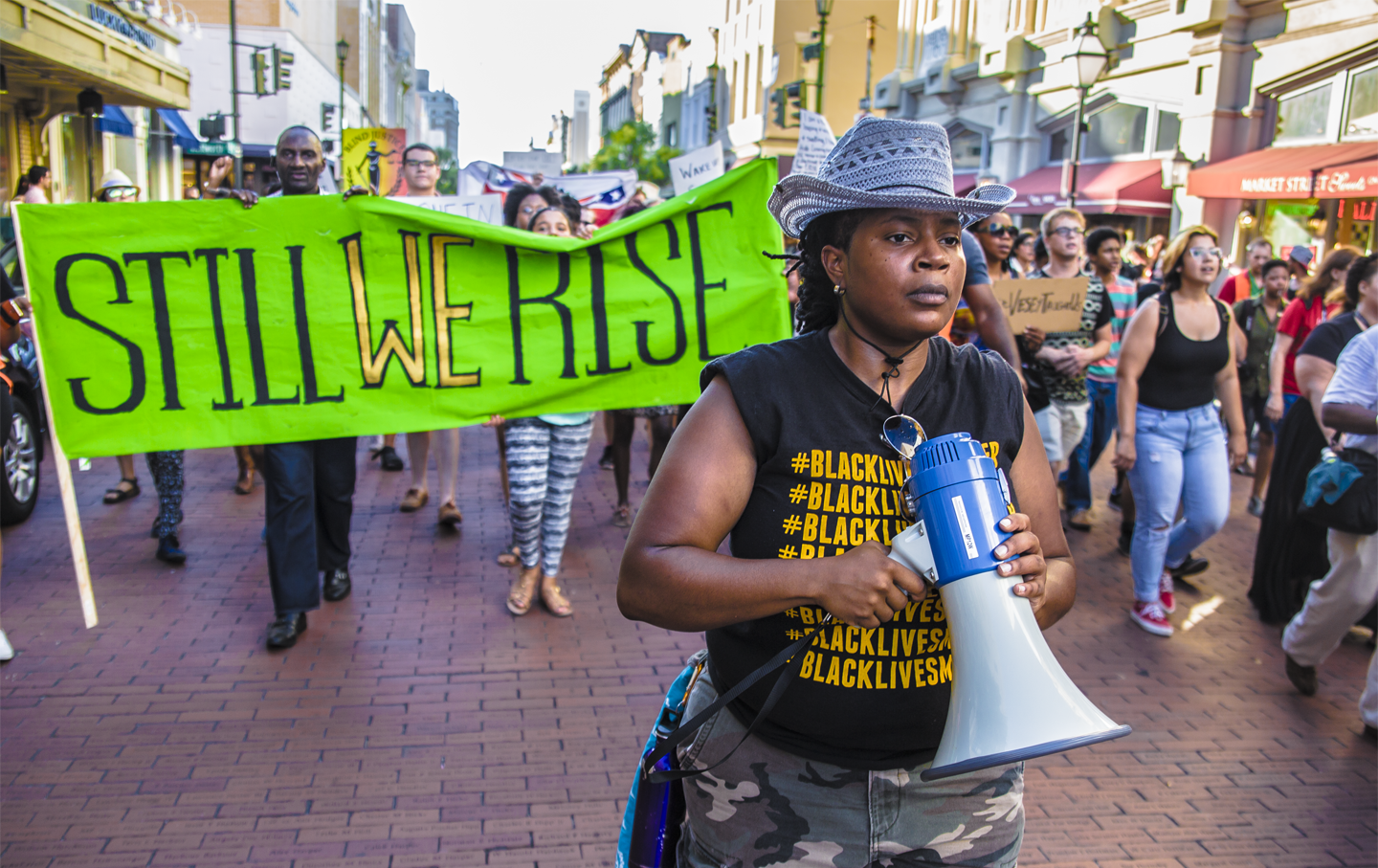 Kim Davis, the county clerk in Kentucky who refused to issue marriage licenses to same-sex couples, plays into our worst stereotypes about the South. Her intransigence in the face of June’s Supreme Court ruling legalizing same-sex marriage nationwide places her in a legacy of Southerners who have refused to follow the law of the land, instead using the power of their office to keep progress at bay.

But LGBTQ communities in the South face challenges beyond Kim Davis’s bigoted claims in the name of religious freedom. Since 1993, the organization Southerners on New Ground (SONG) has worked to address some of those challenges, specifically the criminalization and police violence that affect its 3,000 members across the region. SONG takes on local fights, such as its current campaign in Durham, North Carolina, to pass an ordinance to stop police profiling of the city’s LGBTQ, black, immigrant and youth residents. The Atlanta-based organization also collaborates nationally with Black Lives Matter and the Not1More organizing, strengthening the role that LGBTQ activists play in movements to end deportations and anti-black racism.

Later this year, SONG will change leadership: co-director Caitlin Breedlove will step down, and Mary Hooks will join Paulina Helm-Hernandez in leading the organization. I interviewed Hooks via e-mail about how the Supreme Court ruling on marriage affects her work and the role of religion in Southern organizing. The exchange that follows has been edited for clarity and length.

DMcC: In a recent published conversation between SONG’s current co-directors, Helm-Hernandez says, “This was never just a job to us; this was a place for our political dreams.” What is a pressing political dream you have right now, and why is SONG the place to pursue it?

“We have to listen to people about what is really going on in their lives, because that is different from what we are told is happening with black LGBTQ people.”

MH: I dream about rigorous, bold, courageous leadership that can work across movements to take on key fights of our time. Our communities were criminalized and targeted by the war on drugs, and we grew up in that warfare. We refuse to let that war shape our lives anymore. I’m excited about winning LGBTQ-led anti-criminalization campaigns that change the real day-to-day state of our lives.

The LGBTQ movement emerged from a century of liberation fights that were based on identity. Now we are seeing the strategic necessity of our communities to work together not just around identity, but also around the giant forces creating these problems and the solutions that we want to collectively create.

DMcC: You’re moving into the role of co-director after working with SONG for four years as both Alabama field organizer and regional campaign coordinator. What’s a key lesson about LGBTQ organizing that you intend to carry with you into this new leadership position?

MH: We have to listen and talk with people about what is really going on in their lives, because that is different from what we are told is happening with black, LGBTQ and rural people, immigrants and people of color.

Many people, including those in the White House, were saying that police body cameras were going to intervene on police violence and that we should direct our efforts toward getting them in every police department. But we saw the videos of Eric Garner, Walter Scott, and Sandra Bland. We knew that cameras were not going to change our material conditions. When we listened to our members’ stories, we heard over and over again about daily interactions with the police that the presence of body cams isn’t going to sever. We have to think more broadly and look at systems that support this type of violent engagement in our communities. It isn’t about just one or two bad-apple cops.

DMcC: Is there a new national LGBTQ rights movement emerging now that same-sex marriage has been upheld as the law of the land? How could a new movement meet the needs of communities you work with?

“When I made the decision to live out loud as a lesbian, all hell broke loose. The community I found refuge in condemned and shamed me.”

MH: Of course, it’s not just middle-class white gay men that have benefited from marriage, but marriage is not the end-all solution for parts of the LGBTQ community that are living in crisis. There’s still a need to access affordable, comprehensive, and dignified healthcare. To be able to walk down the street without fear of being harassed by the police or found dead the next day for embodying our genders.

There have always been the rest of us in the queer and LGBT liberation movement. We have been doing the hard work of fighting racism, addressing HIV criminalization, supporting sex workers, providing jail and prison support. What I think is happening now is that many of the most privileged in LGBTQ communities have gotten marriage licenses and many of them will now step aside. There are people who are just going to throw rice and cut the cake, but won’t address issues of police violence, the murdering of trans black women, or mass incarceration. We are calling on those who are here to stay by our side and who won’t stand in our way as we continue to prioritize the struggles of the working-class LGBTQ community.

DMcC: When you came out as a teenager, you were rejected by the Pentecostal church. At the Movement for Black Lives gathering in Cleveland, you and an organizer with the Malcolm X Grassroots Movement co-facilitated a workshop called, “The Black Church: We Need You Now More Than Ever!” What role do faith and religion play in your work?

MH: Church missionaries and mothers taught me how to organize. I sat and learned from elders and I saw interdependence demonstrated. I felt affirmed by the intergenerational community of the black church. But when I made the decision to live out loud as a lesbian, all hell broke loose. The very community I found refuge in condemned and shamed me. I had been willing to sacrifice some expression of myself in order to play by the rules of that community.

I believe that many black queer and trans folks long for those spaces, long for that sense of spiritual connection, and enjoy the culture of the black church. We long for those things despite the ridiculous, abusive and oppressive power dynamics that play out. I often joke and say, “I’m going to have to get saved in order to organize in the South,” because Christianity is so woven into the culture here. I think there is a lot that the black LGBTQ community and the black church can do together that can collectively build power, transform those dynamics and teach each other.

MH: LGBTQ people of color have always been in liberation movements across the world and over time. Circumstances of history have dictated whether or not we’ve been “out,” but we have always been there. Today, we see LGBTQ leaders and organizers embedded in both the LGBTQ movement and in non-LGBTQ specific movements. There are queer and trans folks doing work inside the black liberation, immigrant rights and reproductive justice movements. And leaders from these communities and movements are working within the LGBTQ movement.

We need each other to survive the crises of our times and to dream about what we can build together. SONG was founded based on this belief, and we have worked over the past two decades to build the type of multi-racial organizing that can achieve great changes for our communities. It is especially important to foster inclusive leadership not just for diversity’s sake, but because our movements won’t win without it.