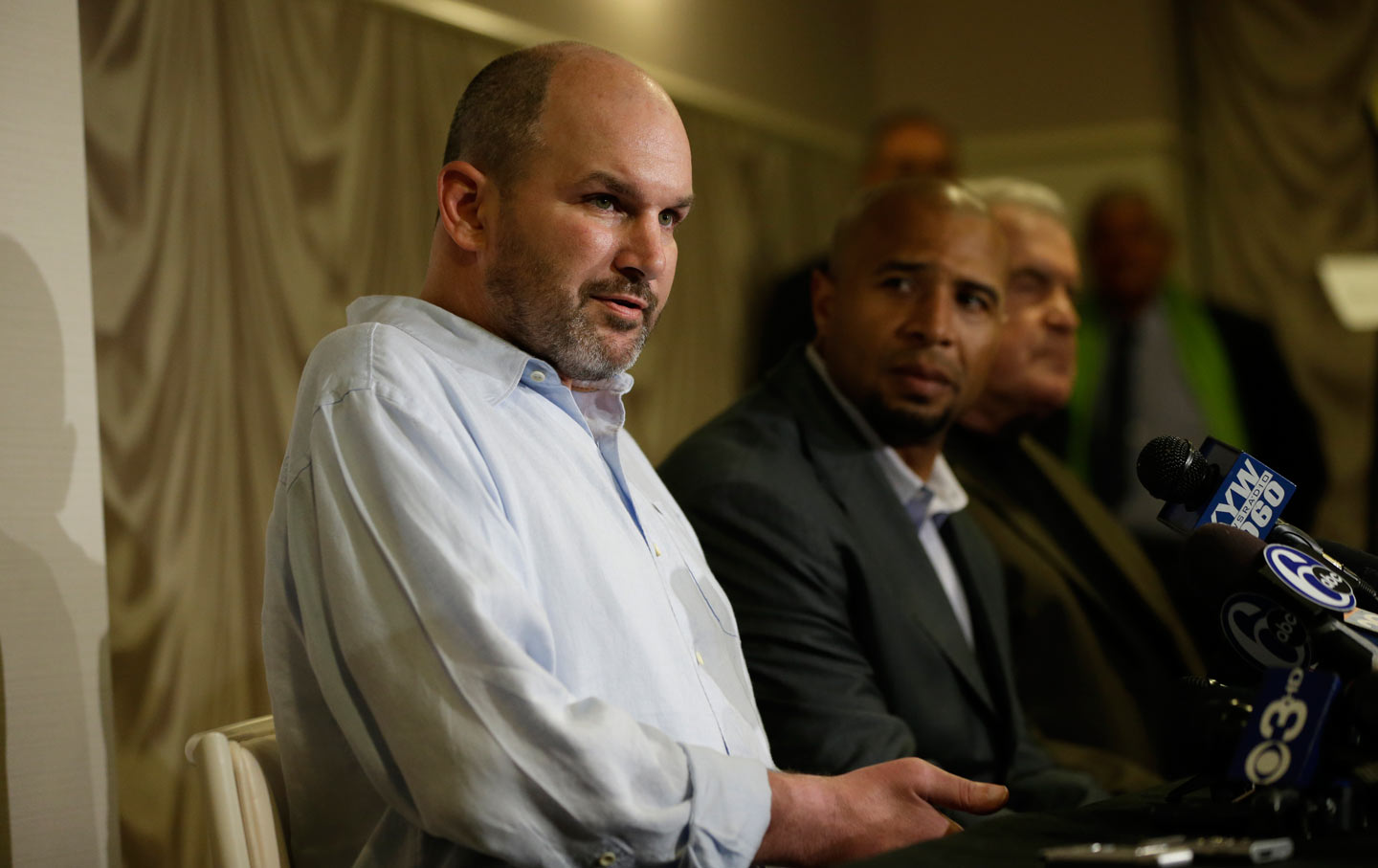 Former NFL player Kevin Turner, left, speaks at a news conference in Philadelphia in 2013 after a hearing to determine whether the NFL faces years of litigation over concussion-related brain injuries. (AP Photo / Matt Rourke)

I first met Kevin Turner for an interview in New York City in 2011. At 42 years old, he walked into the room looking like a slightly older version of the top-shelf athlete that he was as a running back at the University of Alabama and during his eight-year career in the NFL. He had a shaved head, which thinly disguised his receding hairline, and some white in his mustache and stubble, but other than that looked like someone who could credibly take the field the next day. Before the interview started, I couldn’t help myself. I said to him, “No one would ever look at you and think that you have been diagnosed with ALS.”

He smiled at me and took his hands out of his pockets and said, “Yeah, but there’s this.” His fingers were curled up into themselves, as if he was double-crossing both digits. He then demonstrated the amount of effort it took for him to pick up a pencil. Without an ounce of self-pity, he said to me, “This is just the beginning.” It was. Over the next five years, ALS robbed Kevin Turner of his bodily control joint by joint, yet he never lost either his fierce dignity or his courage. In fact, Kevin Turner’s willingness to be as public as possible about the condition of his body and take on the NFL is really one of the more courageous acts we’ve seen in this sports world. He said to me, “I am very confident that head trauma—concussions—play a part in ALS symptoms. Maybe we can get to the point where we can say who may be predisposed to ALS if they have a lot of head trauma.”

Turner was then lead plaintiff in a lawsuit levied against the league, which resulted in a $765 million class-action settlement. Some players believed that this amount was not enough, but Turner argued that to appeal it meant that people in his situation, dealing with crippling medical bills on a regular basis, would leave this world before assistance could help their families.

Now Kevin Turner is dead, and his passing really does make me wish fiercely for an afterlife. Not only because he was a beautiful person, but because there are people we should want to meet their maker and explain what the hell happened to Kevin Turner as a result of malignant institutional neglect. There is NFL Commissioner Roger Goodell, the sort of person who will do the ice-bucket challenge to fight ALS, while denying the very clear science showing that there is a connection between CTE and the crippling disease; a man who when asked about the dangers of football earlier this year smirked and said, “There’s risk in sitting on your couch.”

There is Arizona Cardinals Coach Bruce Arians. The very day that Kevin Turner died, Arians, who is a media darling for playing the old-school tough guy, echoed his bosses—which is probably the least “tough guy” action imaginable—and bellowed, “People that say, ‘I won’t let my son play [football]’ are fools. We have this fear of concussion that is real, but not all of those statistics, I think, can prove anything,”

Then there is Jerry Jones. The morally bankrupt Dallas Cowboys owner—who doubles as the league’s most consistently awful and unfireable general manager—opined this week about the relationship between chronic traumatic encephalopathy and football, saying, “No, that’s absurd.”

They make these denials even though in 2014 the league quietly agreed to facilitate, as Ken Belson in The New York Times described, “an open-ended commitment to pay cash awards to retired players who have dementia and other conditions linked to repeated head hits, according to documents filed in the United States District Court for the Eastern District of Pennsylvania.” They make these denials even though the NFL finally admitted to Congress earlier this month that links exist between their sport and CTE.

Most pointedly, they make these denials the very week that the Times, in a devastating report, showed how the NFL has cooked the concussion books. The Times demonstrated that “more than 100 diagnosed concussions” were omitted from NFL studies from 1996–2001. These doctored studies were used by the NFL to argue in numerous medical journals and under oath to Congress that there was no connection between their sport and long-term brain injuries like the ALS that killed Kevin Turner. If this kind of doctored science and manufactured negligence bears a strong echo to the tobacco industry, that is no accident. Despite NFL lawyers’ telling the Times that Big Tobacco is “perhaps the most odious industry in American history,” it hasn’t stopped them from sharing “lobbyists, lawyers and consultants.” The Times also showed personal correspondence, dinner invitations, and a “request for lobbying advice” between Big Tobacco and Big Football.

The Times reporting, which has the NFL scurrying to buy a full-page ad in the paper to issue a rebuttal, shows that this is not only a “league of denial” but a league built on lies and broken lives.

Kevin Turner and I stayed in contact, remaining friends. The Kevin Turner I knew was willing to spend his last years raising awareness about the connections and fight back. He started The Kevin Turner Foundation to provide “education, support, and medical resources” for families dealing with the ALS that comes from high-concussion sports.

“Jesus says that in this world there will be trials and tribulations, but be of good cheer, for there is something after this,” he said to me. “I wanted to make something bright out of something that wasn’t so bright and maybe help somebody else along the way. I really think that that’s what I’m here to do now.”

He did help, not that the NFL wants you to know about his work. When Kevin Turner passed, there was no statement from the league. There was not even an original article on its website, NFL.com. Instead, it just posted a reprinted report from the Associated Press. Instead, we had to hear Jerry Jones, Bruce Arians, and, through his silence, Roger Goodell effectively scoff at Kevin Turner’s work and the last years of his life. Perhaps Goodell is being quiet because he is working on his acceptance speech for an honor he is being given by the Jacksonville Sports Medicine Program called the Leadership in Sports Health, Safety & Research Award. This is not a joke. To see Roger Goodell so honored concurrent with Kevin Turner’s death is to bear witness to the sports version of seeing Henry Kissinger win the Nobel Peace Prize. It also confirms, as if we needed more evidence, that we might love watching the NFL, but—as Michael Jackson put it—they don’t care about us.