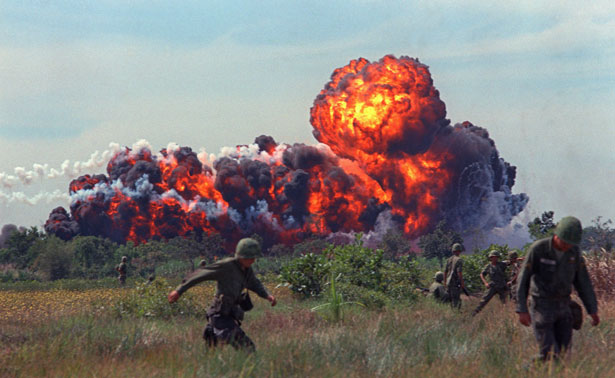 “Rick,” a Facebook friend writes, “curious to see what you make of the old debate (which may have some new evidence, see Galbraith II) re JFK and Vietnam. Would we have gone or stayed if JFK lived? Or was he the fervent Cold Warrior some paint him as? (My dad marched in his inauguration, and was almost killed six or seven years later.)”

The argument that John F. Kennedy was a closet peacenik, ready to give up on what the Vietnamese call the American War upon re-election, received its most farcical treatment in Oliver Stone’s JFK. It was made with only slightly more sophistication by Kenneth O’Donnell in the 1972 book Johnny, We Hardly Knew Ye, in which the old Kennedy hand depicted the president telling him, “In 1965, I’ll become one of the most unpopular presidents in history. I’ll be damned everywhere as a Communist appeaser. But I don’t care. If I tried to pull out completely now from Vietnam, we would have another McCarthy red scare on our hands, but I can do it after I’m elected.” O’Donnell also claimed that in an October 2, 1963, National Security Council meeting, after debriefing Robert McNamara and General Maxwell Taylor on their recent trip to Saigon, “President Kennedy asked McNamara to announce to the press after the meeting the immediate withdrawal of one thousand soldiers and to say that we would probably withdraw all American forces from Vietnam by the end of 1965. When McNamara was leaving the meeting to talk to the White House reporters, the President called to him, ‘And tell them that means all the helicopter pilots, too.’ ” Promptly, wrote O’Donnell, McNamara double-crossed the president, giving the reporters merely a prediction of the end of America’s war, not Kennedy’s prescription of the end of America’s war: McNamara merely said they thought “the major part of the the U.S. task” would be completed by the end of 1965, nothing about the president’s intention to complete the task by the end of 1965.

O’Donnell was seeing the world through Camelot-colored glasses. As the historian Edwin Moise demonstrates in A Companion to the Vietnam War (2002), NSC minutes are a matter of record, and the notes show the president himself approving a statement that was only a prediction that things would be over by the end of 1965, framed merely as the observation of Taylor and McNamara. (“They reported that by the end of this year, the U.S. program for training Vietnamese should have progressed to the point where 1,000 military personnel assigned to South Vietnam can be withdrawn.”)

Now, on the broader claim that Kennedy truly intended to end the war by the end of 1965, things get more interesting, and that’s where the case recently made by James K. Galbraith, son of the famous Kennedy hand and economist John Kenneth Galbraith, comes in. As he put it categorically in a letter to The New York Times, “President Kennedy issued a formal decision to withdraw American forces from Vietnam.” Is that true? Only literally, which in the end adds up to mostly nothing.

Kennedy, of course, was the first president to send soldiers to Southeast Asia, 16,732 of them, supposedly as mere “advisers,” but many of them actually combatants. As Kennedy had told famously told The New York Times’s James Reston late in 1961 after the failure at the Bay of Pigs and the erection of the Berlin Wall, “Now we have a problem in making our power credible, and Vietnam is the place.” And a damned good place, his military men kept telling him: early in his third year as president, his Vietnam commanders reported that “barring greatly increased resupply and reinforcement of the Viet Cong by the infiltration, the military phase of the war can be virtually won in 1963”—an opinion he continued hearing repeatedly. That’s important context, for whether JFK’s plans on what to do in Vietnam were contingent on military success in Vietnam—as opposed to cutting and running even if that meant leaving the country to the Communist insurgency—is key to this debate.

As Edwin Moise notes, though, “President Kennedy also read much more pessimistic evaluations. These were written mostly by civilians—some by officials in the State Department, others by journalists like Malcolm Browne and David Halberstam. Kennedy did not openly commit himself to either the optimists or the pessimists.” What he did do was insist publicly that he would never cut and run. July 13, 1963: “We are not going to withdraw from that effort…. we are going to stay there.” September 2: “I don’t agree with those who say we should withdraw. That would be a great mistake.” September 26: “We have to stay with it. We must not be fatigued.”

And what of privately? Bug-out plans were indeed drawn up. Galbraith points to an October 4 message from General Taylor to the Joint Chiefs of Staff: “Program currently in progress to train Vietnamese forces will be reviewed and accelerated as necessary to insure that all essential functions visualized to be required for the projected operational environment, to include those now performed by U.S. military units and personnel, can be assumed properly by the Vietnamese by the end of calendar year 1965. All planning will be directed towards preparing RVN forces for the withdrawal of all U.S. special assistance units and personnel by the end of calendar year 1965.” (Galbraith himself adds the emphasis.) “Execute the plan,” the memo continues, “to withdraw 1,000 U.S. military personnel by the end of 1963…”

Noam Chomsky ably took on this claim by pointing out that the withdrawal plan in question, labeled NSAM 263, included language Galbraith conveniently omits, for instance, “It remains the central object of the United States in South Vietnam to assist the people and Government of that country to win their contest against the externally directed and supported Communist conspiracy. The test of all decisions and U.S. actions in this area should be the effectiveness of their contributions to this purpose.” And that supporting texts included phrases like “without impairment of the war effort,” and that “what furthers the war effort we support, and what interferes the with the war effort we oppose,” and “our actions are related to our fundamental objective of victory.” Moises points to language in minutes from the October 2, 1963, NSC meeting: “President Kennedy indicated he did not want to get so locked into withdrawal plans that it would be difficult to cancel them if the war did not go so well after all.”

In other words, whether John F. Kennedy’s formal decision would be carried through in the interim between October 1963 and January 1966 was contingent on what happened in the future. One day this summer I issued a formal decision to go the beach. Then it rained. And so I did not go to the beach.

And as anyone who knows anything about the Vietnam War knows, the people funneling intelligence to the president were alarmingly adept (“the military phase of the war can be virtually won in 1963”) at claiming the sun was shining when it actually was pouring down rain. In fact, when it came to America’s military prospects there, it was winter in Seattle just about all the time. But tomorrow was always going to be sunny, if you asked the Joint Chiefs of Staff.

The best evidence that this “formal decision” by JFK lacks forecasting power is the actual outcome of phase I of that selfsame formal decision: to remove 1,000 soldiers from Vietnam by the end of 1963. Only 432 were actually removed by the end of 1963 (“although,” writes Moise, “some sources give lower figures,” and even that may have merely been the result of shifting deployment schedules). Sometimes war is what happens when you’re busy making other plans.

And that’s not because there was a new president by the end of 1963, at least if you trust Galbraith, who cites as clinching his argument (though it actually proves his argument is wrong) that a December 11, 1963, memo noting that the plan to withdraw 1,000 soldiers was still in force, “with no reference to the change of commander in chief.” Through the rest of 1963, in other words (Galbraith’s words), America’s Vietnam policy was still Kennedy’s, not LBJ’s. The policy, as articulated two days before Kennedy’s death by Henry Cabot Lodge, America’s ambassador to Vietnam: “We should continue to keep before us the goal of setting dates for phasing out U.S. activities and turning them over to the Vietnamese…. We can always grant last-minute extensions if we think it wise to do so.”

Finally, consider context. We all know how the Cold War worked: Republican claims about “losing China” motivated a generation of Democrats into pants-pissing fears about not looking tough enough on the reds. Writes Moise, “It is hard to believe that Kennedy as a man who had spent so much effort cultivating an image of machismo and youthful vigor would not have cared about being thought a Communist appeaser.” He observes, with subtly and sharp historical acumen, “It is not at all unusual in Washington for people to write plans based on a ‘best-case’ scenario. It also seems possible that when Kennedy based plans on the optimists’ projections, he was using this as a way of putting pressure on senior military officers to be realistic in their reports. They might be less inclined to write inflated claims of progress if they were clearly told that such claims would be treated as justifications for troop pullouts.”

He concludes archly, “To have reached a firm decision to withdraw, so long in advance, he would have to have felt that no possible new development, between 1963 and 1965, might create a prospect of an acceptable outcome of a continued struggle. To have thought the situation was such an unmitigated and unmitigatable disaster, he would have had to think that most of what was being said about he Vietnam War in the National Security Council was nonsense, and that his top military and foreign policy advisors were fools or liars. If he felt that, he did an extraordinary job of concealing it.” I agree wholeheartedly.

So what would have happened in Vietnam had JFK lived? Let the man who knew him best have the last word. Asked in 1964 whether America would have “go[ne] in on land” if the South Vietnamese were about to lose, Bobby Kennedy answered, “Well, we’d face that when we came to it.”