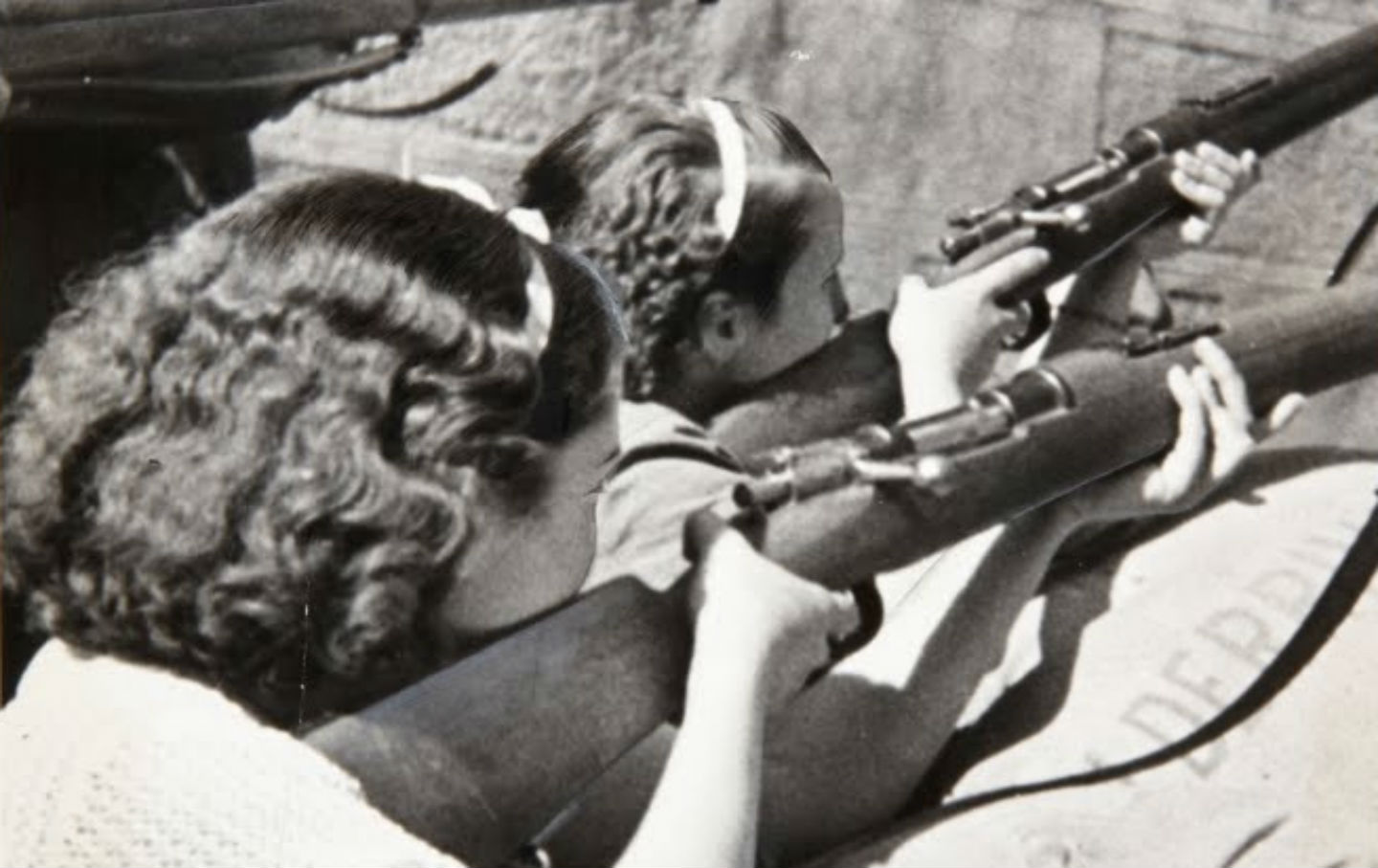 Spanish women defending the Republic in the Siege of the Alcázar in Toledo, 1936. Wikimedia Commons/Google Cultural Institute

The Spanish Civil War began with a military uprising in Spanish-held Morocco against the leftist Spanish Republican government. It ultimately became a proxy war between the international left, who supported the Loyalists, and the Fascist right, who supported the Nationalists. Socialists, communists, and others from around the world rallied to the Loyalist cause. In the Nation of January 16, 1937, American socialist leader Norman Thomas, a former associate editor of the magazine, wrote an essay titled “The Pacifist’s Dilemma,” which considered the question of whether pacifists should get involved in the war in Spain. Ultimately, Thomas said, the pacifist position required actively aiding the Republicans.

The pacifism which makes mere abstention from war the supreme command will not deliver mankind from new cycles of war and new dark ages of oppression. It is unrealistic and mad to say that it does not matter who wins in Spain if only the guns are stilled. It matters profoundly not only for Spain but for mankind that the fascist aggression of which Franco is the nominal and brutal leader be defeated. Persons who believe this must support the gallant resistance of the workers and other loyalists…. Not a method of keeping out of war but the establishment of a warless world must be our goal.

UPDATE: After publishing this Almanac entry, we received a message from Norman Birnbaum, emeritus professor at the Georgetown University Law Center and a member of The Nation’s board. He wisely pointed out that Thomas’s article about whether pacifists should participate in the Spanish Civil War did not quite address the main political questions the conflict had raised. He agreed to write a brief note on the deeper meaning and legacy of the Spanish Civil War.

The Spanish Civil War was a conflict that anticipated much of the terrible decade that was to follow. The refusal of the British and French governments to do anything to stop German and Italian military intervention on the Fascist side was a rehearsal for the ignoble capitulation to Hitler’s demands on Czechoslovakia of 1938 at Munich. In the British case, non-intervention was motivated in some part by fear of the Soviet Union, which did assist the Spanish Republic with arms and advisers. In France, when the Spanish Civil War broke out in 1936, the Socialist Premier Léon Blum had good reason to fear that military assistance to the Spanish Republic might lead to a French civil war—the one that later took place between the Resistance to German occupation and the Vichy regime. Franklin Roosevelt and his Ambassador to the Spanish Republic, Claude Bowers, sympathized with the Republic. In view of the then prevailing US isolationism and the opposition to the Spanish Republic of the Catholic Church, led by the extremely reactionary Pope Pius XII, they concluded they could do nothing to save it.

The cause of the Republic evoked enthusiasm among artists, intellectuals, the organized democratic left, and large segments of the public everywhere in the Western world. Some 40,000 foreigners fought for the Republic, including about 3,000 Americans. Hemingway took up residence in beleaguered Madrid, where one could travel to the battlefront by metro. He later wrote For Whom the Bell Tolls in defense of the Republic. Matters, however, were far from a classical confrontation of democratic light and fascist darkness. The Soviet Union used its aid to the Republic to maximize the influence of the Spanish Communist Party. In his book Homage to Catalonia, George Orwell described the repression of anarchist and independent socialist groups by the government of the Republic. Our own John Dos Passos chronicled his disillusionment with the Republic, but André Malraux organized an air squadron that actually fought the Fascists and later wrote a moving novel, Man’s Hope, on the war.

The geopolitical conflicts and ideological fissures of the Civil War, which ended in 1939, months before the temporary reconciliation of Nazi Germany and the Soviet Union in the pact that enabled Hitler to begin the world war, appear not to have gone away. It is necessary to recall the humiliation and impoverishment and terror visited upon the Spanish people by the victors. The United States was complicit in the longevity of Spanish fascism, having made of Franco’s Spain a de facto NATO ally. The return of Spain to democracy and European civilization after Franco’s death in 1975 was a belated triumph for the Republic—but a very, very costly one. – Norman Birnbaum