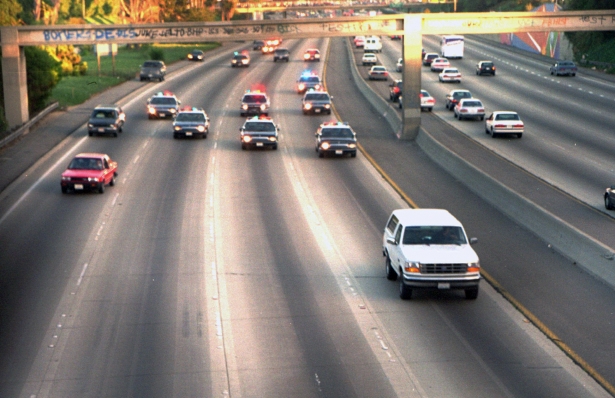 The infamous white Bronco driven by O.J. Simpson's friend Al Cowlings as it drove down an L.A. freeway fleeing police. The Bronco chase was merely the start of the trial against Simpson for the alleged murder of his ex-wife, Nicole Brown Simpson, and her friend Ron Goldman and it set the tone for the media circus to follow. (AP Photos)

The following essay, “America and the Simpson Trial” (March 13, 1995), was the third piece that law professor Patricia J. Williams had written for The Nation; in previous years she had reviewed a book on affirmative action and written a beautiful essay about the Brown family of v. Board of Ed fame. She became a Nation columnist in May 1997. Even for those of us still in grade school (if that) at the time of the Simpson trial, Williams’s essay brings back all the absurdities of that moment, which arguably inaugurated the era of the mega-media-pseudo-event-spectacular we are still living through today. Especially in its critique of the media’s bizarro treatment of race relations during the trial, the essay maintains its bite twenty years later.

Still troubling to the unsequestered of us…might be the extent to which the public airing of the Simpson trial is being used to divert political attention from some very great divisions rending this nation. “Maybe the Simpson trial will undo the misperceptions created by the Rodney King thing,” said one commentator on a morning news show—barely two days after publication of the Mollen Commission report, which detailed police excesses in Harlem and the Bronx, including racketeering, narcotics dealing and even attempted murder. This seemingly pervasive sentiment astonishes me for a number of reasons: It reduces black anxiety about the justice system to superficial and singular televeision encounters—the Rodney King “thing” may have “created” a bad impression, but look, “the system” is apologizing, by making up for it with O.J. Simpson. It trivializes or ignores the day-to-day experiences of blacks who are treated as “suspect profiles” at best and suffer a range of abuses in contacts with the justice system that go from negligence to outright brutality. And it dangerously misreads the discontent of a significant population that is not merely disaffected but enraged, whose fury is barely reflected in the staggering rates of black criminalization and imprisonment.