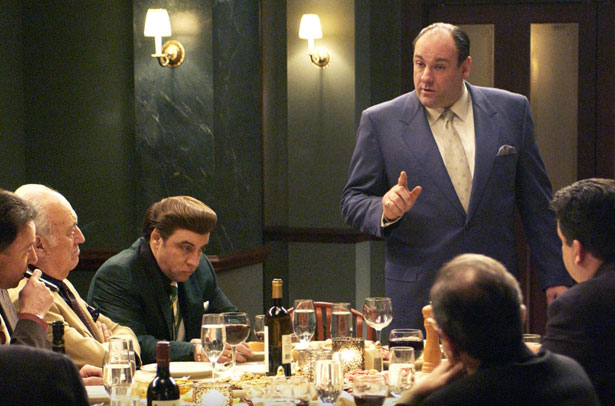 Sopranos star James Gandolfini, who died in 2013 of a heart attack, embodied the anxiety-ridden crime boss and father, winning three Emmys for his performance. (AP Photo)

The last episode of The Sopranos aired eight years ago today, leaving viewers wondering what the sudden ending, and indeed the entire series, had meant. Six years earlier, the late, great essayist Ellen Willis wrote about the show for a special “Hollywood Issue” of The Nation. Her essay, “Our Mobsters, Ourselves,” was excerpted in The Nation’s recent 150th anniversary issue.

It’s no surprise that by the second hour of the third season premiere Tony is back in Jennifer Melfi’s office. The requirements of the show’s premise aside, his untenable situation has not changed. Having glimpsed the possibility of an exit from despair, it would be out of character for him simply to close that door and walk away. For the same reason, I suspect our culture’s flight from psychoanalysis is not permanent. It’s grandiose, perhaps, to see in one television series, however popular, a cultural trend; and after all The Sopranos is on HBO, not CBS or NBC. But ultimately the show is so gripping because, in the words of Elaine Showalter, it’s a “cultural Rorschach test.” It has been called a parable of corruption and hypocrisy in the post-modern middle class, and it is that; a critique of sexuality, the family and male-female relations in the wake of feminism, and it’s that too. But at the primal level, the inkblot is the unconscious. The murderous mobster is the predatory lust and aggression in all of us; his lies and cover-ups are ours; the therapist’s fear is our own collective terror of peeling away those lies. The problem is that we can’t live with the lies, either. So facing down the terror, a little at a time, becomes the only route to sanity, if not salvation.