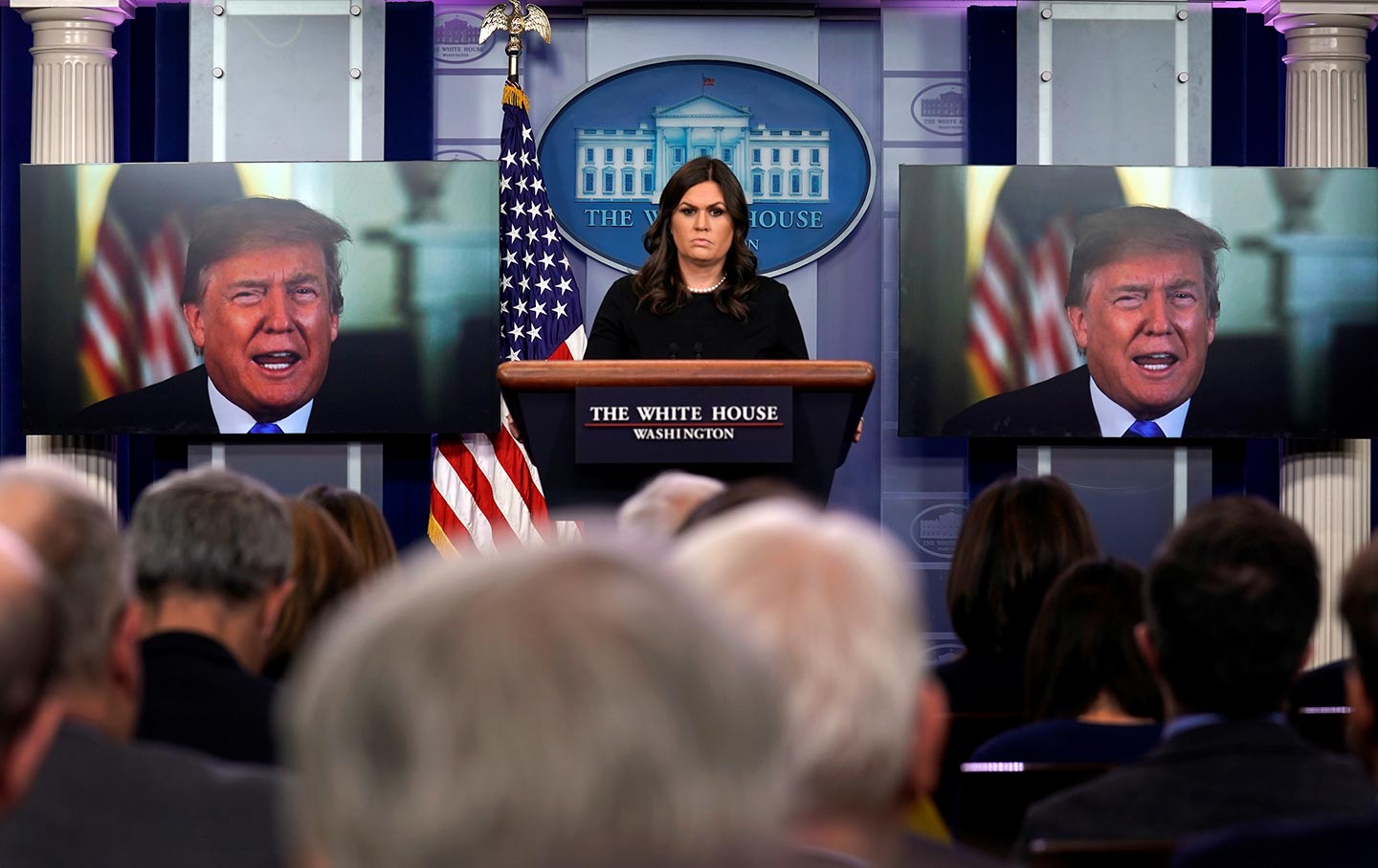 Newspapers across the United States will editorialize today in defense of freedom of the press. This is a necessary act at a time when Donald Trump’s disdain for the basic premises of the American experiment is on display in his crude attacks on journalists and journalism.

Trump is certainly not the sole cause of the crisis that has befallen American journalism. Newspapers were folding, newsrooms were thinning out, editors and reporters were being laid off at alarming rates long before the 2016 election. Hedge-fund owners were sacrificing local journalism to pad their profits. Mergers and acquisitions were dumbing down print, broadcast, and online media in pursuit of a one-size-fits-all bottom line. Federal policies were promoting consolidation and profiteering, while failing to adequately fund public and community media.

Trump has only made a bad situation worse with his empowerment of a wrecking crew at the Federal Communications Commission and with a steady stream of angry pronouncements regarding specific reporters and media outlets and journalism in general. At a time when the United States needs leadership on behalf of journalism and freedom of the press, Trump is actively steering the discourse in the wrong direction with his claims that “very unpatriotic” journalists are putting “the lives of many” at risk by reporting on government affairs.

In times such as these, it is important that newspapers across the country have chosen to heed the call of The Boston Globe for a show of editorial-page solidarity.

To be clear: There’s no need for feel-good pontificating that merely begs this president to be nice to journalists.

What is required is something far more specific, and far more intellectually and politically honest, than a simple assertion that journalists are not the enemy of the people. There has to be a renewal of the historic understanding of journalism as a check and balance on all power: Republican and Democratic, private and public, political and corporate. This reassertion must be rooted in an essential recognition that no president who takes seriously an oath to “preserve, protect, and defend” the Constitution would say what Trump is saying. But it must go deeper than that.

When John Fitzgerald Kennedy addressed the American Newspaper Publishers Association just two months after he was sworn in as the 35th president of the United States, he explained that “I have selected as the title of my remarks tonight ‘The President and the Press.’ Some may suggest that this would be more naturally worded ‘The President Versus the Press.’ But those are not my sentiments tonight.”

Kennedy went on to tell the assembled publishers, “[My] purpose here tonight is not to deliver the usual assault on the so-called one-party press. On the contrary, in recent months I have rarely heard any complaints about political bias in the press except from a few Republicans. Nor is it my purpose tonight to discuss or defend the televising of Presidential press conferences. I think it is highly beneficial to have some 20,000,000 Americans regularly sit in on these conferences to observe, if I may say so, the incisive, the intelligent and the courteous qualities displayed by your Washington correspondents.”

Kennedy was poking fun at the White House correspondents of his day, who were generally incisive and intelligent, but not always as courteous as presidents prefer.

Yet the point of Kennedy’s speech was a serious one. He had come, as a new president of the United States, to talk about the relationship between his administration and the media. He acknowledged “the dilemma faced by a free and open society in a cold and secret war,” and he spoke honestly of his hope for a measure of restraint in the coverage of particularly sensitive global disputes. But he also said: “The question is for you alone to answer. No public official should answer it for you. No governmental plan should impose its restraints against your will.”

Yes, Kennedy suggested, the administration’s views might clash with those of its inquisitors. But, he added, “I not only could not stifle controversy among your readers—I welcome it. This Administration intends to be candid about its errors; for as a wise man once said: ‘An error does not become a mistake until you refuse to correct it.’ We intend to accept full responsibility for our errors; and we expect you to point them out when we miss them.”

Kennedy’s comments, and those of other wise presidents regarding the relationships of administrations and the fourth estate, have often come to mind since a president who is not wise tweeted in the first month of his tenure that: “The FAKE NEWS media (failing @nytimes, @NBCNews, @ABC, @CBS, @CNN) is not my enemy, it is the enemy of the American People!”

Donald Trump’s words, with their clear echo of totalitarians past and present (New York magazine’s Gabe Sherman called the presidential pronouncement a “chilling” example of “full-on dictator speak”), drew an appropriate response from media outlets that had, too frequently, facilitated the “billionaire populist’s” authoritarian impulses. When the whiniest of Trump’s initial appointees, former White House chief of staff Reince Priebus, appeared on the friendliest of the major cable networks, he was called out for defending the president’s language.

“We don’t have a state-run media in this country,” Fox News Sunday host Chris Wallace told Priebus. “That’s what they have in dictatorships.”

“You don’t get to tell us what to do any more than Barack Obama did,” said Wallace. “Barack Obama whined about Fox News all the time, but I gotta say, he never said we were an enemy of the people.”

Priebus is long gone. But Trump is still attacking the free press, still peppering his comments with “dictator-speak” references to enemies of the people. So today’s pushback from newspaper editorial pages is needed. But this cannot be where it ends.

The pushback must come, as well, from everyone who covets the presidency in 2020, and from Democrats and Republicans in the Senate and the House and across America. Those who would lead this country must make it clear that no president of the United States—at least no president who respects that oath to “preserve, protect and defend” a constitution that outlines the essential role of a free press—should be employing the totalitarian language that Trump has chosen to associate with the office.

Even in the most challenging of times, honorable leaders of all parties and all ideologies must recognize, as did John Kennedy, that “Without debate, without criticism, no Administration and no country can succeed—and no republic can survive. That is why the Athenian lawmaker Solon decreed it a crime for any citizen to shrink from controversy. And that is why our press was protected by the First Amendment—the only business in America specifically protected by the Constitution—not primarily to amuse and entertain, not to emphasize the trivial and the sentimental, not to simply ‘give the public what it wants’—but to inform, to arouse, to reflect, to state our dangers and our opportunities, to indicate our crises and our choices, to lead, mold, educate and sometimes even anger public opinion.”