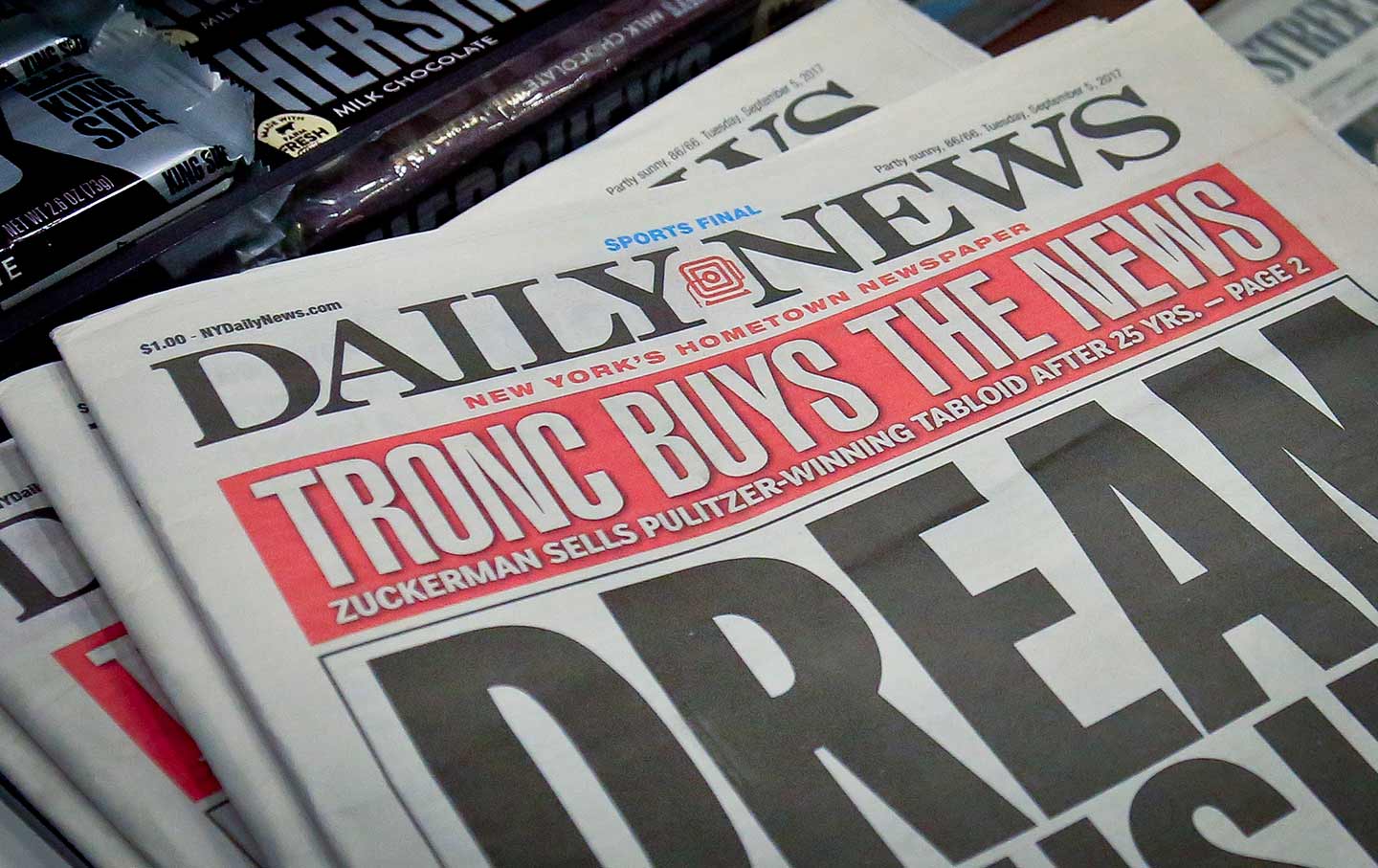 Every once in a while we still hear the bizarre claim that this is a good, or at least adventurous, time for journalism—that this moment of chaos and change, of Trump tweets and investigations, is in some mysterious way healthy for the craft that is supposed to comfort the afflicted and afflict the comfortable.

The optimism is appealing. But the theory is scorchingly false. Journalism is more necessary than ever at a time when the president of the United States treats media outlets as punching bags. Yet, in a country where even the billionaire-sustained Washington Post acknowledges that “Democracy Dies in Darkness,” the necessary sense of urgency is sorely missing.

People who care about the future of journalism need to recognize that the clock is ticking rapidly toward midnight. The Post’s slogan represents a vaguely poetic embrace of a truth that’s as American as the freedom of the press protection in the Bill of Rights: independent, questioning, and challenging journalism is essential to self-governance.

Unfortunately, a line from Bob Dylan’s “Knockin’ on Heaven’s Door” serves as a more genuinely poetic expression of the truth of journalism’s current circumstance: “It’s getting dark, too dark to see.”

There are guileless souls who still point to the baseline functioning of the Post and The New York Times, or the busy chattering of the cable TV channels, and suggest that these are good times for journalists and journalism. But the journalism that matters most, journalism that tells the stories of where we live and who we are, and which might arm us to be the governors of our own cities and states (and the nation that extends from them), is dying.

We got a harsh reminder of this reality Monday, when Tronc, the ridiculous excuse for a media company that owns a number of the nation’s larger metropolitan dailies, laid off half of the editorial staff of the once-magnificent and still exceptionally necessary New York Daily News.

The cuts, coming after previous rounds of cuts, and cuts, and cuts, are turning a newspaper that had one of the more accurate slogans in American media—”The Eyes, the Ears, the Honest Voice of New York”—into a visionless, tone-deaf, whispering version of its former self.

The city’s rising political star, Alexandria Ocasio-Cortez, had the right reaction: “I grew up on the @NYDailyNews and am incredibly saddened by Tronc’s sudden announcement,” she tweeted. “News outlets deserve better than to be chopped up, stripped for profit, or promoting owner interests.”

So does New York.

The 99-year-old Daily News, once the largest-circulation daily newspaper in the United States (2.4 million daily, 4.7 million on Sunday), is now claiming around 200,000 daily readers and around 260,000 on Sunday—along with a reasonable crowd of online readers and Twitter followers. Offering New York less reporting on the news of the city, the state, and the nation is not going to improve those numbers.

Make no mistake about what cuts that go this deep mean: While the news will not stop, a lot of the reporting will. In fact, these are the worst of all possible cuts for New York City. The paper that still did the best job of covering the five boroughs of the city, while maintaining a robust national voice that (with the best front-pages, tabloid or broadsheet, of the era) challenged the Trump administration, the National Rifle Association, and even the telecommunications giants that attacked net neutrality, will now be working with a skeleton crew. It was revealed before this week’s cuts that the paper’s newsroom was “down to only 85 full-timers.”

Now the newsroom is emptier, and so too is the promise that the stories that need to be told will be uncovered and published.

To give a sense of perspective: When the Newspaper Guild (the union that represented reporters and editors, as well as advertising and commercial employees) struck in the early 1970s, its Daily News unit numbered 1,400. To give another sense of perspective: In 1970, New York City had a population of 7.9 million. The city’s estimated population, as of last year, was 8,622,698. So the city that never sleeps has a significantly larger population that will be covered by a dramatically smaller number of reporters.

This is not just a New York City problem, however, this is an American problem. A decade ago, in what was not a particularly great time for the newspaper industry, newsrooms employed more than 71,000 people. Today, they employ barely 39,000. And, as author Thomas Frank says, “The newsroom layoffs never end.” The key word there is newsrooms. We’re way beyond silly debates about “old media” and “new media.” Some of the biggest online news operations in the country are owned by downsizing newspapers like the Daily News.

While digital utopians imagine that online journalism will fill the void caused by newspaper layoffs, that has never been the case. In fact, as the Pew Research Center notes, “Newspaper layoffs have far from abated in the past year, and digital-native news outlets are also suffering losses.”

According to a fresh analysis by Pew, “At least 36 percent of the largest newspapers across the United States—as well as at least 23 percent of the highest-traffic digital-native news outlets—experienced layoffs between January 2017 and April 2018.”

There are still great journalists out there. There are still “scoops” about Trump’s tantrums (if not his tax returns). Working journalists keep working. But their numbers are dwindling in the cities and the countryside. The trajectories are disappointing. The trend lines are veering downward.

It’s a national pattern. It’s got something to do with the rise of the Internet and the digital age. But it’s got something more to do with profitable media conglomerates seeking to secure bigger profits by kicking journalism to the curb. Tronc may not be any good at running newspapers, but as the Poynter Institute noted in May, “despite the sweet payouts to top executives, stop-and-start efforts at digital transformation and some disastrous leadership bungling at The Los Angeles Times, Tronc is the rare newspaper stock that has held its value and actually increased share price—for the year to date and also reaching back a full year.”

The CEOs do not care. But we should. The shredding of the Daily News should serve as a wake-up call. There really are things that can be done to rebuild newsrooms and renew journalism. Bob McChesney and I have written at length about the necessary steps—investing in public and community media, realizing the potential of the Internet with full net neutrality, establishing programs to fund the positions and projects of young reporters, and creating new tax policies to sustain and encourage not-for-profit newsgathering. But the first requirement is one of recognition. It begins with the understanding that “the market” is not working. Journalism’s fate remains in the grips of the hedge-fund profiteers and bumbling corporatists who had been killing the craft by slow cuts—and are now killing it by fast cuts.

Frank reminds us that because newspapers still tend to set so much of the news-media agenda at the local, state, and national levels, the essential step is to understand that the crisis of newspapers and newsrooms threatens not just journalism but democracy.

“I hope people recognize what’s being lost,” says Frank, a writer who relishes the printed word even as it fades away. “But, honestly, I’m not sure it will happen in time.”

He’s right to worry. These are not, as the pep squad imagines, “the best of times and the worst of times” for journalism. They are simply the worst.