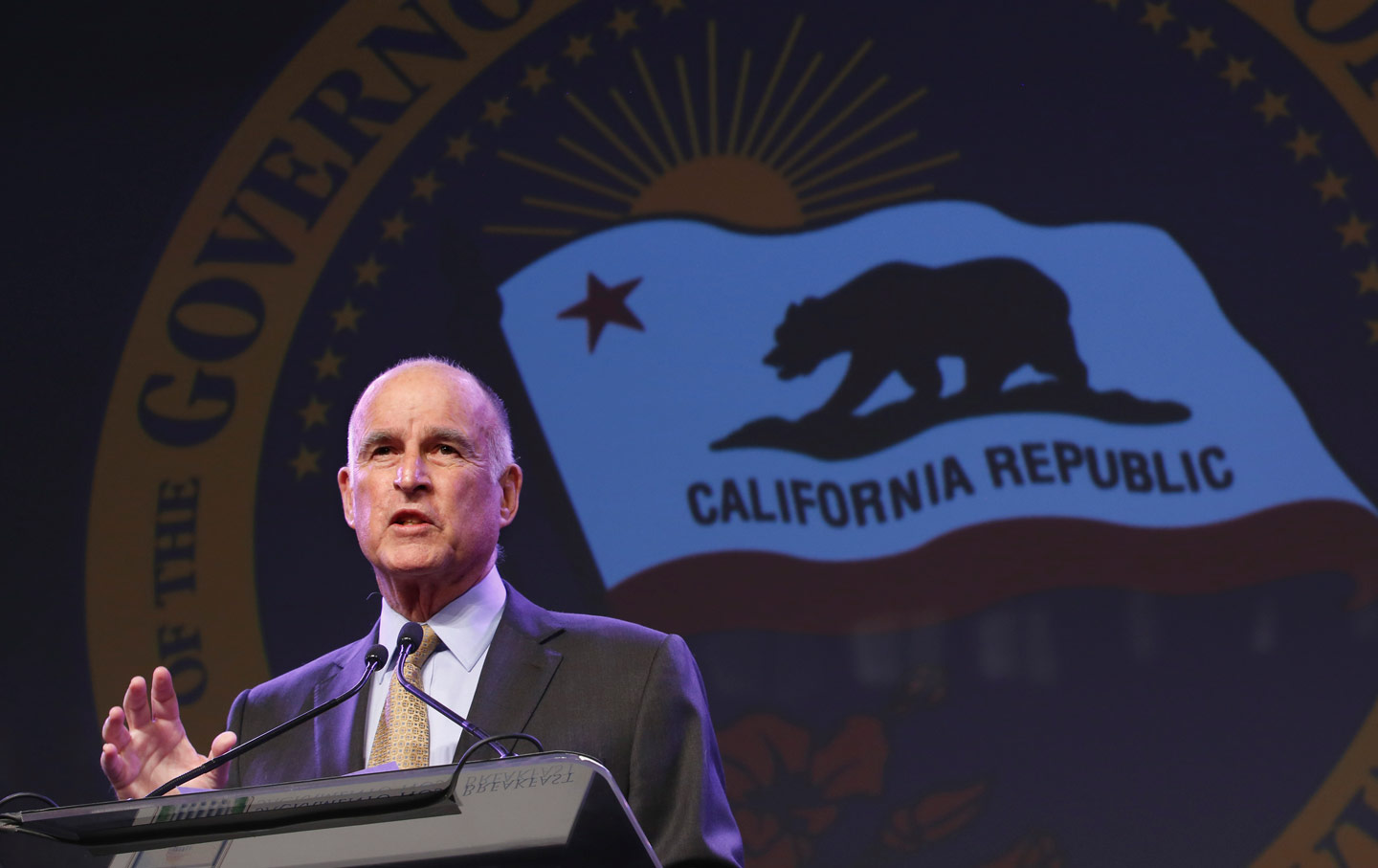 Jerry Brown, a strikingly successful and popular governor in his own state of California whose approach is often held up as a model for Democrats nationally, refused and refused and refused to endorse a candidate during the course of the long race for the party’s presidential nomination. Brown, whose three previous bids for the presidency suggested to some that he might harbor an interest in one last run, and whose relations with front-runner Hillary Clinton had not always been good, kept on the sidelines. Until now.

With one week to go before the critical California primary, the governor has provided Clinton with one of the most important endorsements of the 2016 race. She offers, Brown states in blunt language, “the only path forward to win the presidency and stop the dangerous candidacy of Donald Trump.”

The endorsement is not important because of what it says about Clinton’s candidacy; Brown’s words are respectful, but not particularly impassioned. Rather, it matters because at this late stage in the Democratic competition the governor has delivered a reasoned and knowing argument for a political figure whom Brown once criticized so aggressively that Bill Clinton told the Californian in 1992, “You’re not worth being on the same platform with my wife.”

“I want to be sure that it is Hillary Clinton who takes the oath of office, not Donald Trump.” —Jerry Brown

Brown’s case for Hillary Clinton in 2016 is unlikely to impress ardent supporters of Clinton’s rival, Vermont Senator Bernie Sanders, who has surged in recent California polling and who is drawing large crowds at rallies across the state. Sanders backers will stick with Sanders when the state votes on June 7; in fact, a substantial number of them have already cast early ballots for the progressive challenger.

But Brown still speaks to Sanders supporters in an “Open Letter to California Democrats and Independents” that was posted online Tuesday morning, as he does to voters who might be leaning toward an insurgent campaign that feels in some ways like the governor’s own late-stage bid to upset Jimmy Carter’s march to the Democratic nomination in 1976 and in other ways like the governor’s outsider bid for the Democratic nod in 1992.

“I have closely watched the primaries and am deeply impressed with how well Bernie Sanders has done,” writes Brown. “He has driven home the message that the top one percent has unfairly captured way too much of America’s wealth, leaving the majority of people far behind. In 1992, I attempted a similar campaign.”

However, argues Brown, “Hillary Clinton has convincingly made the case that she knows how to get things done and has the tenacity and skill to advance the Democratic agenda. Voters have responded by giving her approximately 3 million more votes—and hundreds more delegates—than Sanders. If Clinton were to win only 10 percent of the remaining delegates—wildly improbable—she would still exceed the number needed for the nomination. In other words, Clinton’s lead is insurmountable and Democrats have shown—by millions of votes—that they want her as their nominee.”

That is the sort of conventional wisdom that Brown once challenged, especially in 1976, when he opened a late-stage bid for the Democratic nomination at a point when Carter had established a clear lead. And in 1992, in those bitter debates with Bill Clinton, Brown had no qualms about suggesting that Democrats ought to consider his maverick bid because he would be a stronger November contender.

Brown provides something of a model for Democrats who haven’t been enthusiastic about Hillary Clinton to back her.

But Brown’s own experience—his challenges to the party establishment in 1976, 1980, and 1992 fell short—appears to have given him a different perspective about the dynamics of primary and general elections. Whatever the polls may suggest now, the governor says he is of the view that Clinton is better prepared to trump Trump in November.

Once dismissed as an overly idealistic political figure, Brown has emerged in his latest incarnation as a progressive pragmatist who maintains a tight focus on what he sees as politically possible. He speaks as a man who did his time in the political wilderness before a comeback that has made him the mayor of Oakland, California’s attorney general, and now a governor widely credited with ably managing the affairs of a state that just before his election had been labeled “ungovernable.” He wins statewide races with ease, gets voters to back taxes on millionaires and billionaires, and uses the money not just to balance budgets but to invest in education and infrastructure. And he is moving California into the front of the debate about climate change.

Brown has reason to be confident about California politics, which he has mastered over the course of an electoral career that began almost 50 years ago. But he has concerns about the rest of the country, and those concerns clearly influenced his decision to back Clinton in the Democratic race.

Indeed, the rise of Trump, and the threat of a Trump presidency, emerges as a central concern in Brown’s late-stage endorsement. And the endorsement, in turn, provides something of a model for Democrats who have not always been enthusiastic about the Clintons, or other established Democrats, to argue for Hillary Clinton as a 2016 Democratic nominee. That model has meaning for Democrats far beyond California.

“[There] is more at stake than mere numbers,” Brown writes with regard to the details of the Democratic contest.

The Republican nominee, Donald Trump, has called climate change a “hoax” and said he will tear up the Paris Climate Agreement. He has promised to deport millions of immigrants and ominously suggested that other countries may need the nuclear bomb. He has also pledged to pack the Supreme Court with only those who please the extreme right.

The stakes couldn’t be higher. Our country faces an existential threat from climate change and the spread of nuclear weapons. A new cold war is on the horizon. This is no time for Democrats to keep fighting each other. The general election has already begun. Hillary Clinton, with her long experience, especially as Secretary of State, has a firm grasp of the issues and will be prepared to lead our country on day one.

References to Trump bookended the Brown endorsement, which dominated the political news Tuesday morning in California and nationally. He opened it with his description of Clinton’s candidacy as “the only path forward” in the race against the presumptive Republican nominee and closed by declaring, “Next January, I want to be sure that it is Hillary Clinton who takes the oath of office, not Donald Trump.”