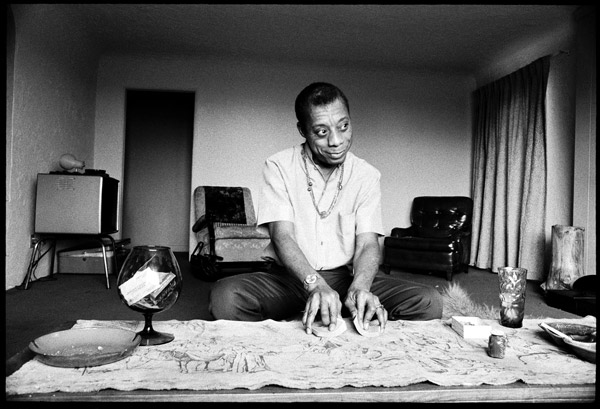 These are ripe times to read Baldwin. Not just the essays on racist policing; those are, in a way, too easy. “A Report From Occupied Territory,” which appeared in The Nation, burns hot a half-century after it was published. That its depiction of black vulnerability and police volatility could describe the contemporary scene; that its central metaphor of occupation is not too hyperbolic to have been echoed by Eric Holder last year, nor its concern with personal disintegration too dated to anticipate Ismaaiyl Brinsley; that even its particulars (“If one is carried back and forth from the precinct to the hospital long enough, one is likely to confess anything”) feel gruesomely fresh in light of known CIA torture regimens—all of these, enraging as they are, only confirm what we already tell ourselves in weaker words.

The police are brutal, the government is brutal, the populace is aroused (taking to the streets) or accommodating (switching from CNN to Homeland to football), brutalized or brutal too. America, cauldron of damaged life.

Baldwin wrote “Report” in 1966, about Harlem, not Staten Island; during the war in Vietnam, not the “global war on terror”; amid the dim promises of the Great Society and a Top 40 soundtrack playing “The Ballad of the Green Berets.” We may study that past, track today’s news and shout the louder, but that is not why Baldwin is the most important American writer of the twentieth century, or why we should read him now.

What constriction or failure of perception forced her to so depend on the description of brutality—unmotivated, senseless—and to leave unanswered and unnoticed the only important question: what it was, after all, that moved her people to such deeds?

The “her” refers to Harriet Beecher Stowe, the “protest novel” is Uncle Tom’s Cabin (and secondarily Native Son), and Baldwin ventures the question that he would plumb his whole life: Who are we, as individuals and Americans, and what are our responsibilities? That “who” for Baldwin was no flimsy thing. It involved spirit and flesh, history and what we do with it, both in our intimate relations and in social, common life.

Uncle Tom’s Cabin fails, in his reading, the way so much well-meaning protest does. It is so busy crying “This is horrible!” that it does not trouble to inquire into what makes those who have executed that horror, and who maintained, benefited from and accommodated to it, do the things they do. A protest novel closer to him, Native Son, disappoints because Richard Wright, its author, has so constricted the frame of social life to fit white categories, so reduced Bigger Thomas to his fears and hatreds, that Bigger “admits the possibility of being sub-human and feels constrained to battle for his humanity” in the only available arena, violence. In either case, what the protest writer offers is a victim, maybe a saint (Tom) or a sinner (Bigger), plenty of villains but no demand on thought as to the roots of villainy or the effort required of us to live in defiance of it.

What any of this has to do with the present is superficially plain. Stowe’s catalog of cruelties evokes the Senate’s partial catalog of CIA tortures and any itemization of police killings. The latest fashion for martyrs and monsters is on display in the bulletins from Paris, absent the record of horrors visited on the Arab world by the United States, its allies and creatures every day for decades. We might trace the roots of official violence to imperialism, capitalism, oligarchy, white supremacy. The words are not incorrect, but they are insufficient. And here is where Baldwin is hard.

Money, he writes elsewhere, is not sufficient to explain the deeds of white people in the time of slavery, or in the dehumanizing system that “Jim Crow” doesn’t begin to define—just as, in our time, profit and empire were never sufficient to explain why multihued majorities of Americans backed the organized killing of strangers after September 11, 2001, and the designation of a worldwide class of people as subhuman. They do not explain why Americans adapted to the prison state or why, to take a banal example, Sony and everyone involved in The Interview figured it was a good bet that Americans would find assassination funny. White supremacy cannot fully explain the culture of police departments, or the decision by some cops to behave like robots toward New York’s mayor, or President Obama’s penchant for murder-by-drone in the darker nations, or any routine instance of white entitlement. Oligarchy cannot explain people’s apparent contentment with only a pantomime of democracy: free expression as the freedom to insult.

Baldwin does not say that systems of power are unimportant. He insists that liberation is also a mandate on individuality: how one separates oneself from the “habits of thought [that] reinforce and sustain the habits of power”—in essence, how one comes into his or her humanity.

Baldwin came into his, or began to, as a black child given the charge of successive black children. As a poor child introduced to the world of the arts while mortally aware of the world of privation. As a man-child when a 38-year-old Spanish-Irish racketeer fell in love with him. It was a dangerous love in 1940; it would be today. It made him feel beautiful for the first time, and, though not without anguish—a word that appears frequently in Baldwin’s explorations of human relations—this love shattered “all of the American categories of male and female, straight or not, black or white” that work to define the totality of a person and so to thwart self-definition. “I will be grateful to that man,” he wrote, “until the day I die.”

The culture has not ceased trying to reinforce those categories, to which we may also add “poor or not, American or not, Judeo-Christian or not.” It was always bent on categorizing Baldwin: a black writer, a homosexual writer, a black writer who wrote a homosexual novel, a writer with a “juvenile” obsession with sex (as Langston Hughes put it), a melodramatic “Harriet Beecher Stowe in blackface,” as Henry Louis Gates Jr. said in a splashy, rather pitiful attempt to demolish the young Baldwin’s essay fifty-seven years after the fact.

Gates’s flirtation with gay-baiting would not be worth mentioning (it was in 2006, after all) if his critique did not so precisely mirror mass culture’s shallow conception of sex, as opposed to Baldwin’s capacious view of sexuality’s role in the creation of the self and society. The young Baldwin had written that in Stowe’s treatment, Uncle Tom had been “robbed of his humanity and divested of his sex.” He did not mean, as Gates damply inferred, that Tom was sexually impotent, not a “real man,” who presumably shtups and flexes and shtups again. “Sex,” as anyone who has seriously read him knows, meant far more to Baldwin than the act—though perhaps no one has written so well and so frankly about lovemaking and the body’s ability to express what words cannot or dare not. “Carnal knowledge” in the old sense—knowing another, and so perhaps oneself, nakedly—gives a better sense of his concerns. Tom was deprived of such knowledge because he was a cardboard saint. Stowe could not but deprive him because she could not see him. Because she could not see him, as a figure of complexity, of ethics and desires and the jumble of sometimes competing qualities that make up human personality—in other words, as a man—she could not really see his tormentors either, “her people,” white people, or begin to fathom the sources of their inhumanity and complacence.

Baldwin’s writing hardly settles the question of why America developed its particular habits of power, or why those persist; why it’s so easy still for race to blind us, class to confuse us, sex and gender to trap us; why as a nation we are staggeringly cruel yet stubborn about our innocence; why love is so hard. His essays and novels do, however, prod us to assess our habits of thought.

It is not simple, this assessment. If so many of his fictional characters seem incomplete, alienated from one another, from their own deepest desires, uneasy in their skin or too easy until events disrupt their cozy assumptions, it is because they are ordinary people, prone like us to self-deception, scarred like us by history and scratching toward something authentic. As the story ends, they may have failed to get there; they may be left in midstream. If they’re left alive, chances are they have fought their way out of cliché, which, while not the same as having succeeded, is a necessary beginning—cliché being another name for capitulation to what is.

We should read Baldwin because what is—the world of power in its many forms—is barbaric but inventively adept at enlisting our consent. No other American writer dissected the problem of the color line with such intimate and ferocious grace, and no other so embodied the convergence of liberationist energies that saved the culture from utter rot. The problem of the twentieth century continues into the twenty-first; the promise of liberation—full-fledged humanity—still calls to us; rot hurries near. We need all the help we can get.