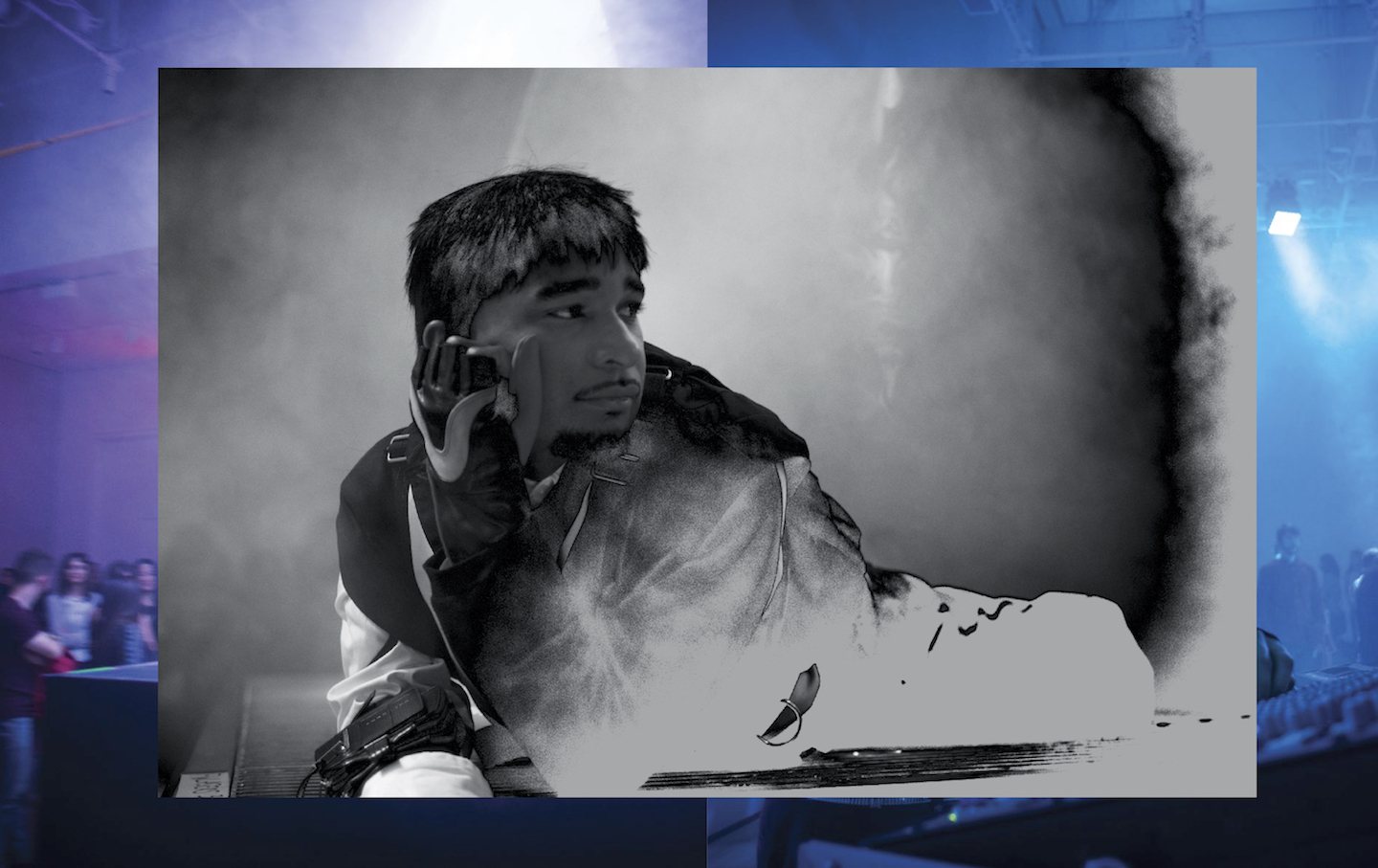 “I’m dramatic,” artist Jacolby Satterwhite tells me, tearing up, one Monday afternoon in the Red Hook neighborhood of Brooklyn. Two weeks before the opening of his solo show, You’re at home, at Pioneer Works, we’re sitting behind a desktop computer in his temporary studio, a floor above where his digital performances and 3D-printed sculptures will be exhibited. Satterwhite is dramatic, sure, and the same has been said of his work: philosophically twisted, performance-based digital projects that mess with the themes of sex, sound, labor, public space, and the body. For over a decade, Satterwhite’s wild universe has been punctuated by musical collaborations with the rapper Trina, the DJ Total Freedom, the singer Solange, and on his latest release—a chilling trip-hop-inspired album called Love Will Find a Way Home—the producer Nick Weiss.

His most constant collaborator, however, has been and continues to be Patricia Satterwhite, his schizophrenic mother, who died in 2016. As her mental health deteriorated, she created an impressive archive of drawings, song lyrics, and recorded melodies. “I didn’t understand how poignant that practice was, as this cathartic self-care ritual that went into place when she couldn’t get insurance or proper mental health help,” Satterwhite recalls. He’d been creating publicly with her work for years and working within her world even before he knew what his art practice really was. Take his Country Ball, 1989–2012, a video that re-creates his family’s VHS recordings of a Mother’s Day cookout using CGI animation; or The Matriarch’s Rhapsody, his 2013 solo exhibition at the Monya Rowe Gallery, where he made 3D sculptures of thousands of his mother’s drawings; or En Plein Air: Music of Objective Romance, an immersive album presented at the San Francisco Museum of Modern Art, where he repurposed hundreds of his mother’s a cappella recordings of pop, gospel, and folk music.

To be clear, Satterwhite isn’t crying because of his mom. He seems like the type of person to have high-grade emotional epiphanies every other day. “It’s just been a really crazy time,” he says. “These shows are getting me out of my mind and getting me back to myself,” he adds, referring to You’re at home and its sister show, Room for Living, which just opened at the Fabric Workshop and Museum in Philadelphia.

Here is one such epiphany: Satterwhite abandoned painting after graduate school, citing its unyielding attachment to the Western canon, to which a black artist is often conscripted to “respond.” After this realization, he went back to South Carolina, where he was born in 1986. “I felt like the only way I could have agency as an artist was to center my body,” he tells me. “That’s when I came to performance art. Then, when I started to look at my mother’s drawings and I started to look at her music recordings, I realized these are basically blueprints for my performance strategies.” Satterwhite is often described by critics as working in an Afrofuturist register: cyborg fiction and a kind of plush queer abjection. But his work is really more about history, about how the global stories of slavery, capitalism, and environmental destruction have led us to the present. As his mother sings on the hypnotic track “Blessed Avenue,” “How could it be? I don’t know…. How did I get here in this place?”

What’s so intriguing about Satterwhite’s project is that his relationship to his mother expands beyond that of muse or inspiration. He takes stock of her musical and artistic production and views her as a collaborator, an artist and thinker in her own right. “It’s not really a sentimental tribute to her,” he insists. “I hate when people say it’s a tribute. It’s not a tribute—it’s therapy. It’s just the way I look at the world.” Satterwhite’s resistance to easy sentiment in his artistic relationship with his mother leaves him teetering on the edge of a black radical leitmotif of maternity while giving her authorship.

At Pioneer Works, Patricia Satterwhite has a room of her own in the exhibition space, where her lyrics and drawings are on display. Her voice wafts through the entire first-floor gallery area, as Birds in Paradise (2017–19) plays on the main screen. Scored to Love Will Find a Way Home, the hour-long series moves through European and West African iconographies—the Roman Coliseum, animated Pegasus figures, drone footage from the climate crisis—along with scenes of Satterwhite dancing, voguing, gesturing, and getting slugged with blue paint. Even as—perhaps especially because—the grain of Patricia’s voice is influenced by what Jacolby calls a “crystallized schizophrenia,” the sensorium propelled by the album’s silky electronic production offers an overwhelming beauty. It asks: “Can you dance to this? Can you dance amidst the pain?”

But maybe my questions are the wrong ones. “The questions that are to be asked,” Satterwhite says in a 2015 interview on the making of Country Ball, 1989–2012: “What does a ritual mean? And what does it mean to repurpose and reperform one? How is that utilitarian to the contemporary state of being?”

In person, Satterwhite is as full-tilt as this cascade of questions suggests. He talks in the same breath about the impact of body artist Matthew Barney, light artist Bruce Nauman, and magic artist Ana Mendieta on his own work. “Anything that gets me closer to a therapist,” he jokes about the unhinged quality of his recent interviews. “Put me on blast, honey.” Once I think I’m catching up, he’s likely to stop and say, “I don’t know…. I’m sorry—I’m rambling.” The work is the work, though, and it doesn’t need its creator to explain it. You’re at home is a cornucopia of sorts—of warm neon, thrashing sounds, flashing screens, even his mother’s designs for consumer products rendered into sculptures—all of it more scaffolded than a conversation could ever be.

On a weekday afternoon, Pioneer Works is pretty much empty. I gravitate to the virtual reality listening station, which is set up like a music store of the 1990s, complete with merch (lighters, shirts, posters, vinyl) for sale. I put on the VR headset and time stops. Swimming toward me is a Pegasus figure. I turn around, and I see some dicks swaying around. I’m in the air. I’m in outer space? After about a minute, I feel dizzy. I grab for the record stand, reaching for some sense of the real, and sink to the floor, the VR headset still on my sweaty face. After catching my breath, I realize that now I’m the one who’s crying.