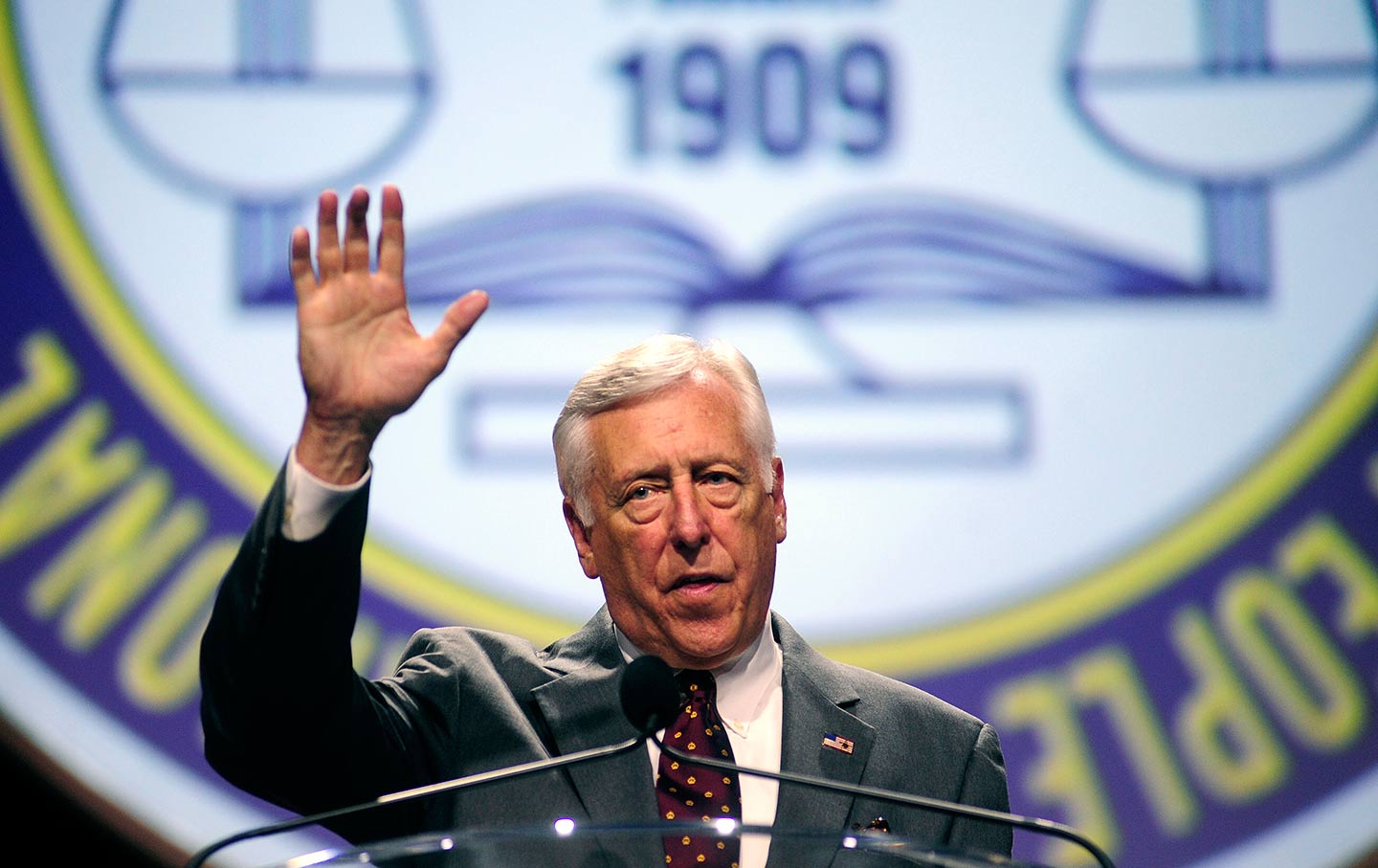 US Congressman Steny Hoyer speaks to the National Association for the Advancement of Colored People convention in Orlando, Florida, on July 15, 2013 . (Reuters / David Manning)

House Democrats will caucus this week to decide who will lead them in the coming term as they gird for the assault coming from Donald Trump and Republican congressional majorities. Representative Nancy Pelosi, leader of the party in the House since 2003, is widely considered a shoo-in for reelection as leader, despite a challenge by Representative Tim Ryan of Ohio. But Democrats have been in the minority since the disastrous 2010 bi-elections. In the House, where the majority rules, that is the closest thing to six, going on eight years, of house arrest.

A squad of spry septuagenarians leads the party: Pelosi is 76; Steny Hoyer, the whip, is 77; assistant Democratic leader James Clyburn is 76. Pelosi and Hoyer have been in place since 2003. In contrast, the Republican leader, Speaker Paul Ryan, turns 47 in January. It is hard to argue that Democrats represent the future when their leaders have far more days behind them than ahead.

Rep. Tim Ryan has announced essentially a pro forma challenge to Pelosi. Only one problem: Pelosi is virtually irreplaceable. She’s the most skilled in unifying the caucus and gearing it up to fight. She is experienced and whip-smart, vital in the upcoming negotiations over budgets and the Trump agenda. She’s the only one in leadership that the progressives in the caucus will trust to draw the right red lines. She is by far the most prodigious fundraiser in the House, reportedly bringing in over $141 million for House Democrats in the last cycle. Pelosi is the wife of a San Francisco millionaire, beloved in Silicon Valley. But she has the rock-solid values of a Roosevelt Democrat. Republicans mocked her as a “San Francisco Democrat” when she was first chosen leader. They soon discovered that she was the true heir to her father, Tommy D’Alesandro, the legendary Baltimore mayor beloved by working people. Pelosi isn’t the best public speaker or the best on television, but Democrats would be hard pressed to replace her leadership.

The obvious course isn’t a futile attempt to dislodge Pelosi but a concerted challenge to chief whip Steny Hoyer, Pelosi’s number two. Hoyer is everything young people hate about Democrats. He’s a career politician. He graduated from law school in 1966 and became a state legislator that same year. He’s the chosen Democrat of the lobby crowd. He was favorite of the Southern Blue Dogs until they got wiped out as Republicans became the party of the white South. He was celebrated by the New Democrats for supporting Bush’s invasion of Iraq, the biggest foreign-policy debacle since Vietnam. He’s the champion of corporate trade deals, the stalwart of Wall Street’s deficit fixation, the useful idiot of Republicans hankering for a grand bargain that cuts Social Security and Medicare in exchange for token infrastructure spending. He’s a corporate Democrat of the party’s past, not a populist Democrat of its future.

He and Pelosi hold each other in high disregard, and Hoyer won’t hesitate to undermine her if it fits his purposes. He is exactly the wrong person to be in leadership as Democrats rally to oppose Paul Ryan’s efforts to turn Medicare into a voucher program or to find ways to cut Social Security.

Hoyer retains his position mostly because he raises lots of dough from corporate and union PACs that he distributes to his colleagues. Arguing that Hoyer would be a lock to replace Pelosi were she to retire, Representative Gerry Connolly, one of his loyalists, inadvertently exposes Hoyer as an empty suit, arguing that “Everybody kind of feels he’s earned it. It’s his turn. He’s been a loyal lieutenant [not] and an able whip and leader.” It’s not that he stands for anything, or leads anything. Hoyer has raised dough for members from various PACs—and “it’s his turn.” Hard to make a more compelling argument for retiring him from leadership ASAP.

So elect Xavier Becerra, the 58-year-old leader of the Democratic Caucus, or someone else from the next generation to take Hoyer’s place. Becerra isn’t a Sanders Democrat, but he understands that Democrats have to protect Social Security and Medicare. He opposes the deficit fixation of Pete Peterson and the austerity Democrats. Let Pelosi groom him or his equivalent to succeed her. Make him a leading spokesperson for Democrats as they challenge the fake populism of Trump and foil Ryan’s assault on Medicare and Social Security.

Pelosi has always recognized the need to lift up younger members. She groomed Christ Van Hollen to be her replacement, but he got tired of waiting and bolted to the Senate. Now she should use her influence to prepare new leadership, while removing someone who personifies where Democrats go wrong. It is time for younger Democrats to step up. Stop deferring to the entrenched leaders. Get rid of Hoyer as a demonstration that the old New Democrat neoliberalism is part of the party’s past, not its present or future. It’s far past time to move on.