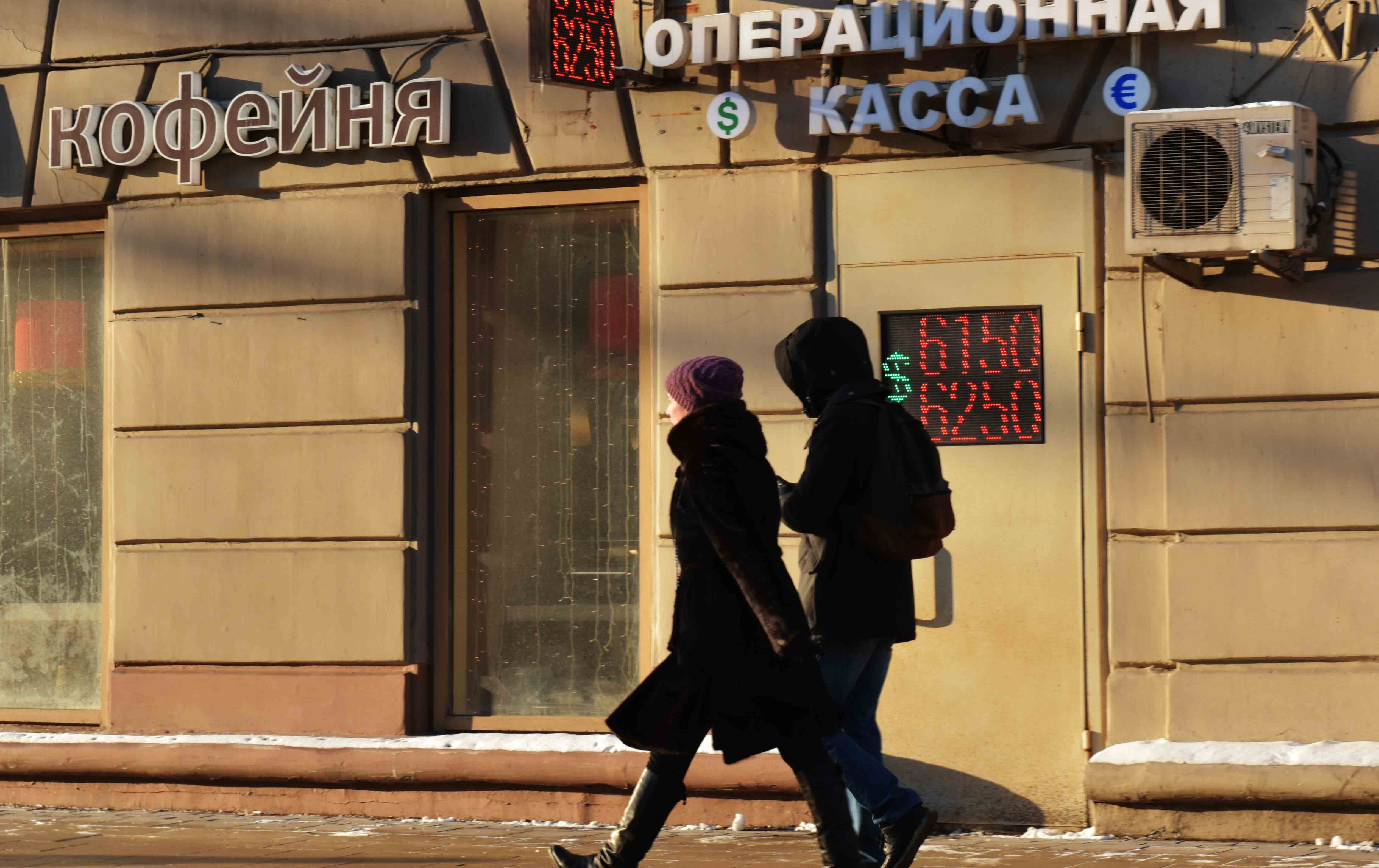 During Russia’s extended Christmas holidays, in a town near Moscow, an unemployed man stabbed his potential employer for political reasons during a friendly meal. The employer, who owns a gas station, said that Russians live poorly because of low productivity—that is, a US worker has to work 30 minutes to earn enough to buy a bottle of the people’s favorite drink, while it takes 2.5 hours in Russia. This incident did not make the national newspapers or TV, and fortunately, everyone survived.

This article was translated by Antonina W. Bouis.

People began talking about such politically motivated incidents in 2014, as soon as the anti-West propaganda campaign began in the mass media in connection with the conflict in eastern Ukraine—there were at least two deaths resulting from drunken brawls between “patriots” and “cosmopolites.” But then these issues were somehow forgotten.

But facts are facts—many Russian citizens seem to be losing the ability to have a normal discussion about politics, our society, and the world outside Russia, even in our long-standing ironic mode. This is worrying.

It is worrying that completely literate people, competent in their own spheres, are inundating one another with filth on social media just because they do not agree on specific issues. The issues are varied—raising children, abortions, Crimea, Putin, Trump, prices or housing taxes—it doesn’t seem to matter.

The level of ferocity of these exchanges, and the complete absence of political correctness, is off the scale, making you question the mental health of the opponents.

Another side of the issue is the total absence of any reaction not only on the part of the authorities, but also of people in show business and business in general, to criticism in the media. As Lidia Grafova, a legend of Russian journalism who spent the last 25 years fighting for the rights of migrants to Russia from countries of the former USSR, noted astutely of those in positions of power: “In response to freedom of speech, they apply freedom of listening,” that is, they do not want to hear anything that journalists and human rights activists have to say.

This is happening in a country where censorship has been illegal for the last 25 years, where freedom of speech is a constitutional right—the victory of perestroika and the realization of the long-held aspiration of intellectuals and writers, who dreamed of freedom for almost 300 years!

In the era of the Internet and digital technologies, when essentially nothing can be hidden for long, the misfortune is not only that the authorities don’t want to hear—people don’t want to know the truth. Here’s the most recent episode: the publication on the Internet of lists of people who were part of the mass executions in the Stalin era was met with resistance from ordinary Internet users—they did not want to see the names of executioners or the details of the executions! You would think that nothing would be better to awakening our consciousness, the collective conscience of the nation, than beginning a dialogue about our shared tragic past, in order to avoid mistakes and look calmly at the future. To continue the conversations about our common future not finished in the perestroika years. But no, dialogue was not considered honorable. I think that many of my fellow countrymen have lost the very ability for discussion, surrounded by the ocean of unnecessary and aggressive information, and they are not prepared to bring it back. It is so much easier to find an enemy—Europe, the USA—and to blame our problems on them. Especially since our foreign opponents seem to be waiting just for that. So that they can blame Russia for all their ills. The shadows of the new Cold War have appeared over Russia and the world. That is very dangerous.

I grew up during the Cold War, and I remember that time very well and I do not want it to come back. Ever. I remember the total surveillance and the limits of what was allowed, the stifling atmosphere of the time—but I also remember how people on both sides of the Iron Curtain sought paths for human and creative interaction, for overcoming the unnecessary ideological confrontation.

An enormous role in that process was played by academics—historians, literary critics, those who loved and valued Russian and American culture more than passing political interests. In many ways, they were the heralds and messengers of the broad dialogue of Russian and American intellectuals that began during perestroika and involved—for a few years—tens of thousands of the most varied people in our countries: deputies and police, farmers and municipal works, judges and leaders of social organizations, journalists, writers, artists, teachers, schoolchildren and students. This was an incredible time, as a surge of people from both countries rushed to meet one another, over the barriers, toward the future, toward the perfect and happy world.

A school in Moscow that focuses on English, where my son studied, was one of the first to start an exchange program with a school in Seattle—this was an unprecedented experience of friendship and learning for all the children. There were many programs like this in Russia and America in those years, and they helped children from both countries to understand one another, to learn about the multiplicity of environments that exist in our world, and I am certain these initiatives helped them also think about how to make the world better.

I had the good fortune to participate in several joint projects of Russian and American specialists and journalists in the 1990s, as well as in dialogues of women’s initiatives of both countries, and I think that the experience of these dialogues has not been adequately considered. This remains true even though the legacy of these dialogues could help overcome many of the current contradictions we face, including the threat of the coming (or perhaps already present?) new Cold War. It is time to recall it today.

Back then, in the years of the Iron Curtain, things were simpler and more naïve, and the best minds and pens of both countries competed in finding the best arguments, even as they sympathized with their opponents. It was a more honest and open game. And money did not play the most important part. And both sides wanted a true dialogue and real discussion of all the issues.

Today, in the world of “post-truth,” things are not as obvious. The natural impulse toward dialogue drowns in the waves of information garbage, fed by aggression and neurolinguistic manipulation. It is happening everywhere.

I am ashamed and pained to see how stupid propaganda fills the minds of too many ordinary Russians, how totally normal men and women begin to think that America is the main enemy of our country and their personal prosperity. That attitude did not exist in my childhood despite the conflict in Vietnam and even the war in Afghanistan, where my peers were dying. Soviet people did not have a personal aggressive attitude toward Americans, instead there was interest, sometimes envy, and in the perestroika years, perhaps an overly romanticized perception of the American system of government and business. But there was never actual hostility, as there is today.

The interest in personal and professional communication, in dialogue, was the main antidote to relapses of the Cold War for many years. Today that dialogue is disrupted, on both sides. That is the most frightening thing. “Open World” programs are ended, professional exchanges are reduced, contacts in the humanities and the NGO world are sparse. The sanctions against Russia make any form of dialogue more difficult and threaten everyone trying to find interaction. It hurts me to hear that the American administration is planning new sanctions—whom do they help? Politicians set on aggressive conflict? The military-industrial complex of both countries?

They certainly won’t bring anything good to the people, merely exacerbating the situation for those who want to continue interacting. This is doubly certain in Russia. Just the fact of cooperating with an American partner will soon become proof of political unreliability, even if it’s about helping sick children or protecting a rare butterfly. The new “hybrid information war” is growing on both sides, constricting the space of possible dialogue, and that is a deplorable fact.

It hurts me to hear from my American friends that the American media are treating Russia like “the evil empire” that threatens the civilized world, while there is almost no information about the lives of ordinary people and their problems, about the work of public organizations, about how people are trying to improve life and protect their rights—and sometimes manage. Even serious publications sometimes fall back on clichés and unexpected parallels—for example, Gersh Kunztman’s commentary in the New York Daily News, comparing the assassination of the Russian ambassador in Ankara to the murder of a Nazi official by a Jewish activist.

These episodes are probably exceptions, but they stick in my mind and leave a heavy sediment. The virus of aggression, the virus of the new Cold War, spreads like flu, and we must find an antidote.

The only antidote it seems to me is not at all what US congressmen proposed recently, calling for a new war with “Kremlin propaganda” by creating their own counter-propaganda resource. Counter-propaganda, as many years of history tell us, is useless by definition. The only antidote is real dialogue and exchange of opinions, live interaction. Then stereotypes collapse, then come the human intonations that are absent in the mass media and in politics. Journalists and scholars are already talking about this, trying to offer an alternative to growing hostility. A new Russian-American dialogue is more than timely today.

I think we have to try—before it is too late—to return to the simple idea of dialogue and discussion of problems in our common life, which is short for each of us. Dialogue is based on ordinary meetings of people, professionals, peers, and contemporaries. We do not have to agree on everything, but it is important to hear one another. Our interactions are criminally rare, and we don’t know one another at all, despite the apparent abundance of information surrounding us. Let’s try to fix this while there is still time. Let’s try to hear one another. Find new platforms. Revive old ones. We won’t let ourselves be used by politicians and moneybags in the name of their interests instead of our own. Let’s try to insist on the need for real citizen diplomacy. And then, for sure, we will have a chance.