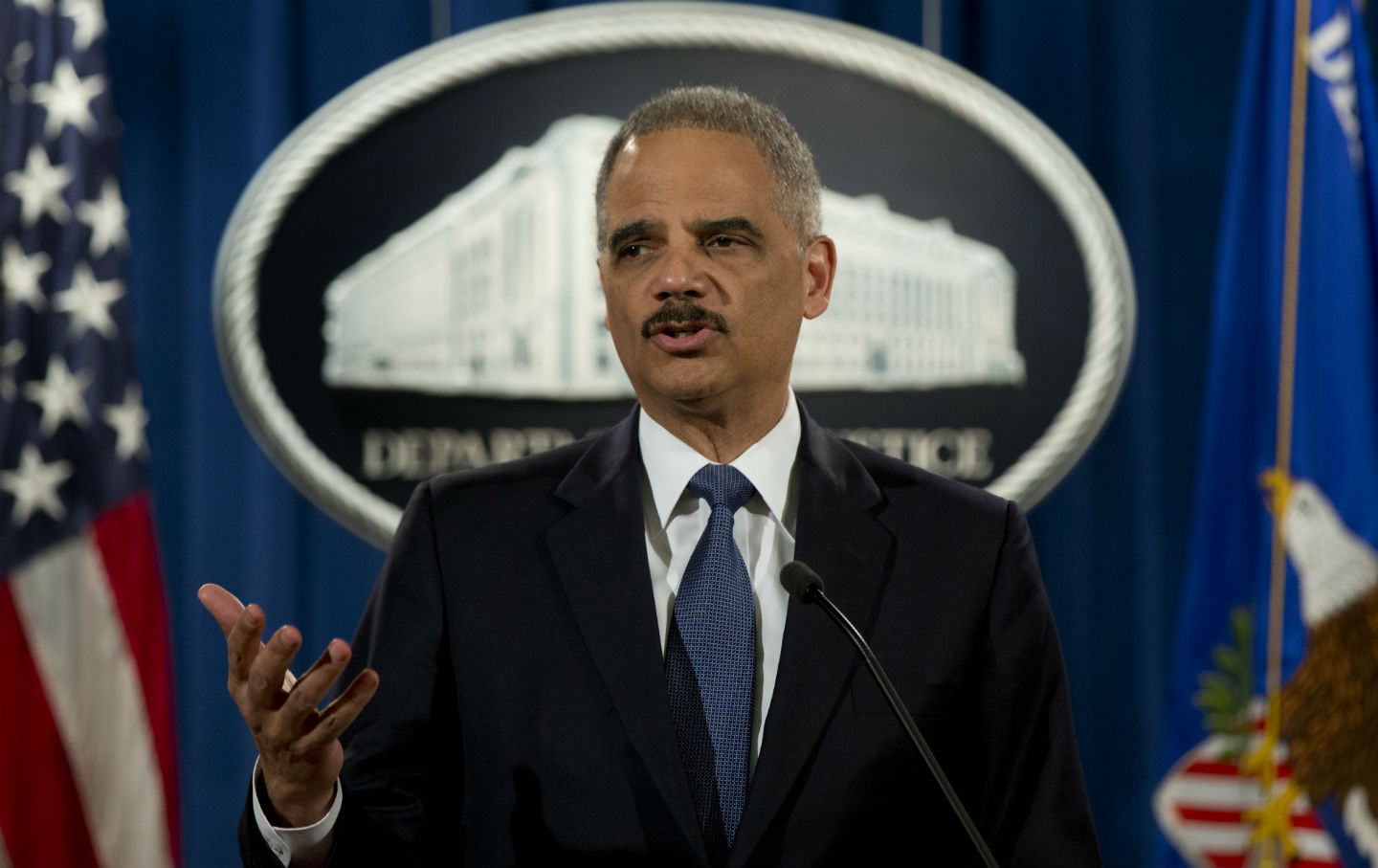 Attorney General Eric Holder speaks at the Justice Department on March 4, 2015, about the findings of the Department's investigations in Ferguson. (AP Photo/Carolyn Caster)

The Department of Justice confirmed yesterday what many of Ferguson’s residents have been saying, and protesting against, for months: the city racks up millions of dollars each year in fines and court fees by illegally harassing its black population. What the federal government did not say, however, is that the practice of criminalizing black people to raise money for police and court systems is not rare; local governments across the country have been doing it for years—ironically, to offset the spiraling costs of the incarceration boom of the past three decades.

In an afternoon press conference, Attorney General Eric Holder described Ferguson as “a community where local authorities consistently approached law enforcement not as a means for protecting public safety, but as a way to generate revenue.” Holder said the pressure to keep revenue flowing has generated constitutional violations at “nearly every level of Ferguson’s law enforcement system”—including inappropriate use of force.

“Once the system is primed for maximizing revenue—starting with fines and fine enforcement—the city relies on the police force to serve, essentially, as a collection agency for the municipal court rather than a law enforcement entity,” said Holder, later adding, “Our investigation showed that Ferguson police officers routinely violate the Fourth Amendment in stopping people without reasonable suspicion, arresting them without probable cause, and using unreasonable force against them.”

Holder’s conclusion, coming after an in-depth, six-month investigation in Ferguson, could have easily described many cities and local jurisdictions across the country.

As Nusrat Choudhury said in an ACLU statement back in January, “the vicious cycle of linking racial profiling and debtors prisons,” occurs nationally and “in the process, poor people—disproportionately people of color—and their families suffer from the collateral impacts of jailing on employment, and housing.”

In Louisiana and Washington State, for instance, those convicted of a crime are ordered to pay court and processing fees that can add up to hundreds or thousands of dollars. In Washington State, the minimum fees for a felony conviction add up to $800, and in 2004 they averaged nearly $1,400. Poor defendants often wind up indebted and put onto a payment plan where interest accrues. The inability to pay can easily land them back in prison.

As was the case for Kevin Thompson, a black resident of Dekalb County, Georgia. He was put on probation for thirty days, during which he had to pay off more than $800 in fines related to traffic infractions. He describes his experience in an ACLU blog post announcing his involvement in a lawsuit to sue the city. When he was unable to pay in that time frame, he was sentenced to jail time for “violating probation.” The effect on Thompson lasted longer than the jail sentence: “Even after I was released, I felt scared that police might arrest me and jail me again for no good reason,” he stated. “After all, DeKalb County and [the probation company] essentially jailed me for being poor.”

In Michigan, where residents are often jailed over unpaid traffic offenses, the ACLU profiled a mother named Kawana Young in a 2010 report on debtors’ prisons. Young received three arrest warrants for three previous traffic violations: driving without a license, playing her music too loud and having an expired tag. She was jailed five different times because she was unable to pay hundreds of dollars in fines. In Michigan—unlike in Ferguson—data is not yet available on the racial breakdown of who is hit with these fines. But racial bias in traffic stops has been shown in cities across the state. In some towns, such as Ferndale, black people made up 60 percent of traffic stops, even though they’re less than 10 percent of the town’s population.

In Pennsylvania, parents are routinely fined for their kids’ truancy. When one child has more than three unexcused absences from school, parents must attend a truancy hearing where a judge may fine the parent $300, and also demand the parent pay court costs and fees related to the hearing. One school district racked up $500,000 in truancy fees during the 2008–09 school year—prompting the Public Interest Law Center of Philadelphia and the NAACP to file a lawsuit against the district. Not only can a parent be fined, failure to pay can result in jail time—and it has for hundreds of parents. Pennsylvania isn’t alone; other states, such as Texas, arrest and jail kids who have outstanding truancy fines when they turn 17.

So how did all of this start? Ironically, the trend appears to have been driven by the incarceration wave that preceded it. Many of the laws that states now use to impose court fees and fines were passed in the 1990s and early 2000’s. “Jurisdictions began to look for sources of funding to support their criminal justice systems,” explains Alexes Harris, a sociologist at the University of Washington who is researching the topic now. “As a result of…hyper-incarceration that began in the mid-1970’s, systems of government could no longer afford what they were doing. Essentially, policy makers decided to shift the burden of the costs of prosecution, incarceration and criminal justice management onto the backs of the people it processed.”

While the court fees and fines generate revenue, Harris argues they are also about social control. “The legal justification for creating layers and layers of policies that allow courts to assess fines and fees from traffic tickets to misdemeanors to felony offenses is that jurisdictions need money to run their systems of justice. But in practice—in effect—the system turns into a strict system of control, and this control is over poor people.”

The Department of Justice offered twenty-six recommendations for Ferguson’s police and court system, including ending its reliance on arrest warrants to collect fines. The Civil Rights Division will now begin negotiating a reform plan with the city, which will be monitored by a court.

The flames of Ferguson following Michael Brown’s death captured the country’s attention, and brought the Justice Department to town. But what of all the other small and big cities across the United States engaging in the same practices? If we are to look towards Ferguson as a lesson, changes may come only following a sustained grassroots movement from those directly affected.