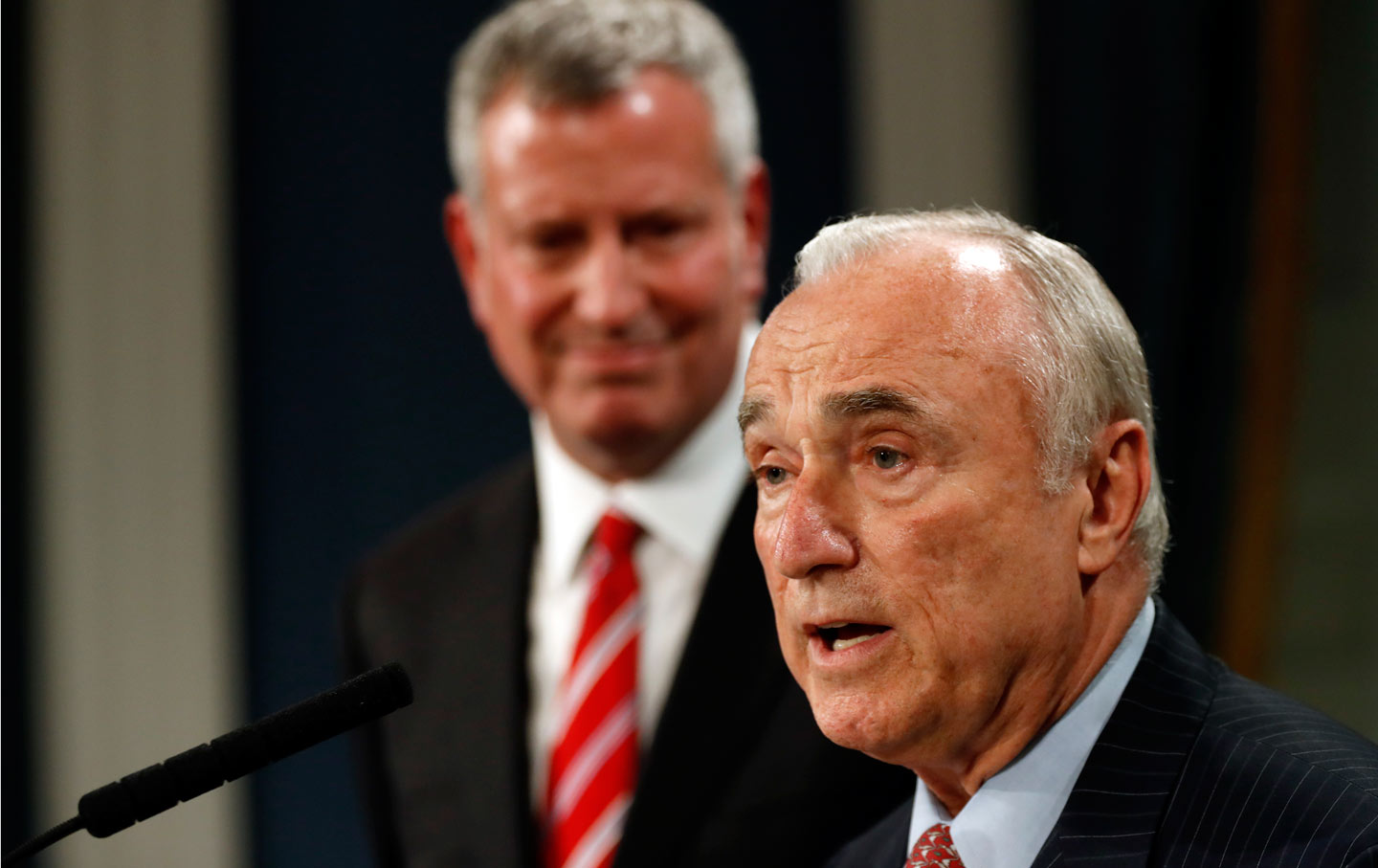 At the end of this month, NYPD Commissioner Bill Bratton will step down from his position. It’s his second time retiring from the post, having served as NYPD commissioner from 1994 to 1997. Upon his election in 2013, Bill de Blasio brought Bratton back to the job, sending a signal to his potential critics that the progressive new mayor would be “tough on crime.”

Bratton will, undoubtedly, go down in history as a legend of American policing. He served as police commissioner for America’s two largest cities—New York and Los Angeles—and oversaw dramatic decreases in crime rates, while implementing tactics that have influenced police departments all over the country, and even some parts of the rest of the world. But how you interpret this legend will depend on what side of those tactics you were on.

A self-described innovator, [Bratton] embraced the “broken windows” theory of policing—the idea that the police could cut down on serious crimes by making it clear that even the trivial ones wouldn’t go unpunished. To hold officers accountable to this philosophy, especially in neighborhoods they had once neglected, Bratton tasked a transit lieutenant, Jack Maple, with developing a management system that kept careful track of arrest and crime statistics throughout the city. The system, called CompStat, short for “compare statistics,’’ was often credited for the drop in crime that followed. By the time Bratton left New York in 1997, New York’s murder rate had fallen by half. Cities from Chicago to Sydney hired Bratton and his protégés as police chiefs and consultants. Today, most large American cities use some form of CompStat.

Yet, despite wide imitation, there still has not been a definitive link made between “broken windows” policing and a reduction in crime. A recent Department of Investigation report that reviewed arrests from the past six years in New York City found no correlation between the rate of misdemeanor arrests/summonses and that for felony crime. Moreover, combining “broken windows” with CompStat—a system that requires officers to log just how many stops, arrests, summonses they make—has put pressure on police officers to make more arrests, and to do so for increasingly trivial infractions. And, as this same Times story notes, “Most of this activity took place in minority neighborhoods.” According to Newsweek, “Arrestees not listed as ‘white’ accounted for 85.7 percent of total 2014 misdemeanor arrests, a decline from 87 percent in 2013. Blacks and Hispanics accounted for some 80 percent of total misdemeanor arrests in 2014 and 81.1 percent in 2013.”

That is Bratton’s real legacy, and it was further legitimized when de Blasio reappointed him police commissioner. Ironically, de Blasio was elected by dint of his opposition to the overuse of stop-and-frisk, a tactic that became more prevalent under Mayor Michael Bloomberg’s police commissioner, Ray Kelly. Stop-and-frisk is a natural outgrowth of “broken windows”–style policing, where innocuous behavior is registered as potentially dangerous criminal activity. By bringing Bratton back, de Blasio ensured that policing would not change, as an ostensibly progressive mayor signed off on the same philosophy championed by “law and order” conservatives. Still, even before returning to the NYPD, Bratton trained, consulted, and influenced so many officers and departments that his imprint on police culture is unshakable.

Bratton institutionalized in police officers the kind of fear and suspicion that killed Rekia Boyd in Chicago, Freddie Gray in Baltimore, Alton Sterling in Baton Rouge, and Philando Castile in Falcon Heights. His is a legacy of arresting panhandlers and kids dancing in subway cars, of Eric Garner’s videotaped death, Akai Gurley’s being shot in a project stairwell, and a pregnant woman’s being placed in a chokehold over her use of a grill. The stuff a noble career in policing is made of.

Who replaces Bratton is irrelevant, because at this point any person “qualified” to do so is a product of his school of policing. The new commissioner, Jimmy O’Neill, has been in the department since 1983, which means he has served under Bratton twice, as well as Kelly, and has stated he plans to continue “broken windows.” And so long as Bratton’s influence continues to flourish, any lip service paid to the idea of police reform will falter, because it will be at odds with the fundamentals he established. Good riddance, for sure, but the celebration of his resignation is sobered by the realization that he isn’t actually going anywhere.