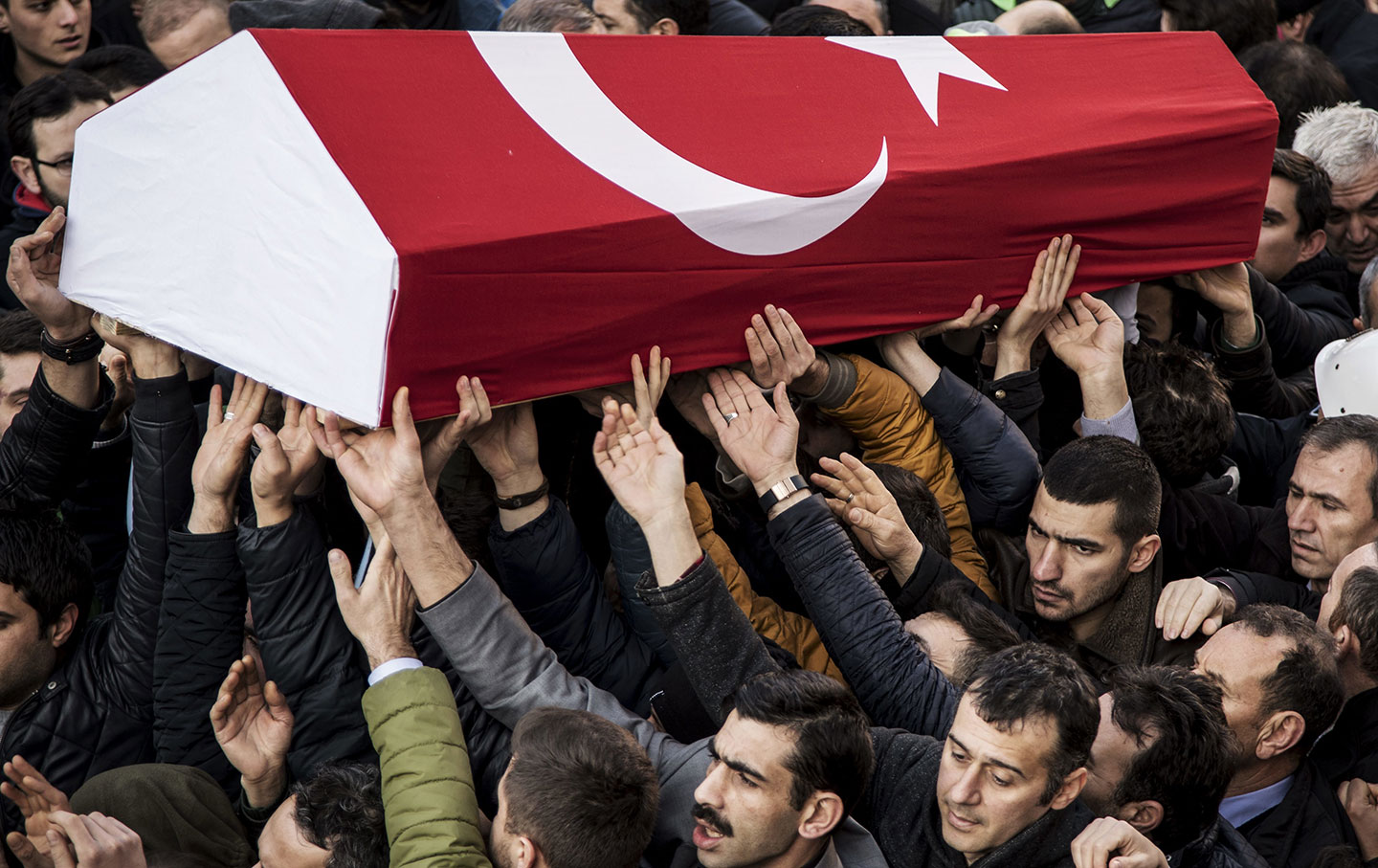 People carry the coffin of Yunus Gormek, one of the victims of the Reina night club attack, during his funeral ceremony, Istanbul, Turkey, January 2, 2017. (AP Images)

Istanbul—As midnight swept across the globe, Istanbul was a city like any other. At the Reina nightclub on the west bank of the Bosphorus, patrons popped champagne corks, celebrating the end of an unusually tumultuous year by dancing the night away to the beats of DJ Abdullah Can Saraç.1

Just one and a half hours into the new year, an armed gunman stormed onto the dance floor, opening fire on more than 600 people gathered in the club, killing 39 and injuring dozens more.2

“People were dancing, having fun,” Saraç recalls. When the shooting began, a friend pulled him down into the narrow space of the DJ booth, where the pair waited out the attack.3

For the next seven minutes, chaos ensued. Those who were able to escape poured out of the club, running through the wet snow, many in high heels and short dresses, as ambulances raced to the scene. Some trapped inside jumped into the freezing Bosphorus to escape the attacker, while others dropped to the floor, playing dead as he continued to fire off multiple rounds. One Lebanese citizen only survived because a passport in his breast pocket stopped a bullet the gunman aimed straight for his chest.4

By the time the special forces had come to evacuate the club, the attacker had fled—leaving behind only his empty Kalashnikov rifle.5

Before long, ISIS claimed responsibility for the attack. “A hero soldier of the caliphate attacked one of the most famous nightclubs, where Christians celebrate their pagan holiday,” read the group’s statement. “They used hand grenades and machine guns and transformed their celebration to mourning.”6

While the attacks were shocking, they were not entirely unexpected. In anticipation of New Year’s Eve, the United States Embassy issued an updated travel warning that advised American citizens to avoid crowded areas and places known to be popular among foreigners. After a year that saw five major terrorist attacks across Istanbul, and 15 across Turkey—not including July’s failed coup—many tourists and expats opted to keep a low profile, wary of spending extended time in large crowds or in popular neighborhoods.8

“Of course, there will always be people out, enjoying the city and the nightlife,” remarks Doğan, a restaurant manager in the nearby Ortaköy neighborhood, just a few streets away from the site of the attack. “But it has been far less crowded around here. More and more people are staying home, just to be careful.”9

While other European capitals may carry Istanbul's allure, none boast its accessibility—and thus its diversity.

Istanbul has not always been this way. Forget about the outdated romanticism about a crossroads between east and west. The reality is that relatively relaxed entry requirements have made Istanbul a home for many people that find it difficult to live or travel elsewhere. Hundreds of thousands of tourists and business people come through the city every year, for everything from sight-seeing, shopping, and business to hair transplants, religious tourism, and concerts. And then, of course, there’s the nightlife.10

While other European capitals may carry Istanbul’s allure, none boast its accessibility—and thus its diversity. Israelis, Lebanese, and Iranians eat at the same dinner table. Syrian, Iraqi, and Afghan refugees exchange stories about starting new businesses in the city. Turkish, Arabic, Farsi, English, Greek, German, and other languages overlap in the same streets on a daily basis.11

For Istanbul’s well-heeled visitors, the Reina only contributes to this image. Billed as one of the trendiest clubs in town, it is a place where alcohol is served liberally and popular DJs spin new music, attracting a celebrity crowd of everyone from Turkish footballers to Bollywood producers and Hollywood celebrities, as well as anyone who presents themselves as elite enough to be in their presence. It is one of the ultimate places in Istanbul to see and be seen, with its intriguing and eclectic crowd, and nights notoriously starting well after midnight and lasting until the sun rises over the Bosphorus.12

Most importantly, it is a place where people from around the world—and, importantly, across the Middle East—can escape the chaos of the region, set aside their differences, and celebrate the same holidays, dancing to the same music, under the same roof. On New Year’s Eve, it is where Lebanese, Israeli, Iraqi, German, Syrian, Tunisian, and many other citizens were injured and killed by the same attacker. It is where their blood began to pool together on the same floor.13

“We let a lot of people in, here in Turkey—especially Syrians and refugees,” Doğan says. “Most of them are good people, but some of them are not.” He is choosing his words carefully. “It hasn’t always been fair for us.”14

ISIS Is a Symptom, Not the Cause, of the Middle East’s Disintegration

Over the past year, the Turkish authorities have worked consistently to improve their reputation for being lax when it comes to security, particularly along the country’s porous southern border, an infamous corridor for foreign fighters traveling to Syria to join the Islamic State. In addition to tightening border security, including building a partial wall along the stretches most often penetrated by jihadists, the Turkish military has become increasingly involved in fighting the Islamic State, in both Syria and Iraq. Most recently, they have intensified their operations in the Syrian town of Al-Bab, where authorities believe the Reina attack was planned.15

Despite Turkey’s attempts to contain the ISIS threat, the psychological impact of yet another massive terrorist attack in Istanbul, after a year of more frequent smaller-scale attacks, is palpable. It’s eerily quiet. Even though the city is known for its traffic-choked streets, it is oddly easy to get around. Few people are in the streets, and the waterfront restaurants, usually packed, have mostly empty chairs.16

“Look around you, almost no one is out, and to tell the truth, I don’t want to be here either,” says Ayşe, one of the street vendors in the Ortaköy neighborhood. “I’m afraid because of the attack, and I’m more afraid when I don’t see people. The situation is very bad.”17

Last year, tourism in Istanbul declined by 40 percent due to the security situation, gravely impacting local vendors like Ayşe, whose income often depends on tourist revenue.18

“I hope it was just a bad start to a better year,” she says with a smile. “Tomorrow will be better. Happy new year.”