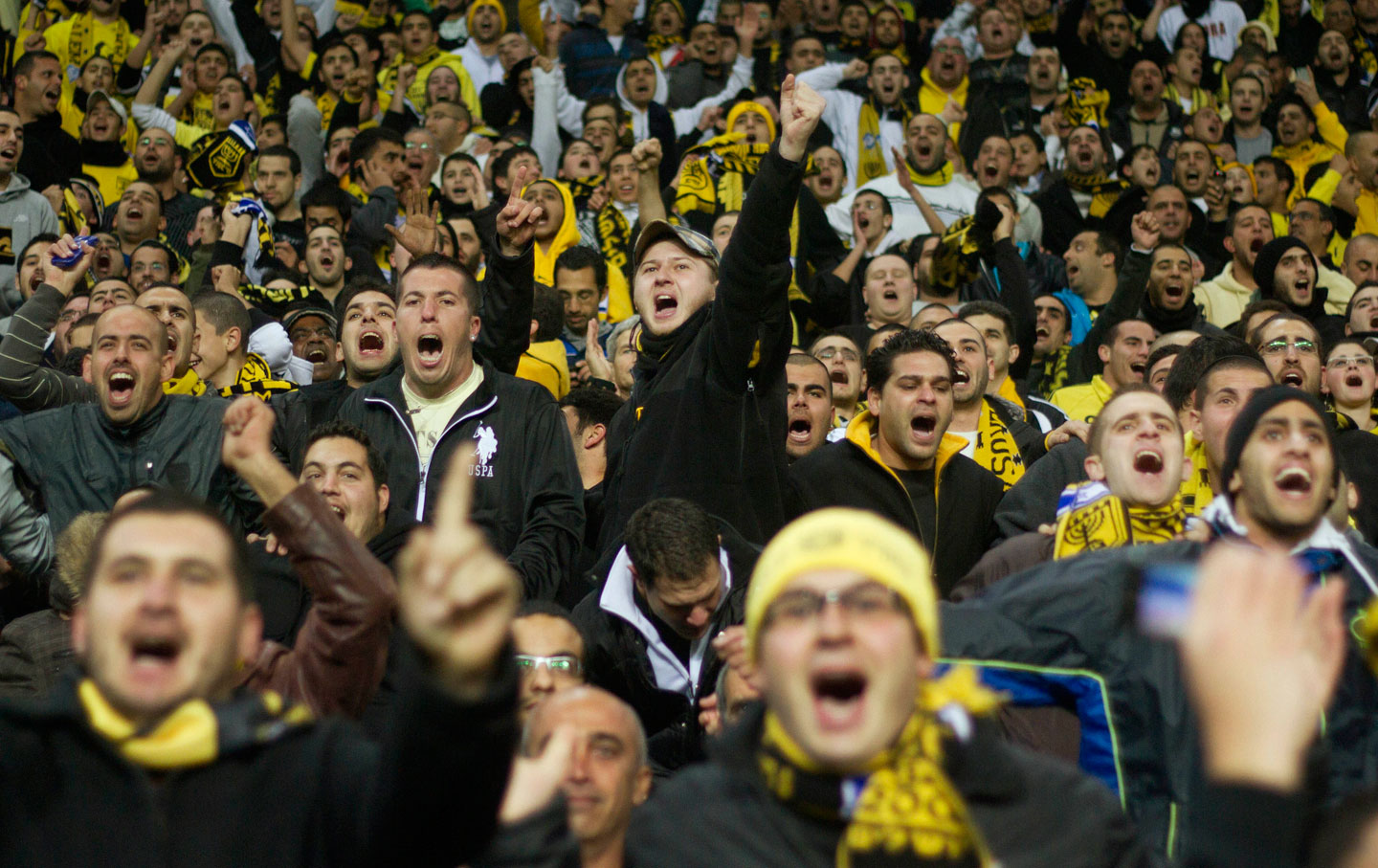 Jerusalem’s most successful soccer team, Beitar Jerusalem, has announced—in celebration of the US embassy relocation to Jerusalem and assumedly in triumph following the massacre of 60 Palestinians in Gaza who were protesting the move—that they are now naming themselves after Donald Trump. In a message posted on their Facebook page, the soccer club wrote, “For 70 years has Jerusalem been awaiting international recognition, until President Donald Trump, in a courageous move, recognized Jerusalem as the eternal capital of Israel.”

If there were ever two entities that deserve each other, it is Beitar Jerusalem and Donald Trump. Just as Trump has a 45-year documented past of racism, the latest chapter being his statement that undocumented immigrants are “animals” (no, he wasn’t just referring to MS-13), Beitar Jerusalem shares a similar history and similar rhetoric. They are known internationally less for their on-field success than their anti-Arab and anti-Muslim hiring practices and fan supporters who engage in racist violence.

It was in the 1990s when this club, whose supporters had always rooted themselves in the hard-right, anti-Arab, anti-Muslim politics of “revisionism,” formed ”hooligan” clubs modeled after the violent skinhead soccer fan formations in Western Europe. (Their admiration for groups that were openly sympathetic to Nazi tells a story all its own.)

It was also in the 1990s when the these “fan clubs” particularly the one most known for racist violence, called La Familia, adopted the slogan and chant, “Death to the Arabs.” Their abuse of Arabs and Muslims was not confined to players on other teams. The club signed black, Muslim Nigerian defender Ibrahim Ndala in 2004. As Samiran Mishra wrote on the Football Paradise blog, Ndala “left the club after just five games because of the torrent of abuse he received from his own fans.”

“I left Betar because the fans abused me…. It was a bitter experience for me. They sang to me ‘son of a bitch,’ ‘Arab, go home.’ In Nigeria, I did not experience this kind of behaviour in my life, and it happened to me only in Beitar, and from the country, I came from, the rivalry was neither political nor ethnic, and because I was a Muslim I could not play Beitar.”

When the team, in 2013, signed two Muslim players, Zaur Sadayev and Dzhabrail Kadiyev, their “fans” set fire to a team office and Sadayev was met with boos and fan walk-outs when he scored a goal. When a fan favorite, captain and goalkeeper Ariel Harush, put his arm around Sadayev and Kadiyev on the field, in a show of support, he became an object of scorn. When Harush spoke out against racism and posted messages of solidarity toward Sadayev and Kadiyev, he was threatened with violence. This continued for several years, and Harush was booed every time he touched the ball. Both Muslim players left after the end of the season. Harush eventually was driven from the team as well.

Fans also chanted anti-Arab chants at Naala, Sadayev, and Kadiyev, which was bizarre, since none were Arab and the club refuses to sign Arab players. This is why Newsweek wrote about the team with the sub-headline, “Jerusalem’s favorite football team has hiring policies reminiscent of Apartheid and Jim Crow.”

Then there was the infamous moment in March of 2012 when hundreds of Beitar “fans” rushed a West Jerusalem mall, chanting “Death to Arabs,” and assaulted the Palestinian custodians who were there to clean up their trash. Mohammed Yusef, one of the cleaners, called it “a mass lynching attempt.” The headline in Haaretz was, “Hundreds of Beitar Jerusalem fans beat up Arab workers in mall; no arrests.”

This is the team now named after the president of the United States of America. I reached out to human-rights attorney and assistant professor at George Mason University Noura Erakat for her response to the conjoining of Beitar Jerusalem and Donald Trump. She said,

“I think it’s quite fitting for a racist soccer team to give homage to a man who encapsulates what Israel has embodied under the cover of liberalism, namely a self-righteous and violent goal of establishing a racial and religious supremacy. This is not just about his embassy move, this is about a shared—and destructive—vision for the world.”

We have seen in other countries the ways that soccer-fan clubs can easily become shock troops of ethnic cleansing. This is Beitar Jerusalem, and they are getting further inspiration from the actions and rhetoric of the president of the United States. They deserve each other, but neither the Palestinian people nor the people of this country deserve either of them,