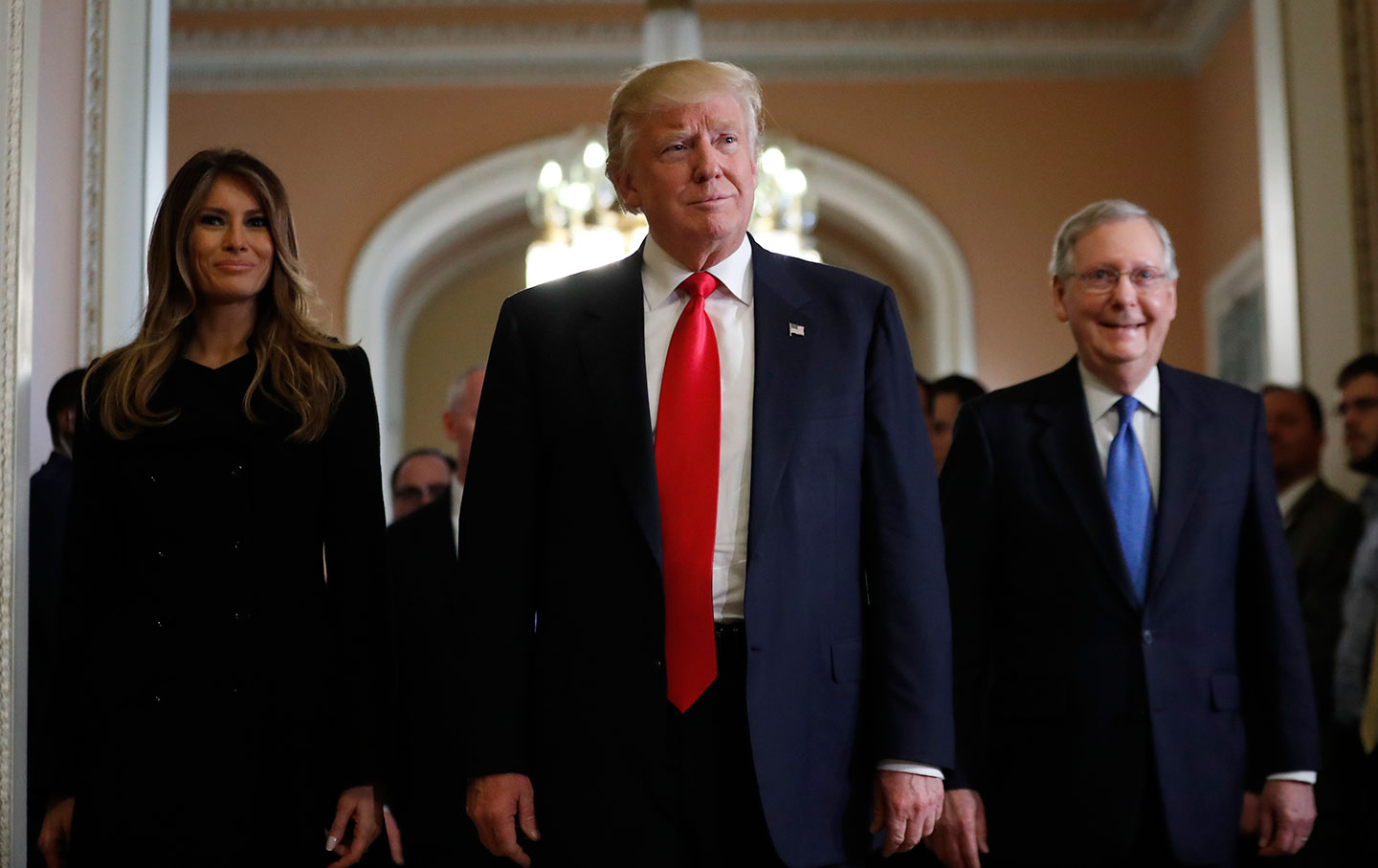 A presidential term lasts only four years, but in the climate, it lasts for thousands. Carbon dioxide is a stubborn molecule: Once emitted into the air, it hangs around, cycling between the oceans and the atmosphere, some of it for as long as hundreds of thousands of years. It means that today’s energy policies will impact the temperature of our planet far beyond any foreseeable future. It means the election of Donald Trump could be the political equivalent of the asteroid that ended the Cretaceous period.

On Wednesday, stocks in the bankrupt coal giant Peabody Energy shot up by nearly 50 percent. Oil shares rose, though more modestly, while solar plunged. The markets’ moves reflect Trump’s campaign promises on energy and environmental policy, which would unleash a torrent of fossil-fuel production: to repeal the Obama administration’s regulations on carbon-dioxide emissions from power plants, as well as other environmental protections; eliminate the Environmental Protection Agency altogether; cut all federal spending on climate change, including funds to the United Nations and R&D for renewable energy and electric vehicles; and to “cancel” the international climate accord reached in Paris last year. According to an analysis by Lux Research, these policies would lead to an added 3.4 billion tons of carbon-dioxide pollution every year, compared to what Hillary Clinton proposed.

“A Trump presidency might be game over for the climate…. It might make it impossible to stabilize planetary warming below dangerous (i.e. greater than 2C) levels,” Dr. Michael Mann, a climatologist and geophysicist at Pennsylvania State University, said in an e-mail. “Hopefully the world will find a way to move forward in combating climate change even if the US refuses to play an active role.”

Trump will be the only head of state in the world who rejects the scientific consensus that human activity is causing climate change—a “hoax,” he’s called it. He’s tapped prominent climate skeptic Myron Ebell, who directs the Center for Energy and Environment at the conservative Competitive Enterprise Institute, to lead his transition team at the EPA, and Mike McKenna, an energy lobbyist who has worked for Koch Companies and Dow Chemical, to head the team at the Energy Department. The fossil-fuel industry is already salivating over the opportunities the new administration presents. TransCanada, the company behind the Keystone XL pipeline, has made plans to meet with Trump’s team to pitch restarting the project. Republican Senator Lisa Murkowski, who chairs the Senate Energy Committee, declared shortly after the election was called for Trump that she will be pushing to open the Arctic National Wildlife Refuge in Alaska to drilling.

How much of this agenda can Trump actually accomplish? He can wreck much of the slow climate progress that’s been made under the Obama administration—but only if he’s committed to doing so. Gutting the EPA would require congressional action and breaking a Democratic filibuster in the Senate. Repealing the Clean Power Plan and other environmental regulations will be more complicated than signing an executive order, and environmental groups will tie up attempts to do so in litigation. A Trump administration could decline to defend the Clean Power plan in court, where it’s being challenged by states and industry groups—Senate majority leader Mitch McConnell suggested this should happen on “day one” of the new administration—though that could draw more litigation. If the case does make it to the Supreme Court, its fate will be decided by a conservative majority including Trump’s nominee to replace Antonin Scalia.

"The nature of our work on climate change is that there are a thousand ways to have an impact."

As for the Paris agreement, Trump can’t immediately “cancel” it. It was specifically designed to withstand the American presidential election, and it would be at least a year before he could formally withdraw the United States. But he could undermine the deal, by letting US companies renege on its commitments to lower emissions. That could leave a leadership vacuum while also blunting the practical effect of the agreement itself, because the individual US plan for reducing emissions accounts for about a fifth of the overall cuts that would be achieved under the accord. More drastically, Trump could pull the United States from the UN Framework Convention on Climate Change, which coordinates international climate negotiations.

Still, it’s not at all clear that other nations will abandon their commitments to climate action. Mike Brune, the executive director of the Sierra Club, told me that, while “we are facing an existential moment,” he is confident in the rest of the world’s commitment to the goals set in Paris. “I think other countries will continue to move forward because they see it in their national interest,” Brune said. “Many countries will see a diplomatic opportunity, a chance to take leadership on global scale—particularly China.”

Brune sketched out a kind of road map for climate action in the age of Trump. One part is defensive: continuing to resist the expansion of fossil-fuel infrastructure across the country, with a transpartisan coalition that includes landowners, environmentalists, and Native American tribes, and by leveraging the legal system. But he emphasized that climate activists “must not stay in a defensive crouch over the next four years.” States, cities, and the market all present opportunities for the climate movement to go on offense. Many states are already moving ahead to meet the requirements of the Clean Power Plan, despite its uncertain legal future, and advocates will press states to pass emissions-reduction plans like California’s. More than a dozen cities have made commitments to rely fully on renewable energy; others could be pushed to do so. Solar, wind power, and electric vehicles are increasingly affordable, and even without federal support they could eventually out-compete fossil fuels on a large scale. And renewable energy initiatives are overwhelmingly popular. “The nature of our work on climate change is that there are a thousand ways to have an impact—through investments, divestment, consumer power, corporate accountability, city, state, regional [policy],” Brune said.

The math is daunting—there’s no way to get around that. Even if Trump preserved the status quo and left the EPA alone, the world is on track to blow past the 2 degree threshold. In order to stay below it, no new fossil-fuel reserves, in the Arctic or elsewhere, can be developed. It’s certain that Donald Trump will not be good for the planet. But how bad he is depends in some measure on what the rest of us do next. Unlike an asteroid, there are ways to slow his approach, and lessen his impact.