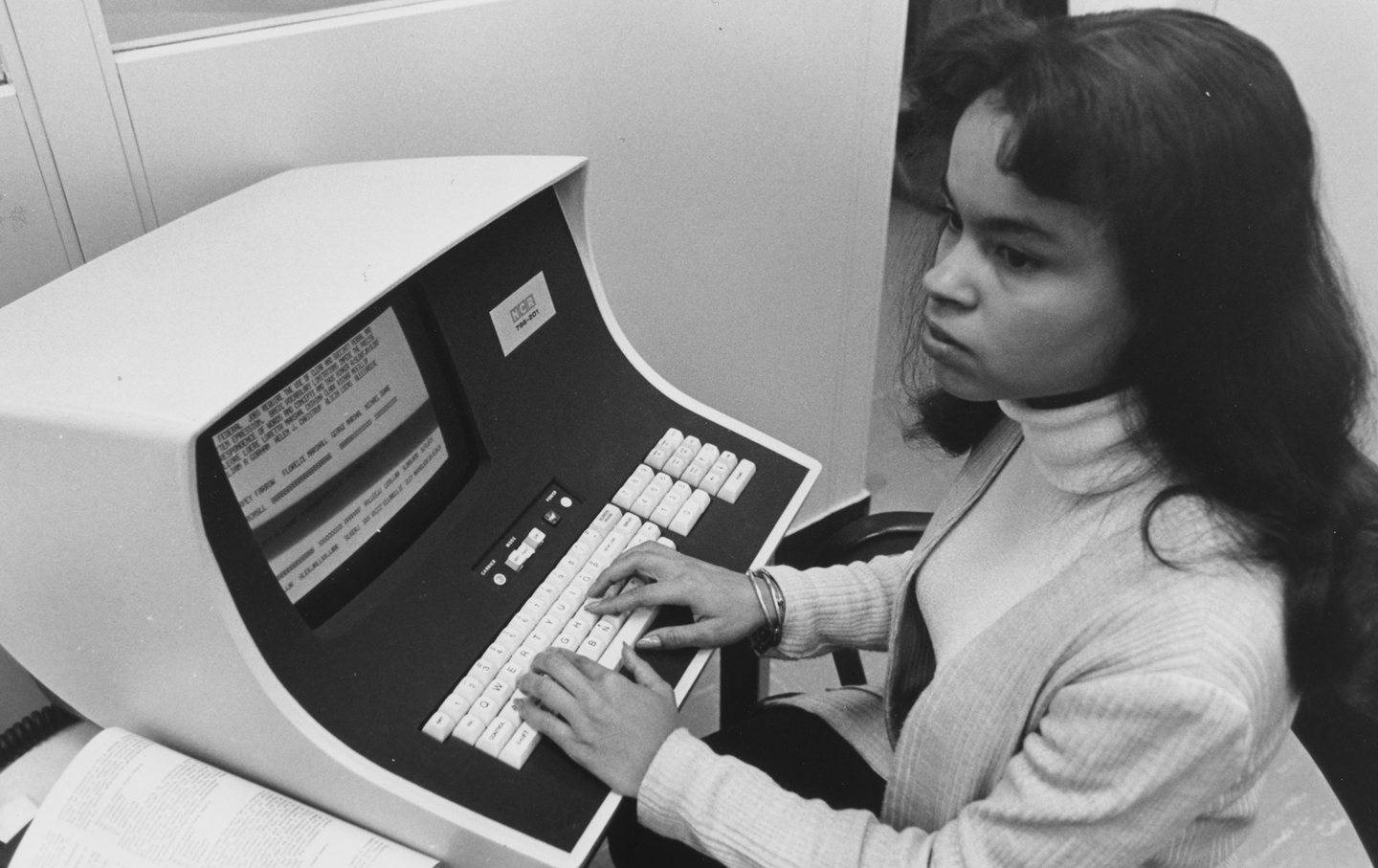 Women's participation in the labor force began to rise steadily in the 1970s. Wikimedia Commons

Since its founding in 1865, The Nation has been a home for writers instigating, reporting on and arguing about struggles for social and economic justice. We have held fast to our “Nation Ideals”— from racial justice to feminism, from a fair economy to civil liberties, from environmental sustainability to peace and disarmament—throughout our 150-year history. During our anniversary year, TheNation.com will highlight one Nation Ideal every month or two. We’ll celebrate by asking prominent contemporary Nation voices to read and respond to important pieces from our archive. This month, we’re celebrating a fair economy for all, and below, Bryce Covert reflects on a 1971 essay by Betty MacMoran Gray on whether feminism can ever be reconciled with capitalism. Learn more about our 150th anniversary events and special content here.

Women and their role in the workplace are set to be a constant drumbeat in this presidential campaign. In Hillary Clinton’s first major policy speech on the economy, she called for the need to “break…down barriers so more Americans participate more fully in the workforce, especially women.” Leaving “talent on the sidelines,” and in particular female talent, she argued, is a drag on the economy. This represents, in Clinton’s parlance, “unused potential” in our capitalist society.

But feminists and capitalism sometimes have an uneasy relationship. In 1971, Betty MacMorran Gray wrote in the pages of this magazine that capitalism makes an odd bedfellow for those seeking women’s liberation. Under capitalism, she says, women will regularly get kicked out of the workforce as unnecessary, constituting an always-contingent pool of labor. “Capitalism, which rarely requires full employment, cannot use increasing numbers of women workers,” she wrote.

Her thesis has not been borne out over the decades since. Between the 1970s and the late 1990s, women’s labor force participation steadily rose. Over 40 percent of women were working when Gray wrote her essay, and by 1999, that share peaked, at 60 percent. Capitalism, it turned out, had plenty of room for women to get jobs outside of the home. And the American economy significantly benefitted from their decision to do so. By 2012, GDP would have been 11 percent smaller if women hadn’t dramatically increased the collective hours they spent working for pay since the 1970s.

How To Revive Progressive-Era Economics for the New Gilded Age

Radical Histories: A Fair Economy for All

But since reaching that 60 percent peak, women’s labor force participation rate has been on a slow decline, now at 57.7 percent. Could Gray’s thesis be coming true? Is there not enough room for women workers under capitalism?

Probably not, given that women’s exit from the workforce is a uniquely American problem among developed countries, as Clinton has been pointing out. It’s essentially an unforced error. In 2013, economists Francine Blau and Lawrence Kahn looked at the fact that the United States had fallen from a rank of number six among developed countries in how many women are in our labor force to number 17. And they found that policy choices are to thank for much of that failure: We would rank at number 11, not 17, if we had kept up with the developed world by mandating paid maternity leave, spending more on childcare, and making it easier for workers to seek out flexible schedules. Women’s labor force participation would be 6.8 percentage points higher.

What this research makes clear is that while capitalism needs women workers, women workers may not have the same appetite for paid work—if it so prevents them from taking care of everything else they’re responsible for. Though men are taking on more of the domestic chores of raising children, cooking meals, and cleaning counters, the vast majority of that work is still left to women. To keep the doors open for women to seek out paid employment, the system needs reforms that finally revolutionize the workplace: It can no longer be one engineered solely for male workers with wives tending to the home front.

The system also needs more guardrails to improve women’s working conditions where they already have jobs. After all, some women—women of color, immigrant women, and many poor women—have always worked and may call that work anything but liberating. These women tend to be in low-paid, under-valued jobs. In seeking their equality, we need to fight for things like mandatory paid sick leave, fair scheduling, a higher minimum wage, and stronger unionization so that women at work have greater power to push back on their employers.

Progressives have to ask themselves whether capitalism is the right vehicle for women’s emancipation in the long run.

But Gray raises a deeper question, too. “It boggles the imagination—at least my imagination,” she wrote, “how you can make a springboard for women’s liberation out of capitalism.” Let’s imagine all of our reforms are enacted. Even with guaranteed paid leave, universal and high-quality childcare, and other reforms that improve the workplace for women, even if all women who were willing and able flooded into the labor force, could we say that we had truly liberated women under the capitalist system?

Capitalism, after all, does not ascribe value for the work that gets done inside the home. In pre-capitalist societies, women were certainly subjugated and oppressed, but because all work was done to sustain the lives of the people who did it, plowing a field or baking a loaf of bread were equally essential. Under capitalism, work done outside the home can be sold for wages to capital; work done inside the home can’t create more capital for the capitalists. The average American women still spends an extra hour doing this kind of labor each day, compared to a man. As Angela Davis wrote in “Women and Capitalism,” this is “the labor of utility as opposed to that of exchange.” It is necessary, but it doesn’t generate profit, so it doesn’t get compensated. Or as Silvia Federici wrote in “Wages against Housework,” “Housework had to be transformed into a natural attribute [of women] rather than be recognised as a social contract because from the beginning of capital’s scheme for women this work was destined to be unwaged.”

Assuming it could be practically achieved, would assigning a capitalist value to this labor change anything? Would it represent liberation? It’s certainly true that something like paid maternity leave, which allows a mother to spend time with her new child, also means she’ll be more likely to go back to work and earn more afterward, which is good for capitalism. Childcare allows her to hold down a job while, if it’s of good enough quality, can pay dividends in her child’s development when he becomes a worker later in life himself.

THE NATION IS READER-FUNDED. YOUR SUPPORT IS VITAL TO OUR WORK.

But that doesn’t truly value domestic work the way we value paid work. Paid work brings with it power, prominence, prestige; we still deny that to all the people who spend time raising children and caring for their families, despite professing, every Mother’s Day, that we think being a mom is the greatest job ever. As bell hooks wrote in Feminist Theory, “Housework and other service work is particularly devalued in capitalist patriarchy.” Because housework isn’t really a job, and even if housework garnered wages it still wouldn’t be one. It can’t be crammed into the capitalist rubric.

Capitalism will also always necessitate workers at the bottom of the system. “[I]t is a system that depends on the exploitation of underclass groups for its survival,” hooks wrote elsewhere in the same chapter. And those people are often women, particularly women of color. Even with all the policies in place to facilitate women’s entrance into paid work, many will still toil in minimum wage jobs at the bottom of the food chain.

So progressives have two tasks in front of them. We live in a capitalist system, one so poorly designed that it’s pushing out the female workers it needs to continue to grow, many of them against their will. Women are not being given the same economic opportunities as men. The system is in critical need of upgrades that will allow women to fully participate in paid work without struggling under so much of the weight of household work.

But progressives also have to ask themselves whether capitalism is the vehicle for women’s emancipation in the long run. Whether it’s a system that can value the vital work of running a household, raising children, or caring for elderly parents. Whether all women will be able to participate in work that feels liberating or will be forced to work crappy jobs out of necessity. The practical demands that we reform the system we live in, but it’s ultimately not one that can bring about real liberation. So we also have to ask: If we can’t do that under this system, then which?