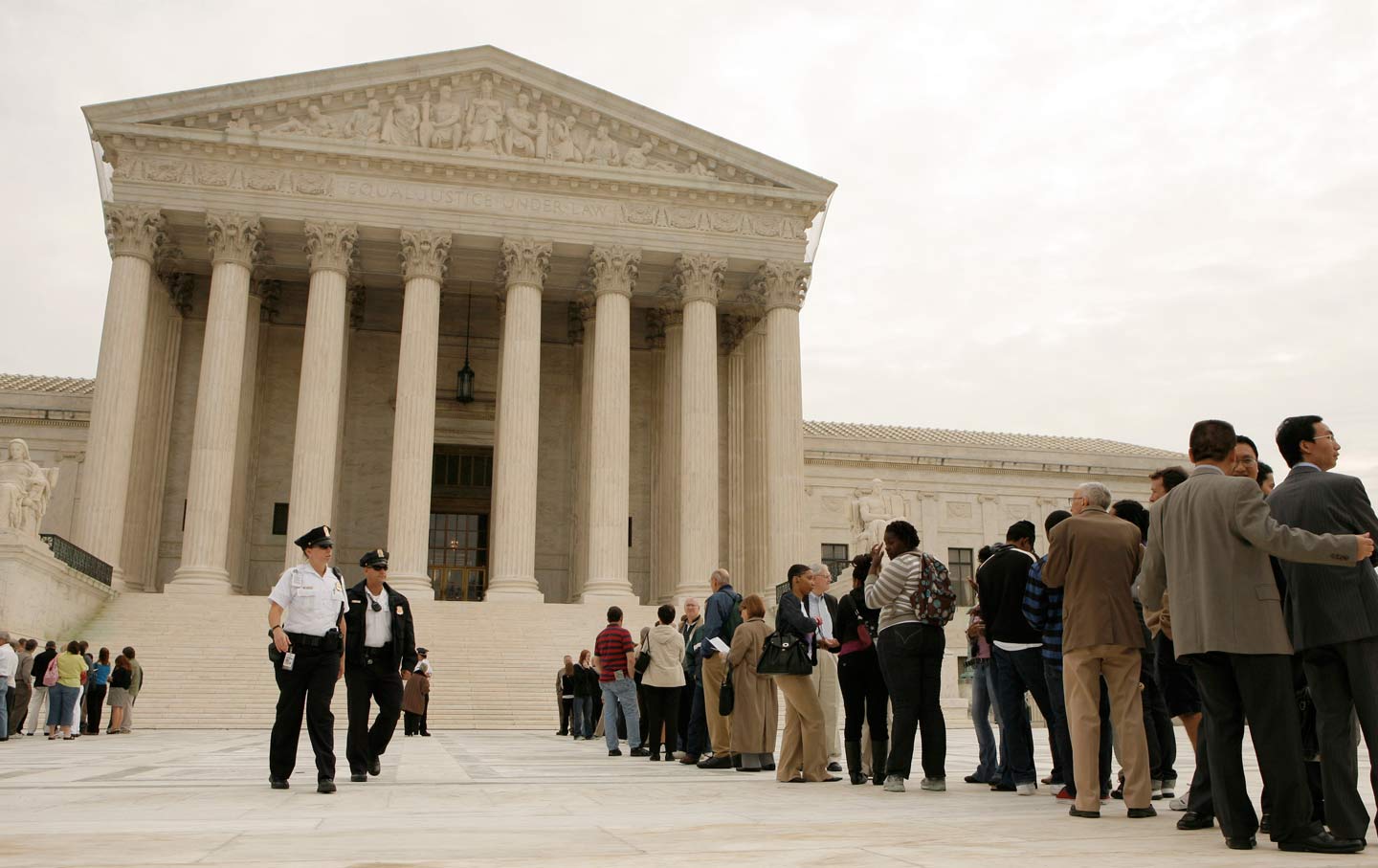 In the world of American law, the Supreme Court is the Valhalla of the professional imagination. Majestic, forbidding, grander and higher than all other forums, it’s a sacred terminus for lawyers everywhere. None but the worthy can enter the prestigious (and clubby) world of the Supreme Court bar, whose members press their claims in hopes of shaping the nation’s understanding of its Constitution. And the justices themselves preside like divinities, berobed and cloistered in their hushed chambers. Yet law professor and longtime Nation legal-affairs correspondent David Cole thinks the Supreme Court’s role as an agent of constitutional change is overstated. In Engines of Liberty ( Basic; $27.99), he trains a light on civil society instead. “Look behind any significant judicial development of constitutional law,” Cole writes, “and you will nearly always find sustained advocacy by multiple groups of citizens, usually over many years and in a wide array of venues.”

For example, by the time the Supreme Court ruled, in District of Columbia v. Heller (2008), that an individual right to bear arms exists in the Constitution, the battle over gun rights had already been won. As Cole points out, the National Rifle Association had persuaded many states to guarantee such a right in their own constitutions, and had amassed enough influence in Congress to prevent any meaningful gun-control legislation. Likewise, when the Supreme Court recognized a constitutional right to same-sex marriage in Obergefell v. Hodges (2015), it was following a strong trend in state supreme courts and legislatures. Gay-rights groups had plotted out a local strategy, beginning with historically progressive states like Hawaii and Vermont, and had also overcome several unexpected failures, most notably with California’s Proposition 8. While Heller and Obergefell were both watershed decisions, Cole writes, they should be understood as final innings and not the whole ballgame.

In addition to gun rights and gay rights, Cole profiles a third grassroots campaign: the battle to protect civil liberties during the “war on terror.” Here advocates faced a different challenge. There could be no state-by-state approach, because the federal government dictates national-security policy. And there was no need to establish a new right like a right to marry or to bear arms; freedom from torture and indefinite detention were already fundamental guarantees in American law. Hence the task for civil society was to reveal abuses of those guarantees. To do this, advocates turned to a dry and technical statute: the Freedom of Information Act. With each new batch of documents released by the government, civil-liberties groups publicized the abuses and ratcheted up domestic and international pressure on the Bush administration. To readers with any doubt about the power of transparency to affect civil liberties, Cole points to the explosive photographs of torture at Abu Ghraib.

The most fascinating material in Engines of Liberty concerns messaging in constitutional campaigns. As in politics, “the work of constitutional reform is intensely political,” Cole writes. Painful defeats and patient focus-group work persuaded the gay-rights movement to revisit its entire narrative in 2009. “People do not think of marriage as a bundle of rights,” one advocate argued. “They think of it as an expression of love and commitment.” Gay-rights groups accordingly pivoted in their messaging to focus on the family, ultimately persuading the swing justice, Anthony Kennedy. His majority opinion in Obergefell devoted several pages to the committed relationships of the same-sex couples who served as plaintiffs. Similarly, in the “war on terror,” lawyers reset the terms from “the terrorists versus the government” to “the rule of law v. the government.” This critical distinction broadened the movement’s appeal and attracted powerful new voices, such as those of retired military officers.

Engines of Liberty is a fresh and revelatory account of constitutional reform from the bottom up. The book carries a hopeful message: Despite the undue influence wielded by elite institutions, ordinary citizens can and do drive constitutional change. Even if many debates about the Bill of Rights are finally resolved in the hallowed chambers of the Supreme Court, most of the work is done elsewhere and requires not just legal ingenuity, but dedication and resolve. Hence Cole’s watchword: “patient incrementalism.” It’s a credo unlikely to resonate on the left at a moment when Bernie Sanders rejects incremental change in favor of “political revolution.” Yet Cole’s examples of constitutional reform, on both the left and the right, bear out his claims. In the law, as in politics, sometimes baby steps are the answer.