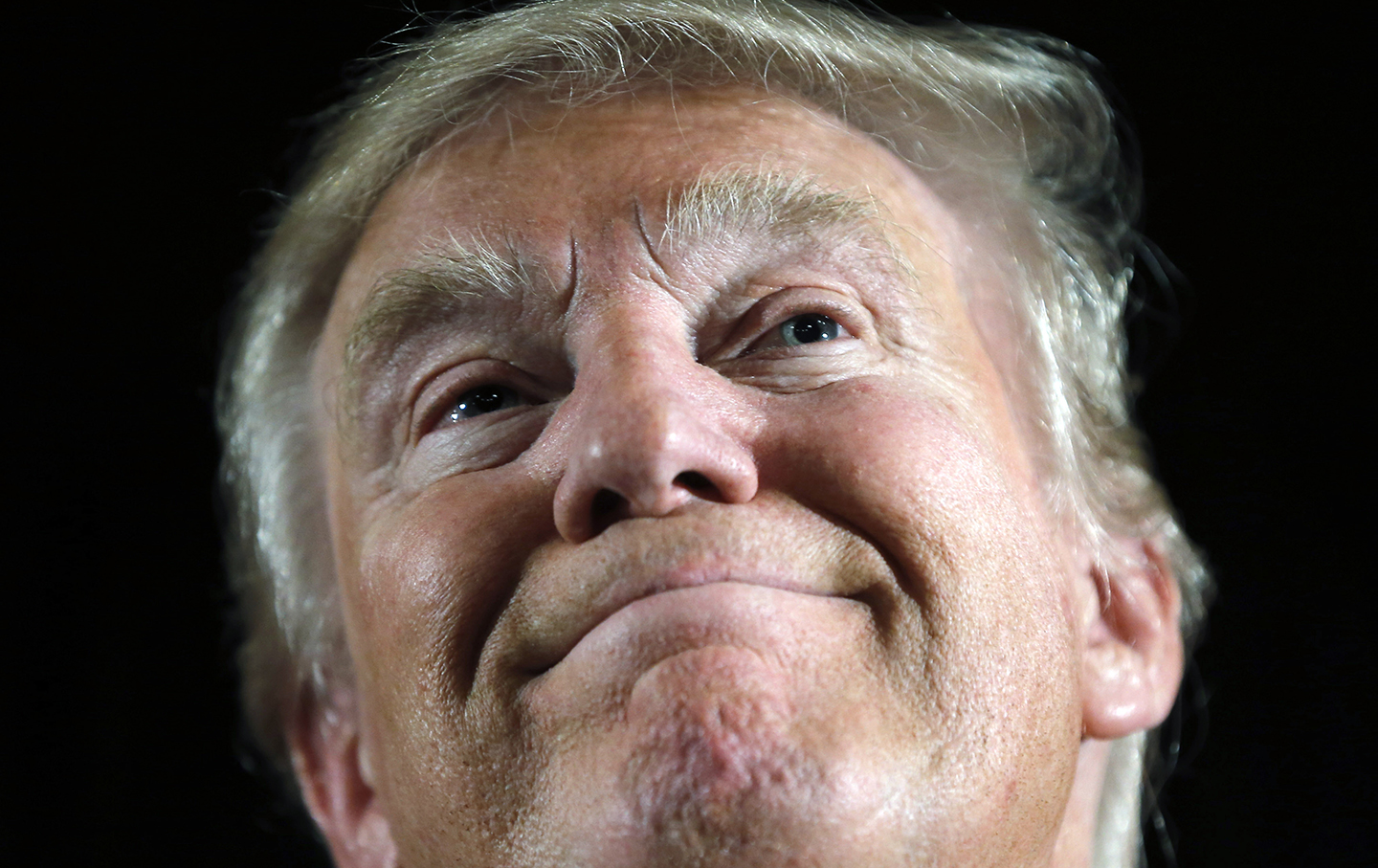 The New Yorker has rendered its solemn judgment: “After a month in office, Donald Trump has already proved himself unable to discharge his duties.” The magazine recommends his removal from office under the 25th Amendment to the Constitution, which provides the procedure for replacing an impaired president. Donald Trump is described as dangerously unfit.1

“The disability isn’t laziness or inattention,” the editorial explained. “It expresses itself in paranoid rants, non-stop feuds carried on in public, and impulsive acts that can only damage his government and himself.”2

I thought at first this was a highbrow tease—a left-wing send-up of the alarm over Trump’s bizarre behavior. His right-wing followers chanted “Lock her up!” when Hillary Clinton was their opponent. Democrats might take up the “Throw him out!” chant now that President Trump is acting like the Mad King George. Only the magazine isn’t kidding. In his address to Congress, Trump tried to sound like a sober grown-up; maybe The New Yorker’s call for his removal made him nervous.3

The American Republic has survived a lot worse than Donald Trump.

Here is my advice to New Yorker writers and readers. Take a couple of Xanax. Drink a cup of warm cocoa. The American Republic has survived a lot worse than Donald Trump. People should have a little more faith in the common sense of ordinary folks. It’s true that Trump has chosen some scary right-wing goofballs as his intimate advisers. They want him to restart the Christian Crusades against the Muslims (along with many other awful ideas).4

But Trump has also surrounded himself with battle-tested generals who have already been to war in the Middle East. They did not come home victorious. One assumes the generals understand that Trump’s most challenging foreign-policy problem is not about starting another new long war. It’s about how he might get us out of the old ones.5

Trump’s freakish behavior and obsessive lying (not to mention the foul racist slurs) have captured the public’s fascination, like watching a scary picture show. Every day the news is Trump, Trump, Trump. People argue endlessly over how it’s going to end. Some on the hysterical left insist the country is on the brink of fascism, but I know some old hands in Washington’s permanent governing class who have a calmer perspective. They assume that Trump’s people can do a lot of damage but will ultimately fail on the big stuff, because they don’t understand the intimate politics of governing, and every day they do one thing or another to undercut their own power and influence with Congress and lobbyists. Watching the Trump presidency stumble is like slowing down on the highway to get a better look at the wreck on the roadside.6

But this raises an obvious question: How did this screwball get to the White House in the first place? Put aside his odious traits and egomaniacal vanity. What explains the extraordinary success of this neophyte politician?7

Watching the Trump presidency stumble is like slowing down on the highway to get a better look at a roadside wreck.

I have a theory: Trump baffled and defeated his conventional opponents because he expressed an emotional truth about the American condition that people feel in their guts. But neither Democrats nor Republicans have the nerve to acknowledge it. The “American Century” is over, Trump declared in so many words (“We never win anymore!”). The long and mostly successful saga of US triumphalism, in which Washington essentially ran the world, is finally stumbling toward a confused and chaotic conclusion. Governing elites, though, refuse to accept that reality. It would sound cowardly, unpatriotic.8

Never mind the endless succession of losing wars, never mind the gargantuan US debt, meant to keep the world economy from sinking into the full catastrophe of global depression. We are still the “indispensable nation” celebrated by New York Times columnists and certain learned professors.9

Only, Americans at large aren’t buying it any more. Odd as it sounds, ordinary people came to a clear understanding of our national predicament long before the power elites and most of the economics profession, and especially before the data wizards of our major political parties. Trump saw an opportunity, and now his victory has generated a kind of nervous breakdown among the elites. Hard-shell conservatives are trying to talk like working-class champions. They are not so afraid of Democrats, but what if Trump puts the plug on them in the next election?10

Yes, Trump sold a magical package of solutions when he promised to restore America’s “greatness.” He even revved up a fearsome echo of 1930s/early ’40s isolationism, when Americans in general really didn’t want to get involved in Hitler’s war in Europe. But “America First” sounds reassuring to many Americans (many of whom are unaware of the historical echoes), and Trump’s criticisms of trade treaties sound right to them too.11

Ordinary people understood our national predicament long before the elites and most economists did.

The United States is still fabulously wealthy and inventive, still largely a beacon of hope and freedom for other parts of the world, but our singular preeminence and power base have been matched, even eclipsed in some respects. The governing class doesn’t want to give up dominant influence—that’s understandable—but Trump is right when he says other countries are often free riders on our willingness to pick up the tab. On the other hand, the United States spends way too much on its own military, and its arms industry is always looking for customers among our allies.12

Trump’s popular appeal is mainly driven by sentimental nostalgia for the American past—a longing for the glory years when the United States liberated the world and created a new global order, when prosperity was shared more widely and rising opportunities were more plentiful at home and abroad.13

That saga ended in America a generation ago, and it’s nowhere more evident than in the diverging path of wage and income distribution. The rich have gotten richer and working people are struggling to maintain their status and losing. Many are now competing with $2 a day child labor in Asian sweatshops. Families tried to keep up for a time by working two jobs while borrowing more and more, to no avail. Senator Elizabeth Warren made her name by attacking the vicious bankruptcy laws that tightened the squeeze on working people (lots of banker-friendly Democrats voted for those laws).14

My point is this: Trump (along with Bernie Sanders) deserves credit for forcing this new working-class consciousness into the brain-dead political debate of Washington. If Sanders had won, we could reasonably hope for the dawn of a new reform era. But don’t count on Donald Trump. We already know he is unreliable with facts. More to the point, he looks back nostalgically at lost glory and imagines that certain familiar economic measures—mainly, pro-business tax cuts—will restore the good times. As technologist Joe Costello says, Trump’s program is “reactionary nostalgia.”15

In fact, Trump’s proposals (with the possible exception of trade reform) are sure to increase economic inequality. His ideas are patterned after Ronald Reagan’s regressive tax reductions—a massive looting of the Treasury in behalf big business and big wealth holders. Despite warnings from budget analysts, the Gipper’s early 1980s giveaway launched the modern era of swollen federal deficits. Only now, instead of billions, US indebtedness is counted in trillions.16

Most Democrats are looking backward too. Like Trump, their new ideas are mostly retreads. If rank-and-file Dems want to get real influence, they should copy a successful Republican device. Ask every Democrat running for office—from the US House and Senate to state legislatures and governorships—to take the following pledge: They must promise that they will not vote for any tax measure that favors the billionaires and big corporations, thereby increasing the income inequality that is already a national scandal. If the Democratic candidates refuse to sign the pledge, put them on the hit list.17