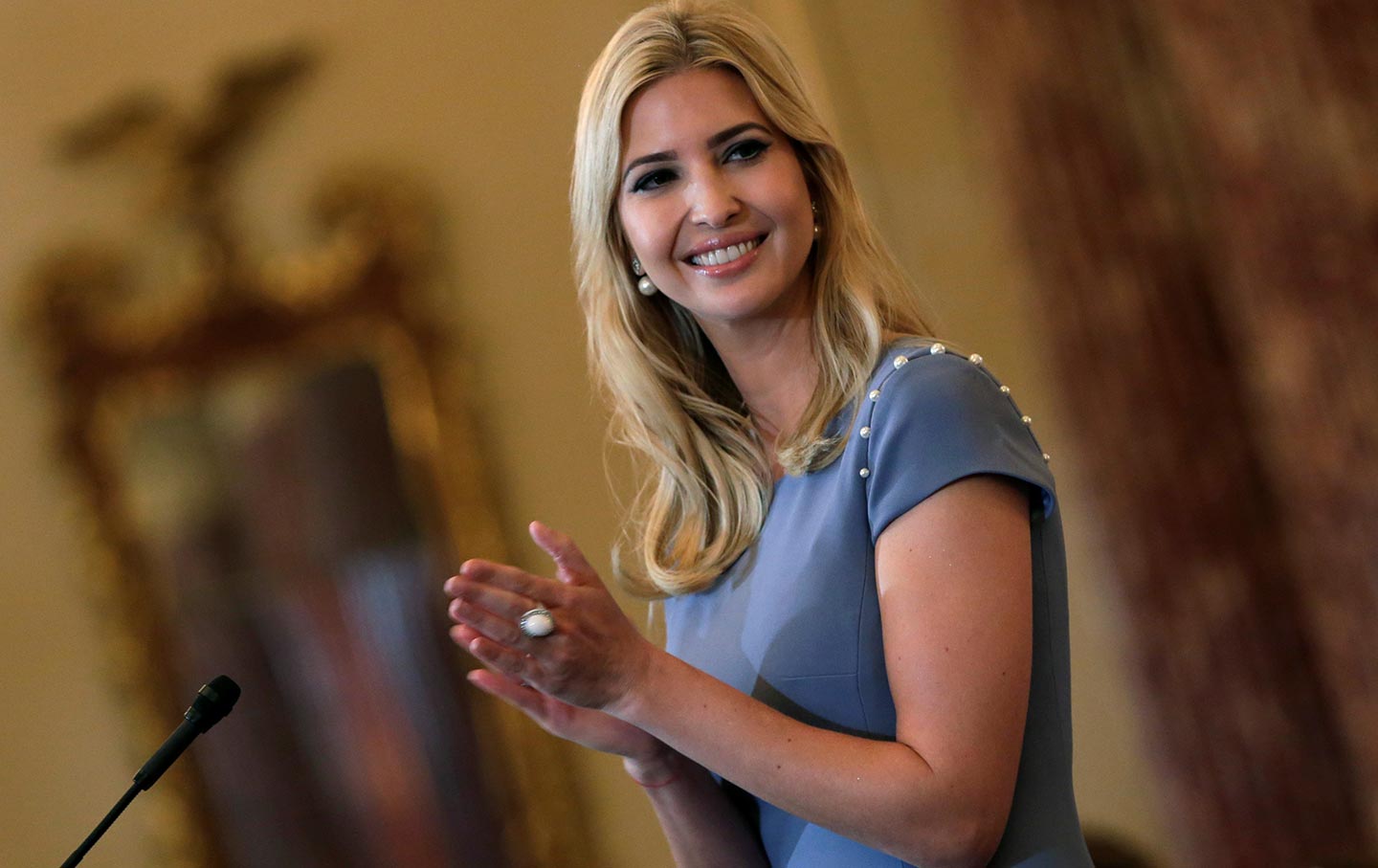 Ivanka Trump has apparently dazzled the women of the People’s Republic with her first-daughter charm offensive: Chinese women admire her as the quintessential American power mom, even as Trump Senior trades twitter barbs with President “Daddy Xi” in Beijing. But while Ivanka markets her new guide to success for “Women Who Work,” the women working for her in China, producing slippers for her elite apparel brand, face a work-life balance that smacks more of Oliver Twist than Lean In.

Earlier this year, the US-based China Labor Watch (CLW) rubbed some of the gloss off the heavily marketed, obsessively scrutinized Ivanka brand when a team of undercover investigators infiltrated the facilities of a supplier to Ivanka’s shoe brand, Huajian, in Guangdong and Jiangxi Provinces. They uncovered shocking brutality, including evidence of wage theft and forced labor, with nonstop production shifts that lasted well over the legal standard.

Some employees were reportedly “tricked into the factory with inaccurate recruiting advertisements.” Intense production quotas required an amount of labor that was said to be physically impossible to meet even with overtime; work hours ran up to 15 hours per day, and managers often shorted workers on pay for forced overtime hours. Under the May production schedule—which CLW says included orders from Trump’s company—workers reportedly “worked for over 350 hours” with only two holidays off.

If fatigued workers tried to request extra rest time, CLW claims, “the management would decline their request and use large order volumes as an excuse.” Those too exhausted to continue often ended up getting fired just for incurring three unexcused absences, which the management evidently considered “voluntarily terminat[ing] their employment, in which case no pay or compensation would be given.” The payment schedule was also stalled for weeks, so a worker who quit might have to forgo their last month’s wages.

Investigators observed that women workers faced more aggressive wage theft and penalties than male colleagues. Additionally, student apprentices were misclassified as regular workers and pressed into excessive, underpaid shift work. Even by China’s standards, the labor conditions were wildly out of step with the luxurious image of the brands known to contract with Huajian, including Guess and Marc Fisher—high-end labels that claim to follow high corporate-ethics standards—and the signature label of a presidential daughter and global feminist figurehead.

Investigators reported that “Management frequently verbally abused” workers with degrading epithets, and misogynistic insults against women workers, “and sometimes physically hit workers.”  The Independent quoted one worker’s recollection of seeing a manager bludgeon a coworker with a high-heeled shoe, leaving him streaming blood as he retreated to the on-site nurse in plain view of coworkers.

CLW’s investigation did not specifically target Trump’s brand; rather, the organization hopes its findings draw the public’s attention toward the systemic issues of structural abuse and exploitation across China’s apparel industry, and the complicity of Western fashion brands.

The dehumanizing treatment and lack of accountability—which researchers observed and documented with interviews and photography—led CLW to deem Huajian one of the worst workplaces they had ever encountered. None of the 20 brands known to have sourced their production at Huajian have directly responded to CLW’s queries, the group says, though some companies have issued tepid statements to the press, promising to investigate the claims.

Anecdotally, CLW says it has heard the factory eased up its work schedules since the scandal broke, and one aggrieved former worker said he was awarded some backpay. But outside inspectors and media apparently remain blocked from further investigating the factory. It is unclear whether the Trump brand’s previous pending orders have been canceled.

“Because Ivanka Trump is the most high-profile brand in the investigation…she is setting a bad example,” says CLW Executive Director Li Qiang, noting that Huajian was “the worst among all the factories that we’ve investigated in the past few years.”

The investigation reached international headlines after three CLW investigators were arrested and detained by local authorities in May, and held in isolation for weeks as family members endured harassment and intimidation. The wife of investigator Hua Haifeng, Deng Guilian, wrote in June to Ivanka Trump pleading for her to intervene.

After Hua’s disappearance, several agents entered her house without a warrant, Deng recalled, confiscated her phone and subjected her to hours of intimidating interrogation, refusing to release her until she signed off on a police report. One officer “lectured me on my thinking, asking me not to get in touch with strangers…not to accept anyone’s help…. I was to report to them if any stranger got in touch with me.”

CLW says Deng’s letter never received any response, though the investigators were eventually released on bail in late June (now awaiting trial, they have been ordered not to speak with media, according to CLW). Nor has anyone in the US government publicly commented on Huajian, though some anonymous US officials suggested recently to Reuters that the labor controversy was being used as a geopolitical ploy between Washington and Beijing.

But CLW says it has no other motives than simply improving the workers’ conditions. Li also wants to know why Deng’s outrage went unanswered by an ostensible “feminist” of such influence.

So Huajian remains one of many hidden undersides of the Trump family empire. Though the allegations of labor abuse are endemic and not unique to Trump’s brand, the President’s name is indelibly linked to allegations of massive labor abuse, along with the violent suppression of advocates who are giving Western brands the wrong kind of publicity. CLW believes Ivanka’s corporation has a responsibility to use her public platform to make an example of cleaning up her company’s supply chain.

In light of Trump’s eagerness to rival China’s economic dominance, Qiang suggested another approach to free trade for the president: “Speaking of bringing jobs back to America as Trump says, he might as well bring back these slave labor jobs that are in Ivanka Trump’s factories, if he wants.”