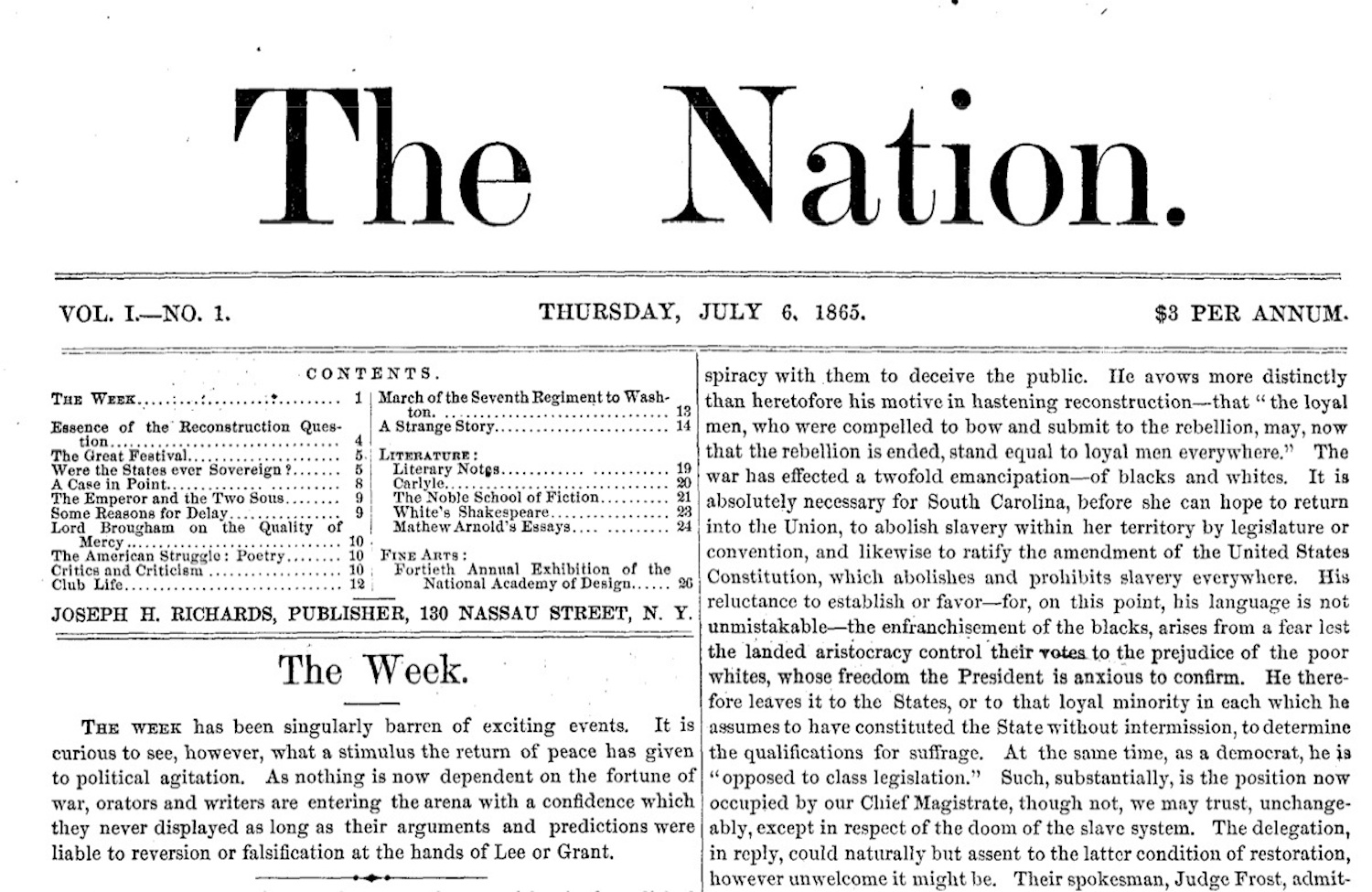 The first page of the first issue of The Nation.

Beginning on January 1, The Nation will be launching The Almanac, a 365-day compendium of how America’s oldest weekly magazine has covered important people and events of the last 150 years. For every single day of the year, The Almanac will take a significant event, or the birth or death of a well-known public figure, and excerpt an article The Nation published on the occasion, or by or about that person. As part of the NationNow app, as a feature at TheNation.com and in a daily or weekly e-mail, The Almanac will bring the last 150 years of history to life as never before.

March 7, 1965—“Bloody Sunday” in Selma, Alabama: “The bleeding, broken and unconscious passed across the screen, some of them limping alone, others supported on either side, still others carried in arms or on stretchers. It was at this point that my wife, sobbing, turned and walked away, saying, ‘I can’t look any more.’ ”

July 27, 1866—The first transatlantic telegraph cable is completed: “Where it is all going to end, and what kind of life the ‘merchant of the future’ will lead, nobody knows, or pretends to know.”

November 11, 1918—World War I ends: “Everybody must rejoice without stint that the last of the German Kaisers has gone…. Under our very eyes is dying the greatest of modern empires, in some respects the greatest nation of our times. May it be the last of the empires! And out of its bitter anguish and travail may there arise in the future, without foreign interference, a new, an honest, and a glorious democratic State to help point the way toward the goal of all mankind, liberty, fraternity, equality!”

Taken together, such excerpts comprise an incredible history of the United States and of the world as seen in the pages of a magazine that has been providing indispensable reporting and commentary on politics and culture every single week since just after the Civil War. Our writing on both Andrew Johnson’s and Bill Clinton’s impeachment trials are in The Almanac, as are obituaries for Theodore Roosevelt, Vladimir Lenin and Winston Churchill—all of that before the end of January. That month alone also includes our reviews of Dr. Strangelove and James Joyce’s Ulysses, our responses to the beginnings of both the Prague Spring and the Arab Spring, as well as articles about the first meeting of the United Nations General Assembly, Eisenhower’s warning about “the military-industrial complex,” Roe v. Wade and the announcement of a peace agreement to end the Vietnam War. Those last two, as it happens, occurred on consecutive days in 1973—just one of the many felicities, coincidences and ironies in The Almanac, an endlessly fascinating reminder of the truth of William Faulkner’s observation: “The past is never dead. It’s not even past.”

Get The Almanac every day (or every week) by signing up to the email newsletter.