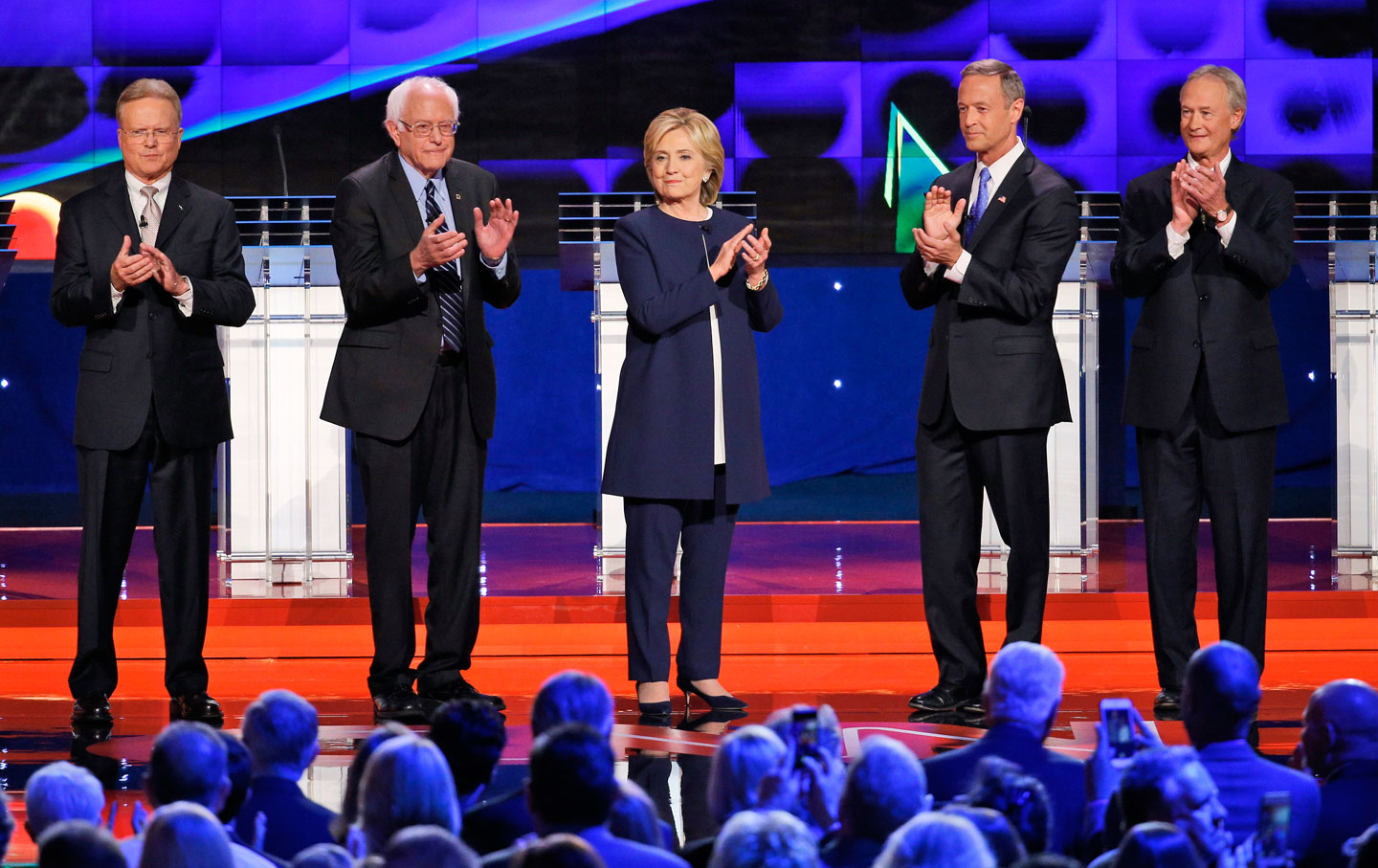 Las Vegasâ€”â€śEnough with the damn e-mails!â€ť There were plenty of debatable moments in the Democratic Debate: Did Bernie Sanders succeed in making democratic socialism safe for work? Has the passage of eight more years made Hillary Clintonâ€™s vote to go to war in Iraq less unforgivable? Is Martin Oâ€™Malley doing more damage to Clinton or Sanders? Will Jim Webb show up? Does Lincoln Chafee exist?

But there really canâ€™t be any doubt that the soundbite of the evening, and the money shot for the television audience, came when, after listening to Clinton run through her dismissal of the e-mail controversy, Sanders responded, â€śThe American people are sick and tired of hearing about your damn e-mails.â€ť It was the one moment all night when the whole hall erupted in applause, with the CNN cameras cutting to a shot of Jesse Jackson standing and clapping.

What was interesting about that moment was that, although they were all clapping together, the Sanders and Clinton supporters were clapping for different reasons. The Clinton people perceived, rightly, that by the terms of the typical gotcha score-keeping that we have gotten accustomed to, Sanders had just handed his opponent a great gift. What the Sanders people saw was their candidate showing, in the starkest possible terms, his disdain for that kind of politics.

Before the debate there had been a lot of speculation about whether any of the other three candidates would seize a chance to break through tonight. Martin Oâ€™Malley tried his best, hitting Clinton hard on her Iraq war voteâ€”which she rebutted easily by pointing out that her vote hadnâ€™t kept him from endorsing her in 2008. And Oâ€™Malleyâ€™s folksy manner, his stress on the need for new leadership, and the sharp left turn heâ€™s taken since his days as a stalwart of the Democratic Leadership Council might give him enough of a poll bump to make him the Democratsâ€™ own Marco Rubio. Meanwhile, Jim Webb, a serious man with complex ideas, nearly reduced his own candidacy to the slogan â€śHe Shoots to Kill.â€ť And Lincoln Chafee showed why no one should ever inherit a parentâ€™s seat in the Senate.

In terms of the main event, though, we learned that Hillary really does know how to play this game. Not just for the way she excoriated Bernie for his record on gun control, or for the way she used a question about parental leave to pivot left, declaring, â€śI know we can afford it. Because weâ€™re going to make the wealthy pay.â€ť But because she seems to have figured out how to look presidential without seeming entitledâ€”at least on television.

Sanders, too, did well enough to satisfy his supporters. He stuck to his guns, and his issues, and showed a typicalâ€”but refreshingâ€”flash of unscripted candor when he was asked whether he would end the NSAâ€™s surveillance program and he replied, â€śOf course.â€ť But over the course of the night his answers also revealed the fundamental difference between his approach and Clintonâ€™s. Although she described herself as â€śa progressive,â€ť Clinton typifies all that is goodâ€”and badâ€”about Democratic liberalism. She wants to tinker, and tweak, and make the system fairer. Sanders wants to tear it down, and to do that he really will need a movement, not just a mobilization. Because for Sanders, unlike Clinton, being electable isnâ€™t nearly going to be enough.