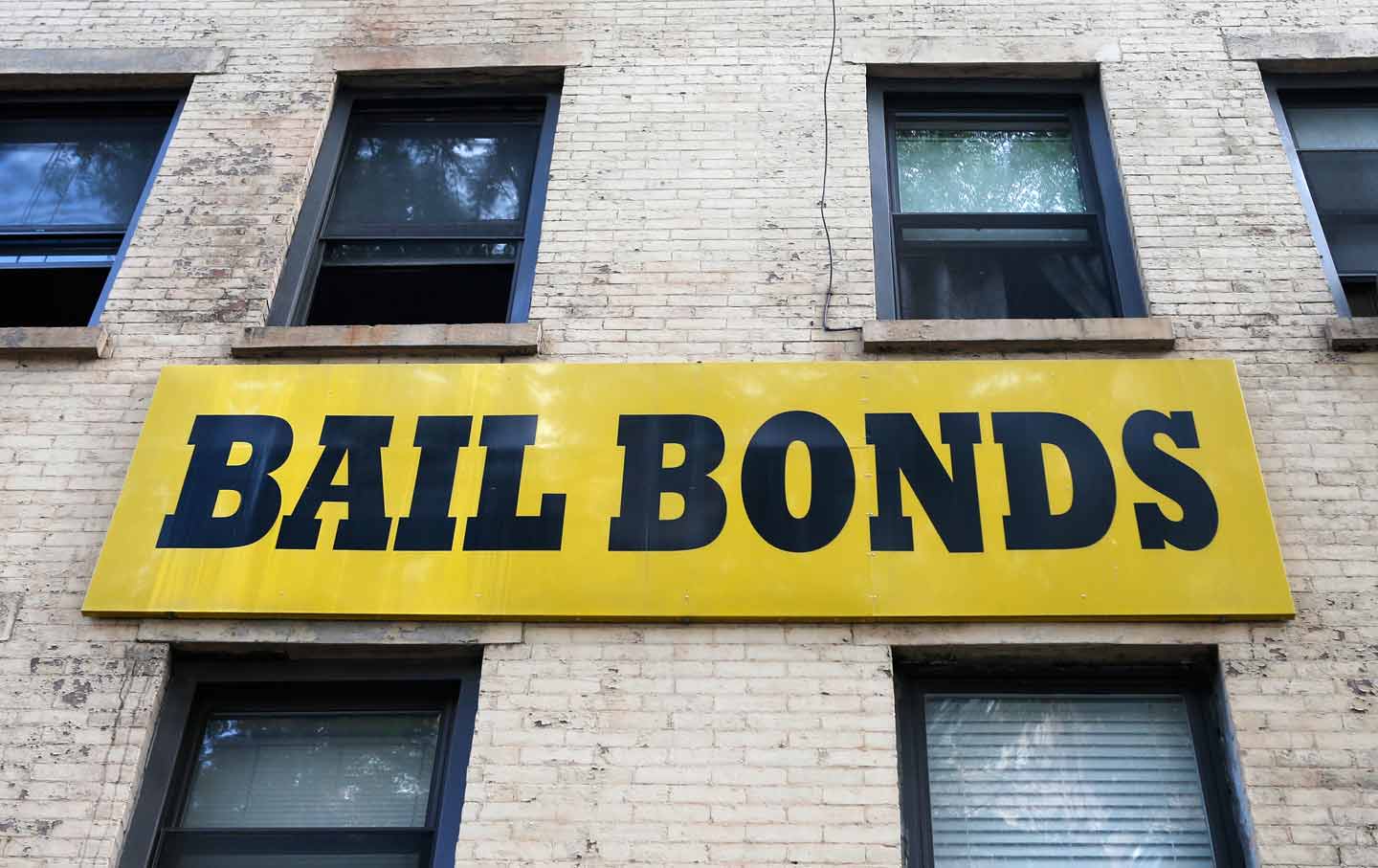 A sign hangs on the side of a bail bonds business near Brooklyn’s courthouse complex and jail in New York. (AP Photo / Kathy Willens)

In what University of Washington sociologist Alexes Harris calls our “punishment culture,” accountability for the convicted is carried out through modern-day debtor’s prisons. So-called “legal financial obligations”—fines and fees to fund jails and courtrooms—have become an invisible ball-and-chain for citizens condemned to eternal financial purgatory.

A brush with the police for pot possession might quickly spiral into a stiff penalty for a missed court date, deepening legal debt, missed work, re-arrest, a longer rap sheet. In daily life, the accompanying stigma layered over indebtedness “perpetuates inequality among African American and Latino men and among high school dropouts in the employment market.” The long-term opportunity cost could include mental-health crisis, forgone voting rights, and chronic recidivism, because people with nothing left to give also have nothing left to lose.

The question of poor individuals’ “debt to society” in the criminal justice infrastructure has exploded amid high-profile police-violence scandals, particularly in Ferguson, Missouri, where the bullet that killed Michael Brown sparked riots and exposed patterns of criminalization that afflict mutually reinforcing social and economic damage. A recent Department of Justice investigation uncovered a system in which officials see black citizens “less as constituents to be protected than as potential offenders and sources of revenue.”

Harris’s long-term study, A Pound of Flesh, has tracked formerly incarcerated individuals in Washington to show that a generation of massive public investment in criminal justice (and simultaneous disinvestment in social programs) has spawned a secondary industry feeding off people’s inability to afford public costs levied on their basic rights. The penalties that pile on “practically represent a sentence for cost recoupment, but symbolically they also represent a sentence of accountability,” resulting not only in financial loss but “reproduction of social inequality.”

“[It] seems like, I’m gonna die with this debt hanging over my head…. It’s taken a piece of me spiritually.”

While society zealously holds the poor to account, Harris explains, the penalties are administered by “street-level bureaucrats with little governmental accountability and oversight,” who can impose arbitrary, racially discriminatory punishments. The accumulation of “frequent contact with the criminal justice system, their debt, and the associated court summonses, warrants, and stints of incarceration…create an ongoing nightmare.” Access to justice is foreclosed as well, due to prohibitive bail costs and lack of legal representation.

Even due process carries a price tag in states like Washington, where fees for jury trials have risen lately. A 2005 bill set a cost of “$150 and $250 for a six-or twelve-person jury, respectively.” Yes, the right to a jury of your peers costs $25 a head—add another $100 or so for a defense attorney.

Punishing the supposed deviance of the poor with still more poverty reflects “rhetoric in contemporary American society about personal responsibility and accountability,” Harris explains via e-mail:

What is interesting about monetary sanctions and the criminal justice system, similar to that of education and even health care, is that we have shifted what should be a guaranteed right or governmental responsibility to the people who are processed through the system.

Harris’s subjects started with an average debt of about $9,200 each, generally as the combined cost of several convictions. After five years, even with regular monthly payments of about $31, the debtor “would owe $10,667 as a result of the accumulated interest and surcharges—an increase of $1,463 over the initial debt.”

Legal debtors struggle to live with dignity. Nick, a 38-year-old black man who was attending community college through the help of a reentry program, was trailed by a chain of debt leftover from three convictions in the mid-1990s—violations related to “drug addiction and mental health problems” in adolescence that poverty only exacerbated later on. When Harris interviewed him, he had been sentenced to 56 months in state prison, been jailed several times, and “accumulated a total of $3,178.06 in legal debt,” an impossible sum for him pay down.

Though his sponsoring organization helped him with repayments, tragically, while trying to get his life back on track, Harris found, Nick ultimately “cycled between attending school, relapsing into drugs, experiencing bipolar depression, and being arrested and reincarcerated.”

The surrounding community bears further hidden costs. As a study by the Ella Baker Center revealed, the collateral damage of incarceration for families includes costs associated with visiting loved ones and exorbitant phone surcharges, and handsome profits to contractors providing services like prison health care and office operations.

Often, Harris notes, the irony of the system is that the “cost recovery” involved in the carceral cycle yields little actual monetary value for crime victims or anyone else. The amount recouped in many cases is largely notional because they’re simply too poor; the whole system is inflated by a sense of vindictive coercion rather than financial prudence. Besides, how much economic bloodletting is enough to really “repay” alleged suffering? Does the victim of a burglary, say, gain anything, morally or monetarily, from the systematic externalization of criminal-justice costs onto the offender that results in robbing a child of a parent or college education?

One interviewee, Kathie, explained the emotional trauma of “court-imposed debt for life”: “It’s like an insurmountable barrier, that seems like, I’m gonna die with this debt hanging over my head…. It’s taken a piece of me spiritually, you know. It’s taken a part of my soul.”

Following the public outrage sparked by the Ferguson crisis, if communities can grasp how social and financial predation interweave in the criminal-justice bureaucracy, those who always felt intuitively that the system was stacked against them can perhaps really put a number on it—and then seek real economic recompense.

Capitalism inherently monetizes our bodies and behavior, whether at work, or behind bars. In an unforgivingly punitive system, consumer debts are reduced to a matter of “personal responsibility”; a child’s failure at school can’t be due to poverty but simply moral failure or “lack of grit.” The wholesale deflection of social responsibility breeds a social consensus that sentences the citizen to a mentality of denying self-worth. The “culture of punishment” then stretches deep into our psyches; we internalize our criminalization perhaps even before getting locked up. From above, a paternalistic bureaucracy compels us to blame ourselves first, and never the system quietly robbing us of our own souls.