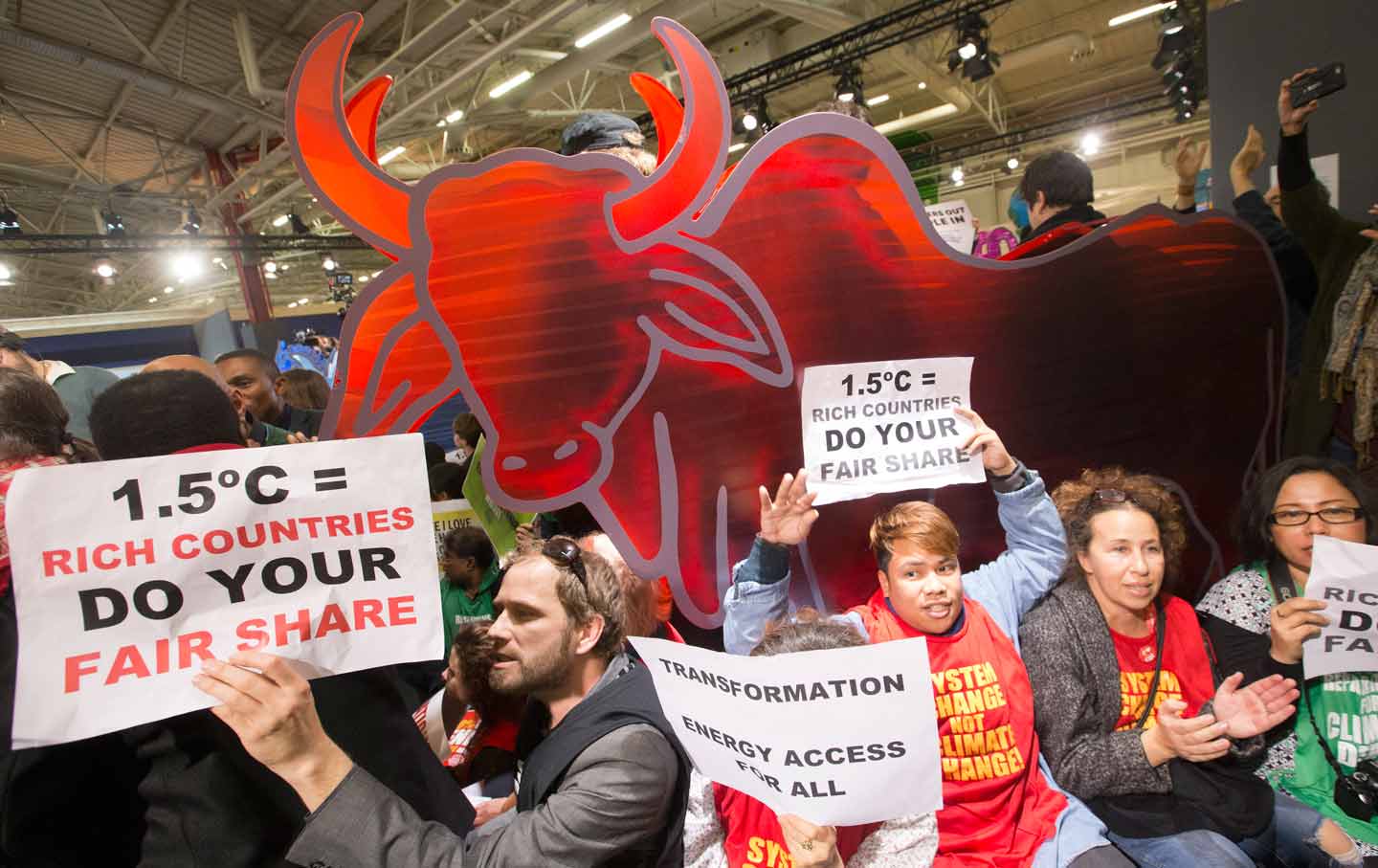 EDITOR’S NOTE: The original article used the expression “loss and damage,” which has been replaced in this updated version with “liability and compensation” to more accurately reflect the negotiations. Furthermore, the article has been updated with new information about financial assistance to developing nations.

Paris, France—Entering the closing 48 hours of the global climate negotiations, US Secretary of State John Kerry said on Wednesday that “we will not leave the most vulnerable nations among us to quite literally weather the storm alone.” Speaking an hour before newly updated negotiating text was released, Kerry also referenced the surprising news from Monday that a temperature limit of 1.5 degrees Celsius—“or as low as we can go” beneath 2 degrees, he said—might be included in the final agreement. But representatives of developing nations complained that, behind closed doors, the United States was demanding two deal-breaking quid pro quos. First, in return for referencing the 1.5 C target, poor and vulnerable nations must agree to never again raise the issue of “liability and compensation” for the climate impacts bound to increasingly afflict those nations in the years ahead. Second, the US has refused to provide the financial assistance poor nations need to pursue a development path consistent with a 1.5 C target—for India, for example, to forego coal-fired power plants in favor of wind and solar.

In an uncharacteristically animated speech, Kerry made news by announcing that the United States will double its funding for vulnerable countries’ adaptation to climate impacts to $800 million a year by 2020. Beyond that, he largely reiterated the known US position, listing four points the Obama administration wants to see in the final text: The agreement should be “as ambitious as possible”; it should be “flexible,” reflecting the differing economic circumstances of each country; it should include “adaptation and resilience” for the poor and most vulnerable countries, where climate disruption is “a matter of life and death,” and it should “get stronger over time.”

In a speech streamed live throughout the Le Bourget convention center, Kerry told a packed press conference that he was optimistic that the Paris summit will succeed, saying, “We are seeing momentum towards an agreement that has never existed before.” He concluded with unabashed cheerleading, urging his fellow diplomats to “do whatever it takes, make the compromises we need to make, to give the world the agreement it deserves and demands.”

What Secretary Kerry did not say was also important. He did not endorse de-carbonizing the global economy by 2050 or the related imperative of leaving most of the earth’s fossil fuels in the ground, as scientists have said is required to honor the current international goal of limiting temperature rise to 2 degrees C above the pre-industrial level. Nor did he mention “liability and compensation”—a shorthand term for the demand by vulnerable countries for monetary and other assistance to deal with irreparable climate impacts beyond what adaptation can address, such as the disappearance of homelands under rising seas.

Civil society groups expressed varying degrees of enthusiasm for Kerry’s remarks, even as other activists announced plans for a “Red Lines” demonstration in the streets of Paris on Saturday, despite French authorities’ continuing ban on large public protests.

“Secretary Kerry’s commitment to an ambitious deal is clear,” Michael Brune, executive director of the Sierra Club, told The Nation. “This announcement of additional financing—the hardest thing for the US to pledge—shows how committed the US is to a strong outcome. But there is still much more to do.”

“With today’s announcements, Secretary Kerry has just taken the US off the fence on finance and helped boost the elements we need to achieve the 100% clean energy deal the world demands,” said Emma Ruby-Sachs, acting executive director of Avaaz, a citizens movement that claims 42 million members worldwide. “The question now is whether China and India will back the deal, or break it.”

Kyl Ashe, senior legislative representative for Greenpeace USA, praised Kerry’s sense of “urgency” but complained that “the force of his words is not matched by the US financial commitments. The US $800 million he announced, doubling the current commitment, is a positive step, but it’s just a drop in the ocean compared to what is needed.”

Under the banner “It’s Up To Us To Keep It In The Ground,” activists including Bill McKibben, Naomi Klein, Vandanna Shiva, and Rebecca Solnit revealed that thousands of climate-justice activists will lay red tulips (sustainably harvested in Belgium) along an undisclosed boulevard in Paris on Saturday to “honor the past and future victims of climate change” and to demonstrate the climate justice movement’s “commitment to keep fighting to keep fossil fuels in the ground and make a just transition to 100% renewable energy.”

Meanwhile, the surprising news about a possible 1.5 C target in the final agreement continued to cascade through the summit, triggering diverse reactions from governments, activists, and scientists. None of the big powers said to be open to such a move—the United States, the European Union, Canada, China—have disputed the media accounts, indicating the idea is still alive in the back rooms where diplomatic negotiations are now intensifying.

Speaking not for attribution, some US activists suspected a trick. Making a voluntary pledge of 1.5 C is easy, they argued, and not to be taken seriously, given that the current commitments for emissions cuts would produce at least 3 degrees C of warming by 2100. Only a clear, binding commitment to leave fossil fuels behind entirely by 2050, and an ambition mechanism to scale up current commitments accordingly, can deliver the progress science demands.

The view from the global South, on the other hand, focused more on the alleged quid pro quo regarding “liability and compensation.” “The US does not want us to talk about ‘liability and compensation,’ and we have not,’” said Saleem ul Huq, director of the International Center for Climate Change and Development in Bangladesh. “But they say, ‘Ah, but you’re thinking about it. Stop thinking about it!’ To ask the most vulnerable nations never to raise this issue in the future is unacceptable to us. Climate change has been caused by the emissions of the wealthy world, but it is the poor who are suffering the worst, and this is morally wrong.”

And while developing countries have the greatest self-interest in a 1.5 C climate scenario, advocates say that they cannot prioritize zero-carbon over climate-destructive development options without financial help—which the wealthy countries are not as yet offering at the necessary scale. Secretary Kerry, in his speech, lauded the US’s participation in a coalition of countries pushing for the most ambitious emissions reductions possible. But the coalition’s stated plans make no provisions for financially assisting developing countries to choose wind, solar and other clean options over dirty oil, coal and gas. (The $800 million in aid Kerry announced is meant for adaptation to climate impacts, not reduction of greenhouse gas emissions.) Solar is cheaper than coal over the long term—its fuel is free—but it can carry high initial capital requirements to construct solar power facilities. Without aid, a country like India, with its abundant domestic coal supplies, has an economic incentive to choose coal over solar, despite the terrible health costs coal imposes both immediately, through increased asthma and lung cancer, and over time through worsened climate disruption. In essence, India ends up subsidizing its economic development with increased sickness and death among its people. “Many leaders say they support a 1.5 degree temperature limit, and we’re heartened to hear that, but that doesn’t change anything if you don’t have a map and a car to get to that destination,” said Ruth Davis, political director at Greenpeace UK. “The ministers are holding the pen. Those of us who have watched for a long time see a new spirit of cooperation, but this cooperation has to result in something real and meaningful.”

Finally, some ask whether it is even possible to limit temperature rise to 1.5 degrees C. The world has already warmed by 1 degree C, and the fact that carbon dioxide remains in the atmosphere for centuries insures that temperatures will rise further, no matter how much emissions are reduced post-Paris.

Although it won’t be easy, a 2 degrees C limit can be honored, Dirk Messner, a senior scientist at the German Advisory Council on Global Change, reported during a “side event” at Le Bourget on Tuesday. What’s needed are dramatically different political, economic, and even cultural choices, Messner said, adding that he is relatively optimistic, given the distance the world has traveled since the failed summit in Copenhagen six years ago. “In 2009, our activities towards a zero-carbon economy were occurring at the periphery of our social systems,” he noted. “In 2015, they are taking place in the center of our systems. For example, this year investments in renewable energy sources such as solar and wind are resulting in higher energy production than new fossil energy investments are. This is a tipping point. The question is, How do we scale up the pace of change?”

A little-noticed paper published in Nature Climate Change in May by colleagues of Messner at the Potsdam Institute for Climate Impacts Research made the case that even the 1.5 C limit could be achieved. This would require, however, accepting that temperatures would first rise closer to 2 degrees C before being reduced by the application of carbon-negative practices: using photosynthesis to extract CO2 from the atmosphere by growing trees and planting cover crops that get buried underground. Messner, however, was pessimistic such measures can achieve 1.5 C, calling the scenario “technologically possible, but politically, economically and socially implausible,” because it would mean diverting so much land area that food production and biodiversity would suffer.

But one of the co-authors of the Nature Climate Change study said that this pessimistic view did not necessarily have to hold true. Joeri Rogelj, a scientist with the International Institute for Applied Systems Analysis in Austria, agreed that carbon-negative practices could have unwanted problems. But Rogelj told The Nation that the latest report of the Intergovernmental Panel on Climate Change “identified policy choices by which possible such adverse side effects can be minimized.”

So will the Paris summit end with an agreement that leaves no one behind, as John Kerry urged on Wednesday afternoon? The next 48 hours will be decisive.