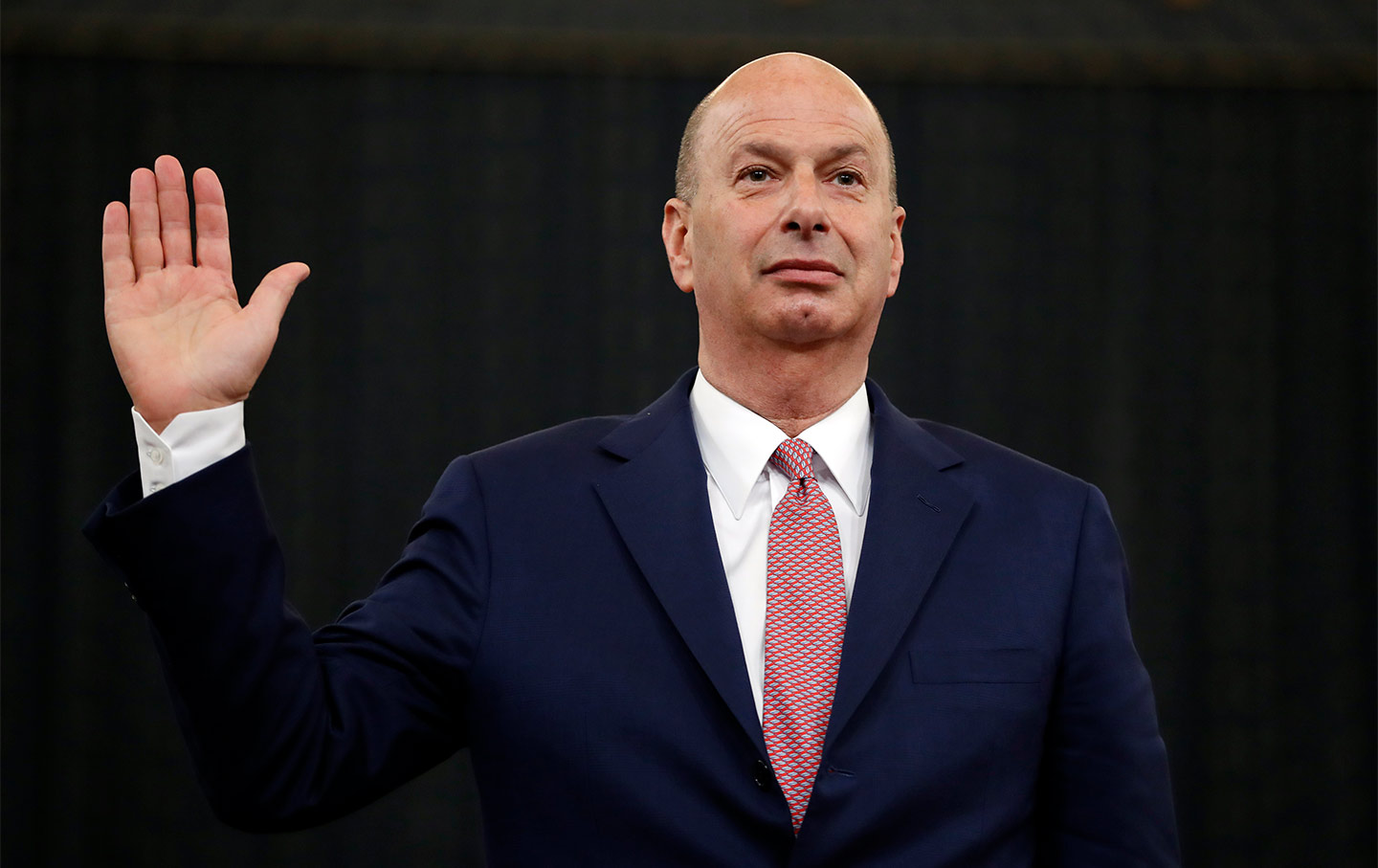 US Ambassador to the European Union Gordon Sondland is sworn in to testify before the House Intelligence Committee on November 20 during the impeachment inquiry of President Donald Trump. (AP / Andrew Harnik)

Two weeks of public hearings in the Democrats’ impeachment inquiry against President Donald Trump closed with widespread talk of a new “bombshell” that had sealed the case, and with it the fate of Trump’s presidency. But rather than producing a Watergate-like moment, the Ukrainegate testimony was far more akin to its predecessor, Russiagate, and accordingly, far more likely to produce the same disappointing result.

The basis for the excitement was the testimony of Gordon Sondland, the US ambassador to the European Union. Sondland is one of the few witnesses to have actually spoken to Trump, and the only known US official said to have relayed to Ukrainian counterparts that money to purchase US weapons—known as “military aid” or “security sector assistance”—was conditioned on Kiev’s commitment to open investigations. 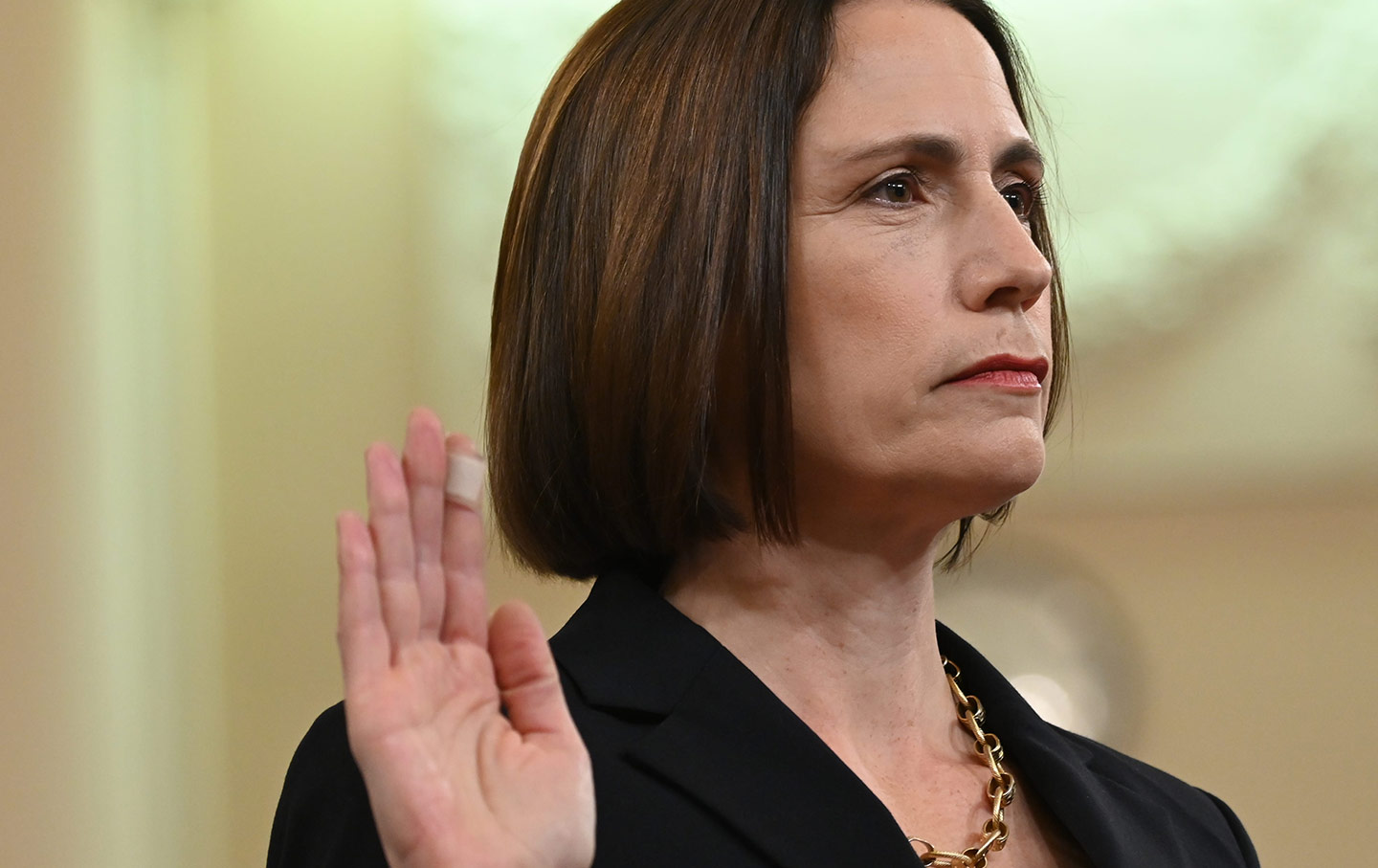 The consensus interpretation of Sondland’s testimony is that he confirmed that such a scheme transpired. Indeed, in his opening statement, Sondland asserted that there was a “quid pro quo” and that “everyone was in the loop.” Widely overlooked is that Sondland was not referring to the military funding. Instead, Sondland said that Rudy Giuliani told US officials and Ukrainians that a Ukrainian commitment to open investigations were “prerequisites” for a White House meeting and phone call sought by Ukrainian President Volodymyr Zelensky. But leveraging a White House meeting or phone call is not the “quid” at the heart of the impeachment inquiry: leveraging military funding is. And on that front, Sondland’s testimony did not advance the Democrats’ case.

When questioning began, Sondland made clear that Trump never told him that the military funding was contingent on investigations. In fact, he said that Trump never mentioned that military funding at all. The idea that it was conditioned on the investigations did not come from Trump, but, as Sondland explained, from his own interpretation “in the absence of any credible explanation” for why the money had been frozen.

Asked by Representative Adam Schiff whether “the military assistance was also being withheld pending Zelensky announcing these investigations,” Sondland replied: “That was my presumption. My personal presumption based on the facts at the time. Nothing was moving.” He then told Democratic counsel Daniel Goldman the same thing: “President Trump never told me directly that the aid was conditioned on the meetings. The only thing we got directly from [Rudy] Guiliani was that the Burisma and 2016 elections were conditioned on the White House meeting. The aid was my own personal, you know, guess.” And yet again: “Nobody told me directly that the aid was tied to anything. I was presuming it was.”

Sondland repeated the same message again and again, including in this exchange with Republican Representative Mike Turner:

Rep Mike Turner
No one on this planet told you that President Trump was tying aid to investigations. Yes or no?

Rep Mike Turner
So, you really have no testimony today that ties President Trump to a scheme to withhold aid from Ukraine in exchange for these investigations?

Ambass Sondland
Other than my own presumption.

Because he was only operating off of his “own presumption,” Sondland also revealed that a critical conversation with a Ukrainian official, Andriy Yermak, was far less explosive than initially believed. Two US officials—Bill Taylor, the top US diplomat in Ukraine, and Tim Morrison, a National Security Council aide—had testified that Sondland had linked the military funding to the investigations in a conversation with Yermak in Warsaw on September 1. This was a critical claim, as it potentially showed the first—and to this date, the only—explicit communication of such a linkage to the Ukrainian side.

But Sondland disclosed that he told Yermak exactly what he told Congress: that in the absence of an explanation for why the military aid had been frozen, he shared with his Ukrainian counterpart—in “a very, very brief pull-aside conversation”—that he merely presumed the freeze was tied to Ukraine’s willingness to announce an investigation:

And I don’t know if I came over to Yermak or he came over to me, but he said, “What’s going on here?” And I said, “I don’t know. It might all be tied together now, I have no idea.” I was presuming that it was, but it was a very short conversation.…
[…]
That was my presumption, my personal presumption based on the facts at the time, nothing was moving.

Sondland reiterated the point under questioning from Goldman, saying that he even told Yermak that: “I didn’t know exactly why” the freeze had been made, but that the investigations “could be a reason.”

Sondland’s presumption may well have been correct. The freeze on the military funding coincided with efforts by Trump officials to pressure the Ukrainian government to open investigations into alleged Ukrainian meddling in 2016 and Burisma, the Ukrainian firm where Joe Biden’s son, Hunter, obtained a lucrative board seat. But as I’ve written previously, a plausible presumption is not the same as evidence for a provable, impeachment-worthy case. And Sondland showed Congress that he only has the former. If he has no actual evidence that the military funding was linked to investigations (as he admitted in his testimony), then what he “presumed” and “believed” is just as useful for the purposes of an impeachment case as what anyone else presumed or believed. Another key US official, Kurt Volker, testified that he saw no such linkage at the time, and that he never conveyed such a connection to Ukraine (Volker has, however, revised his testimony to reflect that he now understands that an investigation of Biden was sought). And given that Sondland is the only known Trump official thought to have communicated the military funding precondition to the Ukrainian side, then he is in fact providing evidence that when such linkage, the basis for the impeachment case, was communicated to the Ukrainians, it was not at Trump’s behest.

If the evidence presented by the Democrats’ star witness is in fact only his “personal presumption” on the core issue, then Democrats face a major evidentiary hole. To date, no one else has filled it.

The impeachment hearings leave us with a gap between the evidence presented and the maximalist, “bombshell” interpretations drawn from it. That’s nothing new. The same dynamic drove Russiagate for nearly three years until it collapsed. And just like Russiagate, a major driver of Ukrainegate is an underlying hawkish posture toward Russia. It is abundantly clear that witness after witness disagreed with Trump’s decision to briefly freeze the military funding, and firmly believes that the United States should arm Ukraine in its conflict with Russian-backed forces in the Donbass region.

What is not at all clear is why anyone beyond Beltway war hawks should be enrolled in their Cold War designs. Schiff, the impeachment leader, declared that Ukrainians fighting Russian-backed forces are “fighting our fight too, to defend our country against Russian aggression.” In reality, Ukrainians are fighting a war that the United States helped start by backing the overthrow of a democratically elected Ukrainian government in 2014. President Barack Obama, who bears some responsibility for that war, tried to scale it back by rejecting intense Beltway pressure to send the military funding now at the heart of the impeachment inquiry. Among those national security state voices whose pleas Obama rebuffed was Bill Taylor, the Democrats’ opening witness.

If Democrats weren’t so invested in championing military spending that President Obama once resisted, they might see other phone calls beyond the July 25 Trump-Zelensky conversation to take issue with. In closed-door testimony, Pentagon official Laura Cooper revealed that concern about the frozen military funding arose after the defense department heard complaints from the funding’s prime beneficiaries: weapons manufacturers. After mid-August, Cooper said, “various folks in the Department started to get phone calls from industry”—the military industry that wanted its weapons purchased. “All of these US firms that were implementing [the weapons sales to Ukraine]—they were getting concerned,” Cooper added. So was the US Chamber of Commerce, which called her as well.

In a different time, a liberal opposition movement might be raising concerns of its own about war-profiteering phone calls; or the merits of fueling a war on the borders of the world’s other top nuclear power; or doing so in a way that arms and empowers far-right forces incorporated within the Ukrainian military. Instead, Democrats have been enlisted to champion that proxy war and the coffers of the military firms that profit from it.

The domestic consequences are no less important. As Democrats and media outlets devote endless hours to venerating a procession of hawkish bureaucrats and parsing their every word, issues that materially affect the lives of average voters are going—just as they were in the Russiagate era—largely ignored.

And for all of the speculation about a Trump presidency in peril and Republicans jumping ship, some signs point in a different direction. “As a political matter, the longer this goes, it is a real opportunity for Republicans to paint Democrats as unconcerned about the issues voters care more about,” a Republican strategist told The New York Times. Eyeing that chance, Republicans are discussing a strategy that would prolong a Senate impeachment trial as long as possible so as to overshadow the Democratic primary—“potentially keeping six contenders in Washington until the eve of the Iowa caucuses or longer,” The Washington Post notes.

Two of those contenders include the leading progressive candidates, Bernie Sanders and Elizabeth Warren. Couple the prospect of slowing their momentum with an impeachment process that to date has failed to substantiate its core allegation, and it is hard not to wonder if Democrats are staging a Russiagate sequel in more ways than one: “bombshells” that fizzle out, dangerous Cold War chauvinism emboldened, and Trump handed another gift for the fast-approaching 2020 campaign.