Joy Buolamwini stands for a portrait behind a while mask. A facial recognition researcher, Buolamwini has uncovered racial and gender bias in facial analysis tools. (AP Photo / Steven Senne)

Last week, The New York Times reported on the federal government’s plans to collect DNA samples from people in immigration custody, including asylum seekers. This is an infringement of civil rights and privacy, and opens the door to further misuse of data in the long term. There is no reason for people in custody to consent to this collection of personal data. Nor is there any clarity on the limits on how this data may be used in the future. The DNA samples will go into the FBI’s criminal database, even though requesting asylum is not a crime and entering the country illegally is only a misdemeanor. That makes the practice not only an invasion of privacy in the present but also potentially a way to skew statistics and arguments in debates over immigration in the future.

The collection of immigrant DNA is not an isolated policy. All around the world, personal data is harvested from the most vulnerable populations, without transparency, regulation, or principles. It’s a pattern we should all be concerned about, because it continues right up to the user agreements we click on again and again.

In February, the World Food Program (WFP) announced a five-year partnership with the data analytics company Palantir Technologies. While the WFP claimed that this partnership would help make emergency assistance to refugees and other food-insecure populations more efficient, it was broadly criticized within the international aid community for potential infringement of privacy. A group of researchers and data-focused organizations, including the Engine Room, the AI Now Institute, and DataKind, sent an open letter to the WFP, expressing their concerns over the lack of transparency in the agreement and the potential for de-anonymization, bias, violation of rights, and undermining of humanitarian principles, among other issues.

Many humanitarian agencies are struggling with how to integrate modern data collection and analysis into their work. Improvements in data technology offer the potential to improve processes and ease the challenges of working in chaotic, largely informal environments (as well as appealing to donors), but they also raise risks in terms of privacy, exposure, and the necessity of partnering with private-sector companies that may wish to profit from access to that data. 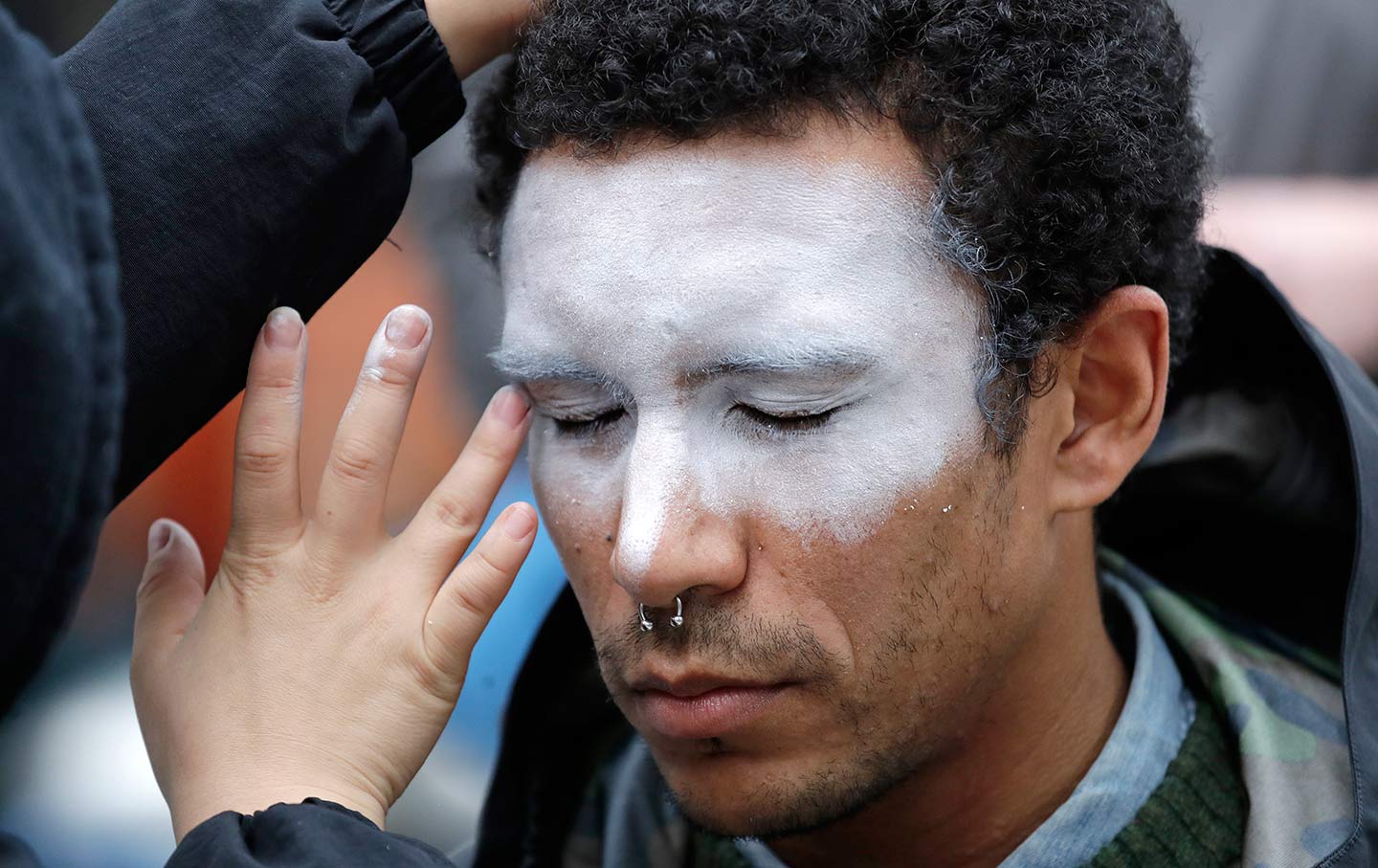 A man has his face painted to represent efforts to defeat facial recognition during a 2018 protest at Amazon’s headquarters over the company’s contracts with Palantir. (AP Photo / Elaine Thompson)

In August, for example, the United Nations High Commissioner for Refugees trumpeted its achievement in providing biometric identity cards to Rohingya refugees from Myanmar in Bangladesh. What wasn’t celebrated was the fact that refugees protested the cards both because of the way their identities were defined—the cards did not allow the option of identifying as Rohingya, calling them only “Myanmar nationals”—and out of concern that the biometric data might be shared with Myanmar on repatriation, raising echoes of the role ethnically marked identity cards played in the Rwandan genocide, among others. Writing about the Rohingya biometrics collection in the journal Social Media + Society, Mirca Madianou describes these initiatives as a kind of “techno-colonialism” in which “digital innovation and data practices reproduce the power asymmetries of humanitarianism, and…become constitutive of humanitarian crises themselves.”

Unprincipled data collection is not limited to refugee populations. The New York Daily News reported on Wednesday that Google has been using temporary employees, paid through a third party, to collect facial scans of dark-skinned people in an attempt to better balance its facial recognition database. According to the article, temporary workers were told “to go after people of color, conceal the fact that people’s faces were being recorded and even lie to maximize their data collections.” Target populations included homeless people and students. They were offered a five-dollar gift card (which is more than refugees and immigrant detainees get for their data) but, critically, were never informed about how the facial scans would be used, stored, or, apparently, collected.

A Google spokesperson told the Daily News that the data was being collected “to build fairness into Pixel 4’s face unlock feature” in the interests of “building an inclusive product.” Leaving aside whether contributing to the technology of a reportedly $900 phone is worthwhile for a homeless person, the collection of this data without formal consent or legal agreements leaves it open to being used for any number of other purposes, such as the policing of the homeless people who contributed it.

For governments, coerced data collection represents a way of making these chaotic populations visible, and therefore, in theory, controllable. These are also groups with very little recourse for rejecting data collection, offering states the opportunity to test out technologies of the future, like biometric identity cards, that might eventually become nationwide initiatives. For the private firms inevitably involved in implementing the complexities of data collection and management, these groups represent untapped value to surveillance capitalism, a term coined by Shoshana Zuboff to refer to the way corporations extract profit from data analysis; for example, by tracking behavior on Facebook or in Google searches to present targeted advertisements. In general, refugees, asylum seekers, and homeless people give companies far less data than the rest of us, meaning that there is still information to extract from them, compile, and sell for profits that the contributors of the data will never see.

One concern with this kind of unethical data sourcing means information collected for one stated goal may be used for another: In a recent New York Times Magazine article, McKenzie Funk details how data analytics developed during the previous administration to triage targeting toward “felons, not families” are now being used to track all immigrants, regardless of criminal status. Another issue is how the data is stored and protected, and how it might be misused by other actors in the case of a breach. A major concern for the Rohingya refugees was what might happen to them if their biometric data fell into the hands of the very groups that attacked them for their identity.

Both of these concerns should sound familiar to all of us. It seems like we hear about new data breaches on a daily basis, offering up the medical records, Social Security numbers, and shopping history of millions of customers to hackers and scammers. But even without insecurities, our data is routinely vacuumed up through our cell phones, browsers, and interactions with state bureaucracy (e.g., driver’s licenses)—and misused in immoral, illegal, or dangerous ways. Facebook has been forced to admit again and again that it has been sharing the detailed information it gets from tracking its users with third parties, ranging from apps to advertisers to firms attempting to influence the political sphere, like Cambridge Analytica. Apple has been accused of similar misuse.

Refugees or detained asylum seekers have less choice than most people to opt out of certain terms of service. But these coercive mechanisms affect us all. Getting a five-dollar gift card (not even cash!) may seem like a low price for which to sell a scan of your face, but it isn’t so different from what happens when we willingly click “I Agree” on those terms-of-service boxes. Even if we’re wary of the way our data is being used, it’s getting harder and harder to avoid giving it out. As our digital identities become increasingly entangled with functions like credit reporting, paying bills, and buying insurance, avoiding the big tech companies becomes more and more difficult. But when we opt in, we do so on the company’s terms—not our own. User agreements and privacy policies are notoriously difficult for even experts to understand, and a new Pew Research study showed that most US citizens are short on digital knowledge and particularly lacking in understanding of privacy and cybersecurity.

Like the subjects of Google’s unethical facial scans and the recipients of biometric identity cards in refugee camps, we have little control over how the data is used once we’ve given it up, and no meaningful metric for deciding when giving up our information becomes a worthwhile trade-off. We should be shocked by how companies and governments are abusing the data and privacy rights of the most vulnerable groups and individuals. But we should also recognize that it’s not so different from the compromises we are all routinely asked to make ourselves.