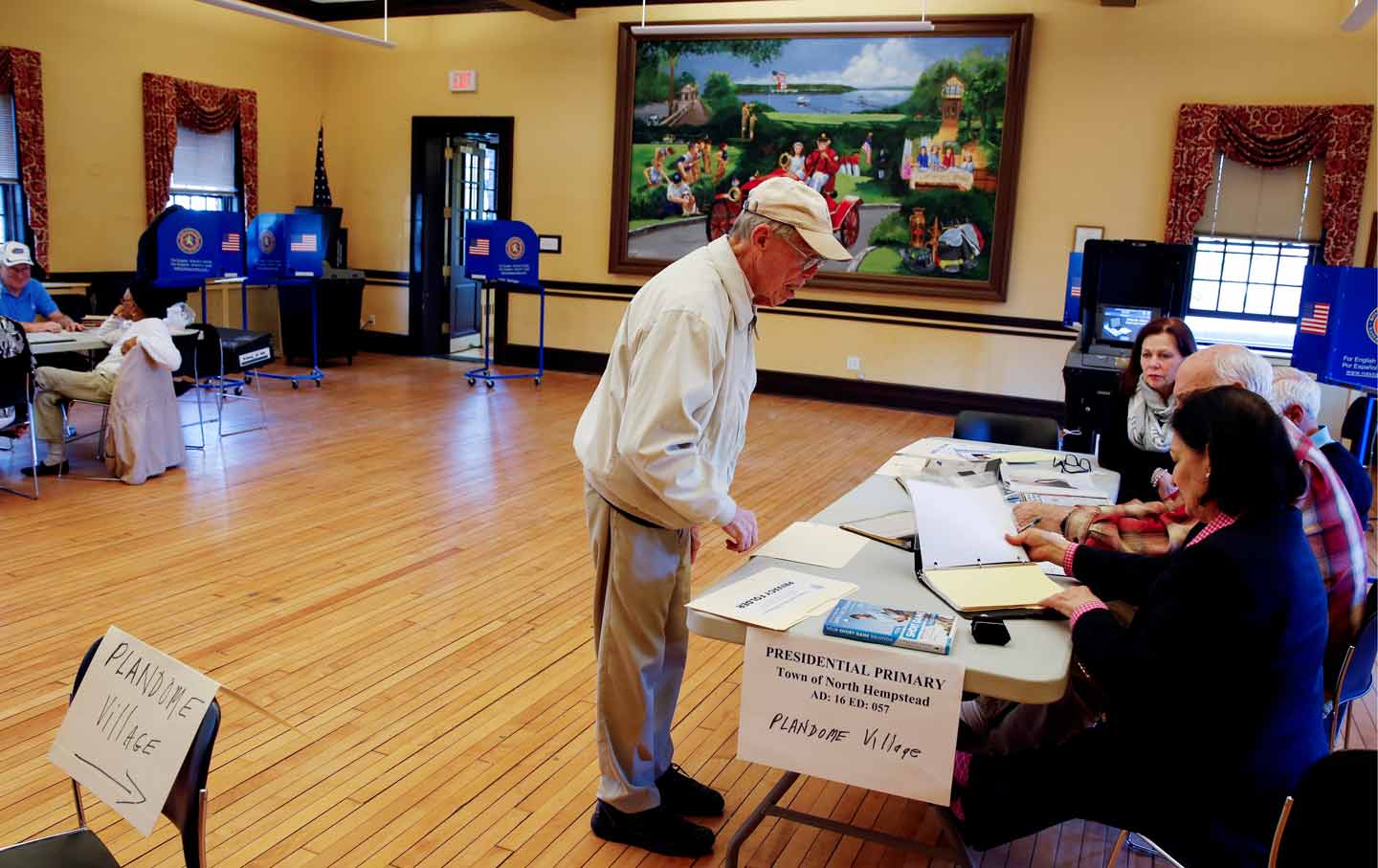 A man waits for his ballot to vote in the New York primary elections in Plandome Village, New York, on April 19, 2016. (Reuters / Shannon Stapleton)

Last week, I attempted to debunk allegations of widespread election fraud by the Clinton campaign that have been swirling around on social media. My argument was an appeal to common sense: If Hillary Clinton entered the race with a very large lead in the national polls and an enormous amount of support from Democratic Party activists and elected officials, as she did, and then quickly built up a significant lead in pledged delegates, as she did, then at no time since the start of the race, regardless of how unscrupulous her campaign might be, would there be any rational motive for risking infamy by rigging the vote. You don’t need to cheat when you’re winning.

That didn’t sit well with Harvey Wasserman and Bob Fitrakis, whose earlier piece for The Free Press, “Is the 2016 election already being stripped & flipped?,” I had mentioned briefly in the column. They’ve now published a lengthy broadside accusing me, and The Nation, of not being able to handle the truth when it comes to “election theft.” (It’s an odd charge, given that my Nation colleague Ari Berman has done some of the best reporting in the country on vote suppression.)

It’s unfortunate that Wasserman and Fitrakis didn’t engage my argument (or link to my piece so that readers might judge it for themselves). Instead, they waved away the idea that looking at motive is a legitimate way of evaluating the likelihood that a crime has been committed, writing that the argument was “a bit hard to follow.”

Of the 2016 election, they write that millions of Democratic voters have “already been stripped from the voter rolls in critical states like Ohio.” They noted that most votes Americans will cast this year will be tallied on electronic voting machines that have no auditable paper trail. And they claim that primary exit polls offer evidence that Bernie Sanders is “doing far better than the official vote count.”

But how well do these claims support the charge that the primaries are being rigged? Without getting too deep into the weeds, what’s clear is that Fitrakis and Wasserman don’t require much in the way of evidence to allege that an election is being stolen.

An example: In their original piece, they claimed that in Iowa, “Clinton’s ‘victory’ apparently turned on six coin tosses, all of which she allegedly won.” That would have been odd. But, as I wrote to Wasserman via e-mail on April 3, this was an early report that had later been proven erroneous by CNN, NPR and The Atlantic, among others. There’s no complete record of the ties that were decided by a coin flip in Iowa, but two things are clear: Sanders won his share, and since each flip determined only a tiny fraction of a single delegate, they had zero impact on the outcome. But as of this writing, their post remains uncorrected.

Another: Fitrakis and Wasserman claim that “there’s clear evidence that Bernie actually won the Massachusetts primary, which the corporate media and official vote count gave to Hillary.” They write that polls in Massachusetts showed “Bernie substantially ahead of Clinton prior to the voting,” but FiveThirtyEight’s weighted polling average on the eve of the primary had Clinton up by double digits and gave her a 94 percent chance of winning. Given that Clinton won in a squeaker, it was actually Sanders who did better than the polls predicted.

They go on to cite an analysis by Richard Charnin, who writes a blog devoted to “JFK conspiracy and systemic election fraud analysis,” claiming that, as Fitrakis and Wasserman put it, “Bernie won all the precincts with hand-counted paper ballots but lost all the ones with electronic voting machines.” The implication is clear, but the problem is that, even if Charnin’s numbers are accurate, the vast majority of precincts in Massachusetts use optical scanners. So we run into a small sample problem, and a result that’s easily explained by Sanders’s faring better than Clinton in small, rural towns that hand-count their votes.

Fitrakis and Wasserman have done some important work. Their research into irregularities during the 2004 election in Ohio revealed problems that were largely overlooked by the mainstream media. They’ve worked hard to bring attention to a variety of problems plaguing our election systems. And Wasserman has played a key role in the “no nukes” movement going back to the 1970s.

But when Mark Hertsgaard went back and did some original reporting for Mother Jones, he found that a number of their central claims about Ohio didn’t hold up. Hertsgaard came away convinced that “there was indeed something rotten in the state of Ohio in 2004,” but noted that “it remains far from clear that Bush stole the election,” in large part because “some of the most far-reaching acts of potential disenfranchisement, such as the purging of voter rolls, were legal.” Hertsgaard added that “the focus on vote rigging distracts from other explanations for the 2004 outcome.”

And since then, Fitrakis and Wasserman have continued to reprise the same story. They predicted that the 2008 and 2012 elections were being rigged, and are now warning that the same thing, using the same methods, is now occurring in 2016—in the primaries, as well as the general.

Steve Rosenfeld, Wasserman and Fitrakis’s co-author of the 2006 book What Happened in Ohio: A Documentary Record of Theft And Fraud in the 2004 Election, told me that while the pair “have done some important reporting, they undermine their brand by being unnecessarily sensational about stuff that later proves to be irrelevant.” He described them as members of a small community of lefty journalists who get lots of traffic by “making outrageous claims about voting scares.”

Rosenfeld notes that in 2008 their book was used by the Obama campaign to design its successful election-protection strategy in Ohio, which included tracking which companies programmed voting machines so any problems could be quickly quarantined. He explained that purging inactive voters is a routine matter of voter-roll housekeeping that isn’t evidence of wrongdoing. Voter purges have been abused in the past—notably by Florida Secretary of State Katherine Harris prior to the 2000 election—but they now get a lot more scrutiny in the wake of that debacle. “Just because something was true in 2000 or 2004 doesn’t mean it’s going to be a problem in 2016,” Rosenfeld said. (Ari Berman argued in The Nation that the attention on Harris’s purge gave rise to a new wave of Republican efforts to suppress the Democratic vote by passing new ID laws, restricting voting hours, and limiting polling places.)

Rosenfeld is quick to point out that Fitrakis and Wasserman are right that electronic voting machines don’t offer an auditable paper trail. But he says the larger issue is that elections are underfunded, and we rely on antiquated equipment that’s often poorly calibrated. Asked about Fitrakis and Wasserman’s claim that “GOP governors and secretaries of state will have a free hand to flip the vote count to whatever they want it to be without detection or accountability,” Rosenfeld said, “There are just too many stretches embedded in that assertion. People are going to be watching the vote count, however imperfectly, at every stage along the way, and it won’t allow for that kind of wholesale theft to go unnoticed.”

There’s no doubt that our fractured election system is a disgrace. On Tuesday, tens of thousands of New Yorkers found that their voter registrations had been botched or disappeared. Others were surprised to find that the deadline to switch party registration in the Empire State, which has closed primaries, was way back in October, long before most people started paying attention to the campaign. But those who believe these problems are prima facie evidence of foul play—a belief that seemed widespread on social media Tuesday night—are misinformed. There’s nothing new about New York’s elections’ being a total mess. Back in 2012, Michael Powell reported for The New York Times that during the 2010 campaign the Board of Elections disqualified 40 percent of the vote in two Bronx precincts and “sent out an absentee ballot instructing voters to fill out the bubble above the name of the candidate they favored, instead of below it.” During the 2012 primary, the board’s initial count recorded no vote counts in 79 of the 13th District’s 506 precincts. “The board’s incompetence,” wrote Powell, “is well established.” He cited reports of poor election administration dating back to the mid-1980s. And the deadline for switching parties was enacted in the late 1800s.

In 2004, the late scholar Robert Pastor, who had worked as an international elections monitor in emerging democracies for the Carter Center, wrote about 10 different metrics that his team had used to evaluate the strength of countries’ election processes. “On all 10 dimensions of election administration,” he wrote, “the United States scores near the bottom of electoral democracies.… We have been sloppy and have not insisted that our voting machines be as free from error as our washing machines.… we lack uniform standards, and…have devolved authority to the lowest, poorest level of government.” Twelve years later, and 16 years after the debacle in Florida, those structural realities haven’t changed. If anything, it’s gotten worse, as a slew of Republican legislatures have passed restrictive voting laws designed to disenfranchise voting blocs that tend to skew toward Democrats. A study by researchers at the University of California–San Diego released earlier this year confirmed what everyone already knew: In states with strict voter-ID laws, Democratic turnout drops by 7.7 percentage points and Republican turnout drops by only 4.6 points.

Fitrakis and Wasserman join these very serious problems with innuendo and thin evidence to claim that virtually all elections, including the 2016 primaries, are rigged. They dismiss those of us who don’t buy their claims as being incapable of handling the truth. But skepticism goes both ways, and true skeptics require more concrete evidence than Fitrakis and Wasserman are able to offer.