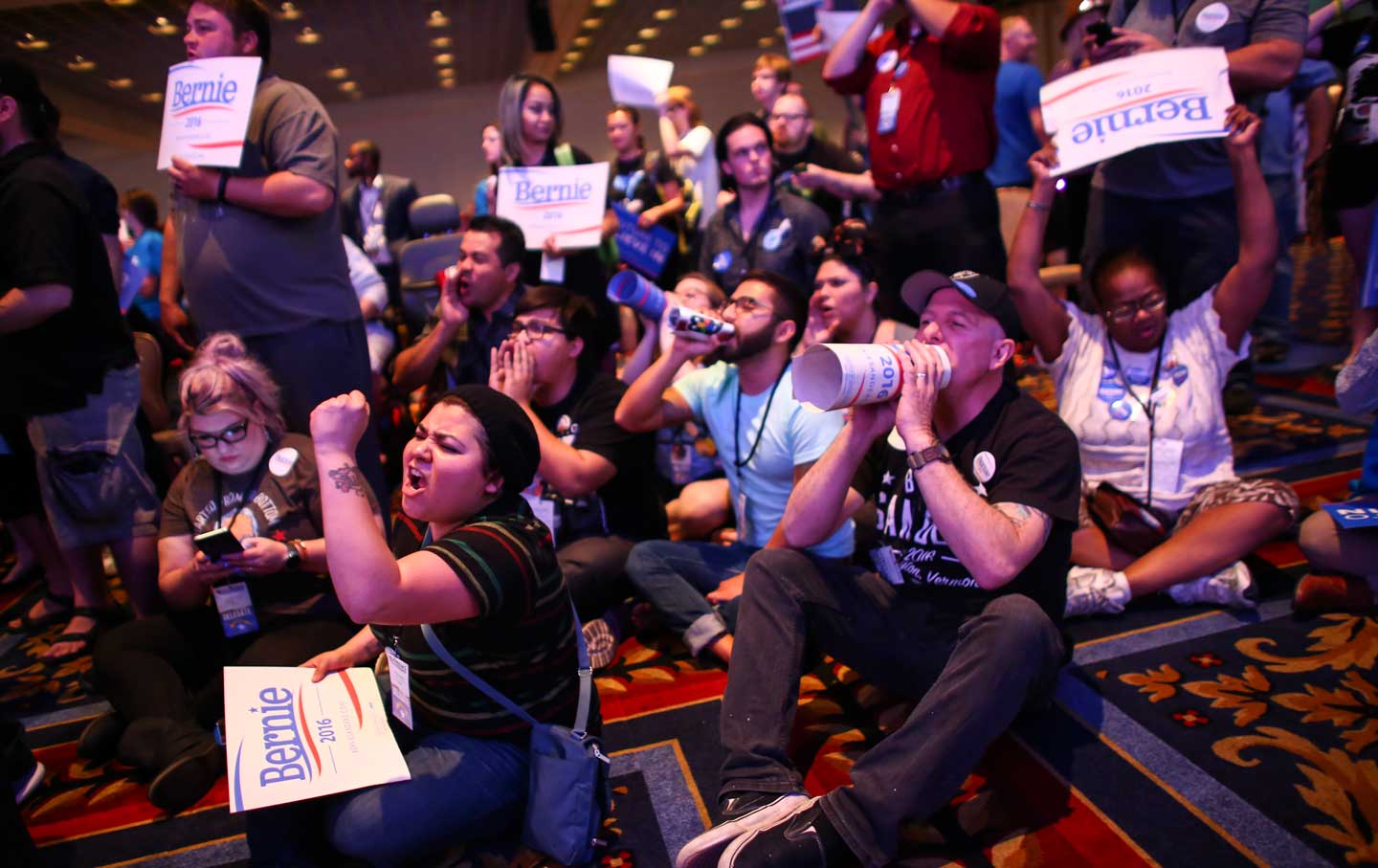 Supporters of Bernie Sanders gathered in the front of the room during the Nevada State Democratic Party’s 2016 State Convention. (Chase Stevens / Las Vegas Review-Journal via AP)

Bernie Sanders is in a strong position to shake up Democratic Party politics. But the chaos at last week’s Nevada state convention reveals a real possibility that his candidacy could end up as little more than a footnote in the story of the 2016 campaign.

Sanders didn’t get into the race because of ego, or a quest for personal power. In 2013, John Nichols reported for The Nation that Sanders doubted he would run for president if another candidate offered “a seriously focused and seriously competitive populist alternative to politics as usual.” A year later, he told Salon he was considering a run because “the nature of media is that presidential campaigns…are a means…of getting these issues out there.”

In that sense, it’s impossible to overstate how successful he’s been. Not only because he’s won 20 primary contests, or moved Hillary Clinton demonstrably to the left on a number of key issues—for the first time in five years, a majority of Americans say it’s the government’s responsibility “to make sure all Americans have health-care coverage,” and a plurality—including most Democrats—are now in favor of tuition-free public colleges and universities.

Meanwhile, according to a Morning Consult survey, Sanders is now the most popular senator on Capitol Hill. He has an opportunity to end the race as one of the most popular presidential candidates in recent history.

But the kinds of sweeping, transformational changes that Sanders calls for have only ever been achieved with a coordinated inside/outside strategy. While Sanders supporters are quick to note that Hillary Clinton can’t win the 2016 election without their support, many of them overlook the fact that the broader progressive movement can’t achieve the goals Sanders champions if it alienates those who backed Clinton.

The Sanders campaign has created serious progressive infrastructure independent of the Democratic Party. As Micah Sifry reported for The Nation back in March, they’ve given thousands of activists the tools they need to fight effectively at the local level. So that’s the “outside” part of the strategy.

If Clinton becomes the 45th president, the course of her her presidency will in large part be shaped by what can get through the next Congress. Zack Exley, the former organizing director for MoveOn and until recently a key adviser to Sanders, was among a group of staffers who left the campaign last month to launch the Brand New Congress PAC to push lawmakers to adopt key parts of Sanders’s progressive agenda. And Sanders could become part of an influential group of progressive lawmakers—along with Elizabeth Warren, Sheldon Whitehouse, and others—advancing that agenda from the inside.

But what could be a potent inside/outside strategy won’t amount to much if it’s embraced only by those who supported Sanders’s candidacy. Which brings us to the Nevada State Convention, where tensions within the Democratic coalition really came to a boil.

Now that the dust has settled, a few facts have become clear.

It’s true that the Nevada Democratic Party bears some blame for the bedlam that unfolded. “Could they have done anything to mitigate the anger? I’m 100 percent certain that the answer is ‘yes,’” Jon Ralston, the veteran Nevada political reporter, told me. Then, in the wake of the chaos, the state party threw gas on the fire by publicly accusing Sanders supporters of throwing chairs, issuing death threats, and committing acts of violence—claims that were widely repeated by the media, but don’t appear to be supported by the available evidence.

But the lion’s share of the responsibility for what happened rests with Sanders supporters who refused to accept that the Clinton campaign had out-organized them and come into the convention with more delegates.

Nevada has a ridiculously complicated, three-tiered caucus system. Clinton had won the first round in February, and took home 13 of the 23 delegates awarded at that stage of the process. The win also gave her more delegate slots for the second round—the county conventions in April. But delegates are real people with real lives, and getting them to go to a convention months after they’re elected can be tough. The Sanders campaign did a better job getting their people to the county conventions and, despite losing the first round, they actually ended up with more delegate slots for the state convention than the Clinton team.

So they thought they had “flipped” the results for the 12 delegates that would be awarded at the state convention last week. But, as Politifact Nevada noted in its analysis—which concluded that the Sanders camp’s claims of fraud and misconduct were “false”—this time, it was the Sanders campaign that got out-hustled, leaving almost 500 of their slots unfilled. The Clinton campaign, on the other hand, go their people to fill all but a handful of their slots.

Sanders supporters were then outraged that the Clinton camp had challenged 64 delegates for not registering before the deadline or not providing required information, but they haven’t disputed the state party’s claim that only eight of the 64 contested delegates showed up at the convention and six of them were eventually seated.

At the convention, Sanders supporters offered a number of procedural motions in an attempt to gain control of the proceedings. They were obviously opposed by Clinton’s attendees. Nevada party chair Roberta Lange took voice votes on these motions, and there was a lot of outrage in Berniestan after videos surfaced that appeared to show her ruling against the Sanders side even though the Sanders supporters were louder.

But Ralston explains that she was right to rule against the Sanders camp’s motions, because there were more Clinton delegates in the room. “Roberta Lange knew from the credential report that the Clinton side had more people,” says Ralston. “The Sanders people were clearly louder, in my opinion, but that’s not how voice votes work. Lange went with the numbers.”

So there was lots of drama, but what stands out about the Nevada ruckus is how little was at stake. Barring some extraordinary occurrence like a meteor striking the hotel, one candidate was always going to emerge with seven of those at-large delegates, while the other would walk away with five. That those two delegates would affect the ultimate outcome of the primaries is about as likely as that meteor strike.

The key point is that the whole brouhaha was ultimately fueled by the widely held belief among Sanders supporters that Clinton’s victories are illegitimate—that she’s on the verge of clinching the nomination only because of the DNC’s chicanery or media bias. At some point, they need to understand that Sanders is trailing in this race because his campaign hasn’t resonated with key groups of Democratic primary voters—African Americans, women, and people over the age of 45.

Most of those voters aren’t right-wingers or sell-outs or “establishment shills,” and if Sanders’s campaign alienates them too badly, he’ll end up with as much influence over the future of the party as Ralph Nader. So yes, Hillary Clinton needs Sanders’s supporters to win the 2016 election, but Sanders needs Clinton’s backers to bring about any real change in Democratic Party politics. It’s a two-way street.