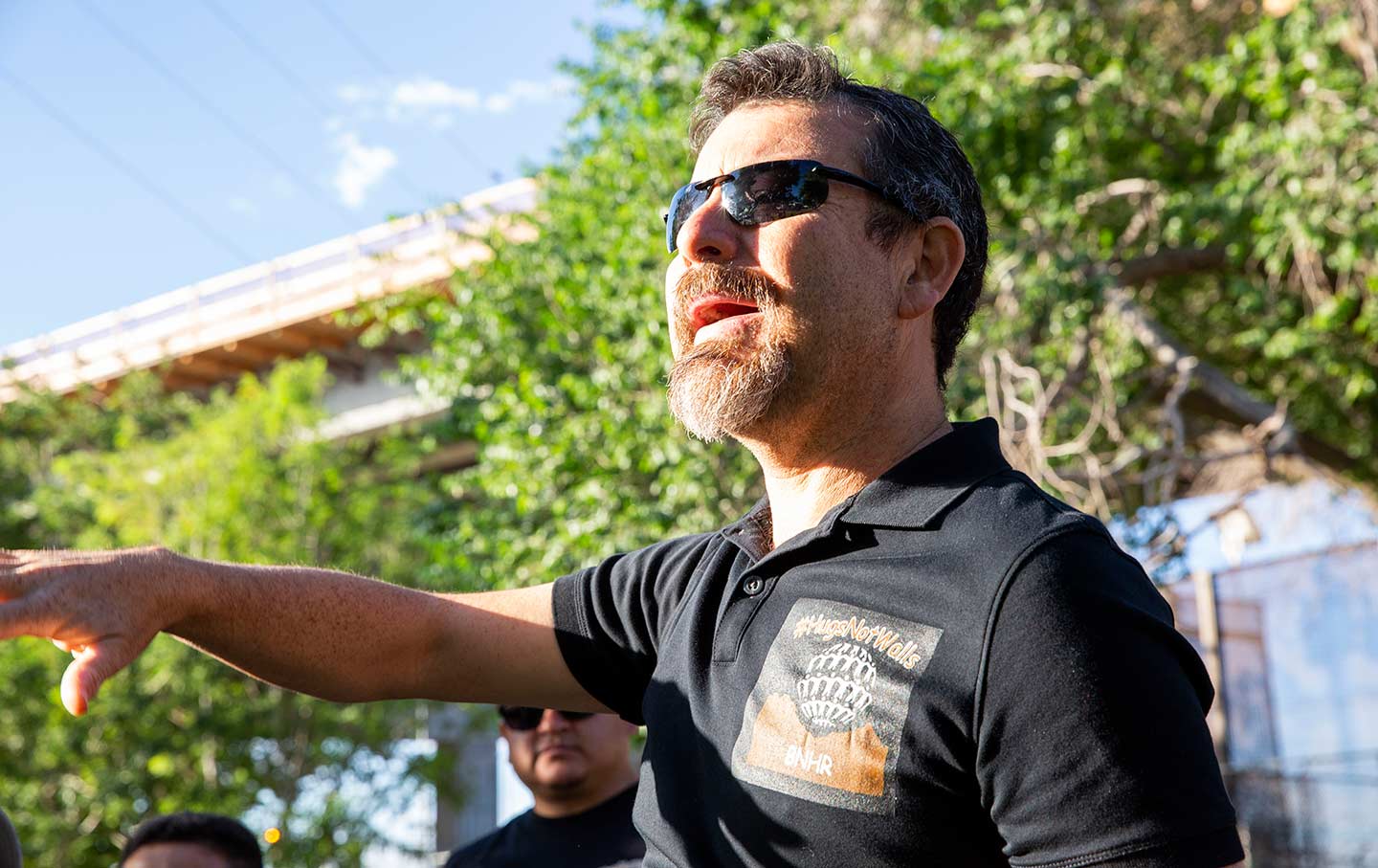 Far from the plodding bureaucracy of the United Nations, activists on the US-Mexico border are redefining what it means to defend human rights in the 21st century. The Border Network for Human Rights (BNHR) in El Paso, Texas, is a 20-year-old organization built from the ground up. Its strategy centers around a profound and unique philosophy: that in order to build a society that respects human rights, the people in it must believe in their own dignity, even in the face of systemic oppression and violence.

Gabriela Castañeda, a previously undocumented mother of three, has been separated from her husband for 10 years after a series of crossings, deportations, reentries, and incarceration. She’s experienced the pain of US border policy firsthand, and has lived subsumed in a culture that reinforces the fear associated with rightlessness.

“For you to believe that you have rights is a long process, especially after so many years of being told that you are a criminal because you crossed the river,” she says. “I became a member of this organization, and shortly after I was the one asking more questions. So they invited me to become a human-rights promoter.”

At a moment when critics talk about human rights in its “twilight,” at “endtimes,” or as “failed,” the Border Network reimagines human rights outside of its elite, top-down, professional forms, anchoring its commitments firmly in personal relationships. Promoters hold meetings in their neighbors’ homes over coffee. They teach on the Universal Declaration of Human Rights, the US Constitution, and the history of immigration. Sharing this knowledge and exposing neighbors to international human-rights norms helps them reconsider their own situations.

Castañeda says that since joining, her life has been transformed. She began as an eager audience member surprised to hear that she, as an undocumented immigrant, had legal rights. In her current role as the organization’s communication director, she is a leader, an example, and a proof of concept.

It is also in these living rooms and around these kitchen tables that individuals share their own experiences of abuse, face-to-face in a space structured by trust. For Fernando Garcia, BNHR’s executive director, the home is a crucial arena for the organization.

“They were looking for a space to tell the story. Because sometimes when you don’t tell the story of abuse it becomes a burden in your life,” Garcia explains. Alleviating that burden transforms people and reminds them who they are: not victims but individuals who deserve respect, dignity, and fair treatment before the law.

“That is what I call building consciousness, destroying the different layers of oppression and darkness that doesn’t allow them to see that they can change reality,” Garcia goes on. If the reality of immigrant communities is defined by harassment, intimidation, and demonization, a new reality can only come out of a revolution of the soul and of the spirit. “Members of our community that were extremely afraid…. they didn’t feel that they were empowered, they did not feel that they were the subjects of change.”

In the United States, human rights is not a popular word in our political vocabulary. Nor is it employed to describe everyday struggles for justice or equality. Our associations with human rights are largely connected to distant crises, things that happen “over there.” This attitude is an expression of American exceptionalism in which the United States does not and cannot violate the human rights of its own citizens.

That’s the case around the world, too. Since the human-rights movement began in the mid-1970s, major transnational human-rights NGOs have made few enduring investments in people or communities. Instead of sustainable growth, campaigns of mass appeal are solicited for one-off, transactional responses only.

Movement-building, in the sense modeled by BNHR, has never been a significant component of the mainstream human-rights community; Amnesty International’s chapter structure is the closest approximation, but the organization has never devoted any significant effort to grassroots organizing.

Instead, NGOs rely on prefigured associations with human rights motivated by a generalized humanitarian sensibility underwritten by graphic images and stories of suffering and other reductive narratives. The very notion of a “human-rights community,” let alone a “movement,” is at best a wishful moniker. To take seriously the implications of these labels is to be deeply skeptical about the current constitution of the human-rights universe.

By contrast, Fernando Garcia asserts that this model of movement-building constitutes the “ideology” of the Border Network. “Political organizing means transforming personal relations into political relationships.”

Rather than leading with a hard sell, Garcia focuses on forging one-on-one connections in the hope that they will become more engaged. This strategy does not work in every instance, and, he admits, it is an incredibly slow and laborious process: While he learned from the Chicano movement and the United Farm Workers, Garcia reveals that his model is fundamentally inspired by Avon, Mary Kay, and Tupperware, with salespeople trained and motivated to go door-to-door peddling wares to unsuspecting neighbors: “They opened their door, I went in, I started talking, and then they started inviting other people.”

These methods are a far cry from the benefit concerts and celebrity spokespersons that characterize high-profile human-rights-advocacy initiatives today. With its old-fashioned, getting-to-know-you organizing, BNHR feels cut from a traditional cloth, and maybe that’s exactly what we need at a time when the bonds forged between NGOs and supporters through campaigns of mass appeal feel shallow and superficial.

What’s more, awareness-raising is not the same as consciousness-building, to borrow Garcia’s phrase. Take, for instance, the case of the Save Darfur Coalition, which was so determined to frame the Sudanese conflict as a genocide that it resorted to crude generalizations. Having a bumper-sticker-ready phrase provided a prepackaged branding campaign, even as its slogans grew distant from the more complex realities. Human beings were not ends but means, and recognized not for their humanity, for their dignity, or for their own individuality, but for their instrumental value.

If human rights is to survive this era of mass appeal, we need an alternative model, and Fernando Garcia’s work provides a blueprint.

“I believe [members] are going to see things that they didn’t see before. When they start acknowledging that they are human beings with dignity and rights, then they start seeing things around and they will not accept any more abuse” he says. “They would not accept the reality they are living. And the goal is to build a powerful community organizing process that can change reality.”

This sentiment is buried deep in the fabric of human rights, filtered and repurposed by focus-grouped slogans, glitzy campaigns, and vapid ambassadors, and lost through a world-historic game of telephone. For the community constituting the Border Network, human rights is subversive because it seeks to remake society by resurrecting the self-worth of those individuals deemed to be unworthy of rights and protection. At a moment when transnational frameworks are not popular and international agreements even less so, less so, the border network reminds us of the lasting currency of human rights, and their future potential to be a language of struggle.