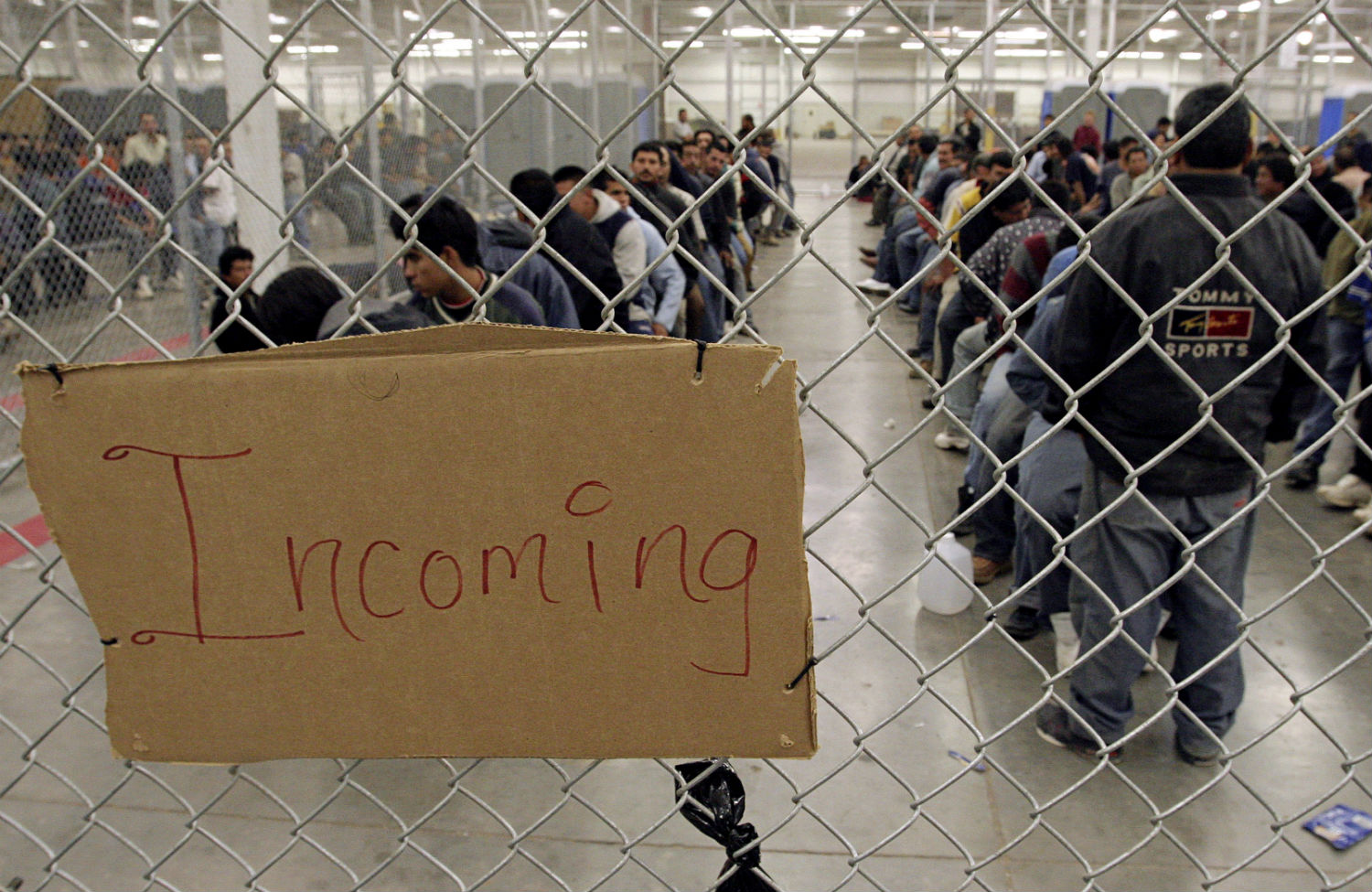 Undocumented immigrants wait in a holding facility after arriving at the US Border Patrol detention center in Nogales, Arizona. (Reuters/Jeff Topping)

McAllen, Texas—The most important single object that Esperanza Ramirez and her 3-year-old daughter brought with them on their thirteen-day, 1,200-mile exodus through Mexico was a tiny piece of paper with the telephone number of Esperanza’s sister on Long Island. She folded the paper to make it even smaller, and hid it among the few things they carried. Criminal drug gangs along the Gulf of Mexico have gone into a lucrative side business: kidnapping Central Americans from the stream of refugees fleeing north, and forcing them to call their relatives in the United States to wire ransom money. “I knew that you can’t let them find out that you have contacts up here,” she said as her exhausted little girl, Angelica, slept in her lap. “It’s better if they think you are poor and alone.”

The Ramirezes (their names have been changed to protect them from retribution) got through Mexico and crossed the Rio Grande just south of here safely, but Esperanza, who is 24, has had to live with violence her entire life. She and her daughter had just fled the most dangerous city in the world, San Pedro Sula, Honduras, where the two biggest criminal gangs, which have memberships across the region in the tens of thousands, fight with automatic weapons. The city has become a war zone, with a murder rate of 193 per 100,000 (New York City’s rate is 5.1). Angelica’s father died in gang-related violence a couple of years ago. “In some neighborhoods, people are abandoning their homes from fear,” she said. “The gangs are even murdering 8-year-old kids who will not join them.”

Under both international and American law, Esperanza and Angelica Ramirez have a strong case for asylum in the United States. But the United States has a particular moral responsibility in the Central America refugee crisis that goes even deeper. Americans, especially young Americans, probably know more about the 1994 genocide in Rwanda than they do about how their own government funded murderous right-wing dictatorships in Central America back in the 1980s. The Reagan administration’s violent and immoral policy included $5 billion in aid to the military/landowner alliance in El Salvador, which prolonged an awful conflict in which some 75,000 people died—a toll proportionally equivalent to the casualty rate in the American Civil War. But once shaky peace agreements were signed in the 1990s, the United States walked away, leaving the shattered region to rebuild on its own.

In response to today’s exodus, President Obama is showing little concern for international law, and none at all for Washington’s own historic responsibility in Central America. Instead, the administration announced on June 28 that it is asking Congress to change the law so America can deport the refugee children more quickly.

The very name of one of the giant criminal gangs—18th Street, or Calle 18—reveals the origins of the current crisis. Eighteenth Street is not in San Pedro Sula, or in San Salvador, or in any of the other Central American cities torn apart by gang warfare. Eighteenth Street is actually in Los Angeles, where the gang and its rival, the Mara Salvatrucha, were born among young Salvadorans who had been displaced by the civil war in the 1980s. After the United States started deporting gang members, they arrived back in Central America, some barely speaking Spanish and knowing only how to do one thing: grab the weapons the region was already awash in and start killing. During the decade-long civil war, family and community life had weakened, so the newly arrived gangs partly filled a vacuum.

America’s responsibility in Honduras, Esperanza and Angelica Ramirez’s home nation, is even more recent. In 2009, the Honduran military overthrew the elected government, and the Obama administration accepted the coup over the protests of brave pro-democracy forces there. The respected International Crisis Group explains that the political turmoil weakened the central government, and in some places the criminal gangs became the de facto authority. What’s more, Washington’s war on drugs, in Honduras and elsewhere, has also raised the overall level of violence.

Here in McAllen, the community center of the Sacred Heart Catholic Church has become a relief station for adults with children who are pouring across the border in the Rio Grande Valley. Children who are by themselves do not come here; they are held in the overcrowded Border Patrol detention centers until a relative who is already in the United States sends them funds for an air ticket to join them, pending a resolution of their immigration case. (Roughly 90 percent of the Central Americans already have a family member in the United States.)

What stands out here in the Welcome Center is how young some of the kids are; a girl toddler clutching a little stuffed white bear, a crew-cut 4-year-old playing with a toy car, even a mother breast-feeding. As family groups continue to come through the door, exhausted and thirsty, the volunteers applaud them. Sister Norma Pimentel, who is managing the relief effort, says, “They are our guests, and we will treat them with love and respect.”

Kimi Jackson directs the ProBAR legal aid project in nearby Harlingen, and her nine full-time attorneys have been swamped by the number of refugees. She points out that many of the Central Americans are entitled to “legal relief,” which may allow them to remain in the United States, and she and her staff try to visit the children in the Border Patrol detention facilities to give a “Know Your Rights” talk. (In a March report, “Children on the Run,” the United Nations High Commissioner for Refugees estimated that 58 percent of the Central Americans fleeing across Mexico have been “forcibly displaced” and are therefore entitled to “international protection.”)

Jackson is worried, though, that many of the refugees may not get the legal help they deserve. “We have kids as little as 6 or 7 years old representing themselves in front of immigration judges,” she said. (There is a proposal in Congress, called the Viva Act, to fund legal aid for the new arrivals, but in the present hostile anti-immigrant climate, it is not likely to pass.) KIND (Kids in Need of Defense), an organization with branches in major American cities, tries to provide unaccompanied children with pro bono attorneys.

There is circumstantial proof that this latest surge of Central American mothers and children is made up of genuine refugees from widespread violence, and not of economic migrants. The Border Patrol itself reports that despite the explosion of unaccompanied children—the number is expected to reach 90,000 by September 30—its overall apprehension figures along the frontier have only increased slightly, and “remain at historic lows.” (Conspicuously absent among the exodus are children from Nicaragua, a country that is even poorer than El Salvador, Honduras and Guatemala, but that does not have a criminal gang crisis.)

In a day or two, the odyssey of Esperanza and Angelica Ramirez will continue. She did use that precious phone number to reach her sister, who wired the money for two bus tickets. The trip will take fifty-one hours. Ramirez will be given an appointment with an immigration judge in New York State.

During our long conversation, Ramirez stayed cheerful and energetic. She even found it amusing that one stage of their journey was actually inside a Mexican squad car; the Ramirez’s coyote, or hired guide, must have paid off the police. Their most frightening moment was crossing the Rio Grande; the raft was overcrowded and she does not know how to swim.

In the end, though, Ramirez did break down in tears, when she recounted her last few days in Border Patrol custody. Someone among the authorities—she was not specific about who—told her and the other women and children who were also sleeping on the detention center floor that they were “parasites” who were coming to the United States to live off people here. “That’s not true,” she said, crying slightly. “It hurt to hear that. I will do any kind of work. But where we come from there is no work at all. It’s not even safe to leave the house.”