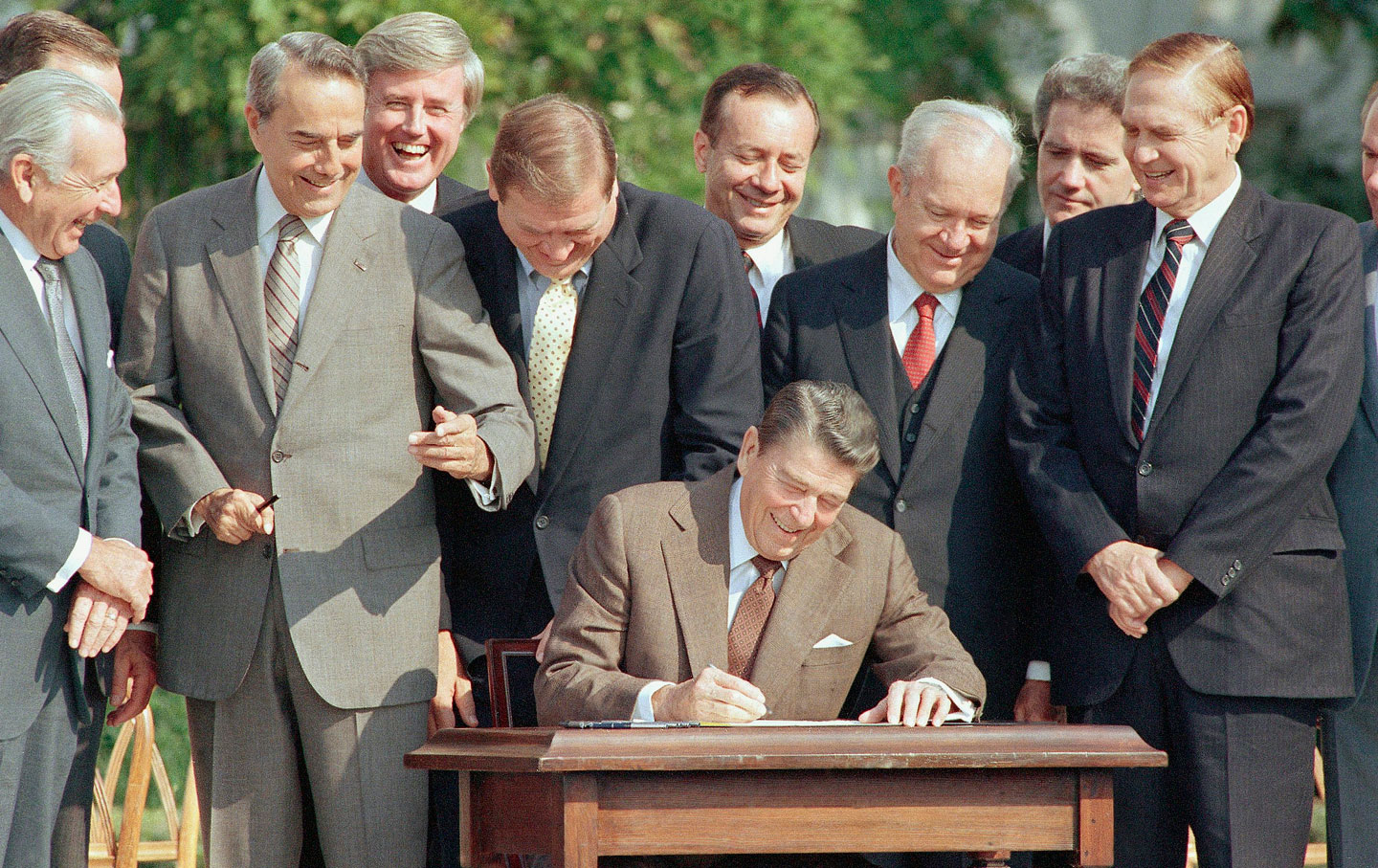 More than a third of a century after Ronald Reagan led America down a costly and unnecessary path into extreme income and wealth inequality, the opportunity to restore broad prosperity is rising before us. This is a moment not for despair, but resolve—and hard work.

Income inequality has become so outrageous that even Republicans vying for their party’s presidential nomination are talking about it, though not their party’s role in creating it or any workable solutions. On television the talking heads wring their hands, saying, “If only we could afford the costs of digging ourselves out of the economic hell most Americans have been shoved into.”

Actually, America has an immense pool of money that can be put to work closing the nation’s extreme inequality gap. Doing so will also improve our health, longevity, level of education, and knowledge.

Before getting to that, though, let’s take a quick look at the latest data.

In June, for the first time, the Internal Revenue Service released data on not just the top 1 percent, but also the top one-thousandth of 1 percent. The report excludes dependent children who file their own tax returns because they have a trust fund or work.

Even for those who know that the average income reported by nine out of 10 households has fallen back to the level it stood at in 1966, this is a shocking report.

My analysis shows that from 2003 through 2012, the bottom 90 percent of Americans saw their incomes decline by 6 percent, or about $200 a month.

Think about that. America has 136 million primary taxpayer households. Over those ten years just 1,361 households raked in 8 percent of all the increased income in America.

The awful truth is that the great industrial engine that once created rising prosperity for the vast majority has been converted into a mining operation. Instead of creating new wealth by making ever more useful widgets and services ever more efficiently, today’s economic titans mine the pockets of the many.

We see this in the private-equity, high-speed trading, and hedge-fund operators who combine scads of borrowed money, favorable accounting rules, and offshore companies that block taxes to report huge profits. They rarely create new enterprises or improve existing ones. Instead they strip companies of their assets and froth the stock exchanges so they can collect profitable bubbles.

The biggest multinational corporations don’t even pay corporate income taxes. Rather they profit off them, something I exposed 13 years ago and that a three-volume study by the Congressional Joint Committee on Taxation later confirmed.

What makes this possible are a few seemingly innocuous words slipped into the 1986 Tax Reform Act that hardly anyone noticed at the time. Those words allow multinational corporations to evade the caps on how much cash and near-cash domestic companies can hold by simply moving their profits offshore.

Since 1909 Congress has limited cash hoarding because it damages the economy. Just as the economy would collapse if everyone cashed their paychecks and stuffed greenbacks in their mattresses, so too is economic growth damaged when corporations hoard cash instead of reinvesting.

But under the 1986 law American companies pay royalties, rents, and fees to their offshore subsidiaries, using accounting alchemy to convert profits into expenses. As long as those profits are held in so-called deferral accounts with an offshore mailing address, no taxes are due.

You would get the same deal if Congress let you take a deduction for every dollar in your right pocket that you moved to your left pocket and kept there.

The next part, though, is even more perverse: the multinationals buy the Treasury bonds that the federal government sells because it didn’t collect those corporate taxes right away. The government then pays these multinationals interest on their deferred taxes.

Do this for long enough and the magic of compound interest will result in more money than the value of the taxes owed, which are eroded by inflation. In effect Uncle Sam loans these companies their taxes at 0 percent interest and then pays them interest on the loan. If you could get a bank to do that for you when you buy a house, after three decades with no payments you would have enough money to pay the bank the deferred purchase price and enjoy three to four times the house’s price in cash.

Of course, no banker is dumb enough to give you that deal. But Congress gives it to multinationals like Apple and GE and to billionaires like Warren Buffett every day. So when their shareholder reports indicate that they paid a tiny percentage of their profits in taxes, they really made a profit and paid Uncle Sam a small fee on their profits from deferring payment.

Here’s the good news buried in that outrage: These huge corporate deferral accounts can be tapped to pay for investments that will move us away from extreme inequality, generate millions of new jobs, and create future wealth through basic research and improved infrastructure.

The 2004 American Jobs Creation Act gave multinationals an 85 percent discount on offshore profits brought home. When the proposal was being discussed, proponents said it would create 660,000 jobs. But as soon as the law took effect its biggest beneficiary, Pfizer, started firing 40,000 workers. Pfizer escaped about $10 billion in taxes. Like some other companies, Pfizer used the tax savings to buy back its own stock, which increased the value of stock options held by executives.

Instead of letting companies bring this offshore money home after paying little or no tax, as Congress did in 2004, those deferrals can be ended in a way that will stimulate the economy.

This is nothing new. Since the first corporate income tax was enacted in 1909, Congress has imposed a penalty tax on corporations that hoard cash. The current penalty for domestic firms found to be hoarding cash is 20 percent on top of the 35 percent corporate tax rate. Tens of thousands of small businesses have paid this in the past century, but no large publicly traded companies have done so.

The same penalty used to apply to profits held offshore, but three decades ago Congress gave multinationals a way to defer taxes by converting profits into royalties paid to corporate affiliates. Section 531 waives the excess earnings for “a passive foreign investment company.”

Repealing the exemption for profits moved offshore would force companies to close these deferral accounts and repatriate the funds. That action cannot, as corporate lobbyists tell Congress, damage investment for two reasons. First, new laws cannot affect past behavior, only future conduct. Second, Congress can let corporations avoid the penalty tax provided the repatriated profits are invested in new plants, equipment, and research. Even better, it could also waive the penalty on repatriated funds paid broadly as bonuses to nonexecutive employees. That would generate income and payroll taxes and infuse the economy with spending money, which in turn would generate more economic activity.

Congress can also tailor the rules to make sure the money is not wasted through stock buybacks—which buoy the holdings of senior executives, who get about two-thirds of their compensation from stock and stock options—or from dividends that will flow to a minority of Americans.

In 2012 American corporations worldwide held $14.6 trillion in cash and other liquid assets, IRS data show. That cushion was so plush that it equaled the entire output of the US economy from January through Thanksgiving that year. It also totaled more than four years of federal spending.

Take away the liquid assets held by banks and other financial institutions and the figure is still bloated: almost $6.7 trillion of idle cash. That’s more than $21,200 for every man, woman, and child in America. There is no possible economic or business argument for holding that much cash idle.

Apple alone holds about $202 billion in cash, about $633 per American—far more than it could possibly need for future investments in technology, design, and manufacturing (most of which it outsources). Most of this cash is profit, which can be taxed now. Doing so would generate immediate revenue and save taxpayers interest costs going forward.

What could the government do with all the cash that’s currently stuffed in corporate mattresses?

The tax dollars could be used to fix our infrastructure, which would make businesses more efficient, prevent tragic deaths, and create thousands of jobs.

We also could hire legions of young people for summer jobs in places like government offices and recreation centers. Keeping kids occupied would lessen the risk that they will get into trouble and would help them acquire useful work skills.

We could also hire more wage and hour inspectors, reducing wage theft—a problem not limited to marginal employers, as we have seen with Walmart and other large corporations. There were more such inspectors in 1940 than there are today.

We could finance much more basic research, the key to future prosperity. Instead of funding about 16 percent of the best medical research proposals—only the most cautious ones, naturally—we could fund two, or five, times as much.

We could increase grants to college students so they can stop working during the academic year and study more. The long-term benefits of such a policy should be obvious.

We need other reforms. We need to reinvigorate our unions so workers can collectively negotiate for better pay. We should consider having the Federal Reserve buy all mortgages and reissue them at lower interest rates to borrowers with no refinance fees by consumers.

What we should not do is fall into a malaise and act as if we are powerless to rebuild a productive economy that benefits the many, not just the few—especially the economic predators.

The whole idea of the United States is that we can—and will—solve any problem we have. We ended slavery, enacted child labor laws, granted women the right to vote, and made many other advances that have enhanced our freedom, happiness, and prosperity. Now that the corrosive effects of extreme inequality are clear to virtually everyone, we should seize the moment and get beyond the mistaken policies of Ronald Reagan and his supporters.

The needs are so great that the possibilities are endless. The key policy change is to pull the cash from the corporate mattresses and make sure it gets spent rebuilding the American economy.