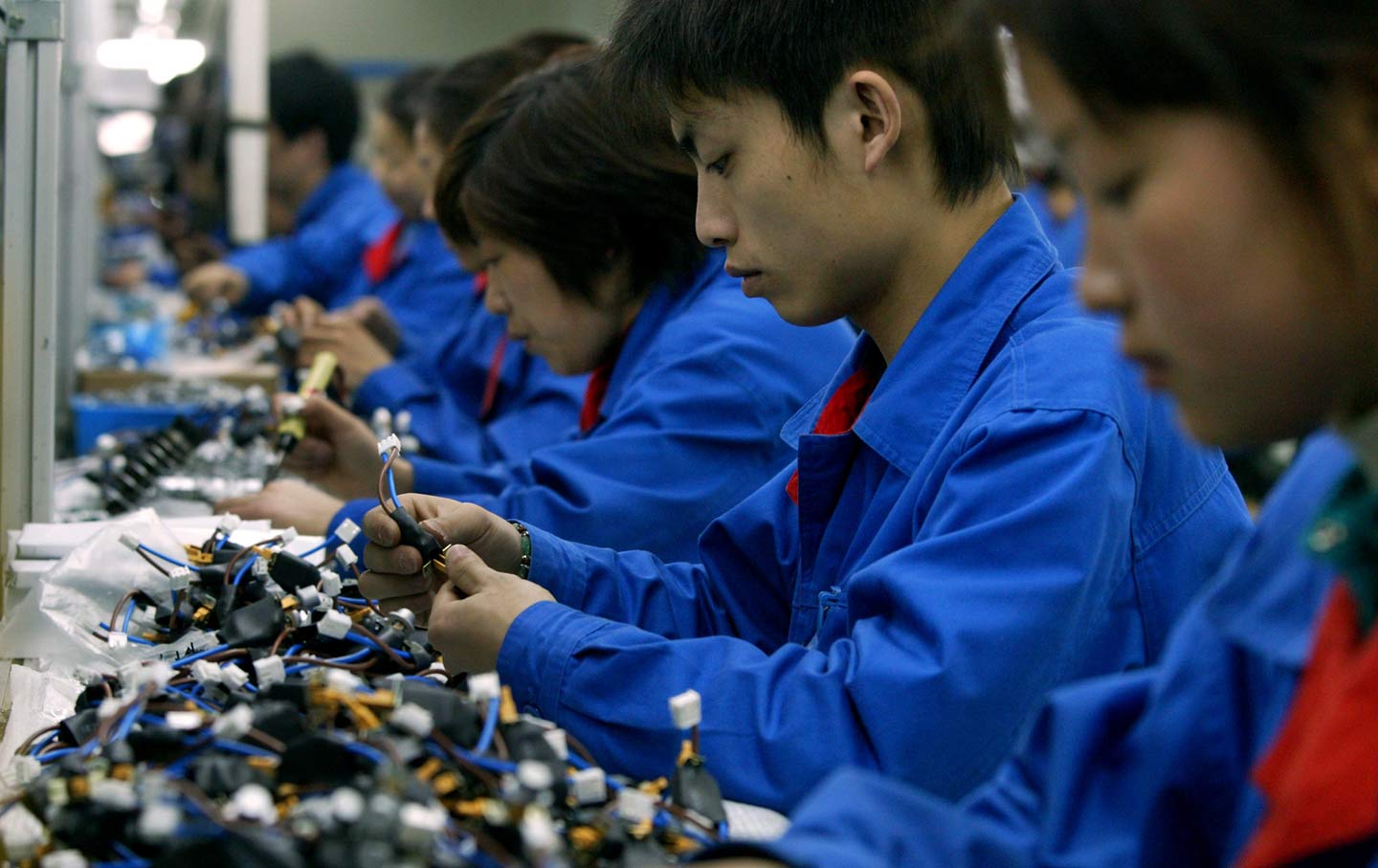 Workers assembling DVD players in a factory owned by Jiangkui Group in China, which exports to retailers like Walmart. (Reuters / Claro Cortes)

Twitter is preparing for mass layoffs. Uber faces labor law disputes in multiple countries. And millions of conventional jobs are projected to be erased by technology within years. Should we celebrate or fear the technology-driven “future of work”?

A collection of analyses of technological transformations in global labor, published by the Just Jobs Network, gives some clues about how we can navigate future labor markets that will come with no borders, and endless risks.

The report acknowledges that technology leads to disruption and displacement, but transformation doesn’t have to be brutal. If mediated by fair labor policies that balance “efficiency with equity,” tomorrow’s workers will benefit from technological innovation.

Although many core “middle-skill” sectors like accounting or health services might inevitably be “hollowed out by growing levels of automation,” technological innovations in the Global North and South are providing communities higher levels of connectivity, unprecedented access to state infrastructure, and deeper engagement with both peers and with governing institutions.

We reflexively assume, for example, that traditional manufacturing work will be rendered extinct by robots. But assembly-line factories can retool, as they’ve historically done with every structural shift in technology. Hartmut Hirsch-Kreinen’s study focuses on the potential of “human oriented design,” based on a more humane and productive workspace that actually stimulates workers, enabling active learning on site, rather than just rote repetitive tasks. This is embodied in a “human-oriented approach to work design…characterized by a high degree of operational freedom.” So manufacturing might shrink, but could also evolve toward a more democratic way of working.

Outside the workplace, social media yields possibilities for restructuring labor movements, to ensure that the frenetic on-demand workplace is checked by nimble on-demand labor activism. Kevin Lin of the International Labor Rights Forum points out that migrant-worker centers in China have over the past decade capitalized on microblogging as a platform for communicating with and organizing workers outside state-controlled union institutions—helping a worker center, for example, spread thousands of dispatches, “reports on collective labor disputes, news and state policy, and other public statements.”

In a recent wave of protests by Walmart store workers across China, Lin observes: “workers themselves used social media to discuss the contentious issue of scheduling, raise awareness about its implications and share solutions both within and across stores in different locations. Because social media is very widespread and not technically difficult, workers of varying age, education and industry are able to use social media” to exchange organizing knowledge. Social media networks have also served as platforms for real-time “legal and bargaining trainings for anywhere between dozens and hundreds of participants.”

Despite its potential for mobilization, however, Lin warns, state surveillance and censorship of political microblogging has escalated in recent years. Like leaflets or folk songs from past generations, technology is a new platform for lifting up workers’ voices, as long as they can stay a step ahead of the forces trying to silence them.

But labor digitization can also be socially destabilizing and exacerbate ingrained forms of discrimination and oppression. Digital discrimination is also increasingly prevalent. In a study of Spanish-language online labor platforms, which matched Spanish speaking Colombian teleworkers with employers in Spain, firms used digital platforms to take advantage of cheap labor in a lower-wage country. Paradoxically, incentives to outsource to poorer countries were offset with bias in compensation. While employers could use the platform to capitalize on Colombia’s lower wage rates, they also exhibited discriminatory hiring practices, which disadvantaged overseas workers, as they sought to eliminate perceived “risk.” As a result, “foreign workers are less likely to be hired” for a project than similarly qualified counterparts, or tend to be offered lower pay, because they’re unfairly perceived negatively.

As with the deregulation of international trade, one of the perils of transborder employment is the asymmetry of knowledge and economic clout. Just Jobs Network Executive Director Sabina Dewan notes, “the conversation about how to protect workers when work is offshored from a richer to a poorer country is similar to the conversation on how to protect workers when there is a trade agreement between a richer and a poorer country. We must leverage instruments we have at our disposal to strengthen national labor laws and enforcement.”

Historically, however, trade policy has tended to unilaterally serve corporate agendas. That’s why the International Labor Organization’s effort to develop a new regulatory framework for global supply chains is crucial for giving labor the leverage that multinationals have long monopolized.

Poorer countries can also prevent cloud-based labor exploitation by demanding equitable workforce investments from employers. Policymakers could negotiate job training programs with firms, to ensure that future employment of local workers is based on whether they’re also gaining skills for boosting the domestic economy, and thereby lifting the skill level of the outsourced workforce, rather than just offshoring a poor country’s top talent.

The analysis of Indonesia’s booming rideshare industry suggests that even digitally based on-demand industries, often held up as a sign of social advancement and technological sophistication, taint jobs with precarious, high-stress conditions. To resolve immediate economic needs and build workplace representation, researchers recommend using the platform to expand social safety net programs, which are being reformed currently to offer universal health and occupational insurance.” By incorporating the rideshare platform into the scheme, a large precarious workforce would have direct access to “an automatic, streamlined interface with the social welfare system to issue benefits on a larger scale.” (Meanwhile, US- and UK-based Uber drivers are similarly demanding basic labor protections and benefits.) The authors argue, “government should work directly with [transport] companies…to register all the drivers on their platforms for social protection schemes, and mandate that these companies pay the individual contribution fee for all those working full time on the platform.”

As Dewan points out, “while technology presents opportunities for accelerated development, in the absence of appropriate adjustment programs and safety nets, it can also exacerbate inequality at an accelerated pace in the Global South.” The brave new world of work has the potential for unprecedented exploitation and unprecedented empowerment. While technology is a tool for building power in the workplace, labor stills need a baseline of democracy and social equity to create space for action. The current tech explosion disrupting our jobs just means there are more people to reach and more voices that must be heard.