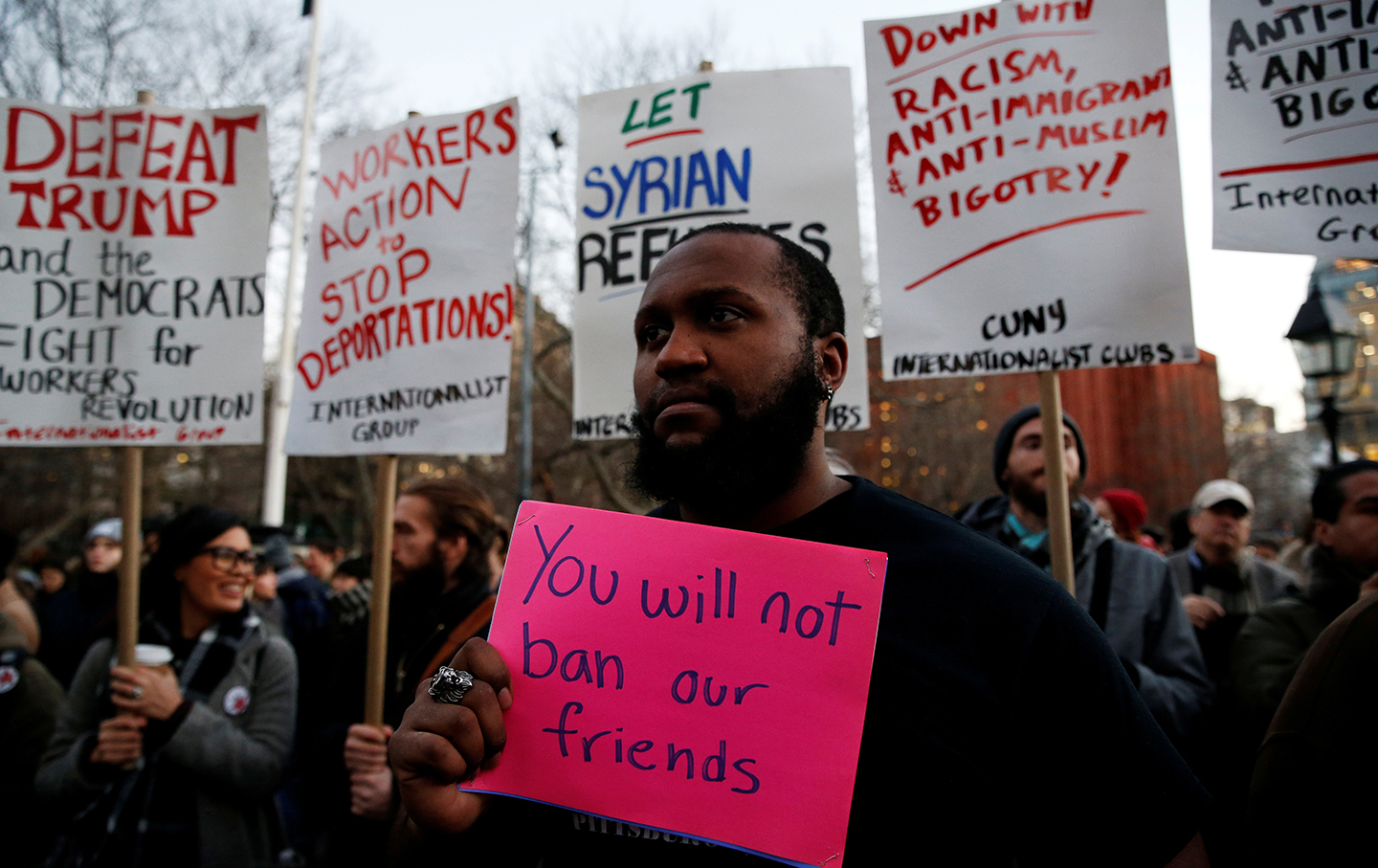 UPDATE: Thousands across the country continue to take to the streets or head to airports to protest President Trump’s Muslim and refugee ban. Click here to find an action near you.

After bracing for the worst, it’s finally here. Every day since he was inaugurated, Donald Trump has taken steps to implement more of his hate-filled, fear-mongering agenda. Just this week, he began moving forward with a ban on refugees, a wall along the Mexico-US border, a suspension of visas for anyone from particular Middle Eastern and African countries, and cuts to federal funding for sanctuary cities.

Trump’s divisive and harmful executive actions are intended to instill fear among us. Instead, they’ve inspired defiance. Thousands of people gathered at emergency rallies Wednesday night across the country, including in front of the White House in Washington, DC, and in Washington Square Park in New York City. Smaller rallies also popped up in neighborhoods such as Kensington in Brooklyn.

With so much happening, how can we continue to support immigrants, Muslims, and refugees? Here are five steps you can take to support communities targeted by the Trump administration:

1. Call Your Elected Officials, Including the President

Oh, wait. You can’t call the president because the White House has temporarily shut down its comments line. In the meantime, let the president know how you feel by way of e-mail.

More importantly, contact your senators and representatives. Call the congressional switchboard at 202-224-3121 and ask to be directed to your representatives. It is important to tell the operator why you are calling and what issue you’re calling about. Urge them to protect immigrants, Muslims, and refugees. You can also use a tool created by Make the Road NY to contact your senators on Facebook and Twitter.

2. Learn More About What’s at Stake

This is just Trump’s first week and we can no doubt expect more anti-immigrant actions in the coming months. For one, he could end Deferred Action for Childhood Arrivals (DACA). The program, signed by former President Obama, provides young people who immigrated to the United States as children of undocumented migrants provisional protection from deportation, work permits, and authorization to drive. In some states, DACA also allows students to be counted as residents of their home state and makes them eligible for in-state college tuition. It’s not immediately clear when or if Trump plans to target this population but his staunchly anti-immigrant stance definitely worries those who’ve benefited from the program. “DACA is the kind of short-term program that underlines the precariousness of executive actions, on one hand, and the perilousness of undocumented life on the other,” writes Julianne Hing at The Nation. Check out her article “Fear and Fight in the Final Days of DACA” for more on DACA.

It’s important to note that it’s not just those who’ve been granted DACA who are at risk. There are millions of undocumented people who were either not granted or not considered exceptional enough to receive temporary relief, creating an unjust binary that we must combat. “The good-immigrants-versus-bad-immigrants narrative is dangerous for all of us,” writes Cesar Vargas at The Nation. “This can’t be the narrative that we settle on, as this oversimplified distinction has the danger of tearing families apart, criminalizing day laborers, accepting the solitary detention of LGBTQ immigrants, and closing the doors on refugee children escaping violence from Central America.” Check out his article “We Can’t Throw Other Immigrants Under the Bus to Save DACA” for more.

One of these programs is IDNYC. Boasted as the largest municipal ID program in the country—over a million cards have been issued as of the end of 2016—NYC is one of about a dozen cities across the country, including Los Angeles, Detroit, Phoenix, and, soon, Chicago, to implement a municipal ID program for all residents regardless of legal status and, in some cities, gender identity. IDNYC is great in particular because in addition to providing New Yorkers with a valid government-issued ID, it provides access to cultural, financial, and health benefits to any resident over the age of 14; additional exclusive benefits are available to veterans.

Municipal IDs are supported by various immigrant organizations across the country as a way to promote human rights, foster community, and provide access to basic services regardless of citizenship. So, if you don’t already have one, sign up, and after you do, spread the word.

Many of the efforts protecting immigrants will be on the local level, so find the groups in your community doing the work. As with most small nonprofits, donations are always welcome, but if that’s not within reach, take time to learn about the organization, its active campaigns, and volunteer your time. Below are a few examples to get you started.

Arab American Association of NY (AAANY): AAANY supports and empowers the Arab Immigrant and Arab American community by providing services to help immigrants adjust to new homes and become active members of society. Their aim is for families to achieve the ultimate goals of independence, productivity and stability.

National Day Laborer Organizing Network (NDLON): NDLON works to improve the lives of day laborers in the US. With member organizations across the country, NDLON works to unify and strengthen its base in efforts to develop strategic and effective leadership, mobilization and organizing campaigns.

CAIR: The Council on American Islamic Relations has fought for the civil rights of American Muslims. There are 30 nationwide affiliates, defending, representing, and educating over 1 million Muslims in the New York area.

Families for Freedom (FFF): FFF is a multiethnic human-rights organization in NYC run by and for individuals and families facing and fighting deportation. FFF organizers are immigrant prisoners, former prisoners, their families, or those at risk of deportation. Their aim is to empower immigrant communities as communities of color, and to be a guiding voice in the fight for human rights.

Grassroots leadership: Located in Austin, Texas, Grassroots Leadership believes “no one should profit from the imprisonment of human beings” and they “work for a more just society where prison profiteering, mass incarceration, deportation, and criminalization are things of the past.” They are currently organizing Sanctuary in the Streets Training to build sanctuary networks through direct action and organizing throughout Texas.

Hebrew Immigrant Aid Society (HIAS): HIAS brings the lessons of its history and Jewish ethics and experience to our commitment to serve refugees and other displaced persons of concern around the world through the following values: Welcoming, Dignity and Respect, Empowerment, Excellence and Innovation, Collaboration and Teamwork, and Accountability. If you’re not in New York, HIAS also works with a variety of refugee resettlement organizations across the country.

Make the Road New York (MRNY): MRNY builds the power of Latino and working-class communities to achieve dignity and justice through organizing, policy innovation, and transformative education. Its campaigns include expanding civil rights, promoting health, improving housing, achieving workplace justice, improving public education, and empowering youth. It has recently launched a group called Aliados for allies of immigrants to join the fight. You can sign up for their next meeting here.

Organizations across the country continue to organize vigils, protests, and other opportunities to take your support for immigrant communities to the streets. In the meantime, here are a few petitions to sign: to demand your city become a sanctuary city and to oppose Trump’s ban on refugees.