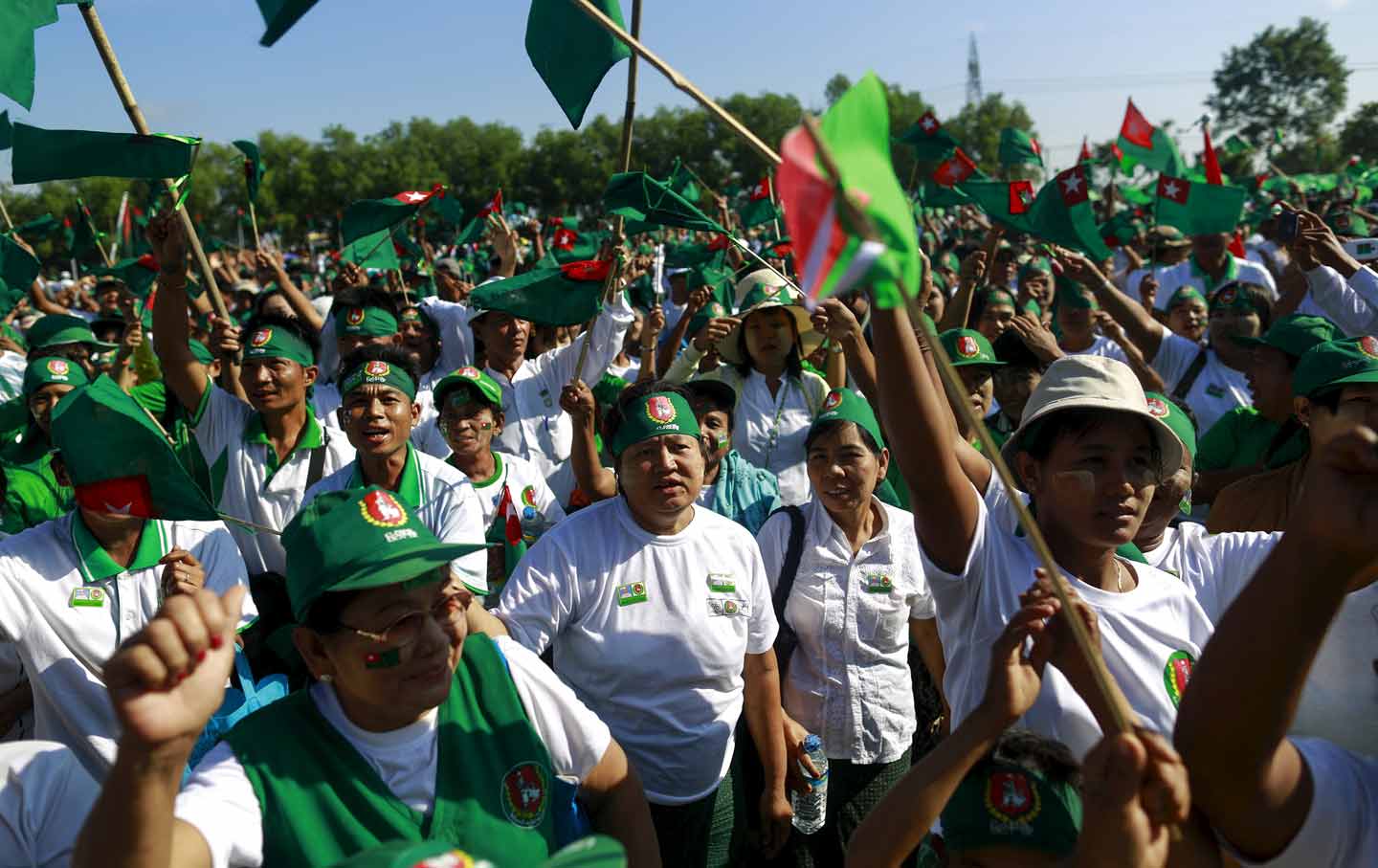 Supporters at a rally for the Union Solidarity and Development Party (USDP) on November 3, 2015. (Reuters / Soe Zeya Tun)

After almost five decades under despotic military rule, the people of Myanmar will head to the polls on November 8. But hundreds of thousands of Rohingya, a persecuted Muslim minority group, have lost their right to vote, entrenching and deepening discrimination against them. Many Muslims and almost all Rohingya seeking to compete for Parliament have been effectively disqualified.

The campaign began this past February, when the government rescinded all “white cards,” which conferred voting rights on their holders, the majority of whom are Rohingya. The list was finalized in late August.

The exclusion of the Rohingya is a direct threat to the integrity of the electoral process. Their disenfranchisement is part of a concerted state effort to appeal to a growing ultra-nationalist, anti-Muslim movement, which is a tangible threat to the future of Myanmar’s political transition. It is abundantly clear that religion has come to dominate the vote, and that the rights of the Rohingya are seen as expendable.

Shwe Maung, a Rohingya MP aligned with the ruling Union Solidarity and Development Party (USDP), was barred from running for re-election on the grounds that he was not considered a full citizen. In 2010, when he contested and won a seat in Parliament, his citizenship was intact. Following the effective removal of Shwe Maung from party politics, the Union Election Commission (UEC) decided not to approve another 15 Rohingya contenders from the Democracy and Human Rights Party. The candidates appealed and the UEC partially reversed the decision, seemingly to appease the international community’s outcry over the selective elimination of Muslim contenders.

The government is not the only party discriminating against the Rohingya and other Muslims. Opposition leaders too are pandering to the extremists, affirming their influence in the political sphere. When speaking to media only last month, Win Htein, an MP for Aung San Suu Kyi’s National League for Democracy, explicitly said that in order to secure victory, his party was unable to select Muslim candidates for “political” reasons.

An ultra-nationalist Buddhist group, the Association to Protect Race and Religion, commonly referred to as “Ma Ba Tha,” has been actively inciting hatred and violence against the Rohingya. The group pushed the government to enact a repressive package of four laws—addressing religious conversion, polygamy, interfaith marriage, and family planning—ostensibly aimed at marginalizing the Rohingya population. The “969 movement,” another conglomerate of ultra-nationalist monks, frequently uses inflammatory rhetoric against the Rohingya.

In the past, the government failed to respond to gross human rights violations against the Rohingya; now authorities are directly orchestrating their complete disenfranchisement. In 2012, reports of the rape and killing of an Arakanese woman by three Muslim men triggered deadly sectarian violence between the two groups. Authorities stood by without intervening. Since then, the situation for the Rohingya has been steadily worsening.

Approximately 140,000 now reside in squalid displacement camps within the country, where conditions are dire and movement is limited. Most don’t have access to basic sanitation or healthcare, and can’t fulfill minimal nutritional needs. Many have suffered under these conditions for as long as three years. Most worrying is that the government appears determined to make this segregation permanent. It is desperation that has prompted more than 100,000 Rohingya to board smugglers’ boats over the past three years, which has put them at the mercy of a vast syndicate of human traffickers operating between Myanmar and Thailand. Many Rohingya have lost their lives at sea. Others have recounted harrowing narratives of deprivation, violence, torture, and abuse.

It is vital that discrimination end both in policy and in practice. Key international actors, including the United States, the European Union, and the United Nations, do hold influence and should actively push the government of Myanmar to amend all legislation that promotes discriminatory policies against the Rohingya and other minorities. This should include the restoration of voting rights for the Rohingya and scrapping the so-called “protection of race and religion” bills. The government should also restore citizenship rights for the Rohingya. Myanmar should allow full humanitarian access to displacement camps, as well as either safe return for those who have fled or support for those who choose resettlement. The government should be pressured to actively fight hate speech and hate crimes, and to vigorously prosecute those who commit such crimes.

Ultimately, the key to solving this crisis is political will; unfortunately, the lack of such will is palpable today. The international community has not done enough, but the upcoming elections, which the government expects will legitimize its place in the world, are an opportunity to rectify this failure. It must be made clear that the exclusion of the Rohingya will prevent Myanmar’s integration into the international community.