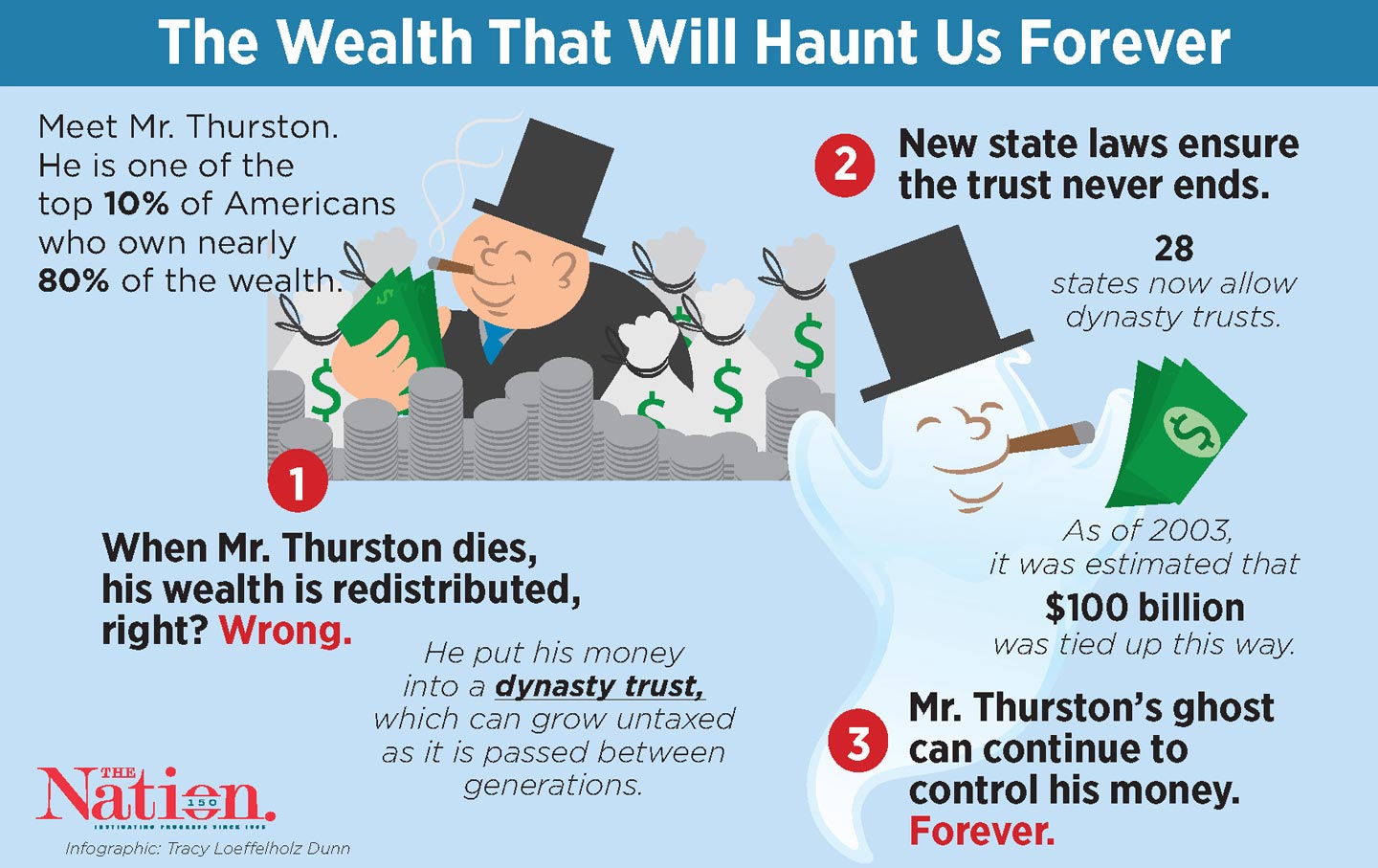 It’s a common-sense notion that society’s wealth shouldn’t be governed by ghosts. “Our Creator made the earth for the use of the living and not of the dead,” wrote Thomas Jefferson. (Also: “One generation of men cannot foreclose or burthen its use to another.”) But in our new age of inequality—the top 10 percent now own nearly 80 percent of all wealth—old concerns about wealth and inheritance are coming back from the dead.

Americans have, historically, had a simple approach to dealing with wealth after its holder dies: You can do whatever you want with your property, but not for very long. Rich people can disinherit children. They can put extreme conditions on how their successors can inherit, like requiring marriage. They can build monuments to themselves or give everything to their pets. But they can only do it so long. Eventually, time catches up with them and their estates dissolve.

Or at least that’s how it used to be. Remember that the dead can’t actually do any of this themselves because they are, in fact, dead. Instead, a trust is empowered to carry out the last wishes of the deceased. A trust is simply a legal entity that contains property; people tell a trust what they want to do, and the trust acts like a ghost, enforcing their wishes beyond the grave. But there’s a safeguard built in to prevent abuses: Trusts have been governed by something called the rule against perpetuities, which places a roughly 100-year limit on how long they can exist. This prevents people with no connection to the living world from putting restrictions on our country’s wealth.

In recent years, the safeguard of time has been eroded. As the tax expert Ray D. Madoff documents in her 2010 book Immortality and the Law: The Rising Power of the American Dead, we are experiencing a rapid rise of dynasty trusts, which massively expand the power of the dead over the wealth of the living.

To take advantage of a change made to the tax code in the 1980s, states started to radically diminish or outright remove the rule against perpetuities in the 1990s. This resulted in a race to the bottom, with states competing to see which could most effectively restructure their laws to benefit the rich. By 2003, states weakening these rules received an estimated $100 billion in additional trust business. Now, 28 states allow trusts to live indefinitely, or nearly so, creating what are called perpetual dynasty trusts.

Since they’re designed to live forever, dynasty trusts can engage in more controlling long-term activities than normal trusts, which are designed to have an end. Dynasty trusts can also avoid taxes for the term of the trust. A generous multimillion-dollar tax exemption for trusts that skip a generation can be leveraged aggressively. And since the eventual death of the trust isn’t built in, a dynasty trust can buy houses and assets that are retained for descendants, tax-free, by the trust indefinitely. The wealthy can tie up their money, outside of any public obligation or scrutiny, forever.

Trusts aren’t the only way in which the dead will exercise more control in the future. A 1998 law extended copyright and patent protections far beyond the life of individual creators, and the Trans-Pacific Partnership trade agreement is set to extend that system overseas. Forbes regularly releases a list of the top-earning dead celebrities, ranging from James Dean to Michael Jackson, and they make significantly more than most living, working Americans.

Economist Thomas Piketty warned us against this last year in his blockbuster book Capital in the Twenty-First Century. If left unchecked, he warned, the wealth of “the past tends to devour the future,” becoming more central to the functioning of the everyday economy. Though Piketty focused on abstract economic forces, it’s rules like these that will make the wealth earned in past generations distort and suffocate our economy. And these changes are just the beginning; we’ll soon see more policy innovations enabling the rich to preserve their wealth indefinitely. Indeed, if given the chance, they’ll use the law to turn the economy into a mausoleum for themselves, rather than a resource for the living.